ISSN: 2476-2296
Fluid Mechanics: Open Access
Make the best use of Scientific Research and information from our 700+ peer reviewed, Open Access Journals that operates with the help of 50,000+ Editorial Board Members and esteemed reviewers and 1000+ Scientific associations in Medical, Clinical, Pharmaceutical, Engineering, Technology and Management Fields.
Meet Inspiring Speakers and Experts at our 3000+ Global Conferenceseries Events with over 600+ Conferences, 1200+ Symposiums and 1200+ Workshops on Medical, Pharma, Engineering, Science, Technology and Business

Copyright: © 2015 Peng J. This is an open-access article distributed under the terms of the Creative Commons Attribution License, which permits unrestricted use, distribution, and reproduction in any medium, provided the original author and source are credited.

Vortex rings, i.e., closed loops of vorticity, represent a unique form of vortices. The aspect of vortex ring dynamics most relevant to propulsion is its formation, when momentum is transferred into the fluid [1]. Generation of vortex rings is believed to beneficial to propulsion. For example, it is found that force associated with vortex ring formation in a starting jet is greater than that of an equivalent steady jet, due to the over-pressure which is the increases in pressure at the nozzle exit to accelerate the otherwise still surrounding fluid in the formation process [2,3]. The contribution of overpressure makes the total ring impulse greater than that due to momentum flux alone during vortex ring formation. In addition, the benefit of vortex ring in propulsion also arises because of the entrainment of ambient fluid into the forming ring. The increase of wake vortex mass compared with a steady jet lowers the overall wake velocity and decreases the kinetic energy loss into the wake, thus increasing propulsive efficiency [4,5].

Generation of vortex ring is most commonly achieved by moving a piston through a cylinder tube submerged in a fluid, which has been used as the platform in many experimental and numerical studies. To exploit these benefits of vortex ring formation in propulsion, it is desired to generate larger, stronger rings. Using this piston-cylinder arrangement, Didden [6] first revealed that the main source of the vorticity in the forming ring is the vorticity flux from the ejected shear layer. The ring grows as the vorticity flux is entrained into it. However, there is a limit on the growth of a vortex ring from the jet shear layer. The ring formation process can be scaled by a non-dimensional formation time, defined as Tf=L/D=UT/D, where L is piston stroke distance, D the diameter of the circular jet, U the jet velocity, T the duration of the jet. For vortex ring from a starting jet in the classical piston-cylinder arrangement, the upper-limit for ring growth occurs at Tf ≈ 4 [1] and this limit is called formation number F. The forming vortex ring accepts the vorticity flux from the jet shear layer until this limit is reached. Upon reaches this limit, vortex ring pinches off, and the trailing jet would not be entrained into the vortex ring and instead forms secondary vortices due to Kelvin-Helmholtz instability [1].

In some studies [1,7,8] the limiting vortex ring growth is explained by the Kelvin-Benjamin variational principle, which states that a steady-translating axis-touching vortex ring possesses maximum energy with respect to impulse-preserving iso-vortical perturbations.It follows from this principle that the pinch off occurs when the jet shear layer is no longer able to deliver energy at a rate compatible with the requirement of the Kelvin-Benjamin principle. In other words, at the formation number F, the non-dimensional energy of the vortex ring exceeds that of the jet, i.e., αjet<αring, where α=E/I1/2Γ3/2 is the nondimensional energy E normalized to impulse I and circulation Γ. In contrast, Linden and Turner [9] argue that it is the volume of fluid from the jet that limits vortex ring growth. Circulation, impulse and energy produced by the generator can be incorporated into the ring at considerably larger amount than the critical values obtained experimentally. Both theories predicted F ≈ 4.

The importance of the limit of vortex ring growth is that upon reaching this limit, the jet from the vortex generator stops contributing to the vortex ring and thus no long be able to utilize the benefits of vortex ring in propulsion. Therefore, it is believed that this limit represents the ‘optimal’ vortex ring formation in propulsion. Krueger and Gharib [2] compared the time-integrated force due to vortex rings formed at various Tf, and showed that the force production is maximized as the limit F is reached. Linden and Turner [9] also demonstrated that the formation of a single vortex ring at the formation number produces the maximum impulse for a given energy input, and, if ejected behind a swimming body, it produces the maximum thrust. By maximizing the size of the vortex rings formed during propulsion, the efficiency of momentum transport is also optimized [5].

Though F ≈ 4 for a starting vortex ring from a constant-velocity jet in a classical piston/cylinder arrangement, it is desired to increase F to generate larger vortex ring. Rosenfeld [1] used a numerical method to simulate vortex ring formation and showed that vortex pinch-off is relatively insensitive to trapezoid-shaped piston velocity program, though the velocity profile inside the cylinder would affect the formation number Shusser [8] used an analytical model to study the effect of time-dependent piston velocity programs on vortex ring formation. Their analytical model indicates that increasing the piston velocity increases the value of F and vice versa. Therefore, one would expect higher values of F for the decreasing nozzle exit diameter and lower values for the increasing nozzle exit diameter. This was demonstrated experimentally by Dabiri and Gharib [10] whose study proved that vortex ring pinch-off can be delayed with F up to 8 by reducing the size of nozzle exit during ring formation. The value of F is also affected by the background flow outside the jet. Dabiri and Gharib [5] demonstrated modest pinch-off delays of approximately 10% in F by immersing a piston-cylinder apparatus in a uniform bulk counterflow. The counter-flow could increase F by reducing the ring velocity and maintaining the ring proximity to the jet. In contrast, a co-flow in the same direction as the jet has the opposite effect, i.e., it reduces the vortex formation number [11].

In this study, the vortex ring formation dynamics was explored numerically with the purpose of identifying the effect of piston velocity program on vortex ring formation and its pinch-off. Nitsche and Krasny [12] used the axisymmetric vortex sheet model to simulate vortex ring formation in a piston-cylinder apparatus. They compared their simulation with the experiments of Didden [6] and proved that the model captures the basic features of the ring formation process. The method is based on Prandtl's boundary layer theory that the fluid motion can be decomposed into a viscous inner flow and an inviscid outer flow. It uses ideal fluid theory to model fluid motion in the outer flow, while the dissipation in the boundary layer is neglected. However, the features of flow separation and vortex shedding are incorporated into the model. It has been used to simulated vortex dynamics in a wide range of applications [13-19]. 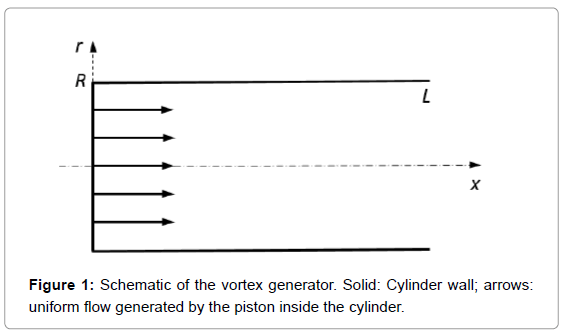 Figure 1: Schematic of the vortex generator. Solid: Cylinder wall; arrows: uniform flow generated by the piston inside the cylinder.

The mathematical description of this numerical method is summarized as follows. The formulation is similar to Nitsche and Krasny [13] and interested readers can refer to it for detail. The stream function of the flow induced by a circular vortex filament with unit strength is expressed as

and E(λ ) are the complete elliptic integrals of the first and second kind, and δ is the vortex-blob smoothing parameter, which removes the singularity in the non-regularized kernel [13]. In the simulation, it is necessary to set δ >0 for filaments on the free vortex sheet for it to roll up smoothly, with δ=0 for filaments on the bound vortex sheet to prevent ill-conditioning in the equations to solve bound sheet strength [13]. In this study, the value of the smoothing parameter is δ=0.2 for filaments on the free vortex sheet. As demonstrated in Nitsche and Krasny [13], the value of δ only affects the tightness of the spiral core, but not its location, the overall shape or the circulation of the vortex. The selected value for δ has been verified by a convergence analysis.

induced by a circular filament at

with unit strength has axial and radial components

For r=0, the velocity has the expression

Then the velocity of the flow at (x, r) is obtained by integrating along the bound and the free vortex sheet

In practice, both bound and free vortex sheets are discretized by a set of circular filaments. The bound vortex sheet is represented as a fixed sets of filaments (

) corresponding to the coordinates:

where u+ and u- are the tangent slip velocity at the outer and inner surface of the cylinder edge, respectively. The new free vortex sheet filament has a circulation of

, where Δt is the time step. The Euler’s method was used to calculate Γ. 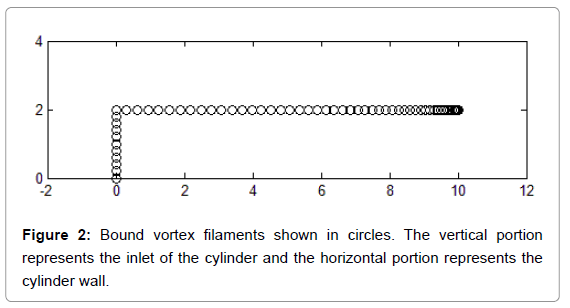 Figure 3: Validation of the numerical code by reproducing identical plots to those in Figure 8 of Nitsche and Krasny [13]. (a) axial velocity u(L, r) across the cylinder opening; (b) axial velocity u(L, r) across the outside the cylinder at the opening; and (c) radial velocity v(L, r) at the opening. Numbers in the plots are simulation time in seconds. Note: Cylinder radius R=2.5 in this simulation to be consistent with Nitsche and Krasny[13].

In this study, the radius of the cylinder is R=2. The piston velocity program Up(t) consists a power-law acceleration followed by a constant velocity, described by 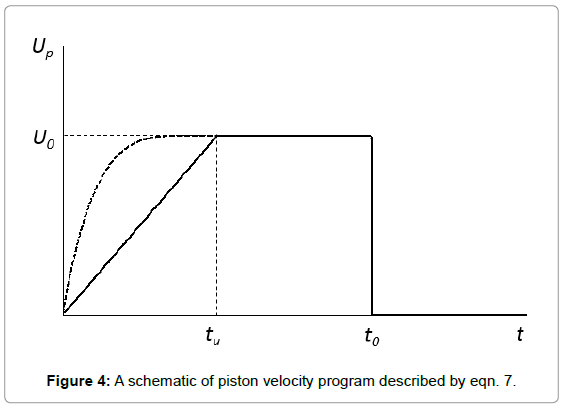 Figure 4: A schematic of piston velocity program described by eqn. 7.

The study of Nitsche and Krasny [13] was limited to formation time smaller than its limiting value, which only generates a simple vortex ring without ring pinch-off. To demonstrate that the vortex sheet method is sufficient to capture the essential features of vortex formation and ring pinch-off, the numerical method was first used to compute the flow generated by a constant-velocity jet ejected from a piston-cylinder apparatus with Tf=6, large enough for the vortex ring pinch-off based on previous studies in which F ≈ 4. The vortex sheet from the vortex generator is shown in Figure 5. Clearly the jet shear layer is smooth at small Tf but as Tf increases, instability develops in the jet shear layer and secondary vortices are generated in the trailing jet. The computed flow is consistent with the empirical result of Gharib [8]. The comparable features of vortex flow support the notion that the numerical method is appropriate for the analysis. 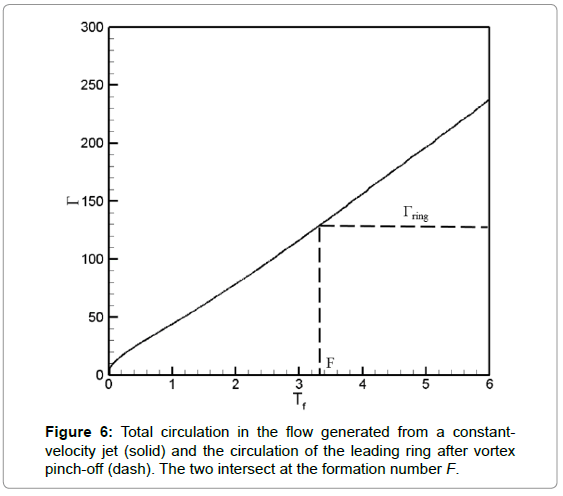 Figure 6: Total circulation in the flow generated from a constantvelocity jet (solid) and the circulation of the leading ring after vortex pinch-off (dash). The two intersect at the formation number F. 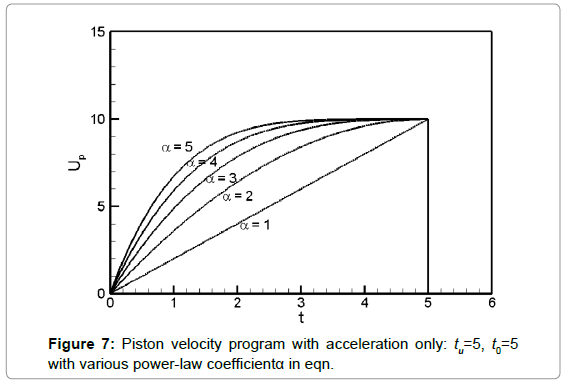 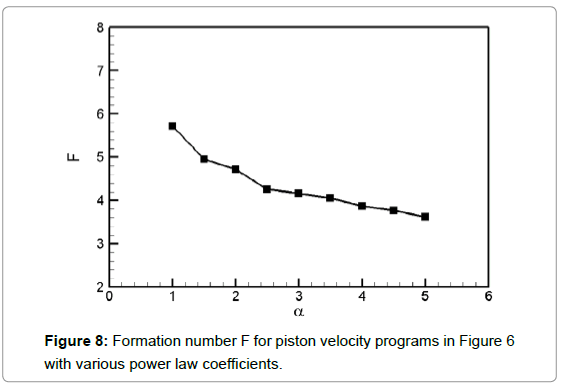 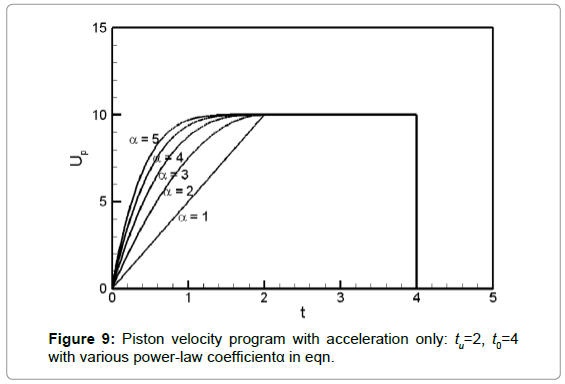 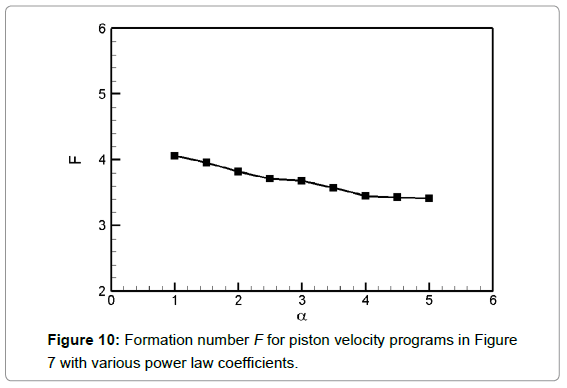 The author thanks the support from National Science Foundation grant CBET- 1449347.