ISSN: 2167-7182
Journal of Gerontology & Geriatric Research
Make the best use of Scientific Research and information from our 700+ peer reviewed, Open Access Journals that operates with the help of 50,000+ Editorial Board Members and esteemed reviewers and 1000+ Scientific associations in Medical, Clinical, Pharmaceutical, Engineering, Technology and Management Fields.
Meet Inspiring Speakers and Experts at our 3000+ Global Conferenceseries Events with over 600+ Conferences, 1200+ Symposiums and 1200+ Workshops on Medical, Pharma, Engineering, Science, Technology and Business

Copyright: © 2016 Ryan AS, et al. This is an open-access article distributed under the terms of the creative commons attribution license, which permits unrestricted use, distribution, and reproduction in any medium, provided the original author and source are credited.

The purpose is to determine the effects of 6 months caloric restriction and aerobic training (3x/wk) (CR+AEX) on c-CBL associated protein (CAP) gene expression in women with a history of GDM. CAP is involved in cell signaling and protein ubiquitination, and is linked to the development of insulin resistance. Obese (BMI=32 ± 1 kg/m2, % fat=46 ± 2, X ± SEM), sedentary (VO2 max=21.2 ± 1.2 ml/kg/min), women aged 52 ± 2 years participated in 6 months D+WL (n=10) with body composition, fitness (VO2 max), and glucose tolerance testing. Insulin sensitivity was assessed during the last 30 min of 2-hour hyperinsulinemic-euglycemic clamps (40 mU.m-2.min-1) pre and post interventions. Vastus lateralis skeletal muscle biopsies (n=7) were conducted and CAP, GLUT4 and glycogen synthase (GS) gene expression measured by RT-PCR. No change in FFM by DXA was observed, but body weight decreased 8% with losses of total body fat mass (P<0.05) and a 10% increase in VO2 max (P<0.01). Glucose and insulin areas under the curve by OGTT decreased (P<0.05). Glucose utilization during the clamp increased 27% (23.1 ± 3.8 vs. 29.4 ± 3.6 umol.kg.min-1, P<0.05). Vastus lateralis skeletal muscle CAP expression increased 21% (P<0.05) but GLUT4 did not. Results suggest that changes in CAP could be involved in the improvement in glucose metabolism with caloric restriction and aerobic training in women with a history of gestational diabetes.

Women with a previous diagnosis of gestational diabetes mellitus (GDM) have defects in insulin secretion and action [1-5]; thus, placing these women at elevated risk for obesity and the development of type 2 diabetes mellitus (T2DM) [6-10]. Not only does increased post-partum physical activity in women with previous GDM halve subsequent risk of developing T2DM [11], modest weight loss within the first year post-partum is associated with improved glucose metabolism [12]. The intent of this study is to build upon our previous work that a diet with and without aerobic exercise reduces body weight and visceral and subcutaneous abdominal fat and improves insulin sensitivity in women with a previous diagnosis of GDM [13], by examining a potential mechanism for this improvement in glucose homeostasis.

Glucose transporter type 4 (GLUT4) is the insulin-regulated glucose transporter found primarily in adipose tissue and skeletal muscle. While it is understood that stimulation of glucose uptake by insulin in adipose tissue and skeletal muscle requires translocation of GLUT4 from intracellular storage sites to the cell surface, the signaling pathways that link the insulin receptor to GLUT4 translocation remain poorly understood. There is evidence that blocking translocation of Cbl, a ubiquitin ligase, inhibits the stimulation of GLUT4 translocation by insulin [14]. While caloric restriction and exercise can affect GLUT4 protein, there is limited data examining the impact of these lifestyle interventions on C-cbl associated protein (CAP). However, in animal models, it appears that modification of diet and physical activity can influence CAP, with associated improvements in insulin sensitivity [15]. We hypothesized that in middle-aged and older women who had a previous diagnosis of GDM, caloric restriction and exercise would upregulate skeletal muscle CAP gene expression and improve insulin sensitivity.

Overweight and obese, weight stable (<2.0 kg weight change in past year) women were recruited for this study. All were sedentary (<20 min of aerobic exercise 2x/wk) between the ages of 44-64 years with body mass index (BMI) range 28 kg/m2 to 38 kg/m2 with a prior confirmed diagnosis of GDM (>10 years prior to enrollment). Women were recruited from the Baltimore region for participation. All methods and procedures for the study were approved by the Institutional Review Board of the University of Maryland, with each participant providing written informed consent. Subjects (N=11) underwent a physical examination, medical history questionnaire, fasting blood profile, 12-lead resting electrocardiogram, and a graded exercise treadmill test to exclude women who were smokers, showed evidence of cancer, liver, renal, cardiovascular, or hematological disease, and were on hormone replacement therapy. Premenopausal women reported regular menstrual cycles and not using hormonal contraception during the previous 12 months.

During the 6-month interventions, women attended weekly registered dietitian led dietary counseling classes for instruction on following the American Heart Association (AHA) Step I [16] guidelines for reducing caloric intake by 250-350 kcal/d. Women performed aerobic exercise (option of treadmills, cycle ergometers, and a walking track) three times a week for 6 months at the Baltimore VA Medical Center GRECC exercise facility. Women were instructed to exercise at ~50% to 60% heart rate reserve and progress gradually in duration and intensity until able to achieve at >60% VO2 max for 45 minutes. Each session began with a 5-10 minutes’ warm-up and ended with a 5-10 minute cool-down. Compliance to the diet and exercise classes averaged >75%.

Prior to metabolic testing, subjects were weight stabilized (<1 kg) for at least two weeks. Each woman was provided a eucaloric diet (50% to 55% carbohydrate, 15% to 20% protein, <30% fat) prescribed by a registered dietitian for two days before testing to control nutrient intake prior to the clamp and muscle biopsy. Testing occurred the morning after a 12-hr fast. Subjects underwent a 75 g, 2 h oral-glucosetolerance test [18] and samples processed as previously described [13]. Plasma glucose was measured with the glucose oxidase method (2300 STAT Plus; YSI, Yellow Springs, OH). A RIA (Millipore, St. Charles, MO) was performed to determine immunoreactive insulin. On another day, subjects underwent a hyperinsulinemic-euglycemic clamp [19] to determine peripheral tissue sensitivity to exogenous insulin. The amount of glucose infused after correction for glucose equivalent space (glucose space correction) was used to calculate glucose utilization (M) during 30 min intervals. Specific methods are described in detail elsewhere [13]. Seven subjects underwent muscle biopsies of the vastus lateralis under local anesthesia for measurement of gene expression. Muscle was immediately frozen and stored at -80°C. Using 50 mg to 80 mg tissue, total RNA was extracted from skeletal muscle and one μg of total RNA was reverse transcripted for each sample as previously described [20]. Quantitative real-time PCR (qPCR) was performed using a Light Cycler 480 real-time PCR System, and Taqman (Applied Biosystems, Foster City, CA.) gene expression primer/probe sets were used.

Statistical significance was determined by paired t-tests. Data were analyzed by SPSS statistical software (SPSS Inc., Chicago) and expressed as mean ± standard error of the mean (SEM). Significance was set at the P<0.05 level. 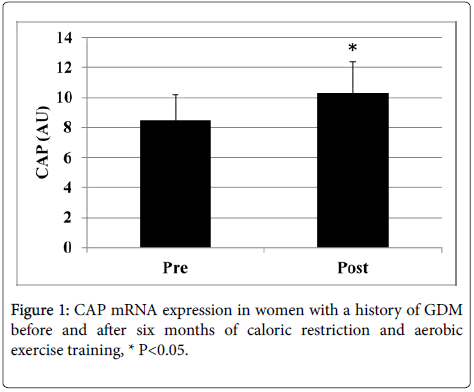 Figure 1: CAP mRNA expression in women with a history of GDM before and after six months of caloric restriction and aerobic exercise training, * P<0.05.

Our prior data indicate that considerable insulin resistance is present in older overweight and sedentary women with a previous diagnosis of GDM [21] and that six-months of caloric restriction and aerobic exercise reduces body weight, abdominal (both visceral and subcutaneous) fat, and improves insulin sensitivity in older women with previously diagnosed GDM [13]. We now demonstrate that increased skeletal muscle CAP and GS expression following CR+AEX may be a potential mechanism for these observed improvements in glucose metabolism.

CAP is primarily expressed in tissues (skeletal muscle, fat) that undergo insulin stimulated glucose transport. It has been suggested that CAP signaling from the insulin receptor is critical to the insulin activation of glucose transport. Cbl is translocated to the plasma membrane after insulin stimulation [22], while fasting results in a decrease in CAP and Cbl protein expression in adipose tissue without a change in skeletal muscle [23]. It is suggested that the CAP-Cbl pathway works synergistically with the PI3K pathway to stimulate GLUT4 translocation in skeletal muscle [24]. CAP in adipocytes increases with insulin sensitizers, such as thiazolidinediones and metformin [25,26]. In rodents, four weeks of a high-fat fed diet and four subsequent weeks of exercise training, did not change skeletal muscle plasma membrane fractions of c-Cbl but exercise training increased CAP protein concentrations [24]. In another study from the same group, components of the CAP/c-Cbl signaling cascade including CAP and TC10 protein levels at the plasma membrane increased in obese rats after 7-weeks of treadmill training [15]. Thus, these results corroborate our results that exercise training can reverse impairments on the CAP/c-Cbl. Limited data is available on the role of the CAP-Cbl pathway following weight loss and exercise in humans, suggesting that future investigation is necessary to fully comprehend the role of the CAP-Cbl pathway on insulin action.

We previously have shown several factors to be associated with insulin sensitivity in women with a history of GDM, including age, total body fat mass, visceral fat, and subcutaneous abdominal fat [13,21]. We show that six months of caloric restriction plus exercise training can modify these factors, except age, and improve glucose tolerance, and glucose utilization, and reduce fasting insulin and insulin area under the curve [13]. However, in the current study we did not find relationships between changes in CAP gene expression and changes in glucose metabolism, perhaps due to the small sample size.

Although this study had several notable strengths such as the comprehensive phenotyping and state-of-the-art determination of insulin sensitivity, the study was limited in sample size for the muscle biopsies and the lack of measurement of protein expression. Future studies could be designed to examine the upstream and downstream regulators of c-CBL associated protein to better understand its role in insulin action in women with a previous diagnosis of GDM.

Our appreciation is extended to those women who participated in this study. We are grateful to clinical staff and the nurses in the geriatrics services for technical assistance and to Keisha Galloway for laboratory assistance. This study was supported by funds from: Baltimore VA Medical Research Service, Senior Research Career Scientist Award, NIH grants K01-AG00747, RO1-AG19310, P60- AG12853, and Baltimore Geriatric Research, Education, and Clinical Center.