Copyright: © 2016 Khalid S. This is an open-access article distributed under the terms of the Creative Commons Attribution License, which permits unrestricted use, distribution, and reproduction in any medium, provided the original author and source are credited.

Constant Instantaneous Power Control Technique for extracting reference currents for shunt APF (active power filters) have been modified using Artificial Neural Network and Fuzzy logic control and their performances have been compared. The acute analysis of different comparisons of the compensation capability supported total harmonic distortion and speed is going to be done, and suggestions are going to be given for the selection of technique to be used. The simulated results using MATLAB model are shown, and that they can without doubt prove the importance of the projected control technique of aircraft shunt APF.

Non-linear loads cause the unbalancing, harmonics, distortion etc into the power arrangement and these unwanted problems turn out profusely of problems within the system. Whenever application of such loads can increase, source gets distorted and unbalanced. These currents foul the supply purpose of the utility. Therefore, it’s necessary to compensate unbalance, a harmonic and reactive element of the load currents. Whereas once source is unbalanced and distorted, these problems worsen the system [1-3].

Today, the soft computing techniques like Fuzzy algorithms, ATS algorithms, Genetic Algorithm [4-12], particle swarm optimization [13], ANN [14-18] applied in every machinery and filter devices for optimization of the system applied or in the various control system.

In this paper, ANN based mostly and fuzzy logic (FLC) controller are wont to mend the whole performance of active filter for reduction of harmonics and other related drawbacks generated into the balanced, unbalanced and distorted system because of the nonlinear loads [1]. The simulation results clearly show their effectiveness. The simulation results non-heritable with the new model are abundant improved than those of traditional methodology.

The paper has been described during a successive manner. The APF define and also the load underneath contemplation is mentioned in Section II. The control algorithmic rule for APF converses in Section III. MATLAB/Simulink based mostly simulation results are conferred in Section IV, and eventually Section V concludes the paper.

The aircraft power system is a three-phase power system with the source frequency of 400 Hertz. As depicted in Figure 1, Shunt Active Power Filter gets better the power quality and balances the harmonic currents in the source supply system [19-23]. The APF is realized by using VSI connected at the PCC to a common Direct Current (DC) link voltage [24-27]. The proposed control of APF depends on constant instantaneous power control (CIPC) strategy, and it has been optimized for artificial Neural Network and Fuzzy Logic Control.Constant instantaneousPower Control strategy has been discussed in brief in this section. The following section also deals with the primary application of ANN and FLC in the control schemes [24,28,29].

The control illustration of APF using CIPC approach is exposed in Figure 2. Four low pass filters have been out in the open in the control block. Three are with cut off frequency of 6.4 Kilo Hertz. They are useful to filter the voltages. Even as the other one is used for the power p0. The phase voltages cannot be unswervingly used in the control block. The grounds are the instability matter. The voltage harmonics beyond the 6.4 kilo hertz in the array of resonance frequency are blocked using the low pass filters. Application of ANN based control

As shown in Figure 3, the ANN has seven inputs (va, vb, vc, dc voltage error, ia, ib, ic) and three outputs (ira, irb, irc) as observed in the different strategies. The reference current generation unit and dc voltage controller unit has been modeled and their individual and simultaneous effect has been observed. The fuzzy logic control has been employed in the dc voltage control round of the APF. In fuzzy, the plan employs centrifugal defuzzification manner. There are 2 inputs; error and its derivative and 1 output, that is the command signal. The two inputs uses Gaussian membership functions while the output uses triangle membership function. Table 1 explains the fuzzy control rule and Figure 4 illustrates the membership functions used. The proposed scheme of APF is simulated in MATLAB environment to estimate its performance. Three loads have been applied together at a different time interval to check the affectivity of the control schemes for the reduction of harmonics. A small amount of inductance is also connected to the terminals of the load to get the most effective compensation. The simulation results clearly reveal that the scheme can successfully reduce the significant amount of THD in source current and voltage within limits.

When all three loads are connected as per the configuration discussed in the previous section, Total harmonic distortion (THD) of source (supply) current has been observed as nine point five percent and THD of source (supply) Voltage were one point five five percent. In this duration, the APF is not connected. The results are shown in Figure 5. By observant this information, we are going to merely understand that they are not within the limit of the international standard. The performance of APF under different loads connected, when utilizing ANN Control has been discussed below for the control strategy given below. 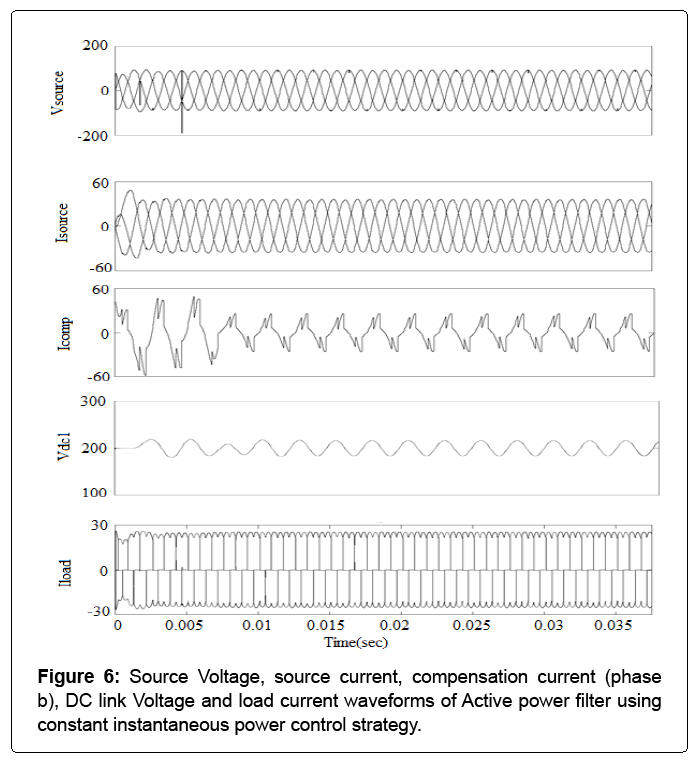 The aberration in dc voltage can be acutely apparent in the waveforms. As per claim for accretion the compensation current for accomplishing the load current demand, it releases the energy, and after that it accuses and tries to achieve its set value. If we carefully observe, we can acquisition out that the compensation current is, in fact, accomplishing the appeal of load current, and afterward the active filtering the source current and voltage is affected to be sinusoidal.

THDs of source current and source voltage have been found 2.84% and 1.78% respectively after making observations from the simulation results shown in Figure 7. The waveforms for source voltage and source current have become sinusoidal at t=0.0066 sec. Compensation time is 0.0066 sec. The waveforms of compensation current, dc capacitor Voltage, and load current have been shown in Figures 6 and 7. Waveforms show the variations in dc capacitor voltage. Whenever the demand for high load current comes, it releases the energy that in turn increases the compensation current. Later on, it charges and tries to regain its previous set value. By making a simple observation, we can say that compensation current is fulfilling the demand of load current. After the active filtering, the source current and voltage is forced to be sinusoidal. THDs of source current and source voltage have been found 2.33% and 1.03% respectively after making observations from the simulation results shown in Figure 8. The waveforms for source voltage and source current have become sinusoidal at t=0.0044 sec. Compensation time is 0.0044 sec. The waveforms of compensation current, dc capacitor Voltage, and load current have been shown in Figure 8. Waveforms show the variations in dc capacitor voltage. Whenever the demand for high load current comes, it releases the energy that in turn increases the compensation current. Later on, it charges and tries to regain its previous set value. By making a simple observation, we can say that compensation current is fulfilling the demand of load current. After the active filtering, the source current and voltage is forced to be sinusoidal. Comparative analysis of the simulation results

From the Table 2, we can easily say that Constant Instantaneous Power Control Strategy using Fuzzy Logic Controller (CIPC-FLC) has been found best for current and voltage harmonic reduction. When these results have been compared based on compensation time, it has been also found that CIPC-FLC strategy is also fastest one.

This paper has done an acute analysis of traditional, ANN and Fuzzy Logic control for shunt APF in aircraft power utility of 400 HZ. Optimum selection of control strategy based on compensation time and THD has been suggested. Overall Constant Instantaneous Power Control Strategy using FLC (CIPC-FLC) has been observed as an optimum choice. Constant Instantaneous Power Control Strategy’s performance has been improved, which itself an achievement for the case of optimization in traditional strategies.

The aircraft system parameters are [1]: