Copyright: © 2016 Rodríguez-Salas N, et al. This is an open-access article distributed under the terms of the Creative Commons Attribution License, which permits unrestricted use, distribution, and reproduction in any medium, provided the original author and source are credited

A 49 years old woman was diagnosed of bilateral and multicentric infiltrating ductal breast carcinoma with a luminal A phenotype (Figure 1) and blastic bone metastatic spread. She had a very good response to hormonotherapy and monthly zoledronic acid without visceral spread or bone events for three years. Then she consulted because of progressively asthenia, anorexia, nausea, dizziness, orthostatic, occasional abdominal pain, increased thirst and frequent urination and altered sleep-wake cycles. On physical examination, she appeared pallid without any other remarkable finding.

A 49 years old woman was diagnosed of bilateral and multicentric infiltrating ductal breast carcinoma with a luminal A phenotype (Figure 1) and blastic bone metastatic spread. She had a very good response to hormonotherapy and monthly zoledronic acid without visceral spread or bone events for three years. Then she consulted because of progressively asthenia, anorexia, nausea, dizziness, orthostatic, occasional abdominal pain, increased thirst and frequent urination and altered sleep-wake cycles. On physical examination, she appeared pallid without any other remarkable finding. She was urgently referred to an endocrinologist with the suspicious diagnosis of diabetes insipidus, central hypothyroidism (since the level of thyrotropin was normal) and severe secondary cortical adrenal insufficiency (low serum cortisol and normal level of ACTH). Endocrinologist indicated a magnetic resonance imaging (MRI) of the brain that showed a gadolinium-enhancing mass measuring 1.2 cm of the pituitary-hypothalamic axis, without other pathologic findings at other brain levels.

The systemic study was completed with a chest-abdominal and pelvis CT scan that showed stable multiple blastic bone metastasis without any other signs of disease progression, either in bone or visceral. The differential diagnosis of the intracranial mass was as follows: breast metastasis, other neoplastic disorder such as lymphoma or a primary tumour of the pituitary or hypothalamus. Less likely possibilities would be sarcoidosis, tuberculosis, autoimmune destruction and others.

The patient initiated treatment with dexamethasone, desmopressin acetate with a very good and quick clinical and biochemical response.

The patient was later referred to the neurosurgeon, with the aim to provide relief of symptoms resulting from mass effect of the tumour, and also to establish a histologic diagnosis of the mass, to improve local control, and perhaps to provide a potential benefit of survival. She underwent a frontal craniotomy and partial excision of the hypothalamus mass was made without any surgical complications.

The histopathological exam of the surgical biopsy specimen revealed a triple negative ductal carcinoma because of the negative results for the exam of oestrogen and progesterone receptors and negative immunostaining of human epidermal growth receptor type 2 (HER2) (Figure 1). 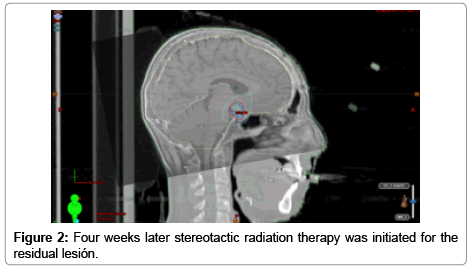 On a follow up visit the brain MR control, eight weeks under complete de radiosurgery show partial response of the hyphotalamic mass, complete response of the symptoms, and continue with the previous systemic therapy, without any other intracranial lesion or evidence of systemic progression with a follow up of two years.

With a low frequency hypopituitarism is caused by malignant primary or metastatic tumours. Metastasis in this location is also an unusual manifestation of systemic cancer, with a reported incidence of 1% to 3.6% [1].

Breast and lung cancer are the most common tumours that metastasize to the pituitary gland. The posterior pituitary may be more prone to metastases because of its direct systemic supply of arterial blood, whereas the adenohypophysis receives blood from the hypophyseal portal system. Some researchers have reported a greater predilection for the involvement of the anterior pituitary in breast cancer, and they are often asymptomatic [2]. Nevertheless, in symptomatic cases diabetes insipidus is the most frequent finding [3]. Other symptoms could be headache, visual-field defects and those related with anterior pituitary dysfunction. In this cases it is prioritary to look for corticotropin deficiency which can lead to adrenal crisis and death, if it is no earlier recognized [4,5].

Breast cancer is a complex and heterogeneus neoplasm. Gene expression profiling studies have identified at least four major breast cancer subtypes: luminal A, luminal B, HER2, and basal-like. These subtypes differ in regard to their patterns of gene expression, clinical features, response to treatment, and outcome [6,7]. Luminal A cancers tend to respond to endocrine therapy such as in our patient. Response to the luminal cancers to chemotherapy is variable, it is usually indicated in cases of visceral spread or in hormone-refractary cases. The basallike breast cancers show high expression of basal epithelial genes and basal cytokeratins, low expression of ER and ER-associated genes as well as low expression of HER2. They approximately constitute 15% of all breast cancers. Basal-like cancers have a poor prognosis and are not amenable to treatment with either endocrine therapy or trastuzumab because they are hormone receptor-negative and do not show HER2 overexpression or amplification. It has recently been reported the implication of BRCA-1 loss of function in this subtype of breast cancer [8]. Our patient was tested for BRCA 1 and BRCA-2 genes and they didn’t show any significant mutation pattern.

Nowadays the study of the metastatic lesions when the breast cancer relapse is so useful. It has long been recognized that the hormone receptor status of metastases does not always correlate with that of the primary tumour, with approximately 20% to 30% conversion rate from ER-positive to ER-negative and much less frequently from ERnegative to ER-positive at relapse [12-15]. Indeed, the receptor status of the metastasis may be more predictive of response to therapy. One small study showed that, although 74% of patients with ER-positive primary tumours whose recurrent tumours retained ER expression responded to endocrine therapy, only 12% of patients with ER-positive primaries and ER-negative metastases likewise responded [8]. Similar discordances between hormone receptor content of primary breast cancer versus metastasis have also been recently documented in several other studies [16,17] and loss of ER was associated with a significantly shorter median survival.

Furthermore, the metastatic tumor ER status was shown to be a better predictor of survival than the primary tumor ER status. In biopsies from patients who developed resistance to tamoxifen, changes in hormone receptor status, as well as in other signalling pathway molecules, such as HER2, have also recently been documented [18]. Similarly, to ER, and perhaps even at a higher rate, a significant proportion of PR-positive tumours also lose PR expression in their metastasis [19], and loss of PR in sequential biopsies, particularly with intervening endocrine therapy, is associated with poorer survival as compared with patients retaining PR [20]. Nevertheless, trials in metastatic disease suggest that these tumours still benefit from endocrine therapy [21], although some data suggest that they may have a somewhat worse clinical outcome than ER-positive tumors [22].

In a pooled analysis of two prospective studies that included 289 patients, the rates of discordance in ER, PR, and HER2 between the primary and recurrent disease were 13%, 31%, and 5.5%, respectively. The results of the biopsy altered management in almost 14% of the patients [23]. In a separate prospective observational study that included 178 women, the conversion rate between primary and metastatic was similar to the findings above, with a discordance rate of 13, 28, and 3 percent for ER, PR, and HER2, respectively. Among those patients who demonstrated a conversion in receptor status, ER (n=22) and PR (n=47) status converted from positive to negative (78% and 72%, respectively), and for HER2 status (n=5), all went from positive to negative [24].

Different explanations have been suggested for this clinical and pathological discordance in the evolution of the breast cancer disease, including (a) intratumor heterogeneity of breast cancer, which can lead to clonal selection of different clones with distinct hormone receptor properties that can change over time; (b) changes within single cells themselves as an adaptive mechanism for treatment; (c) tumour dedifferentiation with the development of metastasis; or (d) technical laboratory difficulties in hormone receptor assessment of small biopsy specimens [25]. Regardless of the cause, the high level of this discordance between both ER and PR for primary and metastatic disease emphasizes the necessity for the integration, at progression, of a sequential biopsy and biomarker analysis (improved decision-making in the management of advanced breast cancer).

Clinical management of central nervous system metastatic spread of breast cancer in nowadays in change and needs a multidisciplinary team [26-27]. Three prospective, randomized trials have been conducted to evaluate the role of neurosurgery in patients with brain metastases. The first trial, reported by Patchell et al. [28], randomly assigned 48 patients with a single brain metastasis (6% with a breast primary) to either surgery followed by whole-brain radiotherapy (WBRT) versus WBRT alone. Patients in the combined-modality arm achieved better local control (20% vs 52%; p: 0.02), improved median duration of functional independence (38 vs 8 weeks; p: 0.005), and longer overall survival (40 vs 15 weeks; p: 0.01), compared to the patients who received WBRT alone. These findings were replicated in a study of 63 patients (19% with breast primaries) led by Noordijk et al. [29], in which patients treated with surgery and WBRT achieved prolonged survival (median 10 vs 6 months; p: 0.04) and functionally independent survival (7.5 vs 3.5 months; p: 0.06) compared to patients treated with WBRT alone. Of note, only patients with stable or absent extracranial disease appeared to derive a survival benefit from surgery; patients with progressive extracranial disease experienced a median survival of only 5 months irrespective of the allocated treatment. A third study reported no difference in either survival or functionally independent survival with the addition of surgery to WBRT [30]. In contrast to the first two trials, nearly half of the patients in this study were enrolled with coexisting extracranial metastases, and approximately 40% of patients had a Karnofsky performance status of 70% or less at study entry. In addition, the presence of a single brain lesion was categorized based on CT rather than MRI (which could have missed multiple lesions), and 10 out of 43 patients randomly assigned to radiotherapy underwent surgical resection at some point in their disease course, which may have further confounded the results.

In addition to the randomized trial data, the positive impact of surgical resection on survival has also been observed in large, retrospective studies and retains its significance even after adjusting for other prognostic factors [31]. Although there have been no trials of surgical resection limited to breast cancer patients, the totality of the data strongly indicates that surgical resection should be considered in patients with a single metastasis and stable extracranial disease [32].

Radiosurgery with the novel radiotherapy techniques is a very good alternative to those patients with unique or few lesions that couldn’t be totally resected. In our patient, neurosurgery resection was incomplete due to the severe sequellae of a complete intent of remove of the hypothalamus lesion. The residual lesion was effectively treated with stereotactic radiosurgery [33].

In summary, we present a case of low risk metastatic breast cancer patient with a very good response to endocrine therapy for three years, but with an unusual clinical evolution, with a unique metastasis in the pituitary-hypothalamic axis and a critical clinical presentation. The biopsy of the CNS metastasis was mandatory in order to establish a correct diagnosis and to redefine the biological behaviour of the breast cancer and also base a more customized prognosis and therapy approximation. Multidisciplinary management of the patients is mandatory.