Spectrophotometric Determination and Commercial Formulation of Tebuconazole Fungicide after Derivatization

Copyright: © 2016 Khan KA, et al. This is an open-access article distributed under the terms of the Creative Commons Attribution License, which permits unrestricted use, distribution, and reproduction in any medium, provided the original author and source are credited.

A spectrophotometric method has been developed for the determination of tebuconazole fungicide formulation. The method is based on the complexation reaction of ferric chloride with tebuconazole fungicide in acidic media and the purple colored complex was studied at 530 nm. The reaction conditions and other analytical parameters were optimized. A linear calibration curve between absorbance and concentration over the range from 0.2 to 20 μg mL−1 was obtained with molar absorptivity of 2.1 × 104 L mol−1 cm−1. The limit of detection (LOD) and limit of quantification (LOQ) were found to be 0.05 and 0.2 μg mL−1 respectively. The proposed method has been successfully applied for the analysis of commercial formulation of tebuconazole fungicide. The recoveries of the method were found to be in the range of 92.16 ± 0.06% to 96.66 ± 0.18%.

The production of good quality of crops is essential for the existence of human being. Many micro-organisms have spoiled crops which lead to worldwide food shortage. Among these micro-organisms fungi play a critical role in decaying crops [1-3]. Fungicides work in a variety of ways, but most of them damage fungal cell membranes or interfere with energy production within fungal cell [4,5]. Fungicides have changed the nature of agriculture. Researchers all around the world are involved in the synthesis of fungicides of new formulation in order to meet the modern world needs [4-6]. Tebuconazole is a fungicide commonly used in agriculture. Tebuconazole [1-(4-Chlorophenyl)-4,4- dimethyl-3-(1,2,4-triazol-1-ylmethyl)pentan-3-ol] is a triazole fungicide. The triazole (tebuconazole) fungicide have increased the persistence of disease control, an effect that leads to prolonged green leaf retention and extended grain fill compared to traditional fungicides [7-9]. Tebuconazole has novel mode of action, and are very safe from environmental point of view. Due to its fungicidal action the inhibition of mitochondrial respiration in fungi occurs and stopping their energy supply [10,11]. The plants for which tebuconazole are more effective are cereals, vines, fruits and vegetables, rice, turf and ornamentals [2,3]. Various studies on tebuconazole have been investigated by using the HPLC/MS, gas chromatography in combination with electron capture detection, gas chromatography [12,13], micellar electro kinetic chromatography [14,15], spectrophotometric methods reported for the metribuzin determination is based on its complexation with copper [16]. The present method is based on spectrophotometric determination of tebuconazole fungicide by reacting with ferric chloride in alkaline media through complexation reaction.

Working of standared solution containing tebuconazole in the range of 0.2-20 μg/ml were transfered quantitavely into reaction flask followed by the addition of 0.4 ml Ferric chloride 5% and 0.4 ml of NaOH (5M) solutions. The absorbance of the coloured product was measured at 530 nm against reagent blank.

Determination of teboconazole in commercial formulation

Known amount of commercial formulation containing tebuconazole was taken and diluted with methanol upto 50 mL and was filtered to remove any insoluble impurities. The solutions were then analyzed by the proposed method.

In the present study spectrophotometric determination of tebuconazole fungicide was carried out. For this purpose tebuconazole is first converted into a purple colored complex by reacting it with ferric chloride (III) in alkaline media. The proposed reaction mechanism is given as, 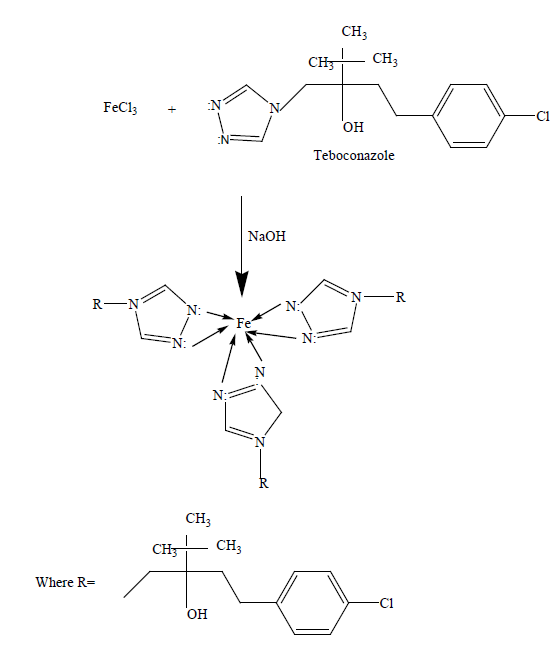 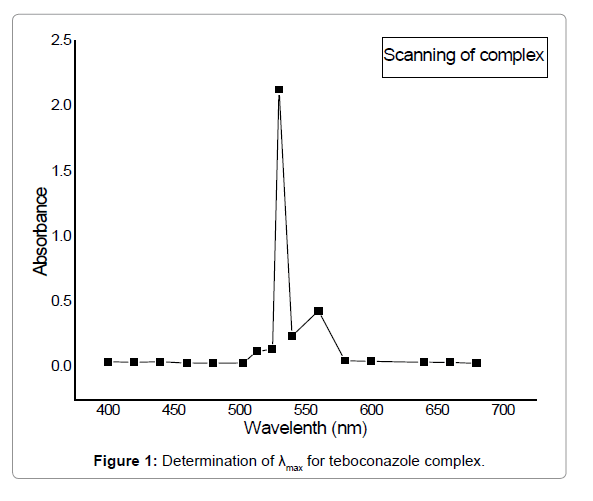 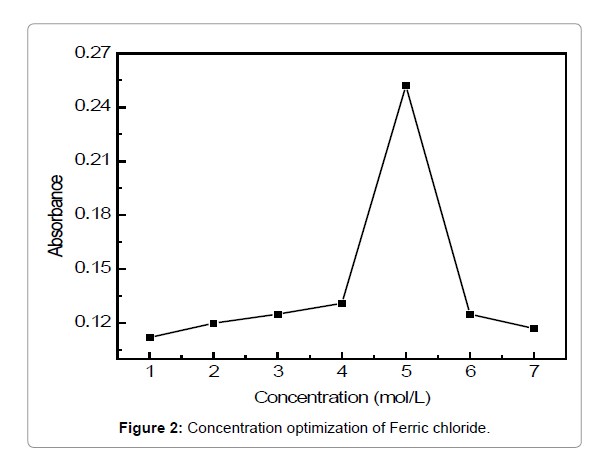 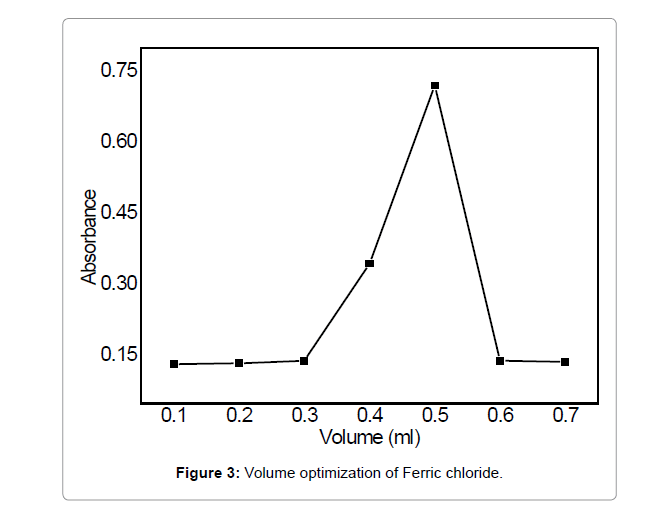 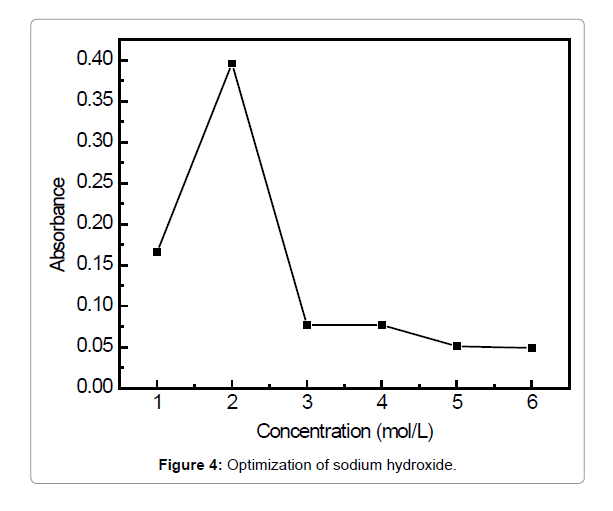 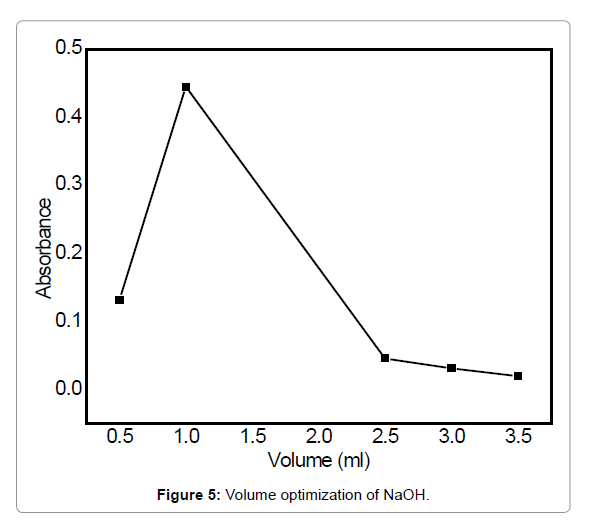 To check the stability of the final reaction product, the effect of time was studied upto 3 days (72 h) with the interval of 2 h. The colored reaction product was found to be stable for about 2 days (48 h).

The absorbance concentration curve was found linear over the concentration of 0.2-20 μg mL-1. The molar absorbitivity of the resulting yellow coloured product was found to be 2.1×104 Lmol-1 cm-1 with limit of detection (3s/b) and quantification(10s/b) of 0.05 and 0.2 μg mL-1 respectively, where s is the slope and b is the intercept. For more confirmation of the analtical applications of the proposed method, the standered addition method was applied to a commmercial product. The recovery studied were carried out after adding known quantities of authentic standared to the pre-analyzed formulation. The percentage recoveries were in the range of 93.68-96.66%. The value obtained for commericial formulation was comparable with the labeled value. 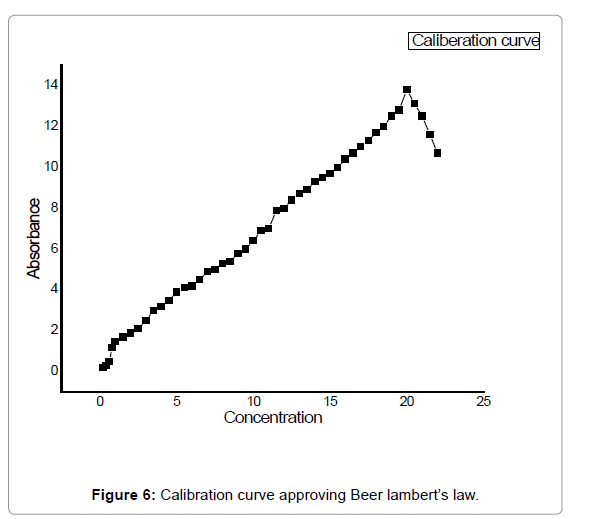 Table 1: The optimum conditions for the highest absorption due to maximum colored product formation were investigated.

The proposed method described for spectrophotometric determination of tebuconazole is simple, rapid and cost-effective as compared to the reported chromatographic methods for determination of tebuconazole. The color of the final product is stable at room temperature for two days and the limit of quantification shows that the developed method can be used to determine tebuconazole at lower concentration in different samples. The optimum conditions for the highest absorption due to maximum colored product formation were investigated.