Copyright: © 2016 Shrivastava, et al. This is an open-access article distributed under the terms of the Creative Commons Attribution License, which permits unrestricted use, distribution, and reproduction in any medium, provided the original author and source are credited.

In this paper, the work of quantum computing and how this technology is helpful in developing future high speed processing reversible logic gates with the help of QCA. This paper describes the various reversible gates in brief by using quantum dot cellular automata. Simulation result and design of Feynman Gate is projected with the use minimum number of quantum cells in multilayer which facilitate the circuit to add more combinatorial circuit in parallel when required corresponding to the Feynman. Several researchers focuses their research on design and synthesis of efficient reversible logic gates. This paper presents the study of quantum computing and combinational circuit of some basic reversible logic gates verified through simulation using QCA designer.

The essential elements of quantum computing originated with Paul Benioff, working at Argonne National Labs, in 1981. He theorized a classical computer operating with some quantum mechanical principles. But it is generally accepted that David Deutsch of Oxford University provided the critical impetus for quantum computing research. In 1984, he was at a computation theory conference and began to wonder about the possibility of designing a computer that was based exclusively on quantum rules, then published his breakthrough paper a few months later. With this, the race began to exploit his ideas. However, before we delve into what he started, it is beneficial to have a look at the background of the quantum world [1].

According to Moore’s law, today’s power is doubling every 2 years or more correctly every 18 months. As of 2015 the commercially available processors processing the highest number of transistors is the Intel’s 18-core Xeon Haswell-EP with over 5.5 billion transistors.

In the case of graphic processors, nvidia processors lead which offers computers accelerators in which the number of transistors exceeds 7 billions. All these type of device is amenable and undoubtedly contributes to the development of science and technology but quantum computing can offer to cross the extents of classical computing. No straight solutions or enhancement can compare with the endless possibility offered by the laws of quantum mechanics. The quantum mechanical states of the elementary particles like transistors or switches can be described in 0’s and 1’s (Figure 1).

Figure 1: The spin motion of electron storing o (spin down) and 1 (spin up).

Here the state describe by the zeroes and ones is the internal angular momentum of the particle known as its ‘spin’. Although it’s not possible to describe this particular feature through the use of classical mechanics. It can be like in two magnetic parts capable of deviations. When the part is pointed up, the state can be described by value of 1. However when it is pointing down, it can be described by the value zero. In other words, spin up co-response to the turned “ON” switch and spin down co-response to the turned ‘OFF’ switch. Using this analogy, we can describe the defined quantum states with the use of binary system much like the classic computer. However beyond this point all similarity ends [2].

Note: One of the biggest problem face by the scientist working in the development of quantum computer is the issue of ‘De-coherence’.

It’s a state in which noise from surroundings are decoherence related to. Among others thermal energy is not sufficiently large enough to trigger the leakage of various susceptible quantum information such evolution of entanglement and mutual de-coherence may be analyzed and controlled in time which allows for the processing of the information in a completely new way. Additionally it is essential that the qubit remains in the state of quantum entanglement only with each other. Other solutions and phenomena may be used to create quantum computer such as Nuclear magnetic resonance, polarization of light, Bose-Einstein condensate, quantum dots, ion-trap rings. In 2012, scientists from the University of New South Wales created the first single atom transistor made of silicon. Phosphorous atom is set isolated in the Silicon. Phosphorous atom also possess spin motion [3].

D-Wave Systems is world’s first quantum computing company founded in 1999. The idea of building a quantum computer system was born out of the scientists experiment with superconducting material [4]. The basic elements of D-Wave’s computer processor are called SQID (superconducting quantum interference devices) which are some of the most sensitive devices use to measure the intensity of magnetic field (Figure 2).

In simple words SQID is a certain kind of superconducting ring divided by what is known the Josephson junction. The superconducting material that make up these devices have certain properties. Due to which at very low temperature nearest absolute zero, quantum takes precedence over the classic principle of physics that we are customed to. For example In the cold superconductor or SQID the phenomenon of electrical resistance does not occur at all and due to a phenomena known as messier effect some objects can even levitate [5].

One of the main reason behind the upcoming saturation in the growth of technology is power dissipation. As switches consumes power to work i.e., every bit of information need some little amount of power (according to Landauer) to pass on which ultimately produces heat. So considering this problem some reversible gates have been Proposed. Toffoli and Fredkin gates are universal i.e., any reversible gate can be constructed by using one of these gate completely. Since in CMOS structures the amount of power consumption is higher than kTln2^1 so this technology is not suitable in using reversible quantum logic gates [8].

Below we are discussing some reversible gates [9].

Reversible gates have wide applications in nanocomputing. New emerging technological areas such as hololens technology, in display technologies wherein large amount of heat is generating and which is a major energy problem. This will help in developing new devices which will cross the current extent of classical computing.

Quantum dot cellular automata also known as quantum cellular automata, or QCA are proposed and working models of quantum computation. It was first introduced by von Neumann. A cellular automata (CA) is a finite state machine consisting of a uniform (finite or infinite) network of cells [9]. It is finite that each cell can persist in solitary of a fixed number of states. As time moves forward, the state of each cell in the grid is determined by a transformation rule that factors in its previous state and the states of the immediately adjacent cells (Figure 7).

We have 4 possible clocking phases as, SWITCH, HOLD, RELEASE and RELAX. QCA clocking is used to control and propagate the signal along the QCA cells in the circuit.

This was clearly given out at Figures 8 and 9. 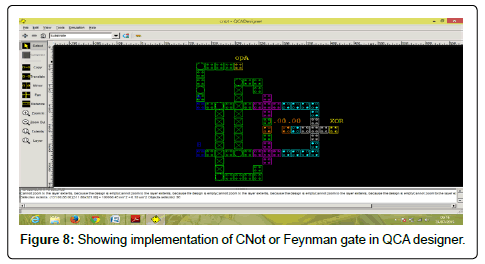 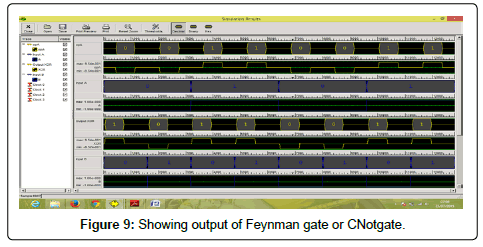 This paper describes about the quantum computing and presents the proposed design of Feynman Gate in quantum dot cellular automata. The total transmission of information requires minimum number of cells (only 96 cells) to perform operation with minimum area (0.10 μm2) required by the cells. The proposed design is energy efficient and maximizes the possibility of increasing functionality of the circuit. In future this design can be compared with the other efficient designs when developed. To check the functionality difference we can increase the number of cells and analyze the performance.