Copyright: © 2015 Yupapin PP, et al. This is an open-access article distributed under the terms of the Creative Commons Attribution License, which permits unrestricted use, distribution, and reproduction in any medium, provided the original author and source are credited.

Human brain signal processing can be interpreted and the application formed by using the tiny particle-light probe device, from which the human brain function by brain cells under subconsciousness can be monitored and investigated, which is useful for challenging investigations. By using a spintronic probe device [1-5], the particle and brain cells interaction in terms of exchanging energy can be relatively measured and observed.

Electronic device based on electron spin transport, which is known as spintronic device, has shown the promising future for new era of electronics based technologies, where the advantages of such devices are fast switching time, small size, and particle functional device. The great advantage is the particle functional aspect that can be useful for brain research, quantum measurement and information. From which the technique can be available for the applications such as particle and brain cells inter-connection, in which the tunneling particle can be trapped and used for signal processing and interpretation.

Nowadays, one of the most interesting device materials is grapheme, which has the dual properties mobility and polarisibility that can be used to form the brain researches and investigations [6,7]. It has become the excellent materials for new era of electronic materials and the interesting properties that can be used for various applications, especially for electron based device structures, for instance, electronic, optoelectronic and spintronic devices. From Figure 1a, if the material of ring resonator is grapheme, then the tunneling particle can be trapped within the micro device probe, which can penetrate into the brain cells. Moreover, the large scale device can be formed by using the device array structure, where the large area investigation can be configured. The particle spin is also interesting for brain investigation and can be increased more aspects of investigations, especially, particle aspect. 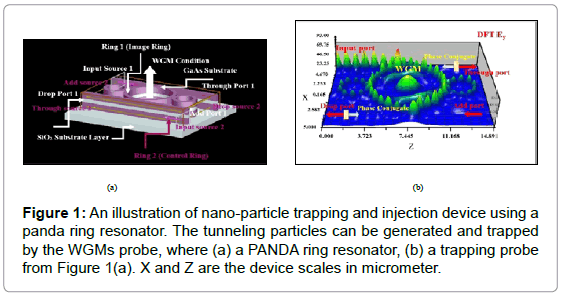 Figure 1: An illustration of nano-particle trapping and injection device using a panda ring resonator. The tunneling particles can be generated and trapped by the WGMs probe, where (a) a PANDA ring resonator, (b) a trapping probe from Figure 1(a). X and Z are the device scales in micrometer.

Up to date, the spintronic devices such as GMR valves, magnetic tunnel junctions, semiconductor spintronic devices and spin quantum bits have been the challenging devices that can be widely used in many applications. By using the spintronics concept, the speed of signal processing can be increased due to the faster switching (spin up and down) time, where the other advantages are the low energy consumption and distribution, while the short range spin transport can be formed and plausible.

In Figure 1a, the microring resonator can be fabricated by using AlGaAs/InP or grapheme materials, which can be formed by the micro-scale device (microring) in the form of thin film. In operation, after light is input into the input port, the tunneling particles within the device can be trapped and imported into the brain cells via the whispering gallery modes (WGMs), from which the trapped particles can be electron, photon or atom as shown in Figures 1b and 2a, which can penetrate into the brain tissue as shown in Figure 2b, where the interaction between atom and brain cells can be connected to the microtubules [8], in which the information can be interchanged, detected and interpreted. In operation, light from the embedded semiconductor laser with wavelength 1.55 μm is input into the device via an input port as shown in Figure 1a, where the laser power output is 1 W (approx). The microring radii are within the range of 1-5 μm. The signal modulation and detection can be operated via the add and through ports, respectively. Figure 2: The interchange between brain cell signals an sensing probe (Micro-conjugate mirror), where (a) trapped particle is formed by the WGM probe, (b) brain cells location and description.

In conclusion, we have shown that the new era of useful electronic device is the spintronic device, which can be operated similarly to the previous electronic device, but it has the better performance, especially, in which the greater switching speed than the former device. It doesn’t need the conservation of charge property, where the spin-orbit interaction and spin transport are also the very interesting aspects of investigations, especially for brain researches and investigations. From which the human brain processing investigations and applications such as consciousness, sub-consciousness and unconsciousness can be realized [8].

The authors would like to give their acknowledgments to King Mongkut’s Institute of Technology, Bangkok 10520, Thailand for research the facilities Figure 2b [7,9].