Spontaneous Corpectomy and Anterior Arthrodesis in Lumbar Spine : How Ankylosing Spondylitis Can Resolve a Vertebral Fracture

Copyright: © 2017 Vanni D. This is an open-access article distributed under the terms of the Creative Commons Attribution License, which permits unrestricted use, distribution, and reproduction in any medium, provided the original author and source are credited.

Between the 80% and 90% of vertebral fractures in over 65 years people are due to osteoporosis. Over the 30% of patients affected by vertebral osteoporosis fractures needs of surgical treatment and the 12% presents complications requiring an invasive surgical approach. We report an unusual case of spontaneous corpectomy and anterior arthrodesis occurred in a patient suffering from Ankylosing Spondylitis. This event invites us to reflect about the magnitude of the biological power of the bone healing, even in adverse conditions

Ankylosing spondylitis is a form of arthritis that primarily affects the spine. It causes inflammation of the spine joints that can lead to severe and chronic pain. In advanced cases, the inflammation process can lead to new bone formation, in order to fuse the spine in a fixed and immobile position, causing sometimes a forward-stooped posture [1]. Osteoporosis is a systemic skeletal disease marked by a low bone mass and a microarchitectural deterioration of the bone tissue, leading to an increased fragility, especially in the hip, spine and wrist [2]. Between 80% and 90% of vertebral fractures in over 65 years people are due to osteoporosis, but only the 30% are clinically manifest. Degenerative disc disease and senile neuromotor and neurosensory decay, are associated with a progression of the kyphosis of the spine, resulting in an anterior translation of the gravitational axis and a progressive posterior ligaments distraction. Over the 30% of the patients affected by vertebral osteoporosis fractures needs of surgical treatment and the 12% of them presents complications that require an invasive surgical approach. In most cases these are pathologic fractures that may occur spontaneously or after a minor trauma [3].

An-82-year Caucasian male went to the emergency department due to a low back pain and a left hip pain. The patient reported to be suffering from Ankylosing Spondylitis. The physical examination showed pain at the lumbar spine associated with contracture of the lumbar paraspinal muscles, bilaterally. The left leg appeared shortened, flexed and externally rotated. There were not significant neurological deficits. The X-ray of the spine, routinely performed, documented a deformity of L1 and L2 (Figure 1). The CT scan allowed to deeply analyse this two deformities that appeared as two old and stabilized vertebral fractures. In fact the patient reported that he fallen from a tree about 17 years earlier. Therefore, without any pharmacological, conservative or surgical treatment, the patient experienced a spontaneous vertebral fracture healing. In fact a spontaneous corpectomy of L1, whose soma was reabsorbed itself over time and an anterior arthrodesis D12-L2 occurred, although the soma of L2 had also reported a fracture (Figures 2-4). 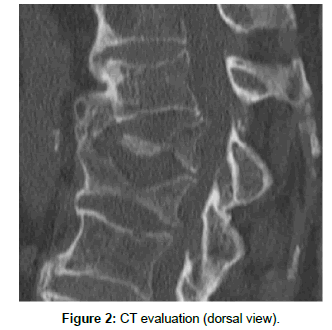 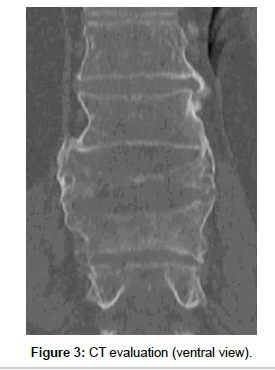 We report this unusual case that demonstrates how the biology spontaneously acts to solve alone what the man would do in an artificial way. The fracture of the body induces an height soma reduction and an increase of the kyphosis of the spine, especially at the level of the anterior spinal column. The more involved vertebrae are T7 and T8, in the middle thoracic column and T12 and L1 in the thoracolumbar transition where the great flexion occurs. The thoracolumbar hinge is most subjected to the stress, because in this zone there is the inversion of two curves with an opposite convexity. The progression of the kyphosis and anterior displacement of the gravity axes lead to an increase in the anterior flexion, producing a new fracture. In fact the risk of another vertebral fracture increases 5 fold after the first event (‘domino-effect’). These conditions must be considered in case of an open approach, especially in order to identify the correct level to treat and to select the appropriate surgery instrumentation, because in this cases there is and high risk of fixation failure [4-6]. In this case, probably, the ability of the vertebral body to fuse itself, induced by the Ankylosing Spondylitis, prevailed on the worsening of the fracture, reaching a balance and obtaining a natural resolution. Therefore, the surgical treatment of this type of fractures might result in complex and difficult, even for experienced surgeons. In some cases the progression of kyphosis and the poor bone stock require corpectomies and vertebral fixations. These approaches could be very dangerous, due to also a high risk of intra-operative blood loss. However it is the most correct treatment, especially from a biomechanical point of view.

To our knowledge, founded on a review of the literature, other cases of spontaneous corpectomy and anterior arthrodesis have never been reported until now. This event invites us to reflect about the biological capabilities of the bone healing, even in adverse conditions. In fact in this case the vertebrae were able to find a solution and to achieve the stability.

The authors declare that there is no conflict of interests regarding the publication of this paper.