Copyright: © 2016 Safaei L, et al. This is an open-access article distributed under the terms of the Creative Commons Attribution License, which permits unrestricted use, distribution, and reproduction in any medium, provided the original author and source are credited.

There has been a revolution in nonlinear physics over the past 20 years. Existence of solitons in the field of nonlinear optics was considered in 1973 [1].

Optical solitons are pulses which can be formed due to the balance between the group velocity dispersion and the self-phase modulation (SPM), traveling without distortion due to the dispersion or other effects. Solitons are classified in two forms [2,3].

Spatial Solitons is pulses which can propagate for long distances with an invariant transverse profile.

Temporal Solitons is Optical pulses that can propagate through a dispersive non-linear optical medium with an invariant shape.

These solitons, depending on the dispersion regime, can be found in two forms:

Optical dark solitons have been investigated in many theoretical and experimental papers [4]. Recently the applications of dark solitons have been interested in many achievements [5-7]. For example pulse propagation in nonlinear optical media a their applications in waveguides are some of intersting fields in new papers [8,9]. Also soliton transmission in optical fibers has been considered in nonlinear physics, electronics, photonics and communication [10].

Wave propagation modes of physical media are naturally separated into two generic classes, conservative and dissipative. Recently, it was recognized that a more particular species of PT (parity-time)- symmetric systems may be identified at the boundary between these generic types which remain invariant under the combination of parity and time-reversal symmetry operation [11-14].

The concept has its roots in quantum mechanics where a PTsymmetric non-Hermitian Hamiltonian may have an entirely real spectrum of eigenvalues [11,15-17].

The demonstrations of the PT-symmetric effects in optics in two waveguide directional linear couplers composed of waveguides with gain and loss were recently proposed in [17-19] and for bright optical solitons, which exist when the Kerr nonlinearity is obeyed by the couplers, were reported in [19-21]. Such systems are described by non Hermitian Hamiltonians. In quantum mechanics, the PT-symmetric potential satisfies the condition V (x)=V*(−x)*, denoting complex conjugation[15,20]. In nonlinear optics, the PT-symmetric potential is introduced by a complex refractive-index distribution combined with gain and loss regions, that obey the condition [17,20]. Nonlinear effects in directional couplers studied started in 1982 [22]. Theoretical analyses have suggested that such couplers operating in the nonlinear regime can be used for the all signal controls [23,24]. Arrays of the PTsymmetric couplers were proposed as a means of control of the spatial beam dynamics including the formation and switching of spatial solitons [17,25]. Investigating the properties of these solitary waves is interesting. Hatami et al. studied properties and behaviors of temporal dark solitons in different medias [26-29].

The PT-symmetric coupler with gain in one waveguide and loss in the other one has been studied theoretically and experimentally [17,19,28]. In general, the model that describes the propagation of light in an optical waveguide is based on Non-Linear Schrodinger Equation (NLS) equations coupled with the linear terms which represent the tunneling of light. To describe beams and pulses in such a system including the nonlinear PT-symmetric coupler and existence of dark solitons, we have the following dimensionless dynamical.

Here, u and v are the normalized amplitude variables at the top and bottom fiber waveguides, z and τ indicate the length of fiber and normalized time, respectively. The plus and minus signs are standing for anomalous and normal dispersion, respectively. Two kinds of solitons have been discovered depending on the dispersion sign:

Bright solitons correspond to the positive sign and in general have the solution as U (z, τ)=Asech (z, τ) exp (iA2z) in an anomalous regime.

Similar to the case of bright solitons, dark solitons corresponding to negative sign of dispersion are generally in the form of u (z, τ)=Atanh (z, τ) exp (iA2z). Figure 1: Scheme of (a) Bright soliton (b) Dark soliton in general form.

Figure 2: Scheme of nonlinear PT-symmetric coupler with gain in top waveguide and loss in bottom waveguide.

The coupler consists of four ports for input and output pulses. To satisfy the PT-symmetric condition, we assume the group velocities and the second-order dispersions in fibers are matched, and we normalize the coefficients to uττ and vττ to unity, and hence, the two waveguides have the same Kerr nonlinearity coefficients. Malomed et al. show that it is necessary for the existence of solitons [13,17].

In Eq.(1), the first term in the right hand side is related to coupling between the modes propagating in the two fiber waveguides and γ terms stand for the gain in one fiber and loss in the other. Without loss of generality, γ can be considered to be positive which means that the gain is supposed to be in the top fiber waveguide and loss in the bottom one. To confirm the PT-symmetric condition, the gain and loss coefficients must be equal [17].

The associated powers are:

In this system, neither the individual powers associated with the two modes nor their sum are conserved if γ/=0.

For the total power:

In order to analyze Eq (1), it is convenient to represent the variables in the following form:

Where θ is a constant angle satisfying:

and Ω is a real parameter.

By solving equation (7), it is obvious that we arrive at familiar dark soliton solution:

To investigate the stability of these solitons, we use the same perturbation method as used by Alexeeva et al. [17].

By using symmetric and antisymmetric combination

We linearized Eqs.(8) in δU and δV. Consider a separable solution for the linearized equation in the form of:

By introducing the operator

and the component vectors :

We arrive at two eigenvalue problems

We assume ν and ω are real, μ=ν − iω and also the skew-symmetric matrix, J is:

In the first eigenvector, both eigenvalues are zero for q. This component leads Eq.12 to be a linearized eigenvalue equation which can be integrated. Therefore, it is not a perturbed equation and it will be stable.

The second eigenvector has q/=0, and using this eigenvector for Eq (12), it becomes a non-homogeneous equation and with no nonzero eigenvalue. This vector is an eigenfunction for Eq (13) and hence, investigating the stability is reduced to solving Eq. (13). These results are the same as bright soliton solutions.

The eigenvalue problem (15) can be written as:

According to equation L0y0=λy0, the eigenvalue of L0 is λ=−1, and it’s corresponding eigenfunction is y0=tanh X.

As we can see in propagating a dark soliton in a PT-symmetric coupler, the perturbed equation has two kinds of solutions, namely the bright and dark solitary solutions.

The lowest eigenvalue of the operator L0 +η equals η. For the scalar function of q1(T), the eigenvalue problem in Eq.(16) can be written in the form of:

, the stability condition is calculated as

According to the PT-equations, for evaluating a dark soliton inside a PT-symmetric nonlinear coupler, the numerical methods might be applied to investigate the stability of these perturbed equations by means of the eigenvalues introduced in solutions of Eqs.19 and 20 in the last section.

For the numerical simulation and verification of the propagation of the solitons, we attempted to construct such solitons by adding perturbed eigenfunctions and corresponding eigenvalues where the perturbation method to the initial pulses needs to be applied. The initial condition is taken such that the dark soliton pulse is launched into the coupler as follows:

Then the perturbed eigenfunctions is added to these pulses.

As it was mentioned in solution of Eq (14) and (15), three different eigenfunctions with their real eigenvalues yield. The evolution of dark soliton inside a coupler to obtain the expected gain in top waveguide and loss in bottom by calculating the eigenfunctions and their eigenvalues with the perturbed method is presented. Figure 3a and 3b show the evolution of dark soliton with y0=tanh(T) and perturbed eigenfunction where it propagates through the PT-symmetric nonlinear coupler for |u|2 versus τ and z, and |v|2 versus τ and z. 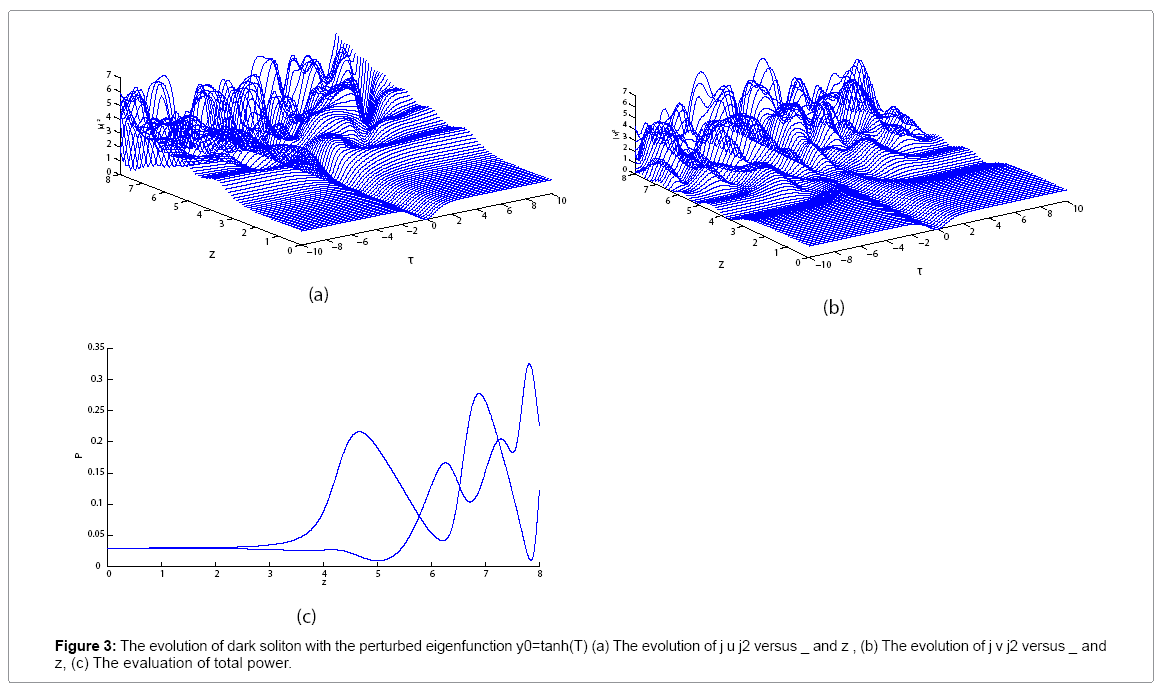 Also in Figure 3c, the evaluation of total powers, Pu + Pv, is calculated and illustrated according to Eq. (2).

The domain and phase is changed in this situation and according to Figure 3a-3c and their equations, this soliton with the added perturbed eigenvalue and corresponding eigenfunction is unstable.

In Figure 4a and 4b the numerical results are presented in terms of the analytical solution for the perturbed eigenfunction y1=sech(T) tanh(T) added to the initial pulse for |u|2 and |v|2. Moreover, according to Figure 4c, it can be concluded that although some fluctuation in this solution is observable, it is stable.

In Figure 5a and 5b the evolution of the dark soliton with the second perturbed eigenfunction, y1=(1 − tanhT 2), and corresponding eigenvalues which are calculated by perturbation method according to Eqs (13) and 16 for | u |2 and |v|2 are depicted.

Figure 5: The evaluation of perturbed eigenfuntion, “1tanh (T)” added to the initial pulse is presented for (a) j u j2 and (b)j v j2 and in (c) the corresponding total power.

The evaluation of the associated total power, Pu + Pv, of this result is also obtained and presented in Figure 5c.

Given these results, it can be safely assumed that propagating dark soliton in a PT-symmetric nonlinear coupler in this case is unstable.

In this work, we obtained the analytical and numerical solutions of propagating a pulse in a nonlinear coupler with nonlinearity in PTsymmetric potentials with gain in one fiber waveguide and loss in the other one. Analytical investigations showed that the coupled equations which propagate in the fiber waveguide had a solution in the form of temporal dark soliton. The stability of these solutions was obtained by analytical and numerical analyses via perturbation method. Evaluating perturbed analytically showed that perturbations which guaranty the stability were in two forms of bright and dark solitons. However, the usual solutions of non-coupled equations were merely dark solitons and for a bright solution propagating in the nonlinear coupled fiber, only a bright soliton perturbation satisfied the stability. According to the numerical results and total observable power perturbed in the form of bright solutions, we conclude that although this soliton has some fluctuations, it is stable. In addition, in the perturbed dark form, the temporal dark soliton is proved to be unstable.