Copyright: © 2015 Jain PS, et al. This is an open-access article distributed under the terms of the Creative Commons Attribution License, which permits unrestricted use, distribution, and reproduction in any medium, provided the original author and source are credited.

A HPTLC/ Densitometric method has been developed for the determination of Guaifenesin (GFN) in bulk and pharmaceutical formulation. The estimation of drug was performed on HPTLC aluminium plates precoated with silica gel 60 RP-18 TLC F254 S using toluene: methanol: ethyl acetate: acetic acid (7:0.8:1.2:0.5 v/v/v/v) as mobile phase. The densitometric quantification for the drug was carried out at 274 nm. GFN obeyed linearity in concentration range 800 – 2800 ng/band with coefficient of correlation 0.999. The Rf for GFN was found to be 0.6 ± 0.02. The proposed method was applied for pharmaceutical formulation and % label claim for GFN was found to be 100.34 ± 1.06. The method was validated for accuracy, precision and ruggedness. Accuracy of the method was checked by recovery studies at three different levels i.e. 80 %, 100 % and 120 %. The % recovery of GFN was found to be in the range of 99.48% - 100.68 %; the % RSD value was less than 2 indicates the accuracy of the method. The method was found to be precise as indicated by the inter-day, intra-day and repeatability analysis; showing % RSD less than 2. The results did not show any statistical difference between operators showing that developed method was rugged. GFN was subjected to acid and alkali hydrolysis, oxidation and thermal degradation. The drug undergoes degradation under acid-base conditions, hydrolysis, oxidation, photo degradation except dry heat degradation. This indicates that the drug is susceptible to acid and base. The degraded product was well resolved from the pure drug with significantly different Rf value. Statistical analysis proves that the method is repeatable, selective and accurate for the estimation of investigated drug. The proposed developed HPTLC method can be applied for the identification and quantitative determination of GFN in bulk drug and pharmaceutical formulation.

Guaifenesin, (RS)-3-(2-methoxyphenoxy)propane-1,2-diol (Figure 1), Guaifenesin may act as an irritant to gastric vagal receptors, and recruit efferent parasympathetic reflexes that cause glandular exocytosis of a less viscous mucus mixture. Cough may be provoked. This combination may flush tenacious, congealed mucopurulent material from obstructed small airways and lead to a temporary improvement in dyspnea or the work of breathing. Guaifenesin is an expectorant which increases the output of phlegm (sputum) and bronchial secretions by reducing adhesiveness and surface tension. The increased flow of less viscous secretions promotes ciliary action and changes a dry, unproductive cough to one that is more productive and less frequent. By reducing the viscosity and adhesiveness of secretions, Guaifenesin increases the efficacy of the mucociliary mechanism in removing accumulated secretions from the upper and lower airway [1,2]. 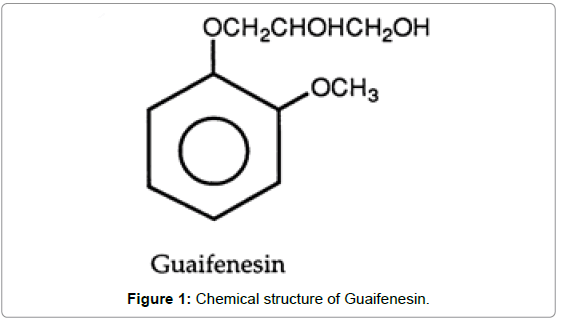 Guaifenesin was supplied as a gift sample from Macloeds Pharmaceutical, Daman, India all chemicals and reagents used were of analytical grade (MERCK Chem. Ltd., Mumbai). Methanol was selected as the solvent for sample preparation.

An accurately weighed GFN (20 mg) was transferred to 10 mL volumetric flask; dissolved in methanol and the volume was made up to mark with the same solvent to give 2000 ng/μL solution. Linearity was performed using working standard of GFN. Calibration was done by applying standard stock solution ranging from 0.4-1.4 μL on TLC Plate; which gives concentration of 800 – 2800 ng/band. The plate was developed and scanned as described under above chromatographic conditions. Calibration curve was constructed by plotting the peak area vs. corresponding drug concentration.

Intra-day and inter-day precision: Intraday precision was determined by analyzing, the three different concentrations 800 ng, 1200 ng and 1600 ng of GFN, for three times within the day. Day to day variability was assessed using above mentioned three concentrations and analyzing it for three consecutive days, which shows reproducibility of the method.

Repeatability: Repeatability of sample application was assessed by applying 0.8 μL (1600 ng) of drug solution six times on a TLC plate followed by development of plate and recording the peak height and area for 6 bands.

Limit of Detection and Limit of Quantification

Limit of Quantification (LOQ) LOD and LOQ were calculated by the method which was based on the SD of the response and the slope (S) of the calibration curve at levels approximating the LOD and LOQ, Sensitivity of the proposed method was estimated in terms of Limit of Detection (LOD) and LOD = 3.3(SD/S) and LOQ = 10(SD/S). Stock solution of GFN was prepared and different volume of stock solution in the range 700 to 1200 ng were applied in triplicate.

Ruggedness of the method was checked by analyzing 1600 ng (n = 6) of GFN, with the help of two analysts and the variations in the results were checked.

Accuracy Recovery study was carried out by over spotting at 80, 100 and 120 % level where known amount of standard GFN was added to pre analyzed sample (800 ng of GFN) and subjected them to the proposed TLC method.

Robustness was studied at the concentration level of 1600 ng/band. In this study, few parameters (mobile phase composition, development distance and duration of saturation) were studied and the effects on the results were examined.

To determine the content of GFN in tablets, twenty tablets, each containing 250 mg GFN, were accurately weighed and finely powdered. An amount equivalent to 20 mg GFN was transferred to 10 mL volumetric flask and extracted with methanol for 20 minutes by shaking mechanically. The solution was diluted to volume with the same solvent and filtered; from it, the sample solution (0.8 μL, containing 1600 ng of GFN) was applied on TLC plate, developed and scanned.

The 20 mg of GFN was separately dissolved in 10 ml of methanolic solution of 1N HCl and 1N NaOH. These solutions were kept for 8 h at room temperature. The 1ml of above solutions was taken and neutralized, then diluted up to 10 ml with methanol. The resultant solution were applied on TLC plate in triplicate (0.8 μl each, i.e. 1600 ng per spot).

The 20 mg of GFN was separately dissolved in 10 ml of methanolic solution of hydrogen peroxide (10.0%, v/v). The solution was kept for 8 h at room temperature in the dark in order to exclude the possible degradative effect of light. The resultant solution was applied on TLC plate in triplicate (0.8 μl each, i.e. 1600 ng per spot).

The powdered drug was kept at 60°C for 8 h under dry heat condition and then 20 mg sample was taken and dissolved in 10ml methanol. Spot were applied and chromatograms were run.

The photochemical stability of the drug was also studied by exposing the stock solution to direct sunlight for 24 h. The resultant solution (0.8 μL, i.e. 1600 ng per spot) was applied on a TLC plate and chromatograms were run.

Different ratios of toluene, methanol and ethyl acetate were tried as mobile phase was tried but, tailing of spot, less persistent spots were observed in most of the attempts. In order to overcome the problems, toluene: methanol: ethyl acetate: acetic acid (7:0.8:1.2:0.5 v/v/v/v) was tried and results is good resolution, sharp and symmetrical peak with Rf value of 0.6 for GFN (Figure 2). 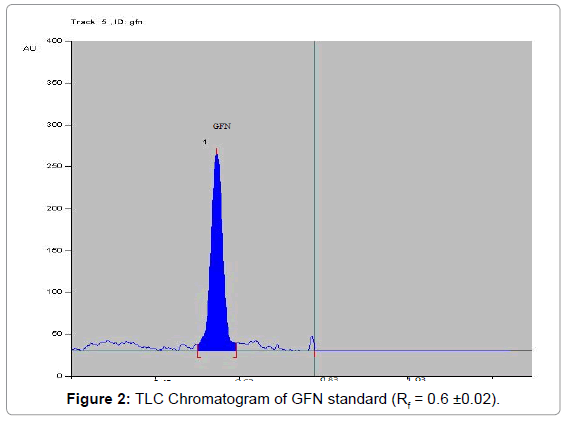 Detection limit and quantification limit were calculated by the method described in the section “Limit of detection and limit of quantification”. The LOQ and LOD were found to be 2.24 and 6.79 ng, respectively. This indicates the adequate sensitivity of the method.

The proposed method when used for extraction and subsequent estimation of ciprofibrate from the pharmaceutical dosage formed after over spotting with 80%, 100% and 120% of additional drug afforded good recovery of ciprofibrate. The amounts of drug added and determined and the percentage recovery are listed in Table 2.

Robustness of the Method

The standard deviation of peak areas was calculated for each parameter, and % RSD was found to be <2%. The low values of % RSD values, shown in Table 3, indicated the robustness of the method.

A single spot at Rf 0.6 was observed in the chromatogram of the drug samples extracted from tablets. There was no interference from the excipients commonly present in the tablet. The % drug content and % RSD were calculated. The low % RSD value indicated the suitability of this method for the routine analysis of ciprofibrate in pharmaceutical dosage forms (Table 4 and 5).

GFN was subjected to acid and alkali hydrolysis, oxidation and thermal degradation. The drug undergoes degradation under acidbase conditions, hydrolysis, oxidation, photo degradation except dry heat degradation. This indicates that the drug is susceptible to acid and base. The degraded product was well resolved from the pure drug with significantly different Rf value. Statistical analysis proves that the method is repeatable, selective and accurate for the estimation of investigated drug. The proposed developed HPTLC method can be applied for the identification and quantitative determination of GFN in bulk drug and pharmaceutical formulation (Figure 3-5). 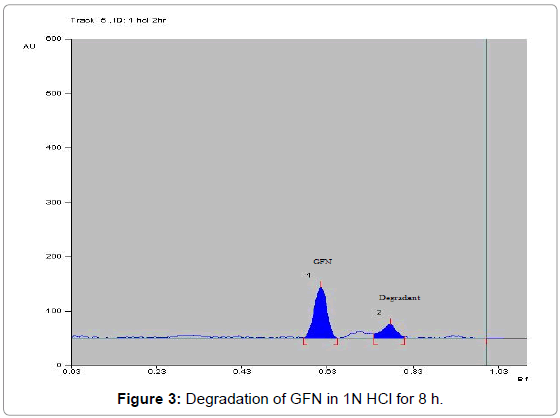 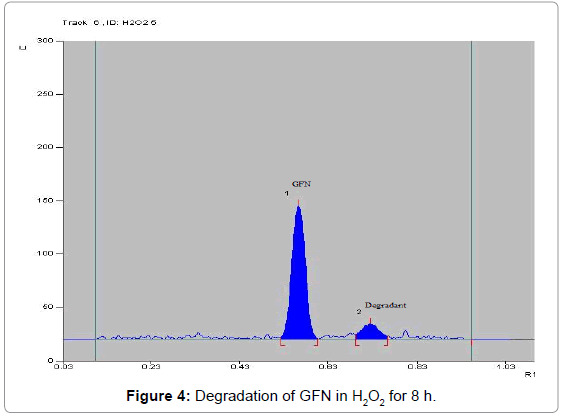 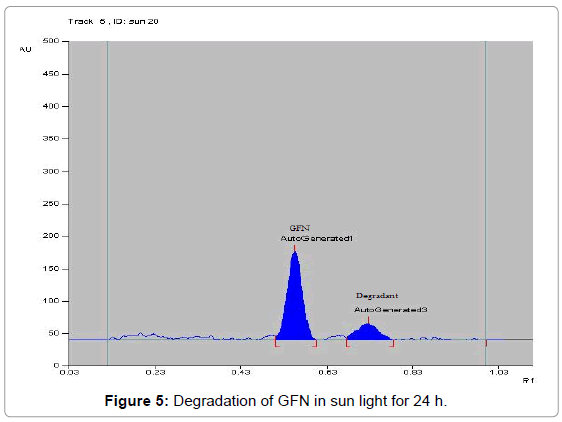 Figure 5: Degradation of GFN in sun light for 24 h.

The developed HPTLC method was precise, specific, and accurate and stability indicating and validated based on ICH guidelines. Statistical analysis proves that the method is repeatable and selective for the analysis of GFN as bulk drug and in pharmaceutical formulations.

The method can be used to determine the purity of the drug available from the various sources by detecting the related impurities. As the method separates the drug from its degradation products, it can be employed as a stability indicating one.