Copyright: © 2016 Reena G, et al. This is an open-access article distributed under the terms of the Creative Commons Attribution License, which permits unrestricted use, distribution, and reproduction in any medium, provided the original author and source are credited.

Pectin lyase finds applications in the degumming and retting of plant fibers where it degrades highly methylesterified pectin without prior action of any other pectinase. Response surface methodology (RSM) has been frequently utilized for the optimization of production process of industrially important enzymes from microbes. In the present work, fermentation conditions for the production of pectin lyase from Bacillus cereus were optimized using the factorial and central composite design of RSM. The cubic order polynomial regression model was found to be adequate and significant with a determination coefficient R2 of 0.9505 (p<0.0001). The ANOVA analysis and three dimensional surface plots confirmed interaction among variables. The optimum values of variables were found to be pectin 4% (w/v), sodium carbonate 1% (w/v), manganese sulfate 0.055% (w/v) and magnesium sulfate 0.018% (w/v) at 150 rpm under response surface curves. After optimization, the experimental value of maximum activity of enzyme (3.37 U/ml) was found higher but close to the predicted value (2.68 U/ml) and the enzyme activity increased by 1.32 fold (32.16%).

Pectin is a hetero-polysaccharide which is made up of D-galacturonic acid residues linked through α-(1-4) linkage and esterified with methanol at the carboxylic groups based on their degree of esterification [1]. A major fraction of the primary wall of dicots and non-graminaceous monocots is pectin that accounts for as much as 30% of the total polysaccharides [2]. Pectinases degrade pectin, a high molecular weight acid polysaccharide consisting of α-(1-4) linked D-galacturonic acid residues [3], present in the middle lamella of plant cell wall. Pectinolytic enzymes have various classes and sub-classes depending upon their substrate specificity and mode of action for example methyl de-esterases, hydrolases and lyases. Among all pectinases, pectin lyases (E.C.4.2.2.10) are of great importance, because they degrade pectin polymers by β-elimination mechanism that results in the formation of 4,5-unsaturated oligogalacturonides while other pectinases degrade pectin molecule completely by acting sequentially [1]. Pectinases are used in processes such as degumming of plant fibers, scouring of cotton fibers, retting of flex, where removal of pectic substances is necessary such as to avoid imperfections in dyeing, water absorbency and whiteness of cotton due to criss-crossed structure of pectin and also to study the structure of pectin [4]. Pectin lyase produced by Aspergillus flavus MTCC 7589 was for the first time used in retting of sunn hemp (Crotolaria juncea) [5]. In a recent study, it has been found that extracted pectin could be used as a medium for encapsulation of some bioactive compound viz., crocin, picrocrocin, and saffrana [6]. In view of this, the present investigation was carried out to optimise conditions for maximum production and activity of alkaline pectin lyase from Bacillus cereus in a cost effective manner. In a recent research work, different substrates were evaluated for optimum and cheap production of pectate lyase from Erwinia chrysanthemi Ec9 and highest yield of pectate lyase was obtained using basal medium containing lemon peel extract and yeast extract [7]. Any enzymatic process runs under multiple variables and changes in these variables decide the yield of process. Each process variable can be optimized and studied manually but study of cumulative impact of all the variables is tedious and laborious work. Moreover, the inability of conventional methods to explain the extent of effect of process parameters in biotechnology has led to the use of statistical methods [8]. Response surface methodology (RSM) is a statistical analysis of the impact of different process variables on production process and also displays the interaction of different variables with each other at a time [9]. Several statistical models are used in RSM to evaluate the effect of independent variables on the desired variable response [10]. The RSM has been applied as an experimental strategy for seeking the optimum conditions in a multivariable system [11]. The randomized experiments have to be performed in order to minimize the effects of unexplained variability in the actual responses due to extraneous factors [12]. Lately, many studies have applied this technique for the production of industrially important enzymes such as cyanide degradation ability of bacterial consortium was enhanced by the statistical methods of optimization [13]. Similarly, culture conditions have been optimized for enhanced production of protease from Bacillus subtilis [14]. RSM being less laborious and timeconsuming has been applied successfully in biotechnological processes to decreases the number of experimental trials [15]. Keeping in view this, the present investigation was carried out with the aim to reveal interactions among different production parameters and to optimize them for pectin lyase production from Bacillus cereus using RSM. The optimum conditions during the pectinase extraction procedure could improve the enzymatic characteristics of the enzyme and protect its activity and stability [16].

Pectin and all other chemicals used in the study were of analytical grade and procured from Sigma Aldrich (U.S.A) and Himedia, Mumbai, India.

Pectin lyase assay was performed by spectrophotometric method [17], using pectin as substrate and TBA (thiobarbituric acid) as coloring agent at 550nm. One unit of enzyme activity was defined as the amount of enzyme which formed l μmol/ml of unsaturated galacturonic acid per min with a molar extinction coefficient of 5500 M-1CM-1.

Plackett-Burman analysis: In Plackett-Burman analysis, twelve different production variables were screened for responses (enzyme activity) at two levels i.e. minimum and maximum. The upper and lower limits of each variable were chosen by enzyme characteristics and the preliminary investigations. The effect of each variable was calculated using the following equation:

Where, E is the effect of the tested variable and M+ and M- are responses (enzyme activity) of trials at which the parameter was at its higher and lower levels respectively and N is the number of experiments carried out [18].

The statistical model was validated for the production of pectin lyase by performing at shake flask under predicted set of conditions. The lack of fit statistics was used to test the adequacy and efficiency of the model.

The different experimental combinations of variables were obtained using the Plackett-Burman design and the study was carried out in 20 runs Table 1. A set of 20 combinations exhibited variation in activity ranging from 0.06 to 1.47 U/ml and run 13 was found to be the most appropriate combination and gave maximum activity of 1.47 U/ ml. Results obtained from Plackett-Burman analysis were further used to construct a Pareto chart Figure 1 to find out the order of significance of variables on pectin lyase production. It was evident from the Pareto chart that the concentration of pectin, sodium carbonate, manganese sulfate, magnesium sulfate and agitation rate showed positive effect and thus had significant effect on pectin lyase production from Bacillus cereus. Similarly, in a previous study pectinase production from Bacillus subtilis WSHB04-02 was optimized using RSM and results showed that only pH had significant impact on pectinases production [20]. In an another study, it had also been shown that temperature and pH were significant factors influencing pectate lyase production from Paenibacillus polymyxa N10 [21].

Table 1: Plackett-Burman experimental design for evaluating the influence of various independent variables on the production of pectin lyase from Bacillus cereus. 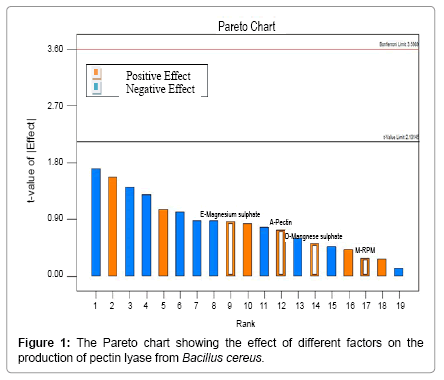 Figure 1: The Pareto chart showing the effect of different factors on the production of pectin lyase from Bacillus cereus.

A total of 50 experimental combinations Table 2 were obtained using CCD for five positive variables (concentration of pectin, sodium carbonate, manganese sulfate, magnesium sulfate and agitation rate). In other study, effects of three main variables pH, temperature and inoculum size were evaluated on amylase production using full factorial CCD [22]. The data obtained from CCD was used to generate the ANOVA Table 3 which showed that the lack of fit was non-significant and experimental data was highly reliable. The cubic process order proved best and ANOVA demonstrated that the model was highly significant (p<0.0001) Table 4. The 3D response graphs were generated for regression analysis of CCD design data using pair wise combination of five positive factors for pectin lyase production Figures 2-5.The response surface plots were more or less hill shaped and showed interactions among variables with an optimum activity around concentration of pectin 4% (w/v), sodium carbonate 1% (w/v), manganese sulfate 0.055% (w/v) and 150 rpm. The predicted optimal value can be found from the estimated surface if the surface is shaped like a hill, if the estimated surface is more complicated then shape of the surface can be analyzed to indicate the directions in which new experiments should be performed [23]. In contrast, another study carried out to optimize the bioscouring conditions of alkaline pectinase from Bacillus WSHB04-02 showed no significant interactions between variables [20]. Pectin had the most distinct impact on enzyme production in comparison to other variables as the pectin is inducer for the production of pectin lyase. This finding is in consensus with the results of other studies for increasing enzyme production using RSM [24]. The agitation rate must be in optimal range because higher agitation rate could result in enzyme inactivation due to shearing effect [25]. Figure 5: It represents that the interaction between rpm and pectin has cumulative impact on enzyme production. Neither high nor low concentration of pectin gave higher enzyme yield. 197 rpm and 4% pectin gave optimum yield of enzyme. Yield increased with increase in rpm.

ANOVA of the cubic regression model suggested that the model was very significant as was evident from coefficient of variation (CV%=65.19), low Standard deviation (0.37), high determination coefficient R2 of 0.9505 (p<0.0001), high adj. R-squared value (0.67) and low pressure value (26.75) Table 5. The R2 value indicated goodness of fit of model, but high R2 may be due to other non-significant variables and adj. R-squared value must be considered to manage the R2[26]. Similarly, in other studies RSM was carried out for optimization and the adj. R2 (adjusted coefficient of determination) obtained was 0.37, which was also high and indicated a significance of the model with p value <0.05 [27,28].

The RSM adequacy was shown by comparing the experimental data and the predicted values, which is performed by generating a fitted line plot (with experimental values on X-axis and predicted values on Y-axis) for the obtained results, showing its closeness or deviation from the fitted line Figure 6. There was a good agreement between the experimental and predicted values. The maximum activity obtained by performing RSM was 3.37 U/ml which is close to the predicted value 2.69 U/ml as calculated by ANOVA test. The figure showed the overall closeness of selected variables, thus indicating that the response surface model is adequate for predicting the pectin lyase characteristics. A perturbation plot was also obtained Figure 7 that showed optimum values of variables for pectin lyase production from Bacillus cereus. 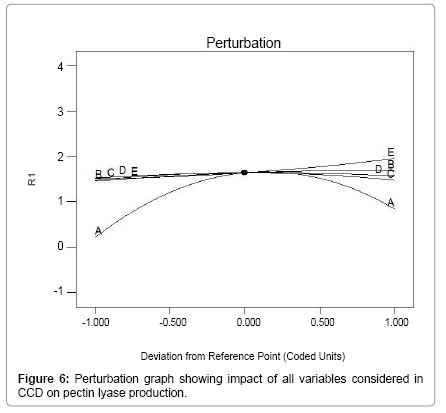 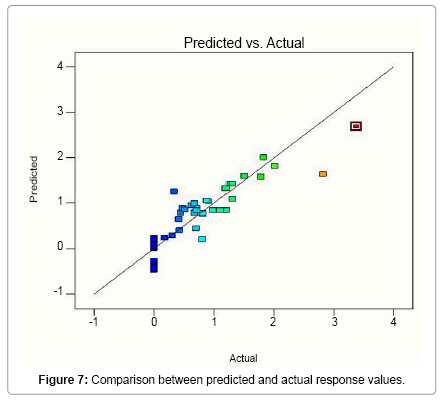 The financial support to authors from Ministry of Science and Technology, Government of India, to the Department of Biotechnology, Himachal Pradesh University, Shimla (India), is thankfully acknowledged.