Copyright: 2014 Yetunde AO, et al. This is an open-access article distributed under the terms of the Creative Commons Attribution License, which permits unrestricted use, distribution, and reproduction in any medium, provided the original author and source are credited.

Abstract
Thyroid carcinoma is the commonest endocrine malignancy, although less than 1% of all cancers. Osseous metastases are more often associated with the follicular type of thyroid carcinoma. Fewer than 5% of patients present with distant metastases. We present a case of sternal metastasis being the first observed feature of follicular thyroid carcinoma. A 62-year old female developed a painless nodule over her sternum, which progressively enlarged over approximately two years. Patient was seen at another medical facility, where histology of the mass revealed metastatic follicular thyroid carcinoma. Subsequent left thyroid lobectomy confirmed follicular thyroid cancer on histology. She was treated with 100 mCi of radioiodine I-131 (RAI), and suppressive L-thyroxine therapy implemented thereafter. However, the sternal mass recurred seven months post-sternectomy. She patient was then referred to our facility. The mass was deemed inoperable. Thus, she was treated with 200 mCi of RAI under steroid cover. The RAI therapy scan showed intense uptake in the sternal mass as well as less prominent thyroid bed uptake. The patient has since been referred for external beam radiation therapy. The clinician is reminded of one of the modes of presentation of thyroid cancer. Thyroid cancer has been deemed an indolent tumour but may also exhibit aggressive behaviour as occurred in this patient. This case also buttresses the importance of early biopsy and diagnosis in the investigation of tumours.

A 62-year old female initially developed a painless nodule over her sternum, which progressively evolved to become a large mass “the size of an orange” over approximately two years. The mass measured 10.5 x 6.5 x 6.3 cm on CT scan and was described as a heterogeneously enhancing lesion eroding the sternum. A hypodense nodule was also observed in the left thyroid lobe, and tracheal displacement to the right.

She eventually had a sternectomy two years after mass was first observed, with histology revealing metastatic follicular thyroid carcinoma. She subsequently had a left lobectomy of the thyroid, following diagnostic work-up. Histology of the surgical specimen also confirmed follicular thyroid cancer. At a private facility, 100 mCi of radioiodine (RAI) I-131 was administered to the patient. Suppressive therapy with daily dose of 100 micrograms of L-thyroxine was also implemented post-RAI.

Seven months post-sternectomy, the anterior chest mass recurred as a larger lesion. The patient presented to our facility where a large ovoid sternal mass measuring 21.5 cm x 22 cm was observed (Figure 1). She had a diagnostic scan (Figure 2), which depicted residual thyroid uptake as well as intense uptake in the sternal mass. A repeat diagnostic CT scan described significant left cervical, prevascular and right hilar lymphadenopathy. A sub-centimetre pulmonary nodule was also visualized in the anterior segment of the left lung. The recurrent sternal mass was deemed inoperable by the Endocrine surgical team. Thus, the management plan was to proceed with radioiodine-131 therapy (RAI) followed by external beam radiotherapy (EBRT). 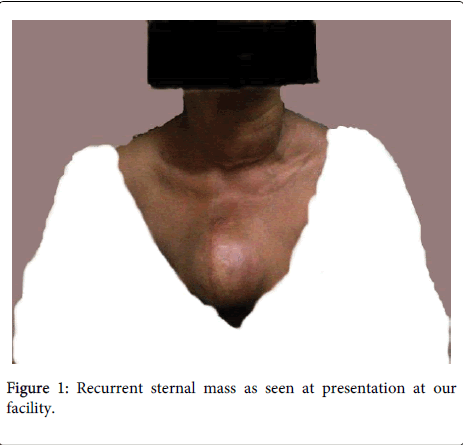 Figure 1: Recurrent sternal mass as seen at presentation at our facility. Following adequate preparation, the patient received 200 mCi of I-131 under steroid cover. By this time, the mass had increased in size to 23 cm x 26 cm. It is of interest to note that following RAI ablation, her radiation levels did not diminish as rapidly as expected despite liberal fluid intake as tolerated. She was eventually deemed fit for public interaction twelve days post-RAI instead of the usual three to four days. The therapy scan (Figure 3) showed intense uptake in the sternal mass as well as less prominent thyroid bed uptake. Post-RAI therapy haematology profile was satisfactory. The patient has since been referred for EBRT. 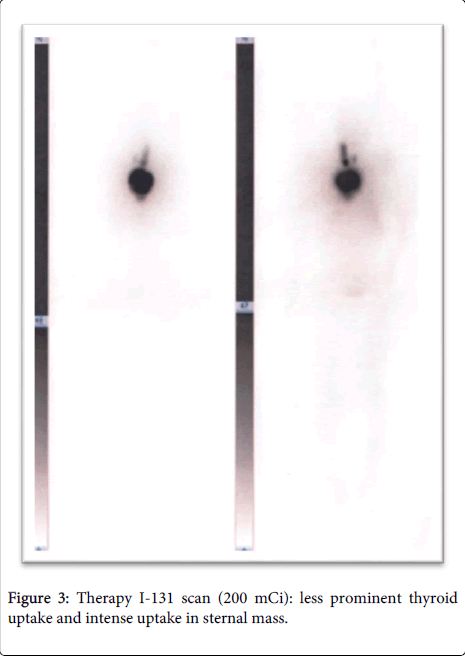 Follicular thyroid carcinoma is known to cause distant metastases most commonly to the lungs and skeleton, less commonly to the brain and the liver [8]. The frequency of skeletal metastases has been quoted as being as high as 23% in other reports [9,10]. At first presentation, fewer than 5% of patients have distant metastases [6]. Goffredo et al [11] also described the frequency of osseous metastases at presentation in 59,809 thyroid cancer patients as 2.2%. They are commoner in male than in female patients, and in older patients. Bone metastases confer poorer prognosis on affected patients as they are usually not cured with RAI therapy [12,13]. Durante et al. [14] described metastases as being commoner in follicular than in papillary thyroid cancer; 7-28% vs. 1.4-7%, respectively.

Compared to radioiodine or FDG PET/CT imaging, planar bone scintigraphy (BS) has been described as being less sensitive in detecting skeletal metastases [15]. However, both osteoblastic and osteolytic metastases may develop from thyroid cancer, and the bone scan is notorious as being less sensitive for lytic bone lesions unless they are large enough or aggressive. Positron-emission tomography (PET) imaging with F-18 fluoride or F-18 fluorodeoxyglucose (FDG) [16] is another Nuclear Medicine option, with its improved spatial resolution and sensitivity [17]. The latter may also display soft tissue metastases. In such instances, anatomical radiological imaging is complementary. This patient had radioiodine imaging which showed primary lesion and metastases. Complementary BS was not performed prior to RAI therapy as it was perceived that the I-131 scan would suffice, but BS will be also be implemented in patient’s follow-up plan.

Treatment options for skeletal metastases are surgical resection, external beam radiotherapy, bisphosphonate therapy, tumour embolization, palliation with analgesia and radiotracers for those lesions recalcitrant to analgesia. Bone metastases are quite difficult to cure, as bone tissue itself is radio-resistant. Thus, these measures are palliative. The aggressive nature of the lesion has also raised the possibility of chemotherapy as an option for therapy.

The delay in return of radiation levels to normal in the patient is probably due to retention of radiotracer in the large mass. Her renal function had been confirmed as normal prior to therapy.

The patient was treated with a second dose of 200 mCi and later referred for EBRT.

The clinician is reminded of one of the modes of presentation of thyroid cancer. Thyroid cancer has been deemed an indolent tumour but may also exhibit aggressive behaviour as occurred in this patient. The importance of early biopsy and diagnosis in tumour investigation is once again buttressed. As well, this case illustrates the advantage that SPECT/CT would have contributed to patient’s imaging.