Copyright: © 2016 Xu Y, et al. This is an open-access article distributed under the terms of the Creative Commons Attribution License, which permits unrestricted use, distribution, and reproduction in any medium, provided the original author and source are credited.

Introduction: Angle kappa is important in our clinical practice as it can give the appearance of strabismus. A vertical angle kappa is secondary to macula heterotropia as a result of retinal traction from scar tissue in the posterior pole. Case report: We present an interesting case of a 25 year-old Chinese female who presented with an abnormal vertical angle kappa due to macula ectopia from a toxocara retinochoroidal granuloma. She had an apparent right exotropia and hypotropia on Hirschberg and Krimsky but a hypertropia on alternate prism cover test. Our patient was keen for surgical correction as she was bothered by the appearance of her large angle squint. The main concern about strabismus surgery in patients with angle kappa was that it could break down the patient’s fusion and cause diplopia. Conclusion: The management of vertical angle kappa is difficult and odifficult to treat surgically. We describe this rare case of a patient who underwent surgical correction of only the horizontal recti and she achieved apparent orthophoria with a good cosmetic outcome. Patient also had no diplopia post-operatively.

Angle kappa is defined as the angle between the line of sight and the pupillary axis. The line of sight, or visual axis, corresponds to the line connecting the object of fixation to the fovea. A line that passes perpendicular to the centre of the cornea forms the pupillary axis. It is considered positive (apparent exotropia) or negative (apparent esotropia) if the light reflex is displaced nasally or temporally respectively relative to its normal position. As the fovea is usually located within 5° temporal to the centre of the posterior pole, the normal physiologic angle kappa is slightly positive, with the light reflex displaced a little nasally in orthotropic patients. Studies have shown that individuals with emmetropia have the largest angle kappa. Hyperopes tend to have slightly larger angle kappas than miopes [1,2]. Most angle kappas are physiologic; but larger angle kappa can be caused by retinal traction such as retinopathy of prematurity, familial exudative vitreoretinopathy, retinochoroidal scars and albinism [3]. We present an interesting patient with an abnormal vertical angle kappa caused by Toxocara retinogranuloma causing macula heterotropia that was treated successfully with strabismus surgery.

A 25-year-old Chinese female presented to the strabismus clinic requesting assessment for surgical correction of a long-standing largeangle exotropia of her right eye. She had no significant birth history and reported that her right eye had been deviated outwards since young. She had not sustained any ocular or head trauma and had no significant past medical history or family history of strabismus.

On ophthalmic examination, best-corrected visual acuity was 20/40 and 20/20 for the right and left eyes respectively. Manifest refraction of the right eye was -2.75/ + 2.75 × 90° and that of the left eye was -7.00/ + 2.00 × 85°. Stereopsis was absent. Hirschberg and Krimsky examination of her alignment showed a right exotropia of 60 PD (prism dioptre) and a hypotropia of 15 PD (Figure 1A). Alternate prism cover test confirmed the 60 PD of exotropia, but revealed 15 PD of hypertropia instead (Figure 1B and 1C). The right hypertropia increased on right gaze and right tilt, but measured the same in up- and down-gaze (Figure 2). There was no near-distance disparity. In spite of the good vision in both eyes, double Maddox rod and Lancaster red-green testing could not be performed due to suppression of the right eye. 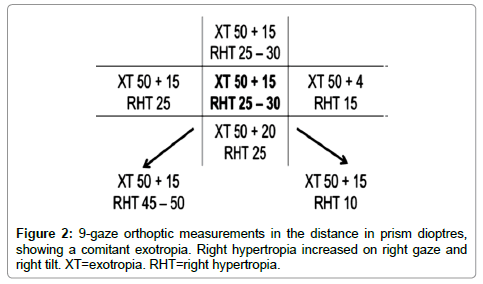 Examination of the orbital adnexae and anterior segment was unremarkable. A right relative afferent pupillary defect was absent. Posterior segment examination showed a right quiescent retinochoroidal granuloma in the inferior fundus with fibrotic bands extending to the disc. The fovea was displaced inferiorly relative to the disc (Figures 3a-3c). Right fundus excyclotorsion was observed. Even after fundus excyclotorsion has been accounted for, the fovea was still considerably displaced inferiorly. The left eye examination was unremarkable. The resultant abnormal vertical angle kappa of the right eye explains the apparent right hypotropia on Hirschberg and Krimsky examination although a right hypertropia was actually elicited on alternate prism cover testing. 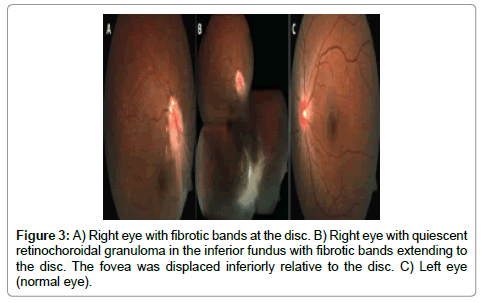 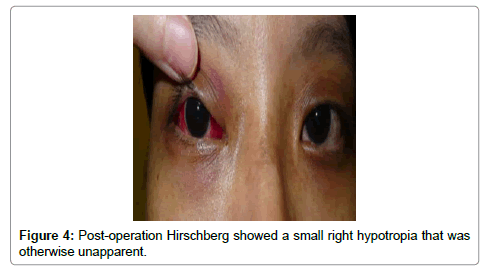 The principles of strabismus surgery for horizontal and vertical angle kappas are the same, and depend on the severity of the apparent misalignment and the presence of binocular vision. Strabismus surgery to correct a significant angle kappa is generally contra-indicated in a patient who has fusion and binocular vision, as this can result in diplopia. The risk of inducing diplopia can be assessed by simulation of correction with prisms in real space, or with a synoptophore preoperatively. Most ophthalmologists will not recommend strabismus surgery in patients with angle kappa. There are also limited literature available which about the surgical management of vertical angle kappa.

Strabismus surgery to correct her true hypertropia will significantly worsen the appearance of her hypotropia. A reasonable surgical approach would be just to correct the horizontal deviation alone, given the suppression of her right eye and low fusion potential. This can be achieved with a monocular horizontal recess-resect procedure or bilateral lateral rectus recessions, with or without adjustable sutures. Another surgical option to achieve an aesthetically acceptable result would be a monocular horizontal recess-resect procedure on the right eye with an upward transposition to correct the apparent right hypotropia. This could potentially worsen her true hypertropia, but the patient experienced no diplopia when prism correction was simulated.

We performed a horizontal monocular recess-resect procedure for our patient and resulted in good correction of both her horizontal and vertical misalignment.

We describe an interesting case of an abnormal vertical angle kappa from a Toxocara retinochoroidal granuloma that achieved good apparent alignment from surgical correction of only her horizontal recti. There are very few reports of the successful surgical management of patients with vertical angle kappa as management has always been difficult. Orthoptic examinations with Hirschberg, Krimsky and prism cover tests are essential and surgical options should be carefully considered.