+441467840001
Strategies for the Synthesis of Thiazolidinone Heterocycles | OMICS International

Strategies for the Synthesis of Thiazolidinone Heterocycles

2Department of Pharmacy, University of Science and Technology, Sana'a, Yemen

Copyright: © 2016 Mashrai A, et al. This is an open-access article distributed under the terms of the Creative Commons Attribution License, which permits unrestricted use, distribution, and reproduction in any medium, provided the original author and source are credited.

Thiazolidinones is the special class of heterocyclic compounds with a broad spectrum of biological activities such as anti-inflammatory, antiproliferative, antihistaminic, anti-HIV, hypnotic, anaesthetic, antifungal, anthelmintic and antiviral agents as well as CNS stimulants. Therefore researchers have synthesized these condensed heterocycles through different complex pathways as target structures for biological studies. This review focuses on the various strategies followed for the convenient synthesis of thiazolidinone based heterocyclic derivatives. The steps included condensation followed by cyclization of Schiff’s bases, either in a step-wise manner or in one pot under different conditions. Mercaptoacetic acid, thiolactic acid, chloroacetyl chloride, potassium thiocyanate, ethylchloro acetate and ammonium thiocyanate are the most common reagents used for the synthesis thiazolidinone appended on different heterocyclic skeletons.

Thiazolidinones and their derivatives display a large variety of activities such as antibiotic, diuretic, organoleptic, tuberculostatic, antileukaemic and antiparasitical [1,2]. As far as literature is concerned, little is known about thiazolidinones and their bioactivities. Thiazolidinones (1) are classified as doubly unsaturated five membered heterocyclic compounds contain one nitrogen, one sulphur and three carbon atoms including a carbonyl group.

Moawad et al. reported that reaction of Schiff base (3) with mercaptoacetic acid in dry benzene afforded thiazolidinone (4). Schiff base (3) was obtained by the condensation of, 3,4-xylene sulphonate ester of p-hydroxy benzaldehyde (2) with p-aminobenzoic acid [3]. 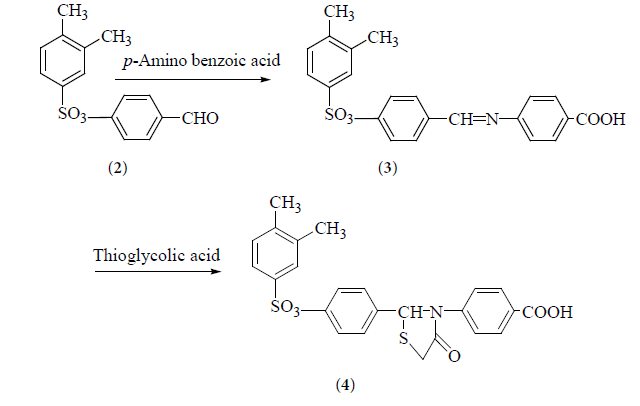 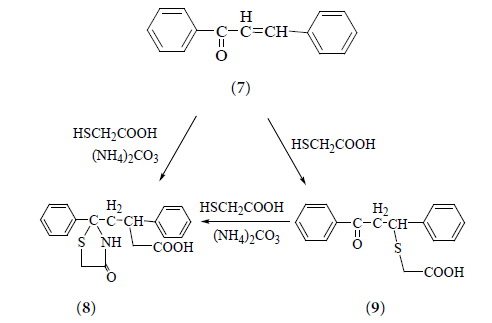 El-masry et al. reported that condensation of compound (10) with aromatic and heterocyclic aldehydes in absolute ethanol afforded the corresponding Schiff ’s bases (11). The cyclocondensation of some substituted Schiff ’s bases with thioglycolic acid and thiolactic acid afforded the corresponding thiazolidinone (12) and (13) [6]. 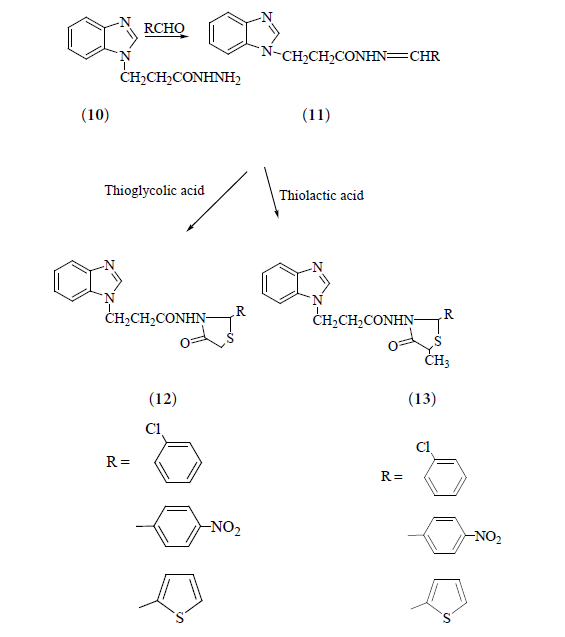 Anthonsen et al. synthesized 2-imino-3-(4-arylthizol-2-yl)-thiazolidin-4-ones (16) via the key intermediates, 2-amino-4-arylthiazoles (14) which were reacted with chloroacetyl chloride to produce the corresponding 2-chloro-acetamido-4-arylthiazoles (15). The latter was treated with potassium thiocyanate in refluxing acetone to afford the product (16) [7].

Ocal et al. synthesized substituted 4-thiazolidinones (18) by the reaction of mercaptoacids aldimines (19) which were obtained by the condensation of pyrrole-2-carbaldehyde with different aromatic amines [8]. 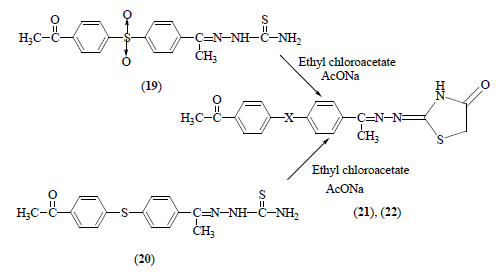 Parekh et al. prepared that substituted Schiff ’s bases (24) by the treatment of 2-amino-4-(α-methoxyiminocarbomethoxymethyl)-thiazole (23) with different aromatic mercaptopropionic acid in dry benzene furnished desired thiazolidinones of type (25) and (26) respectively. The products were evaluated for their in vitro growth inhibiting activity against several microbes. Some of them showed significant anti-tubercular and antifungalactivity [10]. 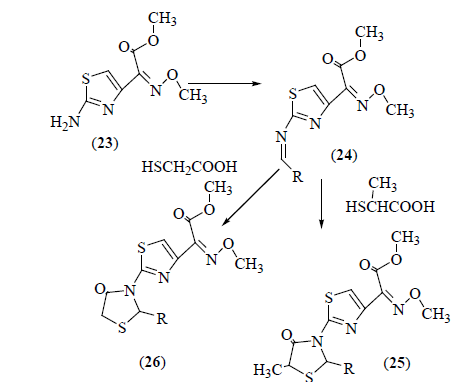 Monforte et al. reported the synthesis of 2,3-diaryl-1,3-thiazoldin-4-ones (29) by reacting an aromatic aldehyde (28) with an equimolar amount of (hetero) aromatic amine (27) in the presence of an excess of mercaptoacetic acid. The microwave-irradiation dramatically shortened the reaction times, affording the desired products in high yields [11]. 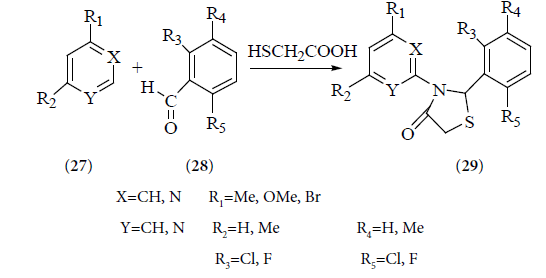 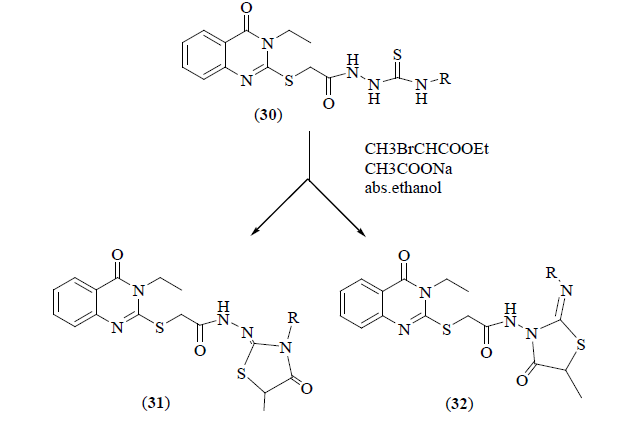 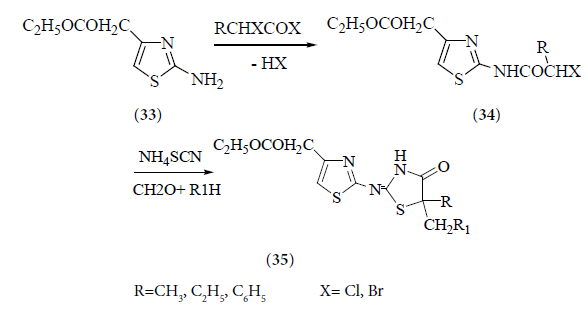 Sriram et al. reproted that the synthesis of the 2,3-diaryl-1, 3-thiazolidin-4-ones (38) was acomplished by reacting substituted benzaldehyde (37) with equimolar amount of an appropriate substituted aromatic amine (36) in the presence of an excess of mercaptoacetic acid in toluene under microwave irradiation. Unlike the conventional methods (reaction time 48 h and yeilds of 30-70%), microwave-assisted reactions were very facile (6-8 min.) and provided very good yields (64-82%) [14].

Desai et al. synthesized 4-thiazolidinones (43) in a good yields from the heterocyclization reaction of 2-(benzothiazol-2-ylthio)-N'- benzylideneacetohydrazide (42) with mercaptoacetic acid in DMF in the presence of catalytic amount of anhydrous ZnCl2 under microwave irradiation and compared with conventional methods [16]. 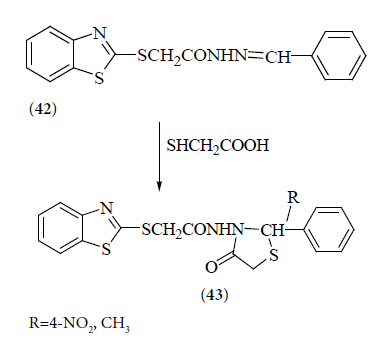 Sahu et al. reported that condensation of substituted benzaldehydes (47) with primary aryl amines (48) gave a series of Schiff bases (49) which, on reaction with mercaptoacetic acid, resulted in the formation of the corresponding 4-thiazoldinones (50) [18]. 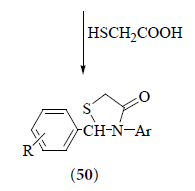 Desai and Shah synthesized of 2-(substituted phenyl)-3-[4-(2,4-dichloro-5-fluorophenyl)-6-(2-thienyl)pyrimidine-2-yl-ureido] 5H/ methyl/ carboxymethyl-4-thiazolidinones (54). It starts with compound (51) and employing the following reaction scheme [19]. 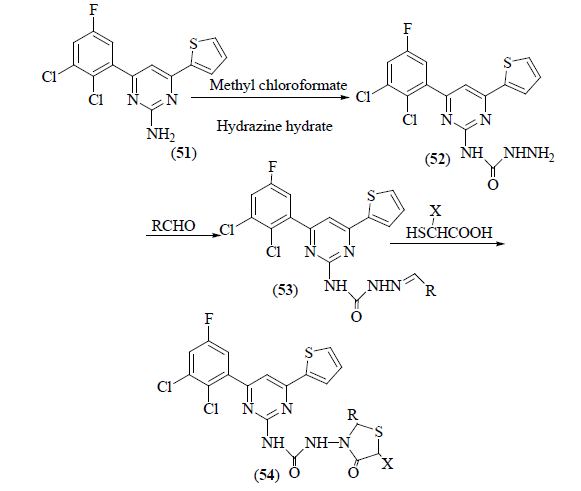 Mir et al. reported a rapid and easy solvent free one-pot synthesis of 5-arylidne-2-imino-4-thiazolidinones (61) by condensation of the thioureas (59) with chloroacetic acid and an aldehyde (60) under microwave-irradiation [22]. 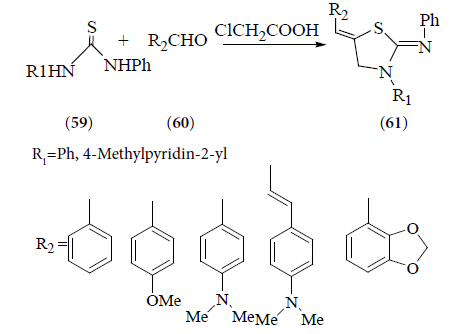 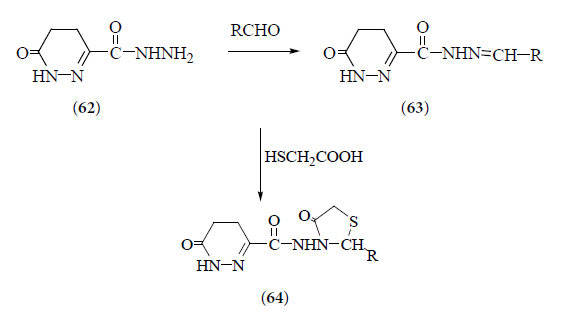 Ameta et al. reported a fast and facile procedure for the synthesis of pyridothiazolidinone (76) starting from dihydropyridine (73). Oxidation of (73) with nitrating mixture (HNO3/H2SO4) produced the anticipated 2,6-dimethylpyridine derivatives (74), which were subsequently condensed thiosemicarbazide in ethanol to produce the key intermediate 2,2-[4-(4-substitutedphynely)-2,6dimethylpyridine-3,5diyl] dicarbonyldihydrazine carbothiomides (75). Compound (75) finally provided (76) on reacting with ClCH2COOH and CH3COONa. All the reaction were carried by conventional as well as microwave method. The potent antimicrobial effects of the synthesized compounds were also investigated [27]. 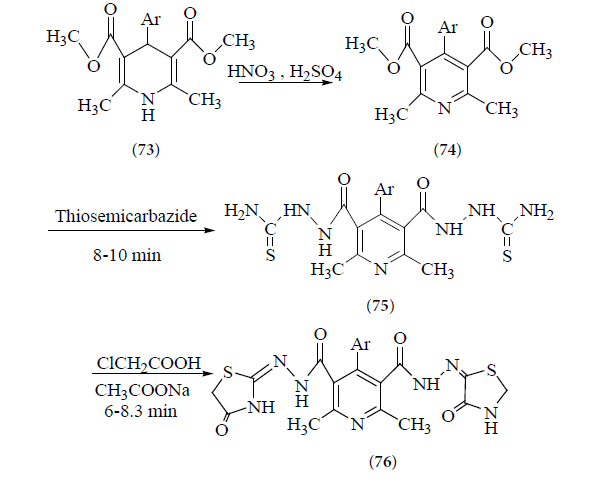 Talesara et al. also synthesized 2-amino-5-(4'-pyridyl)-1,3,4-thiadiazole (81) by cyclization of iso nicotinoyl thiosemicarbazide (80) with conc. sulphuric acid. When (81) was refluxed with various aldehydes. It gave the corresponding arylidene derivatives (82) which on further treatment with mercaptosuccinic acid furnished thiazolidinone derivative (83). Another thiazolidinone derivative 2-isonicotinoylhydrazido-1,3-thiazolidinone (84) was obtained by the successive treatment of isonicotinoylthiosemicarbazide (80) with chloroacetic acid in the presence of sodium acetate [29]. 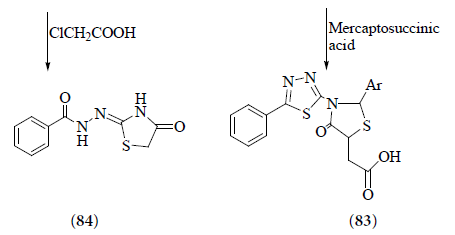 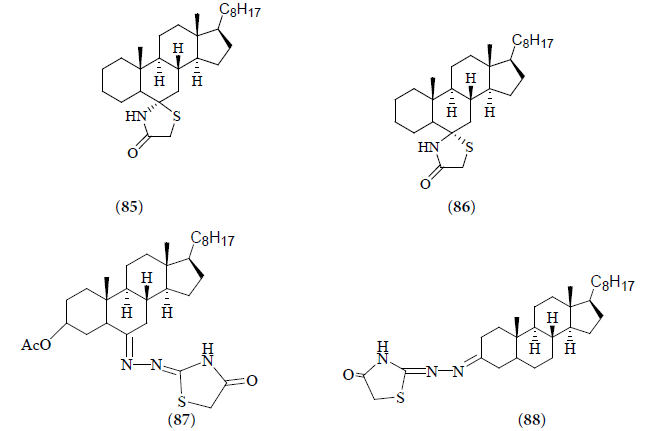 Zhou et al. reported the synthesis of library of 2-Arylimino-5-arylidene-thiazolidin-4-ones (101) by reacting 2-Arylimino-thiazolidin-4-ones (100) with different benzaldehydes. The compound (100) was obtained after reacting chloroethyl acetate with primary thiourea (99) in presence of sodium acetate. The compound (99) was obtained by the reaction of primary anilines (97) and NH4SCN in 10 mL of 6 N HCl or from the rection of corresponding thiourea (98) with NH3 H2O. These compounds selectively killed both non-small cell lung cancer cell line H460 and its paclitaxel-resistant variant H460taxR at an IC50 between 0.21 and 2.93 μM while showing much less toxicity to normal human fibroblasts at concentrations up to 195 μM [34]. In this article we have mentioned the different routes for the synthesis of thiazolidinone derivatives. The steps included condensation followed by cyclization or multi component reaction (MCR), either in a step-wise manner or in one pot has been achieved successfully to obtain the aforementioned class of heterocycles under different conditions. Most of the preparative methods included mercaptoacetic acid, thiolactic acid, chloroacetyl chloride, potassium thiocyanate, ethylchloro acetate and ammonium thiocyanate are the most common reagents for the synthesis of thiazolidinone appended on different heterocyclic skeletons. Also many series of substituted thiazolidinone -fused five membered heterocycles possessing N-, S- and O- have been constructed in potential yields and with conventional methods. Hence these protocols provide convenient strategies to annelate different heterocyclic nuclei with widespread bioactive thiazolidinone thereby extending the categories of heterocyclic systems. These strategies may also provide valuable information for the further design and development of more active biological agents through various modifications and derivatizations.

Authors (AMD and AM) thank Dr. Shamsuzzaman, Professor of Chemistry, AMU Aligarh, for useful discussions during the literature survey and University Grants Commission for providing research fellowship for successful completion of this work. Author (AM) is thankful to the Chairperson, Department of Pharmacy, UST, Sana’a, Yemen.