The global market for antibody-based drugs is expected to double within a decade given their clinical success against diseases where conventional therapies fail. Our studies of antibody structure and function have revealed subtle differences in the role of VH and VL domains in antigen recognition and virus neutralization functions. Studies of bovine antibody fragments, such as, scFv (single chain fragment variable) highlight how a single substitution mutation in the framework-3 may influence viral neutralization potency. The viral neutralization potency of bivalent diabody, i.e., dimerized scFv, is almost doubly enhanced when compared to its monomeric form as scFv. Further scFv multimerization as tri- and tetrabody does not necessarily enhance virus neutralization function. Future design of antibody-based drugs should take into consideration subtle structural modifications in the framework regions that may influence the desired function.

Antibody, nature’s most magnificent molecule, has come of age moving forward from an era of polyclonal and monoclonal antibodies to its applications as functional antibody fragments or modifications thereof for developing new drugs against vexing diseases, such as, cancer and viral infections [1-4]. The conventional therapies against these diseases have not been successful resulting in a shift towards development of novel antibody-based therapeutics. The clinical success of antibodies can be assessed from their major commercial impact as evidenced by the market for antibody drugs being over $60 billion in 2013, which is expected to double globally within the decade.

Role of VH and VL in Antibody Functions

Our laboratory was the first to develop bovine single chain fragment variable (scFv) using VH and VL from an IgG1 antibody against bovine herpes virus type 1 (BoHV-1) [14,15]. The VH and VL linked with a flexible 18 amino acid linker (GQS2RS3G3 S2 G3S) in VL-VH orientation allowed proper VH+VL pairing to form a monomeric single chain fragment variable (scFv-18L; Figure 1) with a single antigenbinding site. Indeed, scFv-18L recognized and neutralized BoHV-1 in vitro at molar concentrationsμ as low as 0.18 M. The structural and functional dynamics of the framework regions of the bovine antibody are influenced by the 3rd framework region (FR3) as it has high AGPY: TCN (mutational hot spots) as well as high (A+T): (G+C) ratio [16]. For these reasons, we tested in parallel the antigen recognition and viral neutralization dynamics of a scFv-18L with a substitution mutation at position 98 of FR3 (Asp to Gly; prior to anchor residue), designated as scFv4m-18L. Both wild type scFv-18L and mutant scFv4m-18L recognized the target epitope on the envelope of BoHV-1 in an immunofluorescence assay. Hence, the qualitative antigen recognition function was not affected by the single substitution mutation in the FR3 of mutant scFv. Importantly, the single substitution mutation in the FR3 affected the virus neutralization potency by 2.7 folds as compared to the scFv4m-18L [15]. 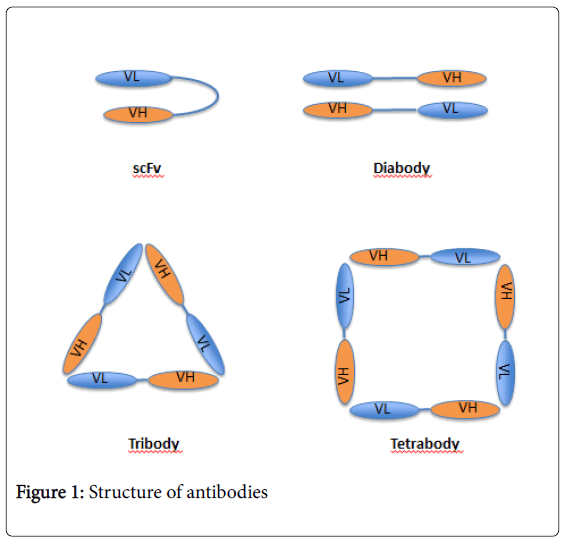 The single substitution mutation in FR3 would not have been expected to influence viral neutralization potency to such a large extent as both the wild type and mutant scFv had identical CDRs, including the CDR3H that mainly makes contact with an epitope. Such a remarkable decrease in viral neutralization potency as a result of single substitution mutation in the FR3 suggests subtle influence of framework regions on the configuration of the antigen-binding site where it seems to stearically affect contact between the residues during epitope-paratope interaction [15]. Nevertheless, this requires a direct evidence of such an outcome by crystallographic structural analysis. These are important lessons for designing antibody-based drugs based on these observations where the role of framework regions in modulating epitope-paratope interactions should not be excluded. Rather structural composition of various framework regions should be taken into consideration in antibody based drug design for an optimized and refined development of next generation of antibodybased drugs with a high specificity.

Glycosylation does not Affect Antibody Functions

The construction and expression of various antibody fragments using different microbial and mammalian systems is discussed elsewhere [21-26], each with its own advantages or disadvantages. Certain protein expression systems, such as, Pichia pastoris , cause extensive glycosylation of the expressed recombinant antibody fragments. We did not observe that glycosylation introduced by P.pastoris affected antigen recognition and viral neutralization functions of recombinant scFvs or single domains. There is a caveat with regard to the Ni chelating affinity purification, however, as diabodies, tri- and tetrabodies are relatively difficult to purify because of commonly experienced protein aggregation and cleavage or degradation of histag.

Based on studies with the bovine antibody fragments in our laboratory, it is appropriate to conclude that future design of antibodybased drugs should take into consideration subtle structural modifications that could affect antigen recognition and viral neutralization functions. At the same time, it is possible to optimize functions of an antibody or its fragments by optimizing framework residues or including the constant domain. In addition, there exist limits to enhancing scFv viral neutralization potency via multimerization since no significant differences exist in terms of molar concentration beyond bivalent diabody when compared to tri- and tetrabodies. Such fine functional subtleties of scFvs and their multimers would be obvious once their 3-dimensional structural properties, including conformational flexibilities, are fully defined.

Copyright: © 2016 Sachan A, et al. This is an open-access article distributed under the terms of the Creative Commons Attribution License, which permits unrestricted use, distribution, and reproduction in any medium, provided the original author and source are credited.