Background: It is known that twin pregnancy caries higher risks to the mother and her fetuses. More importantly, its occurrence in septate uterus seems to carry more fatal complications. This case report is presented to show the occurrence of spontaneous twin pregnancy in septate uterus and successful expectant management of cotwin death in this type of uterine malformation.
Case Presentation: A 25-year-old primigravid mother with septate uterus admitted to hospital at gestational age of 33 weeks + 4 days with diagnosis of cotwin death. She was on expectant management until 37 weeks at which time cesarean section was done to delivery alive baby.
Conclusion: Spontaneous twin pregnancy can occur in septate uterus. This pregnancy, like the one in normal uterus, can be complicated by cotwin death which possibly be expectantly managed until fetal lung maturity is achieved.

Congenital uterine anomalies are malformations of uterus that develop due to disturbances in development, formation or fusion of Mullerian ducts during embryonic life [1-3]. The incidence of Müllerian duct anomalies in women is about 1% to 3% [2]. Septate uterus is one of the most common types of congenital uterine anomalies [2,3]. It is a kind of uterine malformations where there is a septum from the fundus forming two compartments. It can be categorized into complete septate groups in which case the septum extends from fundus to the cervical of forming separate uterine cavity, no matter equal or unequal, or subseptate groups where the septum projects minimally from the uterine fundus [4]. It is associated with poor reproductive outcomes including recurrent spontaneous abortion, stillbirth and preterm birth resulting in fetal survival rate of 6% to 28% and a high rate of spontaneous abortion as high as 60% [5,6].

There are few reported cases of twin pregnancy in septate uterus [7]. Twin pregnancy, even in normal uterus, is related with a number of fetal and maternal complications. Cotwin death is one of fetal complications the incidence of which can be as low as 0.5% and as high as 21.5% [8,9].

A 25-year-old primigravid mother at gestational age of 33 weeks + 4 days from reliable last normal menstrual period visited Gimbie Adventist Hospital for further evaluation as she was diagnosed to carry twin fetuses with 3rd trimester ultrasound at private clinic in the town. She denies family history of twin pregnancy. She does not have any major complaints other than minor pregnancy related symptoms. She was having regular monthly menstrual flow and there were no complaints prior to the index pregnancy. She has neither 1st trimester ultrasound examination nor other imaginings like hysteroscopy or hysterosalpingography prior to pregnancy.

On examination, her vital signs were within the normal ranges. Abdominal exam showed term sized gravid uterus, palpable multiple fetal poles and fetal heart beat (FHB) was detected only on the lower left side of the uterus which was 140 beats per minute. There was no other pertinent finding in other systems.

Her obstetrics ultrasound examination showed twin intrauterine pregnancy with two separate placentas and thick membrane like structure running from the fundus to the cervix. Twin A (left side fetus) was in Cephalic presentation with reassuring biophysical profile and aggregate gestational age of 33 weeks+6 days. Twin B (right side fetus) was in breech presentation, negative FHB and aggregate gestational age of 32 weeks+5 days. No gross fetal anomaly was seen in both twins.

With the impression of third trimester twin pregnancy with cotwin death and to rule out septate uterus, she was admitted to ward and four doses of dexamethasone 6 mg intramuscularly 12 hours apart were administered to facilitate fetal lung maturity. Based on client request, it was decided to have outpatient follow up with biophysical profile twice in a week and Complete blood count on weekly basis up to 37 completed weeks.

At 37 weeks of Gestational age, elective lower uterine segment cesarean section was done with the finding of twin pregnancy in different compartment of septate uterus (Figure 1). There were two separate placentas in each compartment (Figure 2). The right compartment was containing grade-III macerated dead female fetus weighing 2000 gms. The left compartment was carrying alive male fetus weighing 3000 gm with Appearance, Pulse, Grimace, Activity and Respiration (APGAR) score of 7 and 9. The uterine septum was thick and extending from fundus to isthmic part of the uterus (Figure 1) and it was left untouched. None of the placentae were attached to the septum. Uterine incision was closed in two layers. After hemostasis secured and correct count of materials reported, abdomen closed in layers. The mother and her newborn were discharged on 4th post-operative day with good condition after she was informed about the uterine finding and its possible obstetric and/or gynecologic effects in the future pregnancy (ies). 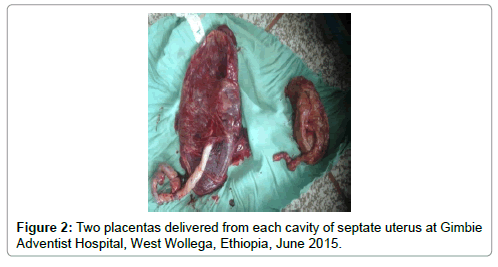 Septate uterus is one of the most common types of congenital uterine anomalies [2,3] and its septum is categorized as partial or complete as in this case. It is associated with poor reproductive outcome [3]. Like in normal uterus, twin pregnancy can also occur in both compartments of septate uterus [7]. This could be explained by the possible occurrence of fertilization in both uterine tubes with subsequent implantation in respective cavity or fertilization in one of the tubes followed by division of zygote into two. Implantation in the contralateral cavity is possible when there are tiny channels in the septum [7].

Diagnosis of uterine malformations is usually made by threedimensional ultrasound, hysterosalpingography and/or magnetic resonance imaging when patients present with poor reproductive outcome [3,8]. In our patient the diagnosis was considered with the help of obstetrics ultrasound and confirmed at cesarean section which was done for cotwin death at term after she was on conservative management.

This patient carried one of the fetuses to term which could be explained by the fact that implantation was to the endometrium; not to the septum which could have made growth of the fetus very difficult. But death of the other twin is so striking with regard to its cause and management. This complication, in patients with normal uterus, usually common in monochorionic twins where there is abnormal vascular communication between twin fetuses [8]. But cotwin death in this case possibly resulted either from inadequate space imposed by the alive fetus in the other compartment or due to local problem in that fetus.

Expectant management of death of one of the fetuses is usually controversial as it could theoretically trigger coagulation defects in the mother and/or affect alive fetus from some vascular communication between the fetuses [8]. But in septate uterus, particularly in complete one, conservative management of cotwin death is possible as fetuses are in different compartments if there is no maternal condition necessitating immediate delivery as we did in our case.

A bilateral caesarean section is the norm when there is a uterine septum extending to the lower segment and an obstetrician should attend this operative delivery because unexpected complications may arise [10]. But in our patient single uterine incision was made as it was not technically possible. In this case, the septum was left unintervend due to the fact that it is not always associated with poor obstetric performance as in our patient. However, when a septate uterus is associated with adverse reproductive outcome, surgical intervention should be considered [5,11].

Spontaneous twin pregnancy can occur in septate uterus. This pregnancy, like the one in normal uterus, can be complicated by cotwin death which possibly be expectantly managed until fetal lung maturity is achieved.

Copyright: ©2018 Bekabil T, et al. This is an open-access article distributed under the terms of the Creative Commons Attribution License, which permits unrestricted use, distribution, and reproduction in any medium, provided the original author and source are credited.