Synthesis, Antitubercular and Antibacterial Activities of Some Quinazolinone Analogs Substituted with Benzothiophene

Copyright: © 2015 Rao GK, et al. This is an open-access article distributed under the terms of the Creative Commons Attribution License, which permits unrestricted use, distribution, and reproduction in any medium, provided the original author and source are credited.

A novel series of 3-chloro-N-(4-oxo-2-arylquinazolin-3(4H)-yl)-1-benzothiophene-2-carboxamide analogs derived from 3-amino-2-arylquinazolin-4(3H)-one have been synthesized in good yields and characterized by IR, 1HNMR, mass spectral and elemental analyses. All the compounds were evaluated for their in vitro antibacterial activity against Gram-positive and Gram-negative bacteria and were also screened for antitubercular activity against Mycobacterium tuberculosis H37Rv strain by microplate alamar blue method. The compounds 3b and 3h showed good antitubercular and the compound 3a exhibited good antibacterial activity.

Tuberculosis (TB) is a major and challenging health problem around the world and the current survey reveals that about two million deaths are caused annually due to the highly infective acid fast bacilli Mycobacterium tuberculosis. Tuberculosis is mostly asymptomatic and is aggravated when impairment of immunity arises due to conditions like malnutrition, diabetes, malignancy and AIDS. The last condition is susceptible to Mycobacterium avium complex (MAC) [1]. Drugs for treating tuberculosis have been available for over half a century, and yet the incidence of disease worldwide continues to rise year by year. Coinfection with human immunodeficiency virus is driving the increase in incidence and the cause of death in 31% of AIDS cases can be attributed to TB. When coupled with the emergence of multidrugresistant (MDR-TB) and the extremely-drug resistant (XDR-TB) strains of Mycobacterium tuberculosis the scale of the problem become clear, as it will inevitably become even more difficult to treat TB in the future. It is now more than a decade since the World Health Organization declared TB “a global health emergency”. The need for new drugs to extend the range of TB treatment options is acute. New chemical entities with novel mechanism of action will most likely possess activity against MDR-TB and XDR-TB. However, this alone will not provide the breakthrough that is needed. The key to improving therapy is to develop new agents with potent sterilizing activity that will lead to a shortening of the duration of chemotherapy. The terms “hit” and “lead” are widely used in drug discovery, but there is little generality applied to the criteria used to define either term, or sometimes, even to those that differentiate them. The term hit is used to describe individual or small numbers of structurally related molecules that have established antitubercular activity regardless of other important drug discovery considerations. Leads are defined by molecules within a series that display a more substantial structure-activity relationship (SAR) around a given hit, coupled with other important factors such as evidence of selectivity and pharmacokinetic data. In an effort to try and quantify the attractiveness of a given hit or lead, we have used calculated physicochemical parameters as a means of predicting the drug likeness of a compound possessing a desirable pharmacokinetic profile [2]. Use of small molecules in the current treatment regimen and also our continuous effort to synthesize novel antitubercular molecule [3-5] encouraged us to work on quinazolinone derivatives.

Melting points were measured in open capillary tubes and are uncorrected. IR (KBR) spectra were recorded in film or in potassium bromide disks on a Perkin-Elmer 39 spectrophotometer (υ max/ cm) and 1H NMR spectra on a DPX 300 MHz Bruker FT-NMR spectrophotometer. The chemical shifts were reported as parts per million (δ ppm) using tetramethyl silane (TMS) as internal standard. Mass spectra were obtained on a JEOL-SX-102 instrument using fast atom bombardment (FAB positive). The progress of the reaction was monitored on a readymade silica gel plates (Merck) using n-hexane: ethyl acetate as a solvent system. Spectral data (UV, IR, 1HNMR and Mass spectra) confirmed the structure of the synthesized compounds and the purity of these compounds were ascertained by microanalysis.

Synthesis of 3-Chloro-1-benzothiophene-2-carbonyl chloride (iii): A stirred mixture of cinnamic acid (3.7 g), pyridine (0.2 ml), thionyl chloride (7.5 ml) and chlorobenzene (15 ml) were heated under reflux for 3 days. Excess thionyl chloride was removed under reduced pressure and the remaining material was suspended in hot hexane and then filtered. The filtrate was treated with charcoal, allowed to cool and then the precipitate formed was collected by filtration.

Synthesis of 3-Chloro-N-(4-oxo-2-arylquinazolin-3(4H)-yl)-1- benzothiophene-2 carboxamide (3a): 3-Amino-2-arylquinazolin- 4(3H)-one (1.18 g, 0.0050 m) was taken in a round bottom flask and dissolved in dry pyridine (25 ml), 3-chloro-1-benzothiophene-2- carbonyl chloride (1.38 g, 0.0060 m) was added and refluxed for 8 h. The reaction was monitored by TLC. After the completion of reaction, the contents were cooled and poured into ice-cold water with stirring, the solid obtained was filtered at pump, thoroughly washed with water, dried and recrystallised from ethanol. All other derivatives of the series (3b-K) have been synthesized by similar procedure and shown in (Figure 1). 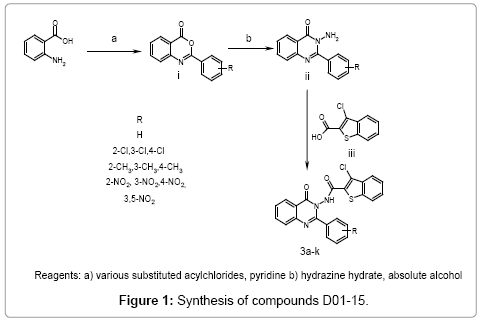 The synthesized compounds (3a-k) were screened for the in vitro anti-tubercular activity against Mycobacterium tuberculosis H37Rv by Microplate Alamar Blue Assay (MABA) method [7]. The compounds 3b and 3h with 2-chloro or 2-nitro substituted phenyl at 2nd position of quinazolinone moiety have shown significant activity at a concentration of 6.25 and 12.5 μg/ml respectively, while all other derivatives showed the activity at or above 25 μg/ml The results are shown in Table 1. 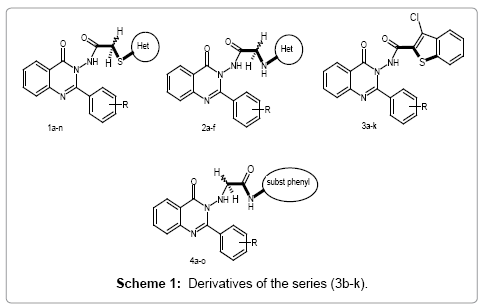 Table 1: Antitubercular and antibacterial Activity of the compounds 4a-k.

In our continuous effort to synthesize some novel quinazolinone compounds as antitubercular agents, herein we report a series of benzothiophenoquinazolinone molecules. In our earlier study [3] we have synthesized a series of compounds containing oxadiazole system in the side chain linked to the quinazolinone moiety through thioacetamide group (-NHCOCH2S-) (1a-n), these compounds have been found to show antitubercular activity at a MIC value of 25- 100 μg/ml, then we replaced the oxadiazole system with pyrimidine, pyridine, thiazole and triazole [9] heterocyclic systems and linked it through acetamide group (-NHCOCH2NH-) to the quinazolinone moiety (2a-f) and screened the antitubercular activity which was also in the range of 25–100 μg/ml. As the antitubercular activity of both the series of compounds were in the same range we thought to replace the heterocyclic rings (oxadiazole, pyrimidine, pyridine, thiazole, triazole) with simple substituted phenyl system and attach to the quinazolinone moiety through the acetamide group (-NHCH2CONH-) but with the change in the position of NHCO-group(4a-k). It was interesting to find that these compounds with acidic protons in the side chain with simple phenyl substitution showed encouraging results against Mycobacterium tuberculosis with the MIC value in the range of 0.2- 1.6 μg/ml which was comparable to the standard drugs [5]. In the present study, we thought to synthesize a novel series of quinazolinone derivatives with benzothiophene substitution in the side chain (3ak). It was interesting to observe that these compounds have shown activity which is higher than the (1a-n) compounds, however lesser than (2a-f) showing that the thioacetamido substitution has probability of existing as isomers (rotation) while the compounds (3a-k) have restricted rotation (frozen) and does not exist as isomers. Probably due to the nonexistence of isomeric form and the structure being frozen, these molecules would have shown better activity than (1a-n) series. However, the activity of the molecules of current study (3a-k) is not as encouraging as (4a-o) that possess substituted phenyl ring in the side chain. Hence, it is evident that for the molecules to show antitubercular activity it is essential to have acidic protons in the side chain that is attached to the quinazolinone moiety.