Synthesis of Bioactive Imidazoles: A Review

Copyright: © 2015 Gupta P, et al. This is an open-access article distributed under the terms of the Creative Commons Attribution License, which permits unrestricted use, distribution, and reproduction in any medium, provided the original author and source are credited.

Heterocyclic compounds are acquiring more importance in recent years because of their pharmacological activities. The imidazole nucleus is an important synthetic strategy in drug discovery. Imidazole is a planar fivemember ring system with N atom in 1 and 3 positions. The systemic name for the compound is 1, 3 diazole, one of the N bear an H atom and other to be regarded as a pyrrole type N. Imidazole was first named as glyoxaline. It is amphoteric in nature, susceptible to electrophilic and nucleophilic attack. It also occurs in the purine nucleus & amino acid histidine, 4-amino-imidazole-5-carboxamide occurs naturally as a riboside. This interesting group of heterocyclic compound has diverse biological activities such as antimicrobial, anticancer, analgesic, anti-inflammatory, antiviral, anthelmintic, anticonvulsant, antiulcer, anti-allergic activity etc. Numerous methods for the synthesis of imidazoles and also their various structure reactions offer enormous scope in the field of medicinal chemistry. This articles aims to review the work reported, their chemistry and pharmacological activities of imidazole during past years.

Heterocyclic compounds are also used in pharmacy and agriculture. Analysis of scientific papers in the last two decades revealed that there is a general trend in research for new drugs involving modification of existing biologically active matrices and molecular design of the structures of compounds. The imidazoles nucleus is an important synthetic strategy in drug discovery. Imidazole derivatives exhibited antimicrobial, anti-inflammatory, analgesic, anti-tubercular and anticancer activity. One of the most important application of imidazole derivatives is their use as material for treatment of denture stomatities. The high therapeutic properties of the imidazole related drugs have encouraged the medicinal chemists to synthesize a large number of novel chemotherapeutic agents. Imidazole drugs have broadened scope in clinical medicines. Medicinal properties of imidazoles include anticancer, anticoagulants, anti-inflammatory, antibacterial, antifungal, antiviral, antitubercular, antidiabetic and antimalarial [1-7]. Imidazole and its derivatives are reported to be physiologically and pharmacologically active and find applications in the treatment of several diseases. Imidazole is an organic compound with the formula (CH) 2 N (NH) CH. It is a colourless solid that dissolves in water to give mildly basic solution. In chemistry, it is an aromatic heterocycle, classified as a diazole and as an alkaloid. Imidazoles are a common component of a large number of natural products and pharmacologically active molecules (Figure 1) Imidazole was first synthesized by Heinrich Debus in 1858, but various imidazole derivatives [8-11] have been discovered as early as the 1840s, it used glyoxal [12] and formaldehyde [13,14] in ammonia to form imidazole. This synthesis, while producing relatively low yields, is still used for creating C-substituted imidazoles [15].

Imidazoles containing free imino hydrogen and a substituent in the 4- and 5- position, or two dissimilar substituents in these positions, might be expected to occur in the isomeric forms. These isomers differ in the position of the imino hydrogen which may be attached to either of the two nitrogen atoms.

Over the years, the imidazole nucleus has attracted the attention of the scientific community due to its chemical and biological properties [16,17]. For example, this nucleus is present in the structures of several natural products in the form of the essential amino-acid histidine or in alkaloids exhibiting anti-tumoral, anti-cancer (dacarbazine), antihistaminic (cimetidine), anti-parasitic (metronidazole), and antihypertensive (losartan) and anti-bacterial activities [18-20]. A great numbers of medicines contain the imidazole nucleus, including ketoconazole which are used to treat fungal infections, bacterial infections, and gastric ulcers, respectively (Figure 2) [21,22]. Due to their importance, it has become an attractive target for the synthetic and medicinal chemist. There are many synthetic methodologies that have been developed for assembling and decorating the imidazole ring with diverse functional groups. 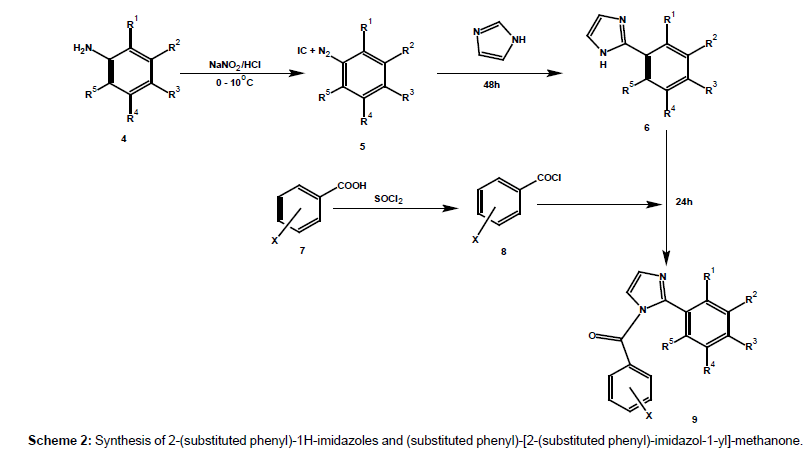 Pandya et al. [25] also reported a simple and concise route for the synthesis of highly substituted imidazole derivatives 12 have been developed by the reaction of 10 with aromatic aniline 11 via coppermediated oxidative C–H functionalization in good to high yields. The advantage of the reaction lies in its mild reaction conditions and readily available starting materials (Scheme 3).

Kathrotiya et al. [27] reported a series of some new quinoline based imidazole-5-one derivatives 19, 21 have been synthesized by the fusion of oxazol-5-ones 17, with various p-substituted anilines 18, 20 and zeolite in pyridine (Scheme 5).

Scheme 5: Synthesis of some new quinoline based imidazole-5-one derivatives. 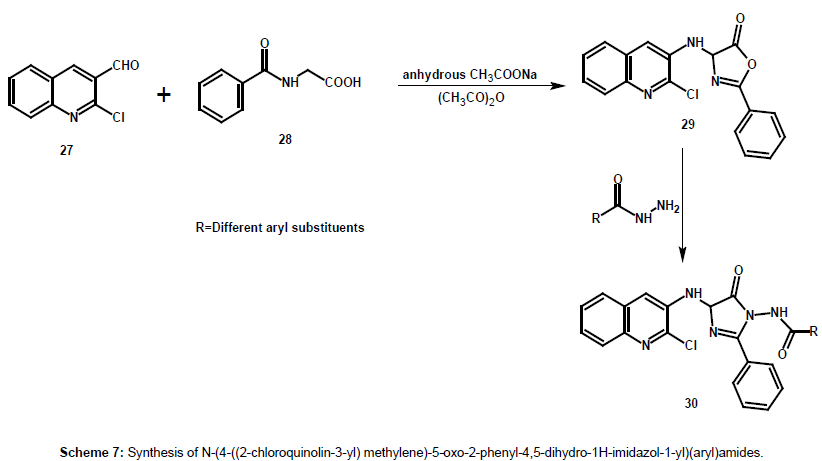 Li et al. [30] have been synthesized trisubstituted imidazoles 33 by the reaction of 1, 2-di (furan-2-yl)-2-oxoethyl carboxylates 31 in presence of RCOCl they form an intermediate 32 then it is converted into the synthesized compound (Scheme 8).

Chen et al. [31] reported a series of 1-R1-2-R-4, 5-di (furan-2-yl)- 1H-imidazole derivatives 39 were synthesized in multisteps. Reaction start with furan-2-carbaldehyde 34 and vitamin B1 to gave 1, 2-di (furan-2-yl)-2-hydroxyethanone 35. 35 react with benzyl chloride or allyl chloride and pyridine to form an intermediate 36, it were react with sodium acetate and gave substituted difuran imidazole 37. This was followed by NaH/THF to form the final compound 38 (Scheme 9). 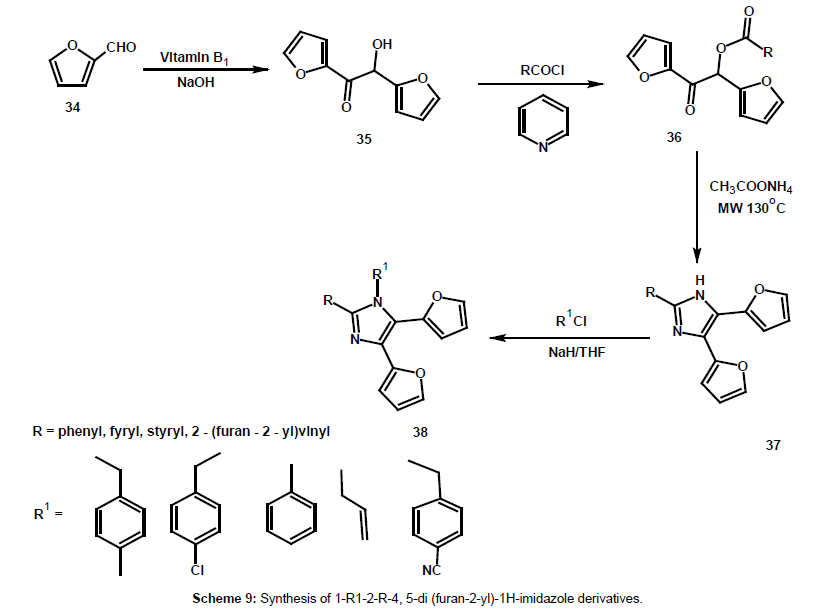 Prabhu et al. [35] reported another series of some novel aryl imidazole derivatives 57 were prepared by the condensation of compounds containing primary aromatic amine 52 and aryl aldehydes 53 to give respective Schiff’s bases 54, which was further reacted with ammonium acetate 55 and isatin 56 in the presence of glacial acetic acid (Scheme 13). 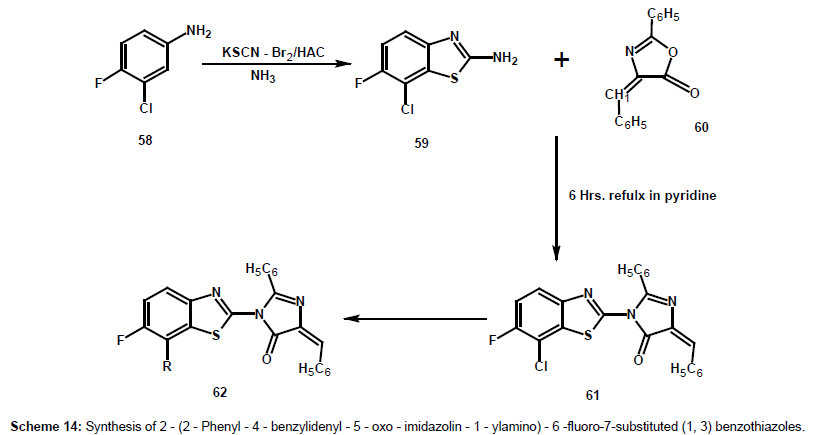 Stella et al. [37] reported an efficient and practical synthesis of imidazolyl derivatives 65 were achieved through thiocyanation of aniline derivatives 63 to gave the intermediate 64 which followed by the reaction with ethylene diamine in the presence of carbondisulphide (Scheme 15). 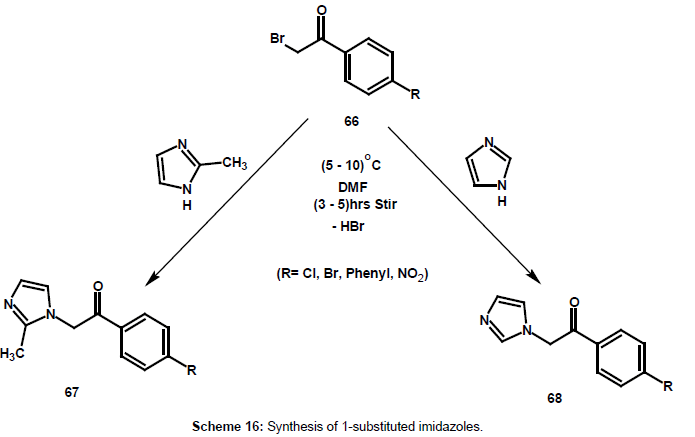 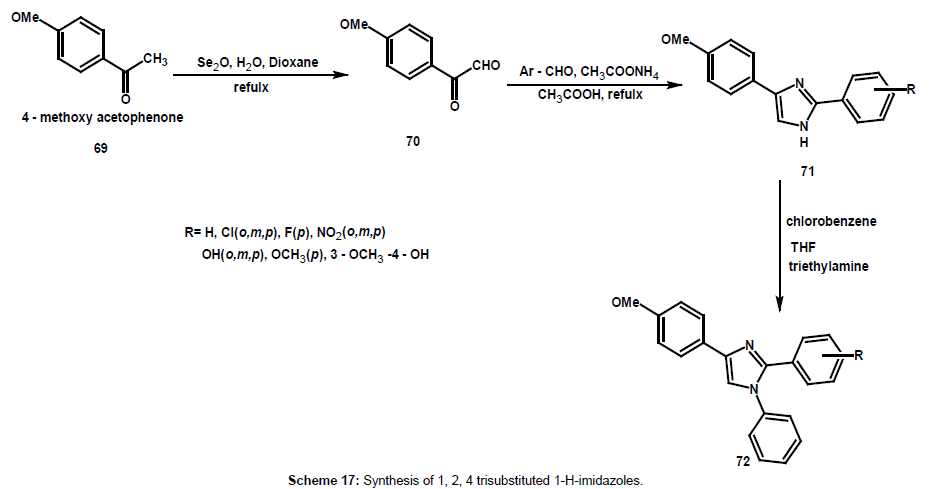 Imidazole and their derivatives are still the most widely used in the therapeutic areas and have shown a broad spectrum of activity against various pathogens. Since the discovery of various drugs contain the imidazole nucleus, including ketoconazole, metronidazole and cimetidine, which are used to treat fungal infections, bacterial infections and gastric ulcers, respectively. On the basis of various literature surveys imidazole derivatives shows various pharmacological activities (Table 1).

Imidazole is a five membered heterocyclic compound. There were so many different conventional methods to synthesize imidazole and its derivatives. On the basis of the literature it was found that imidazole was synthesized under solvent free condition and refluxing method with the help of efficient and different catalyst and without catalyst with good yield. Imidazole is a base in nature due to nitrogen atom. It under goes electrophilic substitution but nucleophilic substitution is rare one. From the extensive literature survey it was found that it has antimicrobial, anticancer, analgesic , antiinflammatory, anticonvulsant, antiviral, anthelmintic, antiulcer, antiallergic activity etc. So from the above discussion it can be concluded that imidazole is a therapeutically active versatile moiety, which had been exploited in the past years for synthesizing various compounds having diverse pharmacological activities, and still imidazole can be further utilized for the future prospective against various diseases or disorders.

We are grateful to the Head of the Department, School of studies in Chemistry, Jiwaji University Gwalior and Dean, Birla Institute of Medical Research and College of Life Sciences, Gwalior.