Copyright: © 2013 Shen YC, et al. This is an open-access article distributed under the terms of the Creative Commons Attribution License, which permits unrestricted use, distribution, and reproduction in any medium, provided the original author and source are credited.

Terahertz (THz) waves are a form of electromagnetic wave, like gamma-rays, X-rays, ultraviolet light, visible light, infrared light, radio and microwaves (Figure 1). On the frequency spectrum, the THz region of the electromagnetic spectrum spans the frequency range between the microwave and the mid-infrared (300 GHz - 30 THz). The center portion of the THz region offers an unique combination of many remarkable properties: (1) like infrared radiation, THz radiation gives rise to individual ‘fingerprints’ spectra for many crystalline materials, making THz spectroscopy a useful tool for material characterization; (2) like microwave, THz radiation can penetrate deep into most polymer and clothing materials, thus THz imaging can be used to map internal structures of a sample; (3) it is safe to use THz radiation as its photon energy is millions of times smaller than that of X-rays. The combination of these properties makes THz technology a potentially very powerful technique for a range of imaging and spectroscopy applications. However, historically the exploitation of this THz spectral region has been difficult owing to the lack of suitable source and detector. There has therefore been considerable interest in the development of THz technology, in particular when considering that the technology development of its neighboring spectral regions (e.g., optical and microwave frequency) has resulted in the birth of new industrials.

Figure 1: Schematic diagram showing the location of THz band in the electromagnetic spectrum (reproduced from [1]).

With the advances in material research and ultrafast laser technology, the past twenty years have seen a revolution in THz devices and systems [1-4]. Of particular significance is the development and commercialization of THz time-domain spectroscopy (THz-TDS) and THz time-domain imaging (THz-TDI) systems. The core technology behind both THz-TDI and THz-TDS is the coherent generation and detection of short pulses of broadband THz radiation by using ultrafast femtosecond laser. To date, the most commonly used device for the generation of ultrashort THz pulses is photoconductive antenna [5]. In this technique, a biased photoconductive antenna (THz emitter antenna) is illuminated using an above-band gap femtosecond pulse of near-infrared light (Figure 2). Electron-hole pairs are generated in GaAs semiconductor crystal, and these photo-generated carriers are then accelerated by the applied electric field. The physical separation of the electrons and holes forms a macroscopic space-charge field oriented opposite to the biasing field, and thus, the total net electrical field undergoes rapid changes. The fast temporal change in electric field produces a transient current, which generates a pulse of electromagnetic radiation in the THz frequency range. The photoconductive antenna can also be used for the detection of the THz pulse. In contrast to the THz emitter antenna, the THz detector antenna is not biased. The photo-generated carriers are actually driven by the electric field of the incident THz pulse, and the resultant photocurrent is proportional to the time integration of the product of the incident THz electric field and the total number of photo-generated carriers in the photoconductive antenna. In the limit of an ideal photoconductive antenna with carrier lifetime much shorter than the duration of the THz pulse, the detected photocurrent is directly proportional to the THz electric field strength [6]. 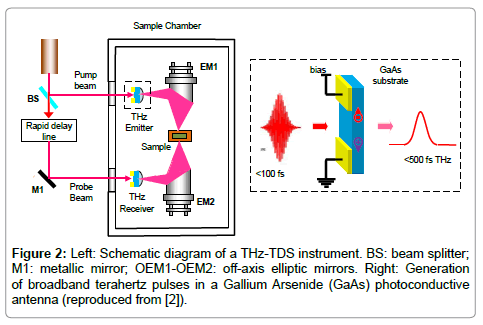 Figure 2 shows the schematic diagram of a typical THz-TDS instrument. In brief, a beam splitter separated the near-infrared light into two beams: an excitation beam and a probe beam. The excitation beam is used to pump a THz emitter antenna for generating a short pulse of broadband THz radiation. The generated THz pulse is focused and transmitted through the sample, before being detected using a THz receiver antenna which is gated by the probe beam from the same ultrafast laser system. In this way, the time-resolved electric field of the THz pulse could be recorded by scanning the time-delay between the THz pulse and the near-infrared probe beam using a variable delay stage. For quantitative spectral measurement, the time-resolved electric field of THz pulses before and after propagating through a sample is measured. The THz pulse transmitted through the sample is modified by the dispersion and absorption of the media under examination. Both the absorption coefficient and the refractive index of the sample could be extracted from the measured THz signal without the need for the Kramers-Kronig transformation [3].

This coherent generation and detection of pulsed THz radiation offers two remarkable advantages. Firstly, this technology directly measures the transient electric field, not simply the intensity of the THz radiation. This yields THz spectrum with far better signal to noise ratio and dynamic range as compared with the Fourier Transform Infrared Spectroscopy (FTIR) method. High quality THz spectrum is now routinely obtained in less than 20 ms without the need for cryogen cooled bolometer, making THz spectroscopy more easily and widely accessible. Secondly, the use of pulsed radiation and the associated coherent detection scheme preserves the time-gated phase information, upon which THz imaging has been developed for characterizing the internal structures of a sample quantitatively and non-destructively.

THz spectroscopy technology-spectral fingerprints: Absorption features within the mid-infrared region are dominated by intramolecular vibrations of sample molecules thus mid-infrared spectral features are “molecule fingerprints”. In contrast, absorption features in THz region are dominated by inter-molecular vibrations, corresponding to motions associated with coherent, delocalized movements of large numbers of atoms and molecules [7,8]. Such collective phonon modes only exist in materials with periodic structure. In this sense, THz spectral features are “crystal fingerprints”, and materials with identical molecular structures but different crystal forms (so-called crystal polymorphs) are expected to have different THz spectrum. Consequently THz spectroscopy is an excellent technique for characterizing the crystalline properties of solid materials, as the phonon lattice modes are probed directly. The spectral fingerprints at THz frequency range have been used for characterizing Active Pharmaceutical Ingredients (API), monitoring of dynamic process of co-crystal formation and solid phase transformations, detection and identification of explosives, to name a few [8-11].

THz imaging technology-imaging at depth: many common polymer and clothing materials are semi-transparent to THz radiation therefore THz radiation will be able to penetrate into a sample. At each interface or change in refractive index, portion of the THz radiation will be reflected/scattered back. By sending a pulse of broadband THz radiation into a sample and recording the reflected/scattered THz radiation as a function of time, one can map the inner structures and compositions of the sample. A number of imaging applications have been reported in areas as diverse as medical diagnosis of human tissue, analysis of polymer samples, industry sensor for fault detection of integrated circuit packaging in semiconductors and online and offline tablet inspection in the pharmaceutical industry among others [12-15]. Other promising applications of THz technology include general nondestructive test, THz metamaterial devices and THz electronics for energy harvesting [1-4,16,17].

In summary, the enormous inherent potential of the THz technology led to a rapid development of THz systems, and the availability of commercial THz products has opened up many exciting opportunities in academic research and industrial application. In this article I have introduced the fundamentals and main attractive features of the THz time-domain technology and some of its promising application areas. Hope that this will raise the awareness of the emerging opportunities and usefulness offered by this exciting technology as in my view THz technology has the potential to play a significant role in all these areas.