+44-1467840001
The Effect of Breastfeeding on the Cognitive and Language Development of Children Under 3 Years of Age: Results of Balochistan-Early Childhood Development Project

The Effect of Breastfeeding on the Cognitive and Language Development of Children Under 3 Years of Age: Results of Balochistan-Early Childhood Development Project

Copyright: © 2017 Iqbal M, et al. This is an open-access article distributed under the terms of the Creative Commons Attribution License, which permits unrestricted use, distribution, and reproduction in any medium, provided the original author and source are credited.

Background: Breastfeeding is known to be an important factor in the overall growth and development of children. Breastfeeding is thought to lead to enhance cognitive and language development of a child. However, this association has not yet been scientifically and statistically established. This study aimed to explore this association in children under 3 years of age.

Methods: This was a secondary data-analysis of the baseline data of “Balochistan – Early Childhood Development Project”. The final sample comprised of 604 children less than 3 years of age. The children were selected by three-stage stratified random sampling from three districts of Balochistan province; Gwadar, Quetta and Qilla Saifullah. The data for the duration of breastfeeding was categorized as less than 6 months, from 6 months to 12 months and greater than 12 months. The age appropriate language and cognitive development of children was assessed through the CDA (Care for development Appraisal) tool. We applied multivariate logistic regression model for the analysis.

Results: In unadjusted analysis, children breastfed for more than 12 months were at an advantage for cognitive and language development (cOR=2.91, cOR=2.8; p<0.05; respectively). After adjusting for a range of co-variates this developmental advantage decreased to aOR=2.42 for cognition and aOR=2.44 for language respectively (p<0.05).

According to the work by James et al. [2] breast-feeding was associated with significantly higher scores for cognitive development in children even after adjustment for appropriate key cofactors. His findings were contradicted by Asnat et al. [3] he found that much of the reported effect of breastfeeding on child neurodevelopment was due to confounding; maternal intelligence and socio-economic status being the noteworthy of the list.

As compared to cognitive development, little work has been done to see the link between breastfeeding and language development of children. Vasiliki et al. [4] pointed out that longer duration of breast feeding was associated with increased scores in cognitive, language and motor development at 18 months of age, independently from a wide range of parental and infant characteristics.

This paper uses cross-sectional data collected from 604 children participating in the baseline survey of “Baluchistan-Early Childhood Development Project”, a quasi-experimental study [6]. This study was initiated to enhance the access, equity and quality of education in class Katchi, one and two of 75 government primary schools in three districts; Gwadar, Quetta and Qilla Saifullah; of Baluchistan province. The sample was selected through three stage stratified random sampling. In the first stage, number of children studying in nearest project focus schools to FRC (Family Resource Centre) was found in each district. In the second stage, selected households in the FRC catchment areas were visited and in the third stage, family having a 0-8 year old child was selected. All stages of the project were subject to rigorous ethical review by the Ethical Review Committee of Aga Khan University. The details of the parent study are mentioned elsewhere [6].

Ideally, the causal effect of breastfeeding on the cognitive and language development of children would be assessed by a randomized control trial. Research ethics does not allow such randomization in which one group of children does not get breastfeeding, thus we are forced to use observational methods and statistical analysis to identify the effect of breastfeeding on outcome- language and cognitive development. We controlled for a large range of potentially confounding factors drawn from the “Balochistan – Early Childhood Development Project”. Chi-square and Independent sample t- test were applied for initial analysis. Uni-variate logistic regression was done to assess the effect of independent factors on outcomes. All variables with p-value<0.25 were taken for the multivariate analysis. Multicollinearity was checked between the independent variables through Pearson and Spearman correlation. For none of the variables the correlation coefficient was beyond 50%. The adjusted odds ratios were calculated in the multivariate regression by selecting the model with the smallest value of -2 log likelihood. The analysis was done using SPSS version 22 (Figure 1). 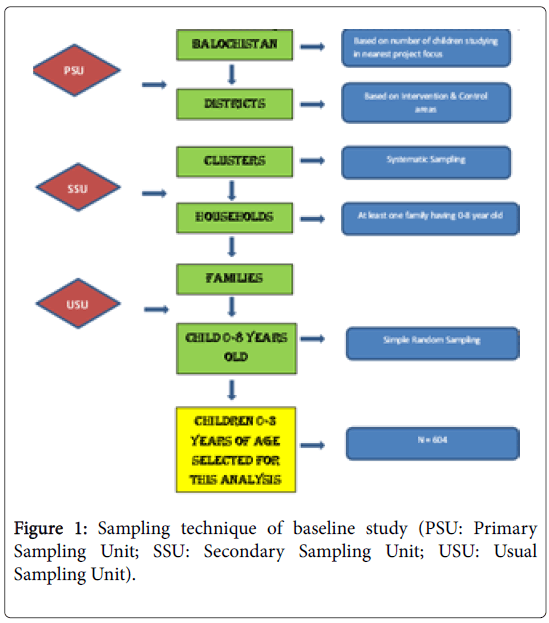 Parenteral nurturance is considered an important factor in a child’s developmental trajectory. We used the HOME (Home Observation for Measurement of the Environment) inventory to assess the quality and quantity of support and stimulation provided for children at home [8]. The HOME scale is further distributed over six subscales. Each subscale has a set of questions with a binary outcome. No cut-off points are specified in the HOME manual and the scores falling into the lowest quarter, middle half and upper quarter are reported. High scores, falling in the upper quarter category, indicate a safer and stimulating home environment for healthy child development whereas home scores falling into the lowest quarter are considered as a risk for development [8]. Frequency distributions of all responses and mean and standard deviation for all subscales were calculated. Each sub-scale was adjusted for the multivariate regression. We also included the monthly income of the family, the type of construction of the house and house ownership as proxy indicators for capturing the socioeconomic status of the participants. The data for joint vs. nuclear family was also taken as it was our hypothesis that children living in joint families receive more stimulation as compared to those living solely with the parents. We also adjusted for stunting and immunization coverage as indicators of a child’s medical health.

Table 2 shows that 94.9% and 95.6% of the children who were breastfed for more than 12 months had age appropriate cognitive and language development as compared to 86.4% and 88.6% of children breastfed less than 6 months respectively ( p-value<0.05) (Table 2).

Table 2: Descriptive statistics of children according to the duration of breastfeeding.

The results of the current study indicate that increasing the duration of breastfeeding (>12 months) during infancy was significantly associated with improvement in the cognitive and language development of children even after adjusting for a range of child and socio-economic and socio-environmental factors (aOR=2.42, aOR=2.44 respectively). The biologic plausibility for this association lies in the hypothesis that the breast milk has long chain polyunsaturated fatty acids (PUFAs) which are not present in the cow’s milk. These bio-active compounds are found in high concentrations in the brain and the retina. It is thought that these compounds have a beneficial effect on the visual and neuro-cognitive development during the early years of neuro-maturation thus leading to significantly improved cognitive and language development in infants [9].

Similar findings have been reported by other studies that the language and cognitive outcomes are better in breastfed children as compared to bottle fed children. Also, increasing the dose (duration) of breastfeeding leads to protection against delays in children’s language development [10,11].

Immunization played an important role in the language development of children under 3 years of age. Children who were completely immunized were 2.91 times more likely to achieve age appropriate language development as compared to non-immunized children (p=0.006). A possible explanation for this association could be that non-immunized children suffer more from childhood diseases. During episodes of disease, the child is lethargic and less susceptible to human stimulation, thus losing the time for further development. Chronic diseases also result in stunting which is a proven risk factor for developmental delays in children [12].

Limited data is available in the context of Pakistan regarding the association between breastfeeding and language and cognitive development of children. 94% of children of Pakistan are reported to have been breastfed at some-time [13]. A major strength of our study was to reveal this association. We also utilized HOME, which is a validated tool for measuring the effect of the home environment on the child. We would further argue that robust techniques of analysis were applied and a wide range of co-variates were adjusted. An obvious limitation of our study is that we did not have data regarding the maternal IQ to be adjusted in our analysis. Some studies suggest that the difference in IQ of children is solely based on maternal IQ and when that is adjusted the difference vanishes [3]. Some studies take maternal education as a proxy indicator for maternal IQ, but we did not think that to be appropriate [14]. We also could not account for several other factors which play an important role in the development of children. Lastly, we cannot exclude the possibility of recall bias affecting the data regarding the duration of breastfeeding. Eaton et al. [15] found out that for children under 3 years of age, 79% of the mothers were able to accurately recall the duration of breastfeeding within a month and 95% to within 2 months.

Based on our findings, we recommend that breastfeeding should be promoted for greater than 12 months. It leads to improved child’s language and cognitive development and also helps to build a bond between the mother and the child. However, we need more robust studies, including trials to establish the causal association between the duration of breastfeeding and a child’s language and cognitive development.

Availability of data and material: The datasets analyzed for this paper are available from the corresponding author on reasonable request.

Funding: “Balochistan-Early Childhood Development Project” was led by Aga Khan Foundation, Pakistan (AKF, P) and funded by AusAID. This agency was involved in setting up the Family Resource Centres, FRCs in the districts of Balochistan.

“Balochistan-Early Childhood Development Project” was led by Aga Khan Foundation, Pakistan (AKF,P) and funded by AusAID. It was planned in consultation with two technical partners; Institute for Education Development (IED) and Human Development Programme (HDP) of Aga Khan University and three implementing partners (Rural Community Development Council, Taraqee Foundation, Institute for Development Studies and Practices) and the Government of Balochistan. In addition to the funders and the project team, we would also like to thank the families and the children who participated in the study and provided data for this paper.