The Experimental Evidence for the Dark Matter Universe

Copyright: © 2016 Sergey GB. This is an open-access article distributed under the terms of the Creative Commons Attribution License, which permits unrestricted use, distribution, and reproduction in any medium, provided the original author and source are credited.

Currently, in the scientific literature there is the statement that 96% of the total amount of the matter in the universe is the so-called the dark matter. It is uniformly fills the entire universe and it cannot be identified with the any observable celestial bodies. It was called the dark matter because it is invisible. No one has not seen in order to it was involved in the gravitational interactions between stars and star clusters. Its existence the astrophysics explains by causes of the background radiation of radio waves. This radiation is detected by radio telescopes at wavelengths of about 7.35 cm. Actually, it is unknown nothing in addition. The share of the baryonic matter is not more than 4% of all matter in the universe (baryonic matter mainly consists of the heavy elementary particles, neutrons and protons). In connection with this in the science the assumption gaining strength, that in the universe there are two kinds of a matter. One of them is the ordinary baryonic matter, and the other, the so-called a dark matter. It is by primary kinds of a matter. There is the evidences and the objections to such a view of nature. To add the arguments in favor of evidence to the existence of a dark matter in the space between the baryon bodies, in this article we re-look at the experience of PA Cherenkov 1934 about the luminescence of very fast electrons due to D-rays of the radioactive elements as they pass through the liquid. In 1958, to Cherenkov, together with Tamm and Frank was awarded the Nobel Prize in Physics "for the discovery and interpretation of the Cherenkov effect."

The Astrophysics about a Dark matter

The history of the existence of dark matter is such. The American astrophysicists A. Penzias and R. Vilson had found in the horn receiving antenna of a radio telescope the weak nonvanishing background of the extraterrestrial origin. It had not dependent on the orientation of the antenna. This a radiation is called the relic. After its opening in 1968 to Penziasu Vilsonu and were awarded the Nobel Prize in Physics [1].

Later it was conducted systematic studies of the CMB at the different wavelengths of up to half a millimeter. The results yielded the dependence of the radiation energy from the wavelengths (Figure 1).

It turned out that this dependence corresponds to the blackbody radiation with a very low temperature 2,75°K, close to the absolute zero. As can be seen from Figure 1, in the left part lies to the CMB spectrum of electromagnetic waves, and in the right part there is the radiation of the stars, including the Sun (5,10-8 m). The cosmic microwave background spectrum is allocated to a relatively high intensity at its maximum.

Today, the cosmology tries to link the CMB with the concentration of the photons had been emitted at an early stage of the universe after the "big bang". However, it was found that the average weight of these photons per unit volume several hundred times less than the average density of baryonic matter=10-27 kg/m3. Moreover, the average density of a baryonic matter is the same for the entire observable Universe. This means that the distribution of a matter in the universe is homogeneous on the average on a large scale, and the Universe is homogeneous.

Thus, it appears that the CMB indicates only about the presence of dark matter, but it is not a dark matter. Indeed, as noted in, shortly after discovery of the CMB Soviet astronomer Shklovsky and American scientists Dzh.V.Fild and Dzh.L. Hichkok had noted the following fact. Back in the early 40s of the 20th century according to the observations of the spectra of interstellar they found that the molecules that make up the interstellar gas (cyanogen radicals CN), are in an excited state. The energy of this excitation corresponds to a temperature of about 3°. Thus, it turned out to be that the interstellar molecules is by a thermometer, which was showing temperature of the CMB to astronomers.

In summary, we note that the observational astronomy showed the presence in the space a uniform distribution of dark matter. About it nothing else is known, except that it there is all over and reacts with the molecules of the interstellar gas, manifesting itself by blackbody radiation, corresponding to a temperature Ð¢=2,75°Ðš. While there is no the experimental evidence, that a dark matter is being subjected to the action of a gravity.

In 1934 year PA Cherenkov first observed glow extremely fast electrons, which was caused by rays of radioactive elements as they pass through the liquid. This observation had destroyed the concepts of physicists that only fast-moving an electron emits light. It became clear that this conclusion is valid until the speed of the moving electron V is less than the phase velocity of light. The phase velocity of light in the transparent material is C/n. Where n - the refraction index of substance. For the most transparent materials it is more than unity. Therefore, the electron velocity may to exceed the phase velocity and become a "super-light".

A special feature of this light is that it is distributed within a cone with half-angle V, and defined by the ratio

The flux is observed only in the direction in which the electron moves. In the opposite direction the light is not emitted. In the analysis of this phenomenon, the focus of physicists, apparently, was focused on the fact "superluminal" motion of the electron. This is understandable, since the appearance of “superluminal" velocity refuted the basic postulate of the theory relativity that the speed of light is limit of the speed of baryon bodies in nature. It reassured by all scientists due to the fact, that this speed exceeded the phase velocity of light, rather than the speed of light in vacuum.

So, today physics, as in many other cases, only stated a fact light emission by an electron moving not accelerated but evenly. But the question left unanswered of why there is this glow. Why this a glow there is only against the motion of the electron and only within a cone of angle v?

The Shock Waves in a Gaseous Dark Matter

It should be noted that the scientific director of the work Cherenkova the academician Vavilov already at that time expressed the assumption that the observed radiation is associated with the interaction of electrons with atoms of optical medium. Future Nobel laureates and Frank believed that the optical medium represents a potential electric field. It is an inactive nuclei (physical points), perturbed by a rapidly varying field of the electrons. Yet there was no idea of dark matter that fills the entire space.

We expect that a dark matter is a gas in ours further the studies. Therefore, it is possible for to attract of the further research the scientific potential of gas dynamics. Therefore, in the future, along with the term "dark matter" we will use the term "gaseous dark matter" and "dark gas". On this basis, we will gradually build up and expand the evidence base for the correctness of the chosen areas of the research.

Figure 1 shows the image of the ball as it moves through the air at supersonic speed. A detached shock wave is showed. The angle of inclination of the surface of the shock wave to the direction of flight quickly decreases from 90° in front of the ball up to a certain value β far away from the ball.

With regard to gaseous dark matter, this ratio takes the form

where Ca/n - the phase velocity of propagation of weak perturbations; V - a velocity of the electron.

According to wave theory Huygens' the light rays are a family of straight lines normal to the wave front. Such a wave front in case of the "superluminal" motion of the electron is a shock wave that bounds the domain of perturbations, caused by an electron. Therefore, the halfangle of the cone, inside of which is distributed the glow of Cherenkov, is the angle between the direction of motion of the electron and the directions of the two families of the straight lines, normal to the shock waves (Figure 1).

Analyzing the glow Cherenkov, we may to note that at small sizes of the electron and a high speed of its movement was impossible to discern the structure of the bow shock wave in the vicinity of the surface of a flying electron. Therefore, in the experiment was recorded only feature associated with the spectrum of flow far enough from the electron, where the angle of the shock wave β is close to the

corner of perturbation μ. On this basis, it is possible to determine the relationship between the angles ϑ and β as follows

Equation (1) is confirmed in practice well. Consequently, the ratio of (4) also will have been provided a real value for variables member, characterizing a gaseous dark matter. For example, for an electron moving in benzene v=38,5° (n=1,501). This allows you to define a very important characteristic of dark matter - velocity of propagation of small perturbations in a gas.

It is important to emphasize that in the experience of the Cerenkov a glow was seen only in the direction of motion of the electron but it was absent in the opposite direction This indicates that the glow in the experiment of Cherenkov was generated by a shock wave in front of the electron rather than the spread of small perturbations in the dark gas. Otherwise, in the experience of the Cerenkov glow should have been observed also after a flying electrons, since nothing prevents such a proliferation of small perturbations in the gas media. 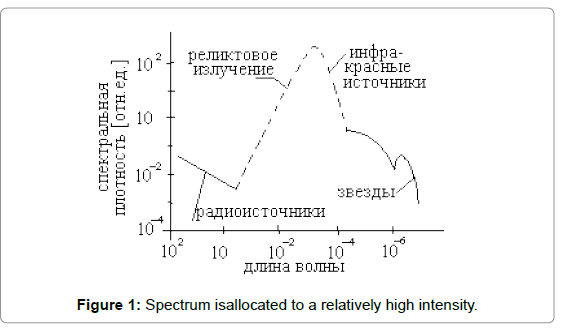