Department of Cell Biology and Genetics, University of Lagos, Nigeria

Copyright: © 2015 Minari JB, et al. This is an open-access article distributed under the terms of the Creative Commons Attribution License, which permits unrestricted use, distribution, and reproduction in any medium, provided the original author and source are credited.

The frequency of ABO blood group was carried out among male inmates in a typical Nigerian prison. This study sought to correlate blood grouping with crime to determine whether a relationship could be established. The results obtained will serve as a platform for instituting awareness to relevant authorities and the public at large. The experiment was carried out at the hospital premises of the Kirikiri medium prison Apapa Lagos Nigeria. A total of 501 male inmates voluntarily provided themselves for this study. Blood was taken by piercing the thumb with a lancet and dropped on the card. The ABO and rhesus blood grouping was determined using felines card method with commercially prepared antisera. The frequency of each blood type was calculated. Among the male inmates charged for various crimes, blood group O+ has the most occurrences, having the highest blood group frequency for stealing, fighting, robbery and rape. Blood group A+ followed, having the highest frequency for inmates charged for fraud and murder. Blood group B+ has the least occurrence, having similar frequency with blood group A for inmates charged for Murder. This study indicates that Blood group O+ had the highest frequency for inmates convicted for the various crimes. Blood type AB+ and AB- had the least frequency. The results obtained were compared with previously published data. Some variations in frequencies were observed. The frequency of ABO and Rhesus blood groups appeared to be stable and consistent with reports from previous studies in Nigeria.

Blood is a bodily fluid in animals that delivers necessary substances such as nutrients and oxygen to the cells and transports metabolic waste products away from those same cells. In vertebrates, it is composed of blood cells suspended in blood plasma. Plasma, which constitutes 55% of blood fluid, is mostly water (92% by volume), and contains dissipated proteins, glucose, mineral ions, hormones, carbon dioxide (plasma being the main medium for excretory product transportation), and blood cells [1]. Blood can be classified into different groups based on the presence or absence of inherited antigenic substances on the surface of red blood cells (RBCs). Blood types are inherited and represent contributions from both parents. Forensics use a system called the ‘ABO System’, which is a system that measures antigens; antigens within the body determine blood type and are normally categorised as either A or B. Also within the blood typing system there are Rhesus antigens, which can be categorised as Type D; should an individual’s red blood cells have these Rhesus antigens, they are classified as Rh Positive and likewise if they do not appear they are classified as Rh negative [2].

At a crime scene where there has been blood spilled - either that of the victim or that of the assailant - and indeed in some instances that of both parties; a serologist will take blood samples in order to identify who’s blood belongs to whom. Blood and other body fluid collected from victim and also from criminal has important role in the identification and investigation of criminal cases. Forensics uses Blood samples for the identification of criminals. Though information is lacking in this area of research, the need therefore arises to find the relationship between blood group and crime. If we have availability of this information beforehand it will aid criminal investigations especially in the identification of individuals there by solving the challenges in identifying these criminals. This study therefore sought to correlate blood grouping with crime to determine whether a relationship could be established.

Blood group and RH determination: The ABO and rhesus blood grouping was determined using felines card method. (2005) Drops of antigens for A, B, AB and O blood groups were placed separately using, pipette, on a tile with one row of four columns each marked A, B, AB and O respectively. A drop of the subject’s blood was placed on the anti sera on each column. The cell and serum in each circle were then mixed with a stirrer, and the files were rocked for a while. After one minute, the mixture was examined for agglutination. Agglutination in a particular mixture indicated the ABO blood group. When there was no agglutination in the anti A and B mixture, the sample was O. In the case of anti D column, agglutination means the donor is Rhesus positive while absence of agglutination signifies Rhesus negative.

Some of the limitations encountered during the course of the study are due to the fact that: some of the inmates are illiterate and only understood their native languages, so it was difficult to communicate with them because of language barrier. Secondly, Religious Belief and Trust and thirdly, Fear of unknown. All these factors pose as a barrier which made some of them to be reluctant in participating in the experiment. 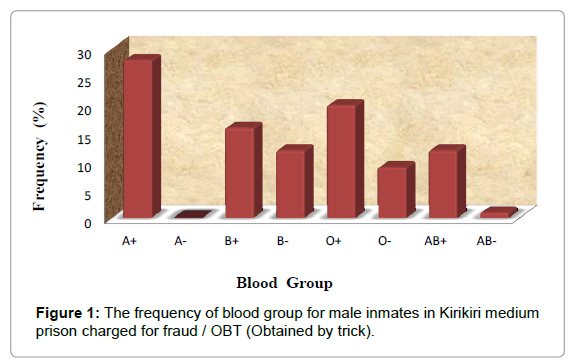 Figure 1: The frequency of blood group for male inmates in Kirikiri medium prison charged for fraud / OBT (Obtained by trick).

For inmates who were imprisoned for stealing as seen in Figure 2, blood group O+ was the most prominent group, occurring with 35% followed by blood group B+ occurring in 25% then blood group A+ with 22%. Blood group AB+ was occurring least in the sample population with 6%. 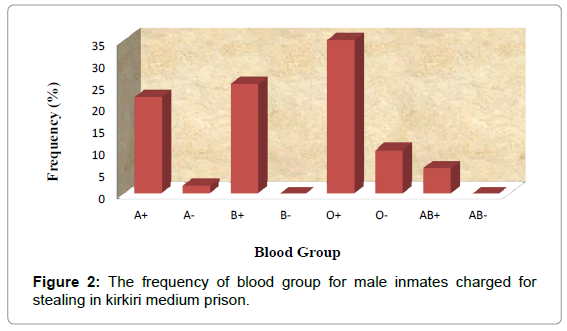 Figure 2: The frequency of blood group for male inmates charged for stealing in kirkiri medium prison. 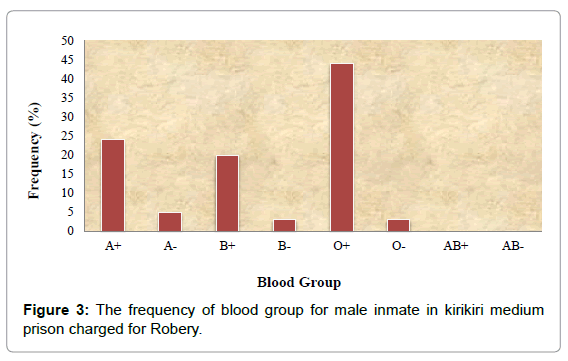 Figure 3: The frequency of blood group for male inmate in kirikiri medium prison charged for Robery.

Blood group O+ was higher with 37% for inmates imprisoned for fighting when compared with other blood groups as seen in Figure 4. Blood group A+, B+, and AB+ gave the following result respectively, 32%, 16% and 5%. 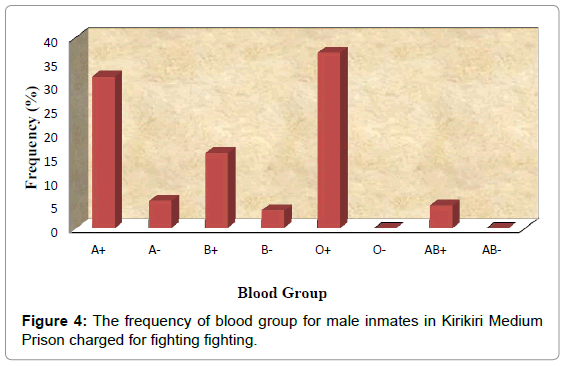 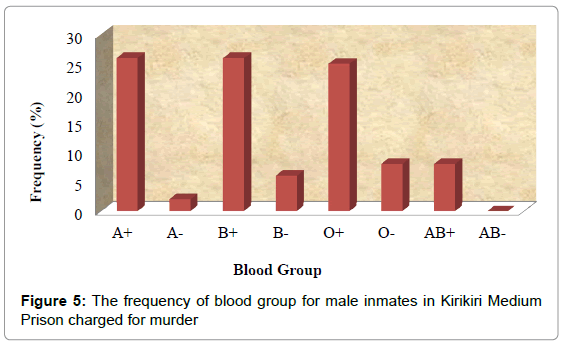 Figure 5: The frequency of blood group for male inmates in Kirikiri Medium Prison charged for murder 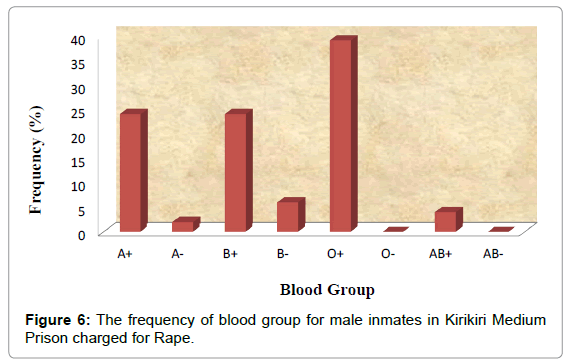 Figure 6: The frequency of blood group for male inmates in Kirikiri Medium Prison charged for Rape.

Over the past three-quarters of a century, information from studies on blood groups has been applied to medico-legal application. The use of blood group substances in medico-legal examination is based on the fact that once a blood group is established in an individual; it remains unchanged throughout his life [3]. Though there are limited studies relating blood group to crime but lots of research has been carried out on blood group frequency among different populations. There are also myths correlating blood group and personality among the Asians. The desire to know about blood type, started because of an assertion from the West, which stated that Asians were lower, in the evolutionary chain and that they were more closely related, to animals than other races.” Interestingly, that was the start point where Asian countries became deep into the study of blood type. They opined that personality can influence one’s behaviour. However there is no scientific evidence to back this up [4].

This study also revealed that Blood group O+ is more prominent among male inmate charged for stealing and robbery (35%, 44%) when compared with blood group AB(6%, 0%)that has the least frequency. This result is in agreement with other studies carried out in Nigeria which also reported blood group O as the most prevalent blood group. Oluwadare and Shonekan reported Group O prevalence of 55% and AB of 3.9% [7]. Similar result was also reported by Adeyemo and Soboyejo (2006) noted blood group O as 55% and AB 2.7% [8]. This may also be due to the high prevalence of blood type O in the country.

During this study it was also observed among male inmates charged for murder that blood group A and B are the most prominent with 26% each. Blood group O+ is slightly lower than blood group A and B+ which has 25%. The result from this study indicates that the tendency to commit murder cut across the blood group A, B, and O. This result is consistent with the result obtained by Khan et al., for a study conducted on population of Rawalpindi and Islamabad in 2006, in which the most prevalent blood group was B (33.3%) , followed by, O (31.1%) and A (25.53%) and AB (10.04%) [8]. Blood group AB+ has the least frequency compared to the other blood groups [9]. This may be due to the fact that they are the least populous among the various blood groups.

Among male inmates imprisoned for fighting and rape, blood group O+ was the most prevalent group (37%, 39%), followed by blood group A and B, (32%, 16%) . This result might be as a result of the high prevalence of blood group O and A among males in Nigeria. This result is in agreement with the result obtained by Bassey and Imabong 2006 [10]. His study showed O factor had the greatest number of individuals (44.34%), followed by A (28.77%) then B (22.64%) and AB (4.25%) For those imprisoned for rape blood group A and B has the same value (24%). Roshi2009 also observed similar personality trait. He inferred that individuals with type O blood are Arrogant, vain, insensitive and ruthless. Blood group AB+ has a lower frequency when compared to the other blood groups. Personalities studies has also revealed that AB’s blood group are known to be cool, controlled, rational, introverted and empathic as observed by Kathy 2007 [4].