Copyright: © 2017 Zaghloul H, et al. This is an open-access article distributed under the terms of the Creative Commons Attribution License, which permits unrestricted use, distribution, and reproduction in any medium, provided the original author and source are credited.

Conclusion: The baseline inflammatory prognosticators revealed substantial link to various prognostic clinicpathological parameters in the context of rectal cancer patients who had undergone neoadjuvant chemo-radiation. Moreover, both NLR and dNLR can be seen as possible independent indicators for prognosis in the given patient group.

Colorectal cancer (CRC) is the third leading cause of cancerrelated death in the world [1]. Rectal cancers comprise about one third of surgical resections for colorectal cancer. [2] The standard of care for patients with margin-threatening rectal cancer is preoperative neoadjuvant radiotherapy with or without chemotherapy. This approach significantly increases disease-free survival (DFS) and sphincter preservation rates and improves circumferential resection margins and reduces local recurrence rates [3-6]. The classical TNM staging system which focuses on tumor, nodes, distal metastasis has been commonly considered as “gold standard” for guiding therapy and estimating the outcomes in patients with CRC [7]. However, these systems are limited for predicting the prognosis precisely and guiding the clinical practice appropriately, because many patients with the same stage turned out to have significantly heterogeneous prognosis [8,9]. Therefore, there is a need to identify biomarkers of response because treatment is associated with significant morbidity, as not all patients respond to neoadjuvant chemoradiation (nCRT). Recently, the systemic inflammation biomarkers were found to provide insight into prognosis of solid tumors [10,11]. Several indicators derived from the peripheral blood such as the neutrophil to lymphocyte ratio (NLR), derived neutrophil to lymphocyte ratio (dNLR), platelet to lymphocyte ratio (PLR) and lymphocyte to monocyte ratio (LMR) have been widely investigated as useful prognostic indicators in various kinds of cancers including gastric cancer, colorectal cancer, hepatocellular carcinoma, non-small cell lung cancer, breast cancer and pancreatic cancer. [12,13] An elevated NLR has been found to be an indicator of poor prognosis in patients with CRC [14]. On the other hand, PLR role as prognostic indicator was found to be inconsistent as it was associated with decreased survival in some studies [15,16], whereas others did not demonstrate the relationship between prognosis and PLR [17,18]. However, only one or two inflammatory biomarkers have been evaluated for the prognosis of patients with rectal cancer according to previous reports [19-21]. Moreover, the optimal cut-off values of the biomarkers from these studies were still inconsistent. Consequently, further study on the prognostic values of these biomarkers in patients with rectal cancer is necessary. This study aimed to evaluate the prognostic potential of NLR, dNLR, PLR and LMR biomarkers in predicting the outcome of rectal cancer patients undergoing neoadjuvant chemoradiation prior to surgical resection.

Assessment of response to nCRT

Radiologic response to therapy was assessed using RECIST criteria 1.1 and was defined as both primary tumor and lymph nodes downstaging based on comparing pre- and post-neoadjuvant treatment MRI [22]. Total mesorectal excision (TME) was performed in all patients, however extent of surgery whether low anterior or abdominoperineal resection was based on the initial tumor location. Surgery were performed 4-6 weeks after completion of neoadjuvant CRT. Adjuvant CTx started 4 weeks after surgery.

3-Only patients with R0 resection were included. R0 resection was defined as removal of all gross tumor and histopathologic examination of proximal, distal, and circumferential margins that revealed the absence of malignant cells more than 2 mm from the edge.

1. Patients who develop evidence of distant metastasis during induction phase were not eligible for surgical resection.

3. After operation, each patient was followed up regularly until December 2016 or until death (every 3 months for the first 2 years and then every 6 months up to 5th year). Physical examination, endoscopy, laboratory tests and imaging were conducted at every visit. The followup periods varied from 3 months to 50 months, with a median of 25 months. Overall survival (OS) was calculated from diagnosis to death. For drop-out patients, the date of the last follow-up was applied. Disease-free survival (DFS) was calculated from surgery to disease relapse or until the date of last follow-up.

The impact of different clinical parameters on Baseline response inflammatory biomarkers (NLR, dNLR, LMR and PLR) were evaluated by Mann-Whitney U test (between 2 groups) or Kruskal-Wallis test (≥3 groups). Receiver operator characteristic (ROC) curves were used to identify potential Baseline response inflammatory biomarkers cut-offs values in rectal cancer patients treated with neoadjuvant concurrent chemoradiation prior to surgical resection. An area under the curve of 1.0 would indicate a perfect test, whereas 0.5 would represent a non-informative test. Kaplan-Meier method was accessed for survival analysis.

This study included 90 rectal cancer patients who received neoadjuvant chemoradiation. The final analysis included 80 patient who had total mesorectal excision with R0 resection after neoadjuvant chemoradiation with 54 (67.5%) male and 26 (32.5%) female, patients aged from 38 to 69 (the median age was 52 years). With regards to histological type, the number of moderately, poorly differentiated, mucinous and signet ring cell carcinoma were 56 (70%), 5 (6.3%), 7 (8.8%) and 6 (7.5%) respectively. Based on the seventh edition of the TNM-UICC/AJCC classification, the number of baseline clinical stage IIA, IIB, III (Any T N1, N2) were 8 (10%), 10 (12.5%) and 62 (77.5%) respectively. Additionally, the median values of baseline NLR, dNLR, LMR and PLR were 3.8, 3, 4.2 and 156 respectively. All patients baseline characteristics are presented in Table 1.

The optimal thresholds for NLR, dNLR, PLR and LMR

The receiver operating characteristic (ROC) curve, used DFS as the end-point for NLR, dNLR, PLR and LMR (Figure 1). The receiver operating curve (ROC) demonstrated a baseline NLR of 3 cut off value (area under the curve: 0.778) for predicting DFS with a sensitivity 78.7% and septicity of 85.3%. Additionally, the dNLR cut off 2.1 (area under the curve: 0.740) yielded a sensitivity of 77.3% and specificity of 84.3% in predicting the DFS. Moreover, the ROC curve illustrated the ability of baseline LMR and PLR to predict DFS (area under the curve were 0.612 and 0.545 and the best cut-off value were 4.9, 169 respectively). The base line LMR 4.9 cutoff value yielded a sensitivity of 68.7% and specificity of 76.5% in predicting DFS respectively. Moreover, PLR 169 cut off value resulted in the lowest sensitivity of 60.1% and septicity 68.3% in predicting DFS. Patients were subsequently divided into two groups according to the optimal cut-off levels, with the high group ≥ the optimal cut-off levels and the low group that < the optimal cutoff levels. Our results revealed that NLR, dNLR, PLR and LMR were significantly associated with tumor stage, depth of invasion, lymph node, histological types and tumor grade respectively. On the contrary, NLR, dNLR, PLR and LMR were not associated with the age or sex of patients. Those patients with tumor stage III (Any T N1, N2) depth of invasion T3-T4, and lymph node N1-N2 had a higher NLR, dNLR, LMR and PLR than those with tumor stage II, depth of invasion T1-T2, and lymph node N0 (Table 2). 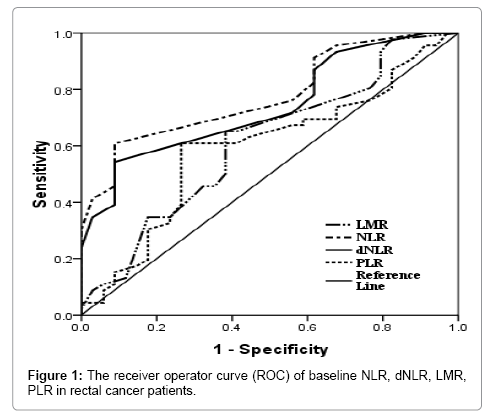 The association between baseline characteristics and clinical prognosis 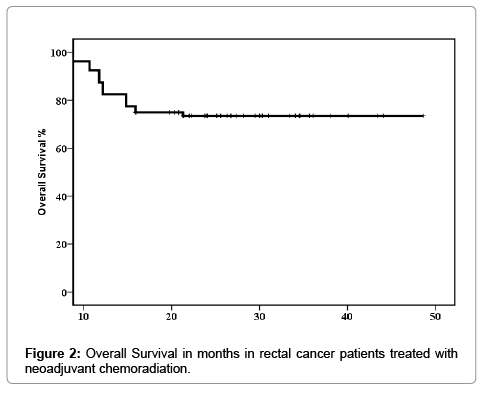 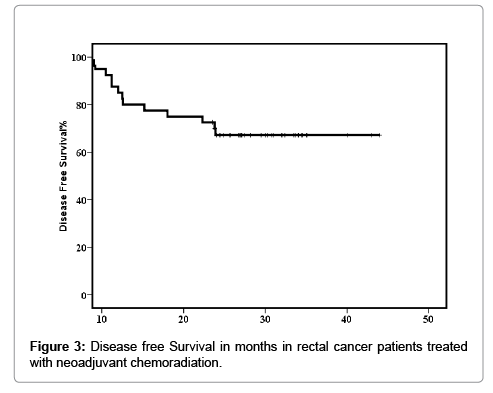 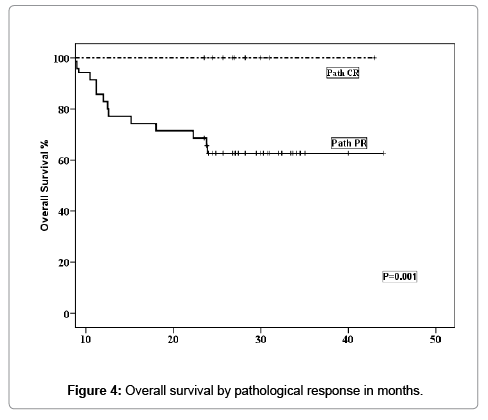 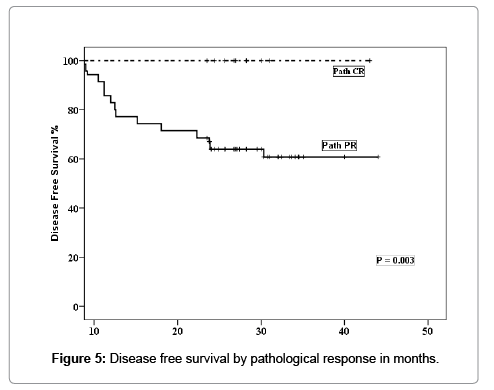 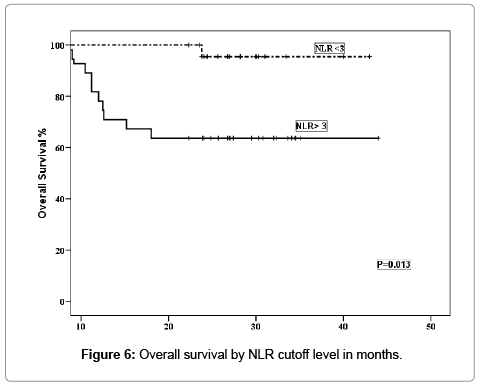 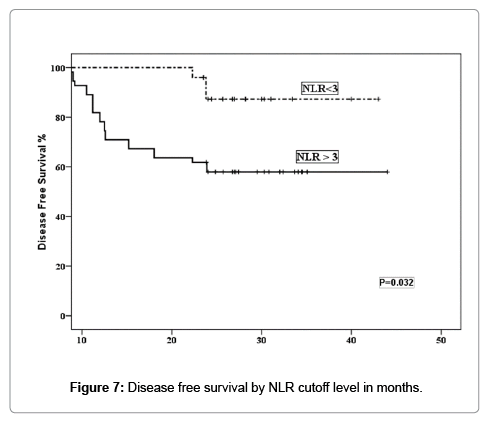 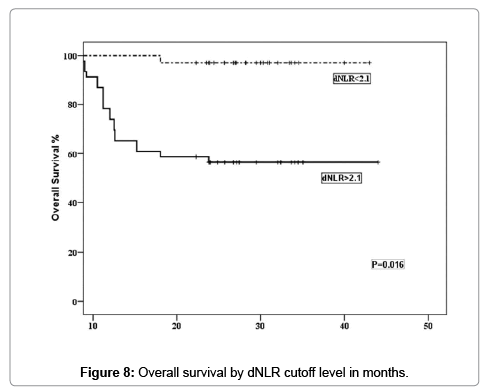 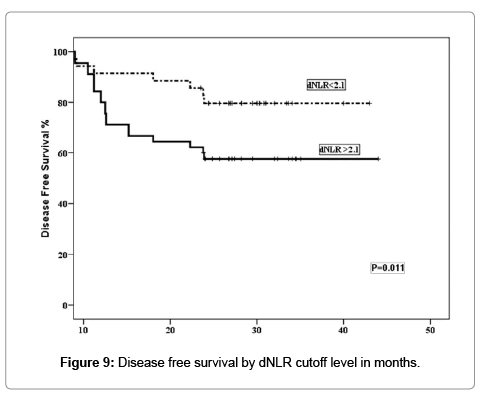 Over the past decades, more understanding of the links between inflammatory microenvironment and cancer has emerged and contributed significantly to the prognosis of many tumors. A series of inflammatory cells and innate immune system signaling molecules are involved in tumor progression [23], such as neutrophil, lymphocyte, platelet and monocyte. Thus, NLR, d-NLR, PLR and LMR that represent systematic inflammatory response are potential prognostic factors for CRC. [24] Consequently, our study aimed to evaluate the prognostic potential of NLR, dNLR, PLR and LMR biomarkers in predicting the outcome of rectal cancer patients undergoing neoadjuvant chemoradiation prior to surgical resection. The (ROC) demonstrated the ability of a baseline NLR, dNLR, LMR and PLR to predict DFS in this group of rectal cancer patients with area under the curve (AUC) of 0.778, 0.740, 0.612 and 0.545 respectively. Similarly, Ying et al reported that preoperative NLR, d-NLR, PLR could be considered as potential biomarkers for colorectal cancer patients with ROC area under the curve (AUC) of 0.764, 0.672, 0.727 respectively. However, they could not use LMR for subsequent analysis for its low AUC of 0.234 [25]. A possible reason for such difference in the prognostic potential of baseline LMR between our study and Ying et al might be related to the studied population as we focused only rectal cancer patients while they included both colon and rectal cancer patients. Moreover, our results demonstrated that patients with tumor stage III (Any T N1, N2) depth of invasion T3-T4, and lymph node N1-N2 had a higher NLR, dNLR, LMR and PLR than those with tumor stage II, depth of invasion T1- T2, and lymph node N0. Ying et al reported comparable association between advanced stage disease, T3-T4 depth of invasion, advanced nodal disease and elevated baseline biomarkers NLR, dNLR, LMR and PLR [25].

To the best of our knowledge, this retrospective study represents the first series that succeeded to find out cut off values of baseline biomarkers NLR, dNLR, LMR and PLR for rectal cancer patient receiving neoadjuvant chemoradiation prior to surgical resection. More importantly, our study demonstrated that baseline inflammatory response biomarkers NLR (P=0.001, d NLR (P=0.002), LMR (P=0.001) and PLR(P=0.003) were significantly associated with path CR and any pathologic response.

It is worth mentioning that our results indicated that age of patients (≥50 years), depth of invasion ≥T3, lymph node N1-N2, stage III, grade ≥3 tumors, and partial response to preoperative chemoradiation, NLR (≥3), dNLR (≥2.1), PLR (≥169), LMR (≥ 4.9) were significantly associated with decreased OS, and DFS. However, multiple regression analysis revealed that higher baseline NLR, dNLR along with advanced TNM stage at diagnosis and partial response following neoadjuvant chemoradiation were independently correlated with poor OS and DFS. Correspondingly, Ying et al. reported that in multivariate analysis, elevated NLR, high tumor grade and stage showed a significant association with OS, CSS and DFS [25]. Our findings are consistent with previous studies on the relationship of NLR and prognosis of many other cancers, such as breast cancer, pancreatic cancer, hepatocellular carcinoma [26-28], especially CRC [29,30].

The above results were supported by several mechanisms of inflammatory reaction to tumor. Basically, neutrophils interacted with distinct cell populations and produced a wide number of cytokines and effector molecules, such as circulating vascular endothelial growth factor (VEGF). VEGF stimulated tumor angiogenesis, growth and metastasis [31]. VEGF-A and VEGF-C were observed significantly higher expression in CRC tissue in comparison with normal tissues [29], and reduced expression of VEGF and VEGFR contributes to markedly inhibited CRC tumor neovascularization in vivo and in vitro [32,33].

The current study has several strengths

First: It is considered to be the first study to confirm the impact of different clinicopathological prognostic indicators including baseline inflammatory response biomarkers (NLR, dNLR, PLR, and LMR) on the outcome of rectal cancer patients treated with preoperative concurrent chemoradiation.

Second: There was homogeneity in the treatment used as all patients received neoadjuvant concurrent chemoradiation prior to surgical resection, which obviated the possible negative impact of different treatment modalities on clinical prognosis.

There are limitations to the current study

Firstly, the study was a retrospective design, with a small population size of 80 patients.

Secondly, the peripheral blood findings were not compared to the findings of peritumoral inflammation in the primary tumor tissue. Consequently, further studies are needed to illuminate the relationship between inflammatory biomarkers and prognosis in patients with rectal cancer treated with preoperative concurrent chemoradiation.

All authors confirm that they did not receive any funds nor financial support from the institutes they are affiliated to nor any other companies. Moreover, all authors affirm that they have no conflicts of interest concerning this study.