The Role of Histone Deacetylase (HDAC) as a Biomarker in Cancer

Copyright: ©2015 Moradzadeh M, et al. This is an open-access article distributed under the terms of the Creative Commons Attribution License, which permits unrestricted use, distribution, and reproduction in any medium, provided the original author and source are credited

Histone acetylases [HAT] and histone deacetylases [HDACs] are responsible for the addition and removal of acetyl-groups to or from specific lysine residues located within histone tails and a number of non-histone proteins. HDACs, as one of the epigenetic mechanisms, play a central role in the regulation of cellular properties that related to development and progression of cancer. Recently, researches began to focus on the expression patterns of HDAC isoforms as a biomarker in cancer. It could be used to find new agents that are very effective in inducing apoptosis, differentiation, and/or cell growth arrest in neoplasia. Approximately, all of studies showed HDAC expression level differ in human tumors. For example, in most tumor entities class I HDAC expression was higher in late stage, high-grade tumors with strong proliferative activity and Class II HDACs down regulated in human tumors and high expression in some tumors was linked to a better prognosis. Thus, this factor allowed to opens new possibilities for a molecularly targeted approach to treatment.

Nowadays, Histone acetylation, as one of the epigenetic mechanisms, is considered in the development of human cancer [1,2]. Histone acetylases [HAT] and histone deacetylases [HDACs] are responsible for the addition and removal of acetyl-groups to or from specific lysine residues located within histone tails and a number of non-histone proteins (Table 1) [3,4]. A disequilibrium of the HDACs leads to transcriptional repression in genes responsible for regulation of proliferation, migration, angiogenesis, differentiation, invasion, and metastasis [5-7]. Overall, HDACs is might be as a good biomarker in cancer diagnosis.

Recently, researchers focused on the expression of HDAC isoforms in human tumors and, the most important findings on this topic are presented here.

HDACs remove the acetyl moieties from the ε-amino groups of lysine residues present within the N-terminal extension of the nucleosomal histones, and in turn lead to a more condensed form of chromatin, the so-called heterochromatin, and gene silencing. On the other hand, histone acetyl transferases [HATs] with cofactor acetyl- CoA, lead to a more open form of chromatin, the so-called euchromatin (Figure 1) [8-11]. 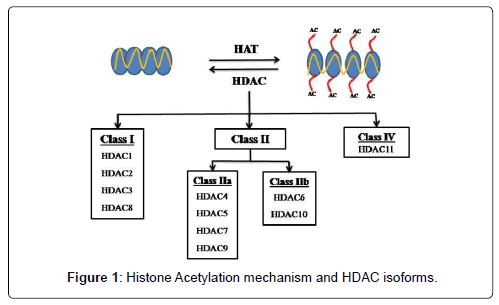 At present, there are 18 HDAC isoforms into four classes that summarized in Figure 1 [12,13]. The Class I HDACs [HDAC 1, 2, 3 and 8], which are generally nuclear, ubiquitously expressed in various human tissues, and may be more significant in regulating proliferation [14]. HDAC2 has been shown to suppress apoptosis in tumor cells [15-18].

Class II HDACs [HDAC 4, 5, 6, 7, 9, and 10], which are selectively distributed among tissues, share domains with yeast HDAC-1 [19,20]. HDAC4 acts as a repressor of chondrocyte hypertrophy through interacting with the myocyte-specific enhancer factor 2C transcription factor [21-23] and HDAC7 functions in the negative regulation and apoptosis of T-cells reflecting its interaction with the orphan nuclear receptor Nur77 . HDAC6, located in the cytoplasm where it acts as a tubulin deacetylase, may participate in regulating cell viability in response to mis-folded proteins [17]. HDAC6 also has the capacity to bind directly to ubiquitinated proteins through an ubiquitin-binding domain, and target cargo proteins for subsequent processing [18].

The Class III HDACs [Sir 1-7], which are homologues of the yeast protein Sir 2, require the cofactor NAD+ for their deacetylase function, and are not targeted by the currently available HDAC inhibitors [24].

Class IV HDACs [only comprising HDAC-11], which localize in the nucleus, exhibit properties of both Class I and Class II HDACs [21] All the above HDACs are zinc dependent proteases.

Alteration of HDACs has been found in both hematological malignancies and solid tumors for a long time [25]. Genes coding for HDACs have been always found normal in such cancer cells [26], but altered expression and aberrant recruitment of HDACs in tumors have been found. In colon, breast, prostate, thyroid, cervical, and gastric cancers, some HDACs such as HDAC1, HDAC2, HDAC3, HDAC6, and SIR 7 have been found over expressed. Aberrant recruitment of HDACs results from chromosomal translocations has been found to have a causal role in tumorigenesis [27,28].

The most extensively used biomarker in HDAC inhibitor trials to date has been histone acetylation, in particular H3 and H4. Preclinical and clinical studies have shown that there are several advantages of measuring histone acetylation. First, histone acetylation is a direct downstream modification regulated by HDAC, which can be detected within the tumor tissue. Second, histone acetylation can be measured in peripheral blood mononuclear cells [PBMCs], which are often taken as a surrogate tissue for tumors where biopsies are unobtainable without invasive procedures.

The use of the biomarker for hyperacetylation of histones [both in blood lymphocytes and tumor cells] has been useful as a guide to target specificity in early studies of HDAC inhibitors, and this biomarker has been the most extensively developed so far. Changes of this biomarker can be determined via Western blot, flowcytometry analysis or immunohistochemical methods.

There are various studies in cancer and tumor tissue that revealed changes in the acetylation levels and the expression of the HDAC enzymes, which summarized in (Table 2). In hematologic malignancies, the aberrant recruitment of HDACs to promoters plays a causal role in tumorgenesis [29].

1. Histone deacetylases play a central role in the regulation of several cellular mechanisms

2. The majority of studies showed an enhanced expression of class I HDAC isoforms in solid human tumors and was high in locally advanced dedifferentiated, strongly proliferating tumors.

3. In some but not all entities elevated class I HDAC expression was associated with patient prognosis.

4. Expression of class II HDACs has been found reduced in tumors and high expression of these isoforms in some entities predicted better patient outcome.

5. Since all of these data point to a potential biological role of differences in HDAC expression in human tumors, future translational studies will focus on the question, whether HDAC expression patterns are predictive for response to treatment with histone deacetylase inhibitors.