Gastrointestinal stromal tumors are the most common mesenchymal tumors of the gastrointestinal tract. Contrast-enhanced computed tomography is the most commonly used for evaluating response to treatment. Targeted therapies may cause some changes in tumor structure. Reduced lesion vascularity, cavitations, and intratumoral hemorrhage are some changes in patients after imatinib therapy, even without any size reduction. Paradoxically, a transient increase in size may be seen in some cases due to cystic change and intratumoral hemorrhage. Alternative tumor response criteria were developed by Choi et al. in gastrointestinal stromal tumor. They showed that not only the tumor size but also the tumor density are important in evaluating the response. In the present study, we report a 67-year old man who had been diagnosed with the gastrointestinal stromal tumor and treated with imatinib. After 3 months of imatinib treatment, liver lesions reported progression in response assessment.

Gastrointestinal stromal tumor (GIST) is one of the most common soft tissue sarcoma subtypes; each year ~3,300-6,000 new cases are diagnosed [1,2]. GIST is usually seen in middle age and elderly patients., with ~60% located in the stomach, 30% in the small intestine, and 10% in other regions of the gastrointestinal (GI) tract [3]. Size, mitotic rate, and location of the primary lesion are the most important prognostic factors [4]. GIST may be increased in size during treatment because of intratumoral hemorrhage or myxoid degeneration. Decreasing in tumor density on computed tomography (CT) is an important early clinical marker of antitumor activity. Once tumors become hypodense (cystic), the size of the lesions may decrease slowly and eventually stabilize [5,6]. Responses can be observed within 24 h of starting therapy on PET-CT [7].

The 67-year-old male patient was admitted to our hospital to determine the cause of anemia. Heterogeneously enhancing solid mass (11 cm × 17 cm) revealed in the pelvic region and multiple metastatic lesions in the liver were determined on abdominal CT (Figures 1 and 2). 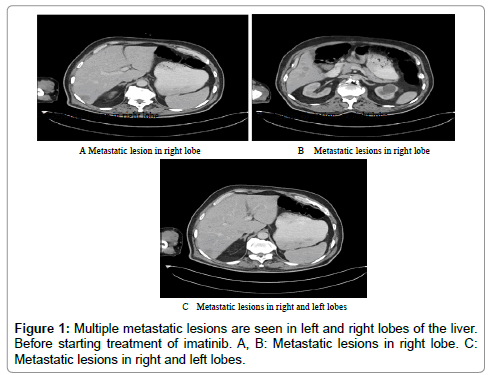 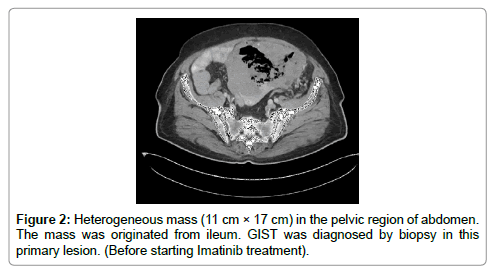 Figure 2: Heterogeneous mass (11 cm × 17 cm) in the pelvic region of abdomen. The mass was originated from ileum. GIST was diagnosed by biopsy in this primary lesion. (Before starting Imatinib treatment).

The mass was originated from the ileum. GIST was diagnosed as a result of the biopsy of the abdominal mass and liver. Imatinib therapy (400 mg/day) was started. After 3 months of imatinib treatment thoracic and abdominal CT scans were taken. The mass in the pelvic area measured 7 cm × 7.5 cm (Figure 3). However, in the liver parenchyma, metastatic lesions were reported as progression by the department of radiology according to RECIST 1.1 criteria (Table 1) (Figure 4). In PET-CT examination there were multiple hypodense lesions in the liver with no FDG uptake (Figure 5). Abdominal CT examination was re-evaluated by Choi criteria (Table 2) (Figures 6-8). And then compared tumor density findings was compatible with the partial response. At this time imatinib therapy (400 mg/day) is still ongoing. There is no disease progression for 10 months. Stable disease is going on. 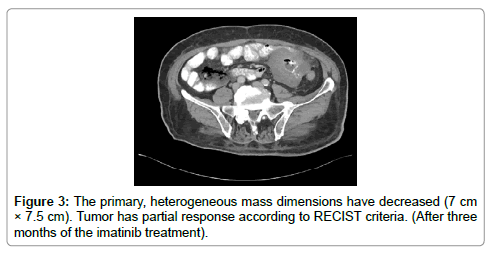 Figure 3: The primary, heterogeneous mass dimensions have decreased (7 cm × 7.5 cm). Tumor has partial response according to RECIST criteria. (After three months of the imatinib treatment). 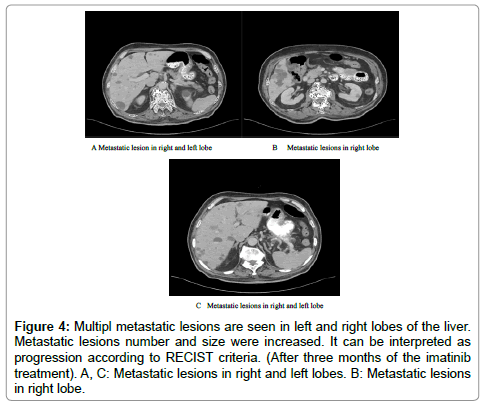 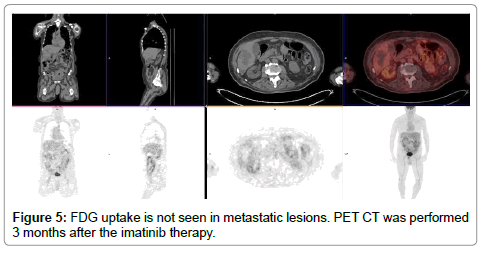 Figure 5: FDG uptake is not seen in metastatic lesions. PET CT was performed 3 months after the imatinib therapy. 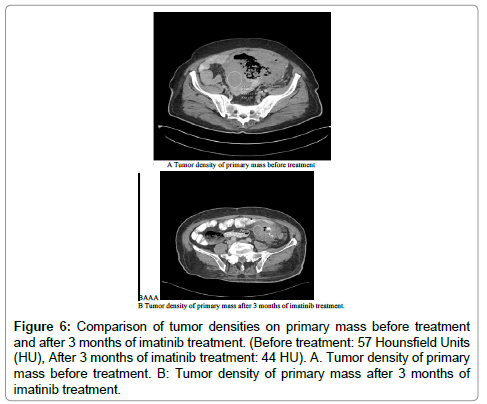 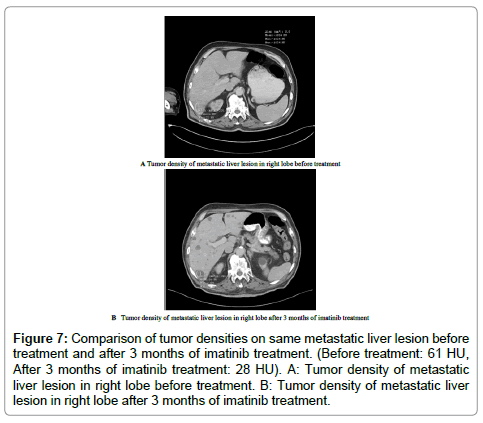 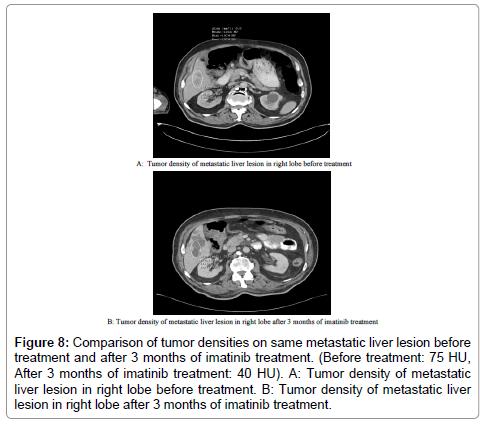 In metastatic GIST; There are differences for evaluating treatment response compared to other solid tumors. For example, late response may occur who have stable disease. A clinical trial performed by Verweij et al. demonstrated that the median time of objective response is four months, a maximal response may be in six months or even longer [8]. In clinical trials performed that PET-CT is able to show an earlier response than CT [9,10]. Treglia et al., demonstrated that PET-CT has a significant value in assessing treatment response in GIST. This modality allows an early evaluation of treatment response and is a strong predictor of clinical outcome [11]. Alternative response assessment criteria (Choi criteria) have been developed. in GIST. Investigators at MD Anderson reported that Choi criteria are a better predictor of response to therapy than standard RECIST criteria. Also, they showed that 10 percent decrease in unidimensional tumor size or a 15 percent decrease in tumor density on contrast-enhanced CT scans (Partial response) correlates well with PET scan findings (Table 2) [12,13]. Fluid retention is a common side effect of imatinib therapy. Treatment-related fluid retention may be seen as ascites, a pleural effusion, a pericardial effusion, or extensive subcutaneous edema. New ascites or effusions noted on CT scans can be mistakenly regarded as a new finding of peritoneal disease when the disease is otherwise stable or resolving. This is an important consideration in evaluating the response [14].

Tumoral lesions may enlarge paradoxically during treatment in GIST. These enlargements can be due to the development of intratumoral hemorrhage or myxoid degeneration. Enlargement of the tumor does not indicate progression. Also at the beginning, uninvolved tumoral solid lesions may become cystic and may appear as new lesions in the later months of treatment. In this study, we presented the response evaluation process in our patient with metastatic GIST who received imatinib therapy.

Copyright: ©2018 Sen E, et al. This is an open-access article distributed under the terms of the Creative Commons Attribution License, which permits unrestricted use, distribution, and reproduction in any medium, provided the original author and source are credited.