Copyright: © 2014 Hammer L, et al. This is an open-access article distributed under the terms of the Creative Commons Attribution License, which permits unrestricted use, distribution, and reproduction in any medium, provided the original author and source are credited.

We describe the first case of thrombotic thrombocytopenic purpura (TTP) in a patient with Legionnaires’ disease. TTP was demonstrated by the low level of adams TS13 activity that resolved after plasmapheresis and remained normal in the long-term follow up.

A 40-year-old male was admitted to the medical intensive care unit with acute respiratory failure. The patient had no medical history and smoked 10 cigarettes daily 10 years ago. One week before admission, the patient saw his primary care physician because of chest congestion, nonproductive cough and generalized myalgias. Symptomatic treatment with analgesic and antipyretic was administered. The day before admission his symptoms worsened with productive cough and severe shortness of breath. A chest radiograph was performed, which showed diffuse bilateral opacities. Treatment with ceftriaxone and betamethasone was given. Twelve hours later, the patient was admitted in intensive care unit due to severe shortness of breath. Upon arrival, he was conscious and afebrile, the blood pressure was 77/51 mmHg, pulse rate was 140/min, and respiratory rate was 44/min. He was severely hypoxemic with 50% oxygen saturation while breathing ambient air and his oxygen saturation dropped to 76 percent while breathing 100 percent oxygen with a face mask. He was promptly intubated and placed on mechanical ventilation. Cardiac examination revealed a regular rate and rhythm with no murmur, rubs or gallop, and lung examination revealed bilateral rales. The remainder of the physical examination was unremarkable. He was sedated with midazolam and sufentanyl, and paralyzed with cisatracurium. He received immediately vasopressor treatment with norepinephrin after fluid resuscitation. Antibiotherapy was started with levofloxacin, erythromycin and ceftriaxone. Hematologic and blood chemical values are given in Table 1 and Figure 1, respectively. The arterial lactates concentration was 8.5 mmol/L. A chest radiograph showed progressive worsening of the opacities in both lungs. An electrocardiogram showed no abnormalities; neither did a transthoracic echocardiogram. Bronchoscopy and bonchoalveolar lavage were not performed immediately because of the hypoxemia. A sputum specimen contained few neutrophils with no microorganisms. Culture was started. A specific urinary-antigen test for detection of Legionella pneumophila serogroup 1 (Binax NOW Legionella®, Alere, 78350 Jouy-en-Josas, France) was positive. Therefore, he was diagnosed with adult respiratory distress syndrome and septic shock complicating Legionnaires’ disease. The patient remained severely hypoxemic and needed high level of FiO2, peep and prone positioning for 5 days. On the second day, sputum culture showed several colonies of L. pneumophila serogroup 1. Ceftriaxone was stopped. On the sixth day, the platelet count decreased to 20×103/mm3. A peripheral smear revealed microangiopathic hemolytic anemia with 10% schistocytes, and hemoglobin 72 g/L. The serum biochemistry showed LDH at 2589 UI/L, haptoglobin at 0.1 g/L, impaired renal function with BUN at 17.7 mmol/L and creatinine at 128 µmol/L. The prothrombin time, activated cephalin time, fibrinogen and d-dimmer were normal, and Coombs’ test was negative. We measured Von Willebrand factor cleaving protease (ADAMTS-13) activity <5% of normal. We found 57.2 U/mL inhibitor of ADAMTS-13. On the basis of the laboratory findings, thrombotic thrombocytopenic purpura (TTP) was diagnosed. Hepatitis panel and HIV serology were negative. Test for antinuclear antibodies and antineutrophilic cytoplasmic antibodies were negative. The results of serum complement testing and serum protein electrophoresis were also normal. A bone marrow aspirate revealed a hypercellular bone marrow with marked erythroid hyperplasia and megakaryocytic hyperplasia. The patient began daily plasmapheresis with 1.5 plasma volumes of fresh frozen plasma. He had a good laboratory response after 4 sessions and his platelet count was 184×103/mm3. Plasma exchanges were stopped but thrombopenia reappeared with a platelet count of 28×103/mm3 and schistocytes increase of 5%. We started new plasma exchanges daily during 5 days. We waited for 2 days after the platelet count returned to normal to stop plasmapheresis. After 12 days of treatment, the patient showed signs of respiratory improvement with fraction of inspired oxygen needs of 40% on a positive end-expiratory pressure of 8 cm H2O. Sedation was discontinued but a tracheotomy was performed on the sixteenth day because of difficulties of weaning due to neurologic weakness, and deglutition disorders. Indeed, the patient was severely weak and a neurologic consultation was requested. On neurologic examination, he was drowsy and had poor orientation, attention, information, and recall. An EEG showed no abnormalities. A head MRI with and without gadolinium contrast showed several occipital ischemic lesions, likely due to initial low cardiac output. Finally the patient's respiratory status slowly improved and mechanical ventilation was stopped one month after admission. His mental status also improved and he became fully oriented and deglutition disorders disappeared. Tracheotomy cannula was removed and he tolerated 3 to 4L of oxygen by nasal cannula 45 days after admission. The patient was finally discharged to a rehabilitation facility 50 days after admission. The ADAMS 13 levels returned to normal values. One year later, the patient had no relapse of TTP and remained in complete remission. 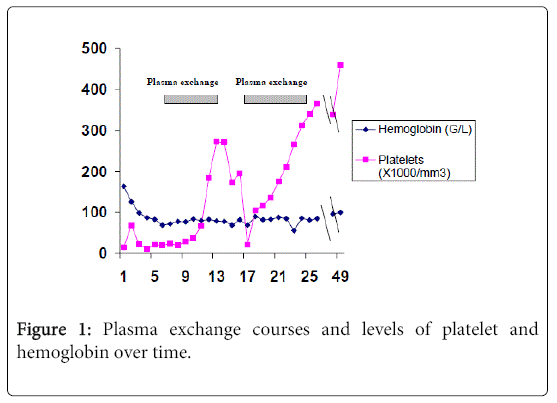 Figure 1: Plasma exchange courses and levels of platelet and hemoglobin over time.

We described here a patient with Legionnaire’s disease in whom the diagnosis of secondary TTP was made on the basis of laboratory typical features. Classically TTP was diagnosed as a pentad of signs: microangiopathic hemolytic anemia, thrombocytopenia, acute renal failure, neurological abnormalities and fever. In this case the diagnosis was difficult, as the patient was sedated and neurological examination could not be performed. Thrombocytopenia has a high incidence in medical critically ill patients (about 40%) [1,2]. Evaluation of microangiopathic hemolysis by determination of the schistocytes rate is not routinely performed. Although infectious diseases have been considered as a contributing factor of TTP, the predisposing pathogens have rarely been reported in previous literature. In the Oklahoma Thrombotic Thrombocytopenic Purpura- Hemolytic Uremic Syndrom (TTP-HUS) Registry, 7% of patients with an initial diagnosis of idiopathic TTP were subsequently found to have sepsis. Bacterial sepsis with Staphylococcus aureus, Streptococcus sp., Pseudomonas aeruginosa, Enterobacter sp., Rickettsia rickettsii were the most frequently reported. Other microorganisms may be occasionally involved such as Chlamydia pneumonia, fungi such as Pneumocystis jiroveci and viruses [3-5]. Many drugs have been reported as associated with TTP, such as quinine, ticlopidin, clopidogrel, oncological chemotherapeutic agents, and immunosuppressive agents. None of our patient's medications have been described as a cause of TTP. TTP associated with Legionnaires’ disease has been suspected in only one case [6]. Legionnaires’ disease or legionellosis is classically a severe pneumonia occurring after inhalation of aerosols formed from water contaminated with a Legionella species [7]. These Gram-negative bacteria are found in various aquatic environments, including in man-made water systems. Although more than 50 species have been characterized in the genus Legionella, L. pneumophila (especially its serogroup 1) is responsible for more than 90% of human infections [7]. The clinical symptoms of legionellosis pneumonia are poorly specific [7], and thus diagnosis is most often confirmed by detection of specific antigens in the urine of the infected patient. However, currently available urinary antigen tests only detect antigens from L. pneumophila sg 1 [8]. PCR-based tests have been recently introduced for diagnosis of legionellosis, and potentially allow detection of all Legionella spp. The mortality rate associated with legionellosis is on average 10-15%, but may be much higher in immunocompromised patients [7]. Life-threatening complications include respiratory failure, septic shock, and acute renal failure, to which TTP should now be added. The spontaneous mortality (without treatment) of TTP was initially close to 90%, but plasmapheresis treatment has recently decreased it to 10%. Indeed, for adults, plasma exchange is the only treatment considered as effective [9]. Its effectiveness has been attributed to the removal of ADAMTS-13 autoantibodies and replacement of ADAMTS-13 activity [10]. Daily plasma exchange is recommended with replacement of 1.0 to 1.5 times the predicted plasma volume of the patient [11]. The British guidelines recommend that plasma-exchange therapy be continued for a minimum of two days after the platelet count returns to normal level (>150,000/mm3) [11]. In our case, plasma exchange was stopped only one day after normalization of the platelet count, which may explain TTP relapse. In conclusion, the present case demonstrates that acute, single-episode of TTP can complicate Legionnaires’ disease. Early recognition of the diagnosis and prompt treatment with plasma exchange and antibiotic therapy could achieve good clinical outcome.