Copyright: © 2015 Man WH, et al. This is an open-access article distributed under the terms of the Creative Commons Attribution License, which permits unrestricted use, distribution, and reproduction in any medium, provided the original author and source are credited.

Tumor necrosis factor- alpha (TNF-α) is a well-studied cytokine that acts as an important central mediator in the on-set of inflammatory cascade and exerts anti-tumoral activity [1]. TNF-α can mediate opposing effects within the central nervous system, such as neurotoxicity through the caspases pathway, or neuroprotection through NF-κB dependent gene transcription [2]. As a potent proinflammatory cytokine, TNF-α levels rise in the nervous system after insults or after exposure to exogenous signals such as bacterial and viral proteins [3]. Beside the pro-inflammatory actions and mechanisms, the neuromodulatory face of TNF-α starts to be revealed [4]. For example, TNF-α enhances glutamatergic synaptic transmission by increasing surface expression of neuronal AMPA receptors [5,6]. Several findings have been pointing for a role of TNF-α in synaptic plasticity, more specifically in homeostatic synaptic scaling. Synaptic scaling is a type of plasticity, which involves adjustments in the strength of all synapses on a neuron in response to prolonged changes in its activity. First, it was shown that TNF-α mediates homeostatic synaptic scaling in response to prolonged blockade of activity [7-9]. A more recent study suggested that TNF-α is critical for maintaining synapses in a plastic state in which synaptic scaling can be expressed [10]. Homeostatic synaptic scaling mediated by TNF-α participates in experience-dependent brain plasticity [11]. Kaneko et al. described that experience-dependent plasticity in the developing visual cortex involves a homeostatic increase in responses, which is dependent on TNF-α signaling. Critical periods are restricted early development time windows during which the central nervous system displays heightened plasticity in response to events occurring in the environment. To determine the onset and duration of the critical period of experience-dependent plasticity in the primary auditory cortex, rat pups were exposed to pure-tones at different postnatal ages. Profound and persistent alterations in sound representations in the primary auditory cortex were found only when exposure occurred during postnatal day 11 (P11) to P13 [12], pointing this epoch as a window of critical period for plasticity in this cortical region [12]. Evidence point to a role of TNF-α in brain plasticity, but the modulation of endogenous TNF-α levels throughout a critical period of brain plasticity is not known. Here we document changes in TNF-α from before to after the critical period of experience-dependent plasticity in the primary auditory cortex. We assessed the endogenous TNF-α levels at different time-points around the critical period: before the critical period (P7), during the critical period (P12) and after the critical period (P30). Additionally, we measured the TNF-α levels in the frontal cortex at the same ages.

All experimental procedures were approved by the Institutional Animal Care and Use Committee of the University of California, San Francisco. Twenty-three female Sprague Dawley rats were studied. They were pre-medicated with atropine sulfate (0.02 mg/kg) to minimize bronchial secretions and dexamethasone (0.2 mg/kg) to prevent brain edema. They were then anesthetized with pentobarbital (35-60 mg/kg) and supplemental doses of pentobarbital (10 mg/kg, i.p.) were given if necessary. The right auditory cortex and the frontal cortex were exposed and auditory cortical responses were recorded with parylene-coated tungsten microelectrodes in a shielded, double-walled sound chamber. After the overall boundaries of the right primary auditory cortex were determined, the rats were deeply anaesthetized. The primary auditory cortex and the frontal cortex were rapidly dissected, frozen in dry ice and stored at -80°C until processing. Cortical fragments were lysed and acidified, and total protein concentrations were determined using the BCA assay. TNF-α was quantified using an ELISA kit (BD OptEIA™ Mouse TNF ELISA Kit II, San Jose, USA) as per the manufacturer’s protocol. 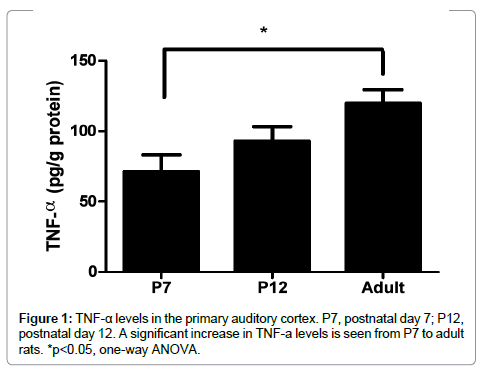 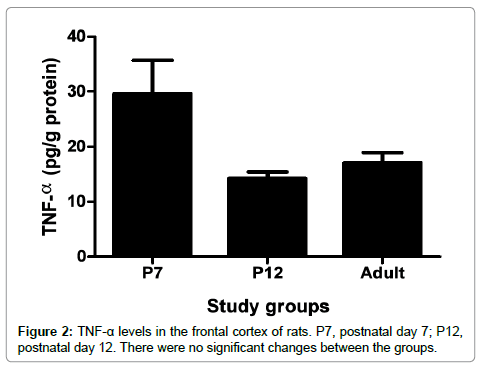 Figure 2: TNF-α levels in the frontal cortex of rats. P7, postnatal day 7; P12, postnatal day 12. There were no significant changes between the groups.

This work was supported by a grant from Fundação de Amparo à Pesquisa do Estado do Rio de Janeiro (FAPERJ, Brazil). RP is a recipient of the Long- Term Fellowship from the Human Frontier Science Program. CM is supported by a pre-doctoral fellowship from Conselho Nacional de Desenvolvimento Científico e Tecnológico (CNPq, Brazil). XZ is supported by the Program for New Century Excellent Talents in China. Thanks to Prof. J.C. Houzel for kindly reviewing the manuscript.