Copyright: © 2016 El Frargy MS, et al. This is an open-access article distributed under the terms of the Creative Commons Attribution License, which permits unrestricted use, distribution, and reproduction in any medium, provided the original author and source are credited.

Background: Early detection of renal affection in neonates is vital for early treatment and prevention of dangerous complications, so the using of some markers like urinary neutrophil gelatinase associated lipocalin (uNGAL), interleukin-18 (uIL-18) is very important as the commonly used detectors as creatinine are very late.

Conclusions: uNGAL and uIL-18 are considered simple and accurate markers in early detection of renal impairment in neonates which are better than serum creatinine

Kidney injury in neonates is a serious neonatal problem, particularly in neonatal sepsis and hypoxia that leads to failure of the kidneys to excrete wastes and maintain fluid balance [1]. Early detection of renal affection in neonates is essential for early management and prevention of serious complications. The old biomarkers for the detection of kidney impairment are serum creatinine, and blood urea nitrogen (BUN) which are late markers causing delaying in management of kidney impairment with bad prognosis [2,3].

Serum creatinine usually rises only 24-36 hours after renal impairment and it may also reflect the maternal renal state in this very early stage of life, therefore [4].

Some of the earliest non-invasive biomarkers of kidney impairment which could be used in neonates are uNGAL and uIL-18 [5].

NGAL is a 25 kDa protein of 178 amino acids, covalently bound to gelatinase from human neutrophils [6]. NGAL-2 was recently identified as one of the earliest proteins produced by the kidney after ischemic injury and this is reflected by the rapid rise in urinary NGAL- 2 reported in AKI. NGAL-2 concentration in the serum and urine has been demonstrated to be a sensitive and specific early marker of AKI after cardiac surgery [7].

Urinary interleukin-18 is also being promoted as an early noninvasive biomarker of kidney impairment in neonates. Interleukin-18 is an18 kDa pro-inflammatory cytokine initially synthesized in its inactive form (24 kDa) and subsequently cleaved by caspase-1 in the epithelial cells of the proximal tubules into its active form [8]. Urinary IL-18 performed best as a predictor of AKI at 12 h compared to other time points. Both uNGAL and uIL-18 were independently associated with duration of AKI [9].

The present study aimed to detect the role of uNGAL and uIL- 18 in detecting early renal impairment in neonates to help in early and accurate diagnosis with early management to prevent serious complications.

This study was approved by the ethical committees of faculty of medicine, Tanta University, Egypt. All chemicals unless otherwise described were purchased from sigma (Sigma, St Louis, USA). All chemicals and solvents were of high analytical grade.

We prospectively enrolled in this study 80 neonates who were admitted to neonatal intensive care unit at Tanta University Hospital from 6/2013 to 6/2015. Informed consents of the parents after a complete description of the study were obtained. Participants are divided in to 2 groups. Group 1 (kidney injury-patient group): This group included 40 neonates: who developed renal impairment later proven by BUN and serum creatinine. Group 2 (Control Group): This group included 40 healthy neonates without renal impairment.

Exclusion criteria: Abnormal maternal renal function, history of maternal renal disease, neonates with congenital anomalies, multiple malformations, and chromosomal abnormalities, failure of urine sampling to be obtained before 48 hours of birth, babies who did not develop renal impairment and babies who died during the study.

Blood sampling: Blood samples were aseptically collected sterile tubes. The collected blood was used for serum separation (centrifuged at 3000 rpm for 15 minutes at 4°C) and stored at -80°C for further analysis.

Each group will be subjected to the following:

Eighty newborns were included in the study (50 males and 30 females), subdivided into cases and controls. There is no significance between the two groups (P>0.05) as regard the gender and mode of delivery as shown in Table 1.

Table 1: Shows the gender and mode of delivery of all newborns.

Table 3: Shows mean of uNGAL, uIL-18 and serum creatinine in the day 1 of admission.

Table 4: Shows mean of uNGAL, uIL-18 and serum creatinine in the day 3 of admission. 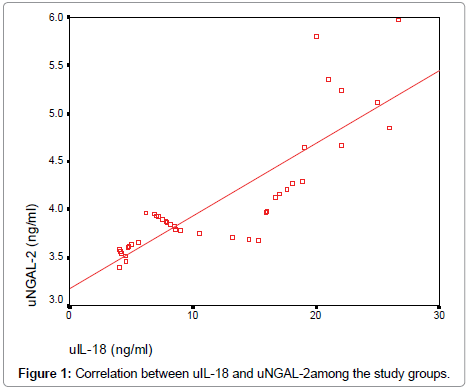 Figure 1: Correlation between uIL-18 and uNGAL-2among the study groups. 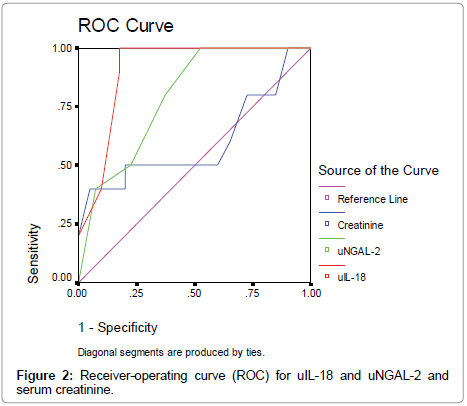 Renal impairment in neonates is characterized by a rise in the serum concentration of urea and creatinine and by failure of the kidney to maintain fluid and electrolyte homeostasis properly [12,13].

BUN and creatinine are late, nonspecific and non-sensitive markers in early detection of kidney impairment in neonates. A delay in diagnosis prevents early management decisions, including administration of therapeutic agents. Early biomarkers of AKI will facilitate earlier diagnosis and specific preventative and therapeutic strategies, ultimately resulting in fewer complications and improved outcomes [14,15].

In the present study, cases had significantly elevated uNGAL, as well as uIL18. Serum creatinine (Cr) is the most commonly used clinical measure of renal function, not injury, so it is a poor marker for diagnosis of AKI. Serum Cr may not increase until about 25% to 50% of renal function is lost [15]. uNGAL as well as IL18 are of significant clinical importance as early predictors of renal impairment, increased levels of these markers are supposed to indicate early tubular damage in cases of kidney injury [16]. In agreement with our study there were many studies which were done on children and revealed that NGAL- 2 and IL-18 rises significantly in patients with AKI if compared to controls, furthermore, the rise in NGAL-2 and IL-18 in these studies occurs at 24 to 48 h before the rise in serum creatinine and so these markers could be used as early predictors of AKI in neonates [17-24]. According to our results, neonates had significantly increased levels of uNGAL and uIL-18 which are of significant clinical importance as early predictors of AKI and can predict the development of AKI with high sensitivity and specificity.

Urinary NGAL and IL18 are excellent, simple and accurate markers in early diagnosis of renal injury in neonates which is earlier than serum creatinine.

All procedures performed in studies involving human participants were in accordance with the ethical standards of the institutional and/ or national research committee and with the 1964 Helsinki declaration and its later amendments or comparable ethical standards.

Informed consent was obtained from all parents of the neonates included in the study.