Copyright: © 2014 Saini D, et al. This is an open-access article distributed under the terms of the Creative Commons Attribution License, which permits unrestricted use, distribution, and reproduction in any medium, provided the original author and source are credited.

Human buccal cells are an easy source of nucleic acids (DNA/RNA) other than human blood. We have extracted buccal cells from mouthwashes of 10 individuals and tested its usefulness for genotyping, telomere length determination and gene expression. Genomic DNA was extracted using a salt precipitation method whereas total RNA was extracted using Hipura total RNA extraction kit. The quantity and quality of DNA and RNA was found to be satisfactory. PCR amplification was achieved using locus specific primers and genotyping was performed for minisatellites, microsatellites and Single nucleotide polymorphisms (SNPs). Telomere length was determined from the genomic DNA of buccal cells obtained from mouthwashes. Telomere length obtained from the DNA isolated from buccal cells and peripheral blood mononuclear cells was compared. Real time quantitative PCR was successfully performed for GADD45A, G6PD, B-Actin and B2M. In conclusion, our method of DNA /RNA extraction can be considered as an alternative method of sample collection for forensic medicine.

Isolation of Nucleic Acids from human peripheral blood samples serves as the most important source in studies pertaining to epidemiology, forensics and biomedical/molecular genetics. However, genotyping is sometimes difficult if the blood sample from an individual is not available. In that circumstance, the most preferred source of nucleic acids is buccal cells from where nucleic acids (DNA/RNA) can be extracted easily. Several studies have been undertaken using buccal cells as a source of nucleic acids. DNA obtained from buccal cells has been used for genetic studies [1-10] and cancer associated changes in oral cavity [11]. Total RNA obtained from buccal cells and its usefulness for gene expression studies is comparatively novel. Similarly telomere length determination from DNA from buccal cells is relatively new to population genetic and forensic medicine.

For epidemiological and forensic studies the ideal method of choice for genomic DNA or RNA should be rapid, non-invasive and with a good yield and quality of nucleic acids. Most of the methods use organic solvents for the procedure which are difficult to handle and are hazardous. We have collected buccal cells which is suitable for large scale population monitoring programme, genetic and genotoxicity studies. In the present study, we have introduced a simple nonenzymatic salt precipitation method for DNA extraction which can be useful for genotyping as well as telomere length determination.

This protocol gave high yield and good quality DNA which was be used for PCR amplification, quick to collect, requires no abstinence from food or drink. This process is devoid of using any enzymatic or phenol/chloroform steps for DNA isolation. We have used salt solution as mouthwashes in order to collect buccal cells for our study which can be easily handled for large scale population studies. Similarly attempts have been made to extract RNA from buccal cells which can be useful for gene expression study using total RNA extracted from buccal cells.

Collection of buccal cells from mouthwashes

We have introduced saline rinse method to collect the buccal cells from random donors. In this procedure, buccal cells were collected from individuals by rinsing the mouth in the morning with freshly prepared 0.9% of saline (NaCl) solution. Individuals were asked to rinse mouth with freshly prepared 15 ml (0.9% NaCl) saline vigorously at least for a minute. Then it was expectorated into a 50 ml collection tube. A total of 10 volunteers were participated in this study where mouth wash samples were collected from them in the morning with the above procedure.

DNA was quantified by taking absorbance (A260 and A280) using ‘Picodrop Microlitre Spectrophotometer. Purity and the concentration of isolated DNA were calculated. The ratio of absorbance at 260 and 280 nm was also obtained to determine purity of DNA and it was observed to be between 1.8 and 2.0. DNA was also subjected to electrophoresis using 1% agarose for qualitative analysis.

The genomic DNA isolated from buccal cells using our method was also checked if they could be used for SNP analysis. Three polymorphic loci were studied are XRCC3 (Thr/Met), MTHFR (C-T) and MTHFR (A-G). PCR amplification of genomic DNA was performed using locus specific primers and then subjected to restriction fragment length analysis using restriction endonucleases. The restriction enzymes used for XRCC3, MTHFR (C-T), and MTHFR (A-G) were NcoI, HinfI, and Taq1 respectively. The restriction digestion mixture contained 5μl of PCR product, 1 Unit of restriction enzyme each and kept at 37°C for overnight digestion. The digested products were run on 6% PAGE followed by silver staining.

Telomere length was determined using DNA obtained from buccal cells for 10 individuals using SYBR green based real time PCR approach. This method measures telomere length (T) with respect to a single copy gene (36B4). Telomere length in buccal cells and blood cells (leukocyte telomere length) was also compared in these individuals. For that purpose geneomic DNA was also extracted from peripheral blood mononuclear cells of these individuals. Genomic DNA (25 ng) was amplified using a telomeric specific primer and a single copy gene primer as described by Cawthon et al. [12]. This method measures the factor by which the ratio of telomere repeat copy number to single gene copy number differs between a sample and that of a reference DNA sample. PCR amplification was achieved using telomere (T) and single copy gene, 36B4 (encodes acidic ribosomal phosphoprotein) primers(S) which serves as a quantitative control. The mean telomere repeat gene sequence (T) to a reference single copy gene (S) is represented as T/S ratio which is calculated to determine the telomere length.

The PCR mixture contained 5pmoles of each of the primers, 100 uM of each dNTPs and 0.3 X SYBR green dye and 0.5 Units of Faststart taq DNA polymerase (Roche Diagnostics, GmbH, Germany). PCR reactions were performed in 20 ml reaction volumes using 25 ng DNA sample per reaction. The PCR reactions were performed using telomere and single copy gene primers in the same 96 well plate. The PCR thermal conditions for relative telomere length assay consisted of a initial denaturation of 5 minutes at 95oC,followed by a total of 40 cycles at 95°C for 5 seconds, 58°C for 30 seconds, and 72°C for 30 seconds and fluorescence acquisition.

Total RNA isolation, cDNA Preparation and quantitative real time PCR: Total RNA was also isolated from the cell pellet collected from the mouthwashes of these individuals using HipurA total RNA miniprep purification spin kit (Himedia Pvt ltd, Mumbai, India). The ratio of absorbance at 260 and 280 nm was also obtained to determine purity. Total RNA was quantified by taking absorbance (A260 and A280) using ‘Picodrop Microlitre Spectrophotometer, (Version 3.01). The concentration was calculated. Amount of RNA obtained was between 0.30μg to 1.94 μg per mouth wash collected.

High molecular weight DNA was isolated from the mouthwashes of 10 random and healthy volunteers using non-invasive, non-enzymatic and simple cost effective procedure. The average DNA obtained from buccal cells after mouth washes among these individuals studied were in the range of 3.5 μg-146 μg. The quality of DNA was good where the ratio of 260 nm and 280 nm was found to range from 1.8 to 2.0. Similarly the average RNA obtained from buccal cells of these individuals was ranging from 0.30 to 1.94 μg with a ratio of 260 nm to 280 nm to be around 2.0. 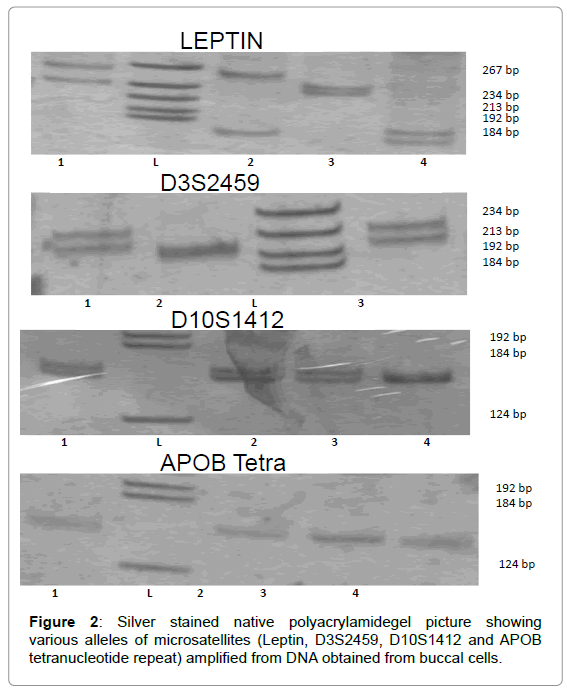 Telomere length is associated with respect to age, stress, other age related diseases such as hypertension and diabetes. We have measured telomere length using DNA obtained from buccal cells of mouth washes. For that purpose, relative quantitation was performed using a SYBR green based real time PCR approach. Telomere specific and single copy gene specific primers were used to amplify DNA. For each DNA sample the factor by which the sample differed from a reference DNA sample from its ratio of telomere repeat copy number to single gene copy number was measured. The mean telomere repeat gene sequence (T) to a reference single copy gene (S) is represented as T/S ratio which is calculated to determine the telomere length. Beta-globin gene was used as a positive control. The mean telomere length calculated was 1.21 ± 0.08. It was also compared with the telomere length measured from the DNA extracted from blood lymphocytes. The telomere length obtained from the DNA of both the sources did not show any significant difference in telomere length (Figure 4). The buccal cell and lymphocyte was isolated from the same individuals for comparison so that there was no error due to inter individual variation. 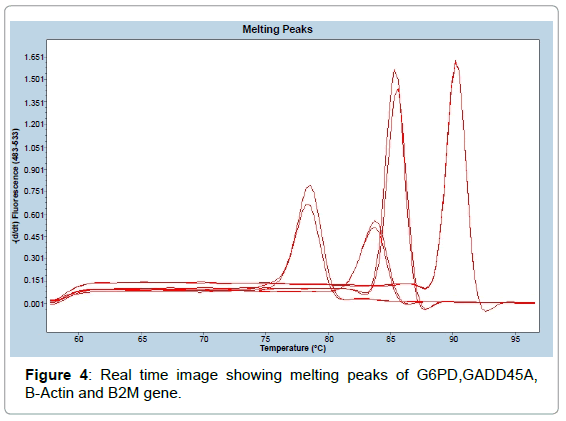 Gene expression study was carried out with the total RNA obtained from buccal cells. Total RNA was isolated and converted to cDNA using transcriptor high fidelity kit (Roche Diagnostics, GmBH, Germany). Gene expression analysis was carried out for cell cycle growth arrest gene (GADD45A). Three housekeeping genes (B2M, B-actin, and G6PD) were also taken into consideration to check the quality. Relative quantitation was carried out in LC480 using a SYBR green based assay. Melting curve analysis was done to find out the specific product and found to be specific (Figure 5). The amplified samples were resolved on 6% polyacrylamide gel followed by silver staining. 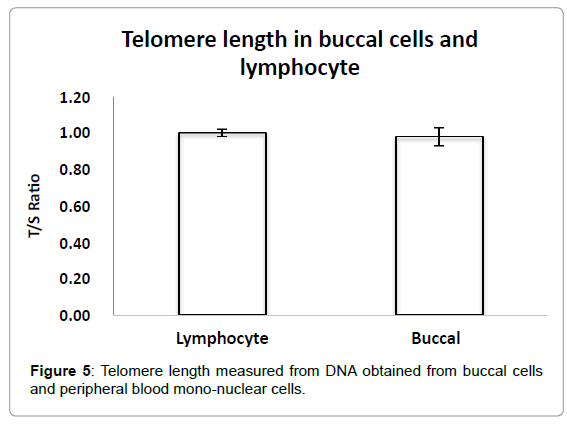 Genotyping is used regularly in forensic medicine and population studies. The source of DNA/RNA is usually isolated from human peripheral blood mono-nuclear cells. In case, the collection of blood samples becomes difficult to obtain from donors, buccal cells can serve a better substitute to collect nucleic acid which can be used for epidemiological, forensic and population studies [5,7]. This is a preferred source of choice as it involves non-invasive and relatively inexpensive procedures of isolating nucleic acids [8-10]. Using our method of DNA extraction, we have obtained a high yield and good quality of nucleic acids (DNA/RNA) from the buccal cells. Interestingly, all the samples were successfully amplified and genotyped using Amplified Fragment Length Polymorphism (Amp-FLP). Sterile saline is used to collect the buccal cells instead of commercially available mouthwash.

In the present study, the highest amount of DNA from the mouthwash of an individual was observed to be 145.7 μg. An average DNA yield of 30.7 μg is sufficient for more than 500 PCR reactions. The yield and quality was similar to other studies conducted by different investigators [7,13]. The quality of DNA obtained for all the samples showed high purity. All the samples were PCR amplified with 100% efficiency. The DNA obtained from buccal cells was successfully used for genetic polymorphism studies. It was successful for typing minisatellites, microsatellites and short tandem repeat polymorphism.

Telomeres are ends of eukaryotic chromosomes which are biomarkers of aging. The length of telomere decreases with increased oxidative stress. Telomere length was measured in buccal cells as well as peripheral blood mono-nuclear cells for a comparison. As shown in Figure 5, the telomere length is comparable. Hence buccal cells can be used for telomere length determination in forensic medicine as well as population genetics. Moreover, processing of buccal cells for nucleic acid isolation is a simple, inexpensive, non-invasive and could be used for large scale population monitoring programme.

The authors thank profusely to the volunteers for their active participation in their study.