Calibrated Win TR-20 model was validated and simulated to predict the peak runoff rates for 2, 5, 10, 25, 50 and 100 years for a small watershed area of 72 km2 in the southern region of Khyber Pakhtunkhwa of Pakistan. The catchment has a gauged spillway outlet at the downstream. The model was initially calibrated on the available known parameters from the grid survey and its derivatives, watershed physical features and other scales endorsed into the reservoir for monitoring. The calibrated model was tested and validated on physical data collected for duration of three months with a coefficient of determination of 98% among the observed and estimated runoff depths and peak runoff. After confirmation log-Pearson type III distribution was fitted to annual one day maximum rainfall upon which one day maximum rainfalls for 2, 5, 10, 25, 50 and 100 years return periods were simulated as 50, 80, 105, 144, 180 and 223 mm respectively. Run off depths for the same one day maximum rainfall of given returns period were further simulated as 10.34, 21.15, 30.3, 39.78, and 84.03 and 53.14 mm. Moreover the peak runoff rates for the return periods of 2, 5, 10, 25, 50 and 100 years were predicted as 11.3, 39.9, 77.7, 147.5, 221.9, and 320 m3s-1. Hence it was concluded that Win TR-20 provided satisfactory simulation of rainfall and their resultant runoffs and peak runoff rates which can be confidently recommended for use in small watersheds in the specific region of Khyber Pakhtunkhwa.

Analytically it is extremely difficult to convert an accounted amount of rainfall in an area into their runoff because it involves lot of factors related to soil, weather conditions and other unforeseen natural processes. However, making some assumptions, several methods have been introduced to predict runoff amount from rainfall with acceptable accuracy [1]. The Soil Conservation Service (SCS) now known as Natural Resources Conservation Service (NRCS) developed the TR- 20 computer model in 1964 for use in combined hydrologic studies of storm water [2]. Since its creation, it has been updated several times. With the last modification made in 2004 NRCS created a windows based model known as Win TR-20. Due to its simplicity Win TR-20 is the most widely used method for computing runoff volume and peak rate [3]. The TR-20 has been applied for storm runoff prediction in both agricultural [4,5] and urban [3,6] watersheds. The model was also used to calculate flood hydrographs in the Dreisam watershed in southwestern Germany [7]. Barfield et al. [8] modified the NRCS procedures of the TR-20 model to predict runoff volumes and peak discharges from a karst watershed. Cronshey and Woodward [9] revised the TR-20 model based on the approach in an alternative model named Ann AGNPS. Similarly, McCuen and Okunola [10] extended the TR-55 model, which is a simplification of the TR-20, to estimate peak discharge from micro-watersheds. In Korea, the TR-20 has tested to simulated runoff hydrographs in ungagged rural watershed [11]. These approaches require more field data and have focused on water quality estimation as well, the present study provides a sample case study to simulate storm hydrographs in a mixed land use watershed for the duration of 2, 5, 10, 25, 50 and 100 years return periods which makes implication of Win TR-20 for the utilization in other watersheds for estimating runoffs.

Where Q is accumulated runoff depth (mm), S is Potential maximum retention (mm),P is Accumulated rainfall depth (mm) and CN is Curve Number. Time of Concentration (Tc) was calculated with the following formula

Where Tc is time of concentration (hrs), L is longest flow length (m), CN is runoff curve number and Sg is average watershed gradient in m/m.

Win TR-20 Runoff model was used to predict peak runoff rate at outlet from its respective watersheds. Figure 1a shows map of the whole Kandar Dam watershed divided into five sub watersheds. All the required data related to the watersheds were provided to the model required. Figure 1b shows the schematic diagram of the watersheds that have been generated by the Win TR-20 model from the input data incorporated relating to the indicating watershed shown in Figure 1a. After the satisfaction on model understanding and acceptance of watersheds endorsement, the cross section rating, and structure and storm data were then provided as other inputs to the model. Figure 1a: Map of Sub-Watersheds along with their Reaches. 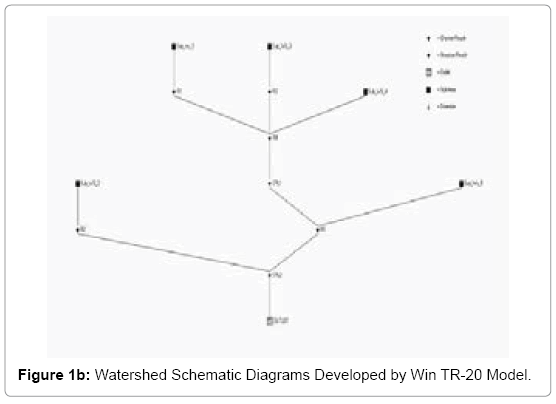 On the basis of available known parameters from grid survey and its derivatives, watershed physical features collected through field survey and other scales endorsed into the reservoirs and field daily dam record, the model was calibrated for the observed values of rainfall for generating peak discharges and volume of runoff. The grid survey of the whole reservoir including dam and its spillways and watershed area including waterways was performed and stage volume relationships were developed using SURFER computer software version 11. Runoff volume was estimated from the increase in storages of both the reservoirs and additional spillway overflow observed during storm. Applying the relation shown in equation 4 discharges from spillway was determined. To estimate spill over volume, discharges were multiplied with the observed duration. The estimated runoff depth was calculated by dividing the total cumulated volume over the whole watershed area.

The model was validated on three months (Jun, July and August of 2013) data with thirteen events of rainfall occurred. Out of all events six generated the runoff. Even a rainfall event for 24 hours from a 30 mm rainfall did not generate any runoff to be added to the reservoir. The successful events of runoff were found satisfactory for 95% confidence intervals (Figures 2 and 3 with an R2 of 0.9833). Hence Figure 2 shows successful validation of the model operation. After further success, model was then simulated for prediction of runoff for different returned periods of 2, 5, 10, 25, 50 and 100 years. 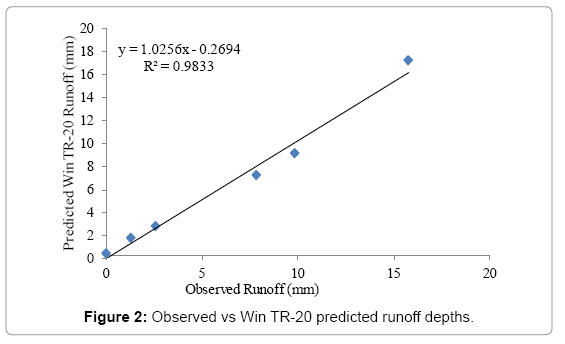 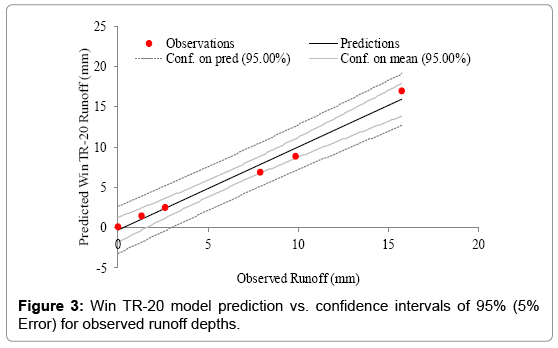 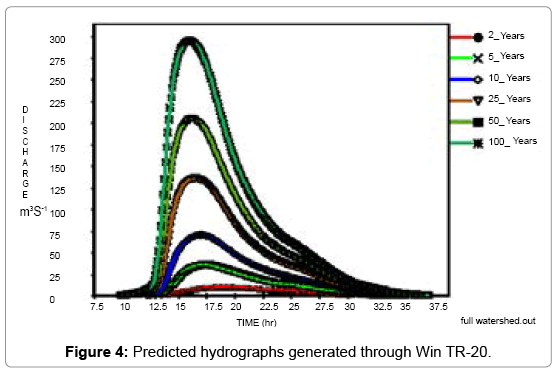 Copyright: © 2015 Muhammad J, et al. This is an open-access article distributed under the terms of the Creative Commons Attribution License, which permits unrestricted use, distribution, and reproduction in any medium, provided the original author and source are credited.