Copyright: © 2016 Piirila P, et al. This is an open-access article distributed under the terms of the Creative Commons Attribution License, which permits unrestricted use, distribution, and reproduction in any medium, provided the original author and source are credited.

Objectives: Body plethysmography is a lung function testing method usually applied for determination of thoracic gas volume and airways resistance, but option to measure work of breathing is available in most models. Although the method has been known over fifty years, assessment of work of breathing with it has not yet systematically studied in obesity. The aim of the study was to evaluate the relevance of work of breathing measured by body plethysmography in obese subjects and to compare the results with those of healthy controls and patients with pulmonary diseases of different pulmonary mechanics. Methods: Altogether sixty-two adults were studied prospectively: healthy non-smoking obese subjects (BMI > 30, N = 15), patients with interstitial lung disease (ILD) (N =15), emphysematic COPD (emphysema) (N = 16) and healthy non-smoking controls (controls) (N = 16). Inspiratory, expiratory and total work of breathing (WOBin, WOBex and WOB) and specific work of breathing (sWOBin, sWOBex and sWOB) were measured. Results: In obese subjects, WOB, WOBin (p < 0.001) and WOBex (p = 0.002) were elevated in comparison to controls. Also in ILD, WOB was significantly higher than in controls (p < 0.006). sWOBin, sWOBex and SWOB were significantly higher in emphysema than in the controls (p < 0.001). Conclusions: In obesity and ILD WOB whereas in emphysematic COPD sWOB differed significantly from controls, which is caused by differences in lung mechanics and lung volumes. The results concerning COPD correspond earlier study, but the present results suggest that body plethysmography is suitable for the assessment of work of breathing also in obesity.

Recently we applied flow plethysmography (variable volume or constant pressure plethysmography, when the patient is sitting in a box and breathing through a pneumotachograph outside the box and the volume changes inside the box are measured by a spirometer on the wall of the box) [7] to demonstrate, how alveolar gas compression distorts the forced expiratory flow-volume-curve in patients with different pulmonary mechanics at least at the middle fraction of forced expiratory flow. Different profiles of gas compression in stiff lungs, in patients with decreased elastic recoil in emphysemaand in obesity were found [13]. In the present study, the same patients were explored in constant volume mode, exploring the relevance of calculated work of breathing indices.

Work of breathing was investigated in four groups of subjects with different pulmonary mechanics: healthy non-smoking subjects (controls), healthy non-smoking obese subjects (obese), patients with interstitial lung disease (ILD) and smoking or ex-smoking patients with COPD with emphysema (named here as emphysema) [13]. The differences in work of breathing in these groups were evaluated. In addition, correlations of work of breathing with some spirometric variables, diffusing capacity for carbon monoxide and trapped air were calculated.

The anthropometric and smoking data are summarised in Table 1. The details of the controls and patients studied prospectively are presented more thoroughly in an earlier publication [13]. Healthy obese non-smoking subjects (N=15) (BMI > 30), non-smoking patients with interstitial lung disease, mostly with moderate or severe degree (ILD) (N=15) (BMI < 30) and patients with severe or moderate emphysematic COPD assessed with reduction in pulmonarydiffusing capacity for carbon monoxide [14] (emphysema) (N=16) (BMI < 30, FEV1/FVC < 0.7) were included in the study. However, patients with a significant bronchodilator response (FEV1 ≥ 12% and > 200 mL) in spirometry were excluded. Also healthy non-smoking subjects (N=16) (BMI < 30) of similar gender and age as the patients were studied. The study has been approved by the ethical committee of Helsinki University Central hospital and the participants have given informed consent to the study.

Body plethysmograph MasterScreen body Version 4.3., Würzburg, Germany was used and the measurement of the resistance of airways, specific conductance are presented earlier [13]. The measurements of breathing work were performed with a tidal breathing frequency of 30 breaths per minute at FRC level. For the measurement of resistive work for sWOB the whole resistance loop was measured continuously in real-time and effective airways resistence (sReff) was measured by integration of the ratio between the volume displacement tidal flow and the tidal-volume loop. sWOB was obtained from sReff computing, sReff being integral of the tidal flow volume / sWOB. According to the manufacturer, the estimate of specific work of breathing was determined as follows:

Graphical examples of measurements of sWOB can be found in Figure 1 in one healthy subject, one patient with ILD, one with emphysema and one healthy obese subject. With increasing sWOB the area under the curve increases.

Some of the breathing work parameters were not normally distributed. Because of age and gender differed between the groups, the Wald Chi-Square test with adjustment for age and gender was used to compare the patients with ILD, emphysema and obesity with the control group.

The parameters of work of breathing for the whole patient material (N = 62) were not normally distributed and therefore the Spearman correlations were calculated.

Table 1: Anthropometric and smoking data on the subjects and patients [13]. Table 3: Spearman correlations of breathing work and spirometric and diffusing capacity results in all subjects (N=62).

In all subjects and patients, inspiratory, expiratory and total sWOB were inversely correlated with DLCO, DLCO/VA, FEV1/FVC ratio and MEF50 (Table 3) and positively with trapped air (p < 0.05). sWOBex and sWOB were correlated with RV and RV/TLC (p < 0.05). WOBin, WOBex and WOB correlated inversely with ERV (Figure 3). Correlations between sWOB or WOB and TLC or VC became nonsignificant when the lung volumes were calculated as percent of predicted value.

In the subgroups these correlations were minor or missing possibly based on the restricted number of patients and rather homogenous groups (data not shown). 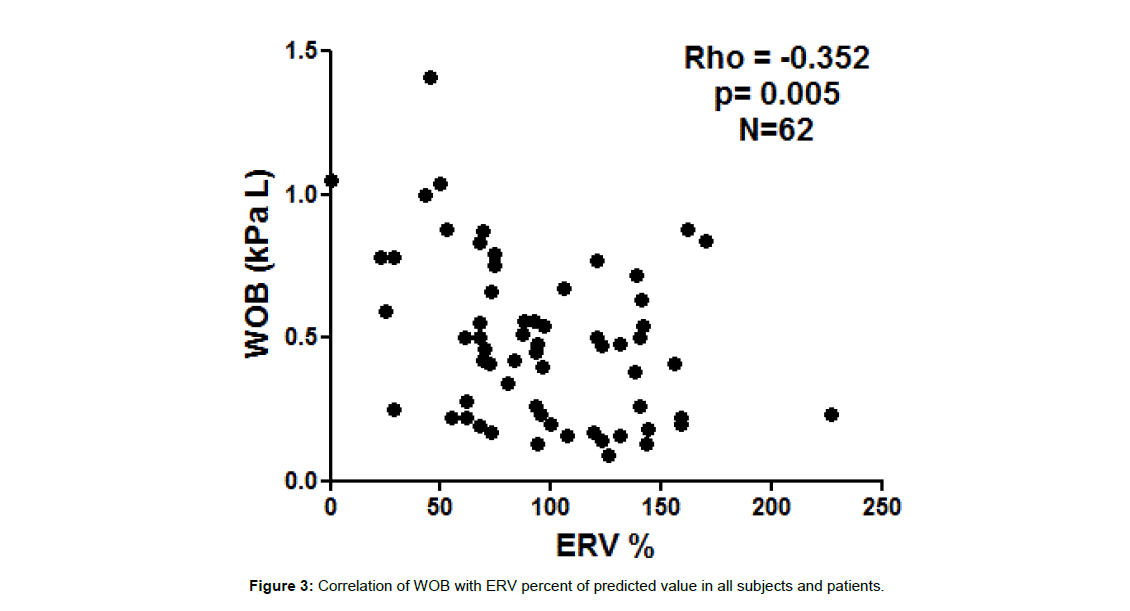 Figure 3: Correlation of WOB with ERV percent of predicted value in all subjects and patients.

In ILD, WOB and in obesity also WOBin and WOBex were increased compared to controls. However sWOB in obesity or ILD was not increased compared to controls, the explanation which is that lung volume is incorporated in the formula of WOB but not in the formula of sWOB. The same explanation might in emphysema explain the opposite finding - sWOB being significantly different from controls, and WOB differing nonsignificantly from the controls. Anyway, the present results indicate that both sWOB and WOB are needed in assessment of work of breathing depending on the characteristics of the disease studied. Also in previous literature, increased work of breathing in obesity has been found [3,16,17]. Compliance of the lungs and the respiratory system are low because of fat accumulations in thorax and abdomen. Pleural pressure is increased and the dimensions of peripheral airways are diminished. Obese patients are breathing against increased intraabdominal mass, requiring increased pressure-volume work. Especially inspiratory work of breathing is increased which causes strain to the diaphragm [2,4,5,18,19]. Furthermore, the ventilatory drive may be decreased in obesity [20]. In a consequence, in obesity the increase of peripheral resistance leads to an increase of air compression and finally work of breathing is increased.

In the whole patient material, a negative correlation between inspiratory, expiratory and total WOB and ERV percent of predicted value was found. ERV was negatively correlated also with BMI (-0.296; rho=0.019) suggesting that obesity would be involved in this association between ERV and WOB, as would also be expected [21]. In obesity, the adipose masses in thorax and abdomen reduce the function of diaphragm which all decreases FRC. As a consequence, ERV declines because FRC is reduced and the residual volume (RV) is not. Within the obesity group, the association between ERV and WOB did not reach significance most probably explained by the small number in the rather homogenous group. Also ILD is characterized by small ERV as outcome of the restrictive pulmonary disease, whereas controls and emphysematic COPD patients typically showed large ERV, giving sufficient variation for correlation calculations within the whole material of patients and subjects.

In COPD with emphysema, inspiratory, expiratory and total sWOB and WOBin were significantly increased compared to controls. In COPD with emphysema this finding might be explained for the most for the obstructive component of COPD evoking resistive breathing work, because the elastic component of breathing work of emphysematic lung is probably not measured with the used method as easily as the resistive work caused by the obstructive component. This is also in line with earlier study [11]. In addition, significant inverse correlation of diffusing capacity and specific diffusing capacity, and positive one with air trapping and RV with sWOB was found through the whole patient material.

One restriction of the present study was that the patient groups were not very large, but this comes from the difficulties to find suitable patients during the study period. However, there were significant differences between the patient groups and control subjects. In addition, significant correlations between parameters of work of breathing and several conventional lung function parameters were found in the whole patient material.

Nowadays the dyspnoea index is usually determined utilizing different questionnaires [22], which however, is a rather subjective approach. Body plethysmography offers an objective non-invasive method to assess work of breathing, as a reason of dyspnoea. The method appears to be useful in measurements of obese subjects. In obesity, there is still a need for this kind of comfortable, easy and non-invasive test; e.g., to differential diagnosis of dyspnoea or simply to demonstrate the increased work of breathing as motivation for reduction of weight.

sWOB can be determined with every conventional plethysmograph, representing the integral of breathing volume at mouth (dV) and box shift volume (dVbox). Therefore sWOB and WOB are available on anybody plethysmography equipment as soon as these parameters are determined and provided. The present results encourage applying these methods in assessment of respiratory symptoms in obesity.

As a conclusion, body plethysmography is available nearly in all well-equipped laboratories performing lung function tests. The results indicate that this non-invasive method might be helpful to assess a surrogate of work of breathing in obese subjects in order to assess the reasons for their dyspnoea.

The authors thank MSci Ritva Luukkonen for statistical consultations. The contributions of the authors. PP and AS are responsible for study design, UH and PP for patient collection, PP for data collection and analysis, H-JS being the technical expert. All authors were responsible for manuscript writing.