Bhimtal Lake situated in Uttarakhand, India, and has been devastated due to anthropogenic activities. In this study we examined the diversity and distribution pattern of zooplanktons in the Bhimtal Lake, along with evaluation of the relationships among different zooplankton groups and abiotic factors during the period September, 2013 to August, 2014. Sampling was done seasonally, during summer, winter and monsoon seasons, at three sites in Bhimtal lake. Sample analysis revealed the presence of 29 species of zooplankton including 16 species of Rotifers, 8 species of Cladocera and 5 species of Copepods. Rotifera group was the most dominant among all three groups. Positive co-relation was found between zooplankton growth with water temperature and pH while, there growth was adversely affected with increasing alkalinity, nitrates and dissolved oxygen. The diversity of Rotifers, Cladocera and Copepods were highest during summer, and was lowest during winter, while their density and biomass were found to be highest at the surface water during summer. It can be stated that the tropic nature of Bhimtal Lake may have been changed to mesotrophic conditions.

Zooplanktons are microscopic free swimming animals which represent a major part of aquatic fauna and are known to be indispensable link between the primary producers and consumers of Lake Ecosystem. Their diversity and abundance plays a major role in management of aquaculture [1]. Zooplankton communities are known to be highly susceptible to a wide range of factors like environmental changes, temporal abundance and seasonal variation, and their diversity is a marker of water quality in trophic conditions in cold, temperate and tropical waters [2]. Moreover, they are also known to play a primary role in functioning and productivity of lake ecosystems, and make up a major portion of its biomass [2]. Due to their importance in aquatic ecosystem, much attention was paid on their ecobiology. Zooplanktons also have enormous ecological value as they are primary consumers of phytoplanktons, and also recycle the nutrients. The structure and assemblage of Zooplankton communities is dependent on many physic-chemical and environmental factors such as rainfall, air and water temperature, nutrient concentration and salinity of lake.

Availability and quality of food resources in the aquatic ecosystem directly affects the phytoplankton abundance, which in turn induces the change in distribution pattern of zooplankton species [3]. However, zooplankton diversity and density also depends on the inter-specific predation by invertebrates [4]. Rotifers, Cladocerans and Copepods are considered to be most important species for measurement of population density, biomass production, grazing and nutrient regeneration in lake ecosystems.

Diversity indices have been used as an important tool by ecologists to understand community structure in terms of richness, evenness or total number of existing individuals [5,6]. Bio-monitoring of the lake ecosystem includes the study of phytoplanktons, zooplanktons, macrophytes, macro-micro benthos and tertiary consumers. The present study was designed to outline the temporal distribution pattern, along with measuring species diversity of zooplankton during the year 2013-2014. Furthermore this study also evaluates the relationship among different zooplankton groups and abiotic factors in Bhimtal Lake.

Bhimtal Lake is situated between 29° 21′ N latitude and 79° 24′ E longitude, at an elevation of 1332 m above mean sea level in Kumaun region in the state of Uttarakhand (India). The surface area of the lake is approximately 85.26 hectares and is largest amongst Kumaun lakes. The lake has a small island towards the outlet, while the inlet is in the form of a small channel; it also has warm monomictic under subtropical region. The outlet of the lake is through a sluice gate (Island zone). The morphometric characteristics of Bhimtal Lake are given in Table 1. The lake can be divided into three zones as per its physio-geographical position; The Lake serves as a vital source of water for a variety of purposes.

The water samples were collected seasonally (summer, monsoon and winter) from the Bhimtal lake during study period (September 2013 to August 2014). Three sampling sites were chosen to collect the samples in Bhimtal lake viz. site I, site II and site III (Figure 1). The zooplanktons were collected by filtering 100-liter surface water through plankton net (0.1 mm mesh size), and were fixed in 5% formalin containing 2 to 3 ml of glycerol for further studies [7]. Quantitative estimation was done using Sedgwick rafter cell counter. The samples analysis and pictures were captured with a digital camera under a microscope and identification of the specimens was done as described elsewhere [8-10].

Ecological correlations between abiotic and biotic parameters were determined by simple correlation coefficients (r). Species diversity of zooplanktons of the lake was determined by Shannon Weaver index (H) [13]. The following formula was used to calculate diversity index:

Where, H’= Shannon Diversity Index, ni= Total no of individuals of the species

N= Total number of individuals from all species Ecologically Cladocera can be classified as the most important component of zooplankton community. These are found to proliferate at higher rate in water bodies, and consist of 8 species of different genera in Bhimtal Lake. The most abundant species observed were Alona, Alonella, Chydorus, Ceriodaphnia, Daphnia, Macrothrix, Pleuroxus, Simocephalus, while Daphnia species was the most dominant in the Cladocera group. One recent study indicated that zooplankton of Kashmir lakes consisted of Daphnia, Ceriodaphnia, Simocephalus, Scapholeberis, Bosmina, Graptoleberis, Alona, Alonella, and Chydorus among the Cladocera [14]. Interestingly, Ceriodaphnia and Daphnia were the most commonly recorded species in all study sites in Bhimtal Lake.

Freshwater Copepods constitute one of the major zooplankton communities. They serve as food to several fishes and play a major role in the energy transformation at different tropic levels. In Bhimtal Lake, Copepoda consist of 5 species. The most abundant species were Phyllodiaptomus, Mesocyclops, Microcyclops, Eucyclops, and Cyclops, with Cyclops being the most dominant species. 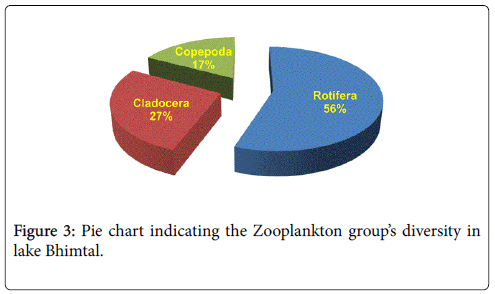 Distribution pattern of zooplankton species with Temporal and Seasonal Changes

During June, Rotifers were the most dominant group in Bhimtal Lake. Pouring evidence suggests that the Rotifers population density depends up on the availability of food and temperature [16]. In conjunction with the previous studies we also found that Rotifersshowed a single peak in population density (1.433 ind/L) during summer at all three sites, while maximum Rotifers (46.37%) were recorded at site I due to the presence of macrophytic vegetation (Table 4). The Shannon weaver diversity indices values were maximum during summer (2.80) at site I and minimum in winter (2.50) at site III in Bhimtal Lake (Table 5). Moreover, during summer, the surface temperature of the lake reached to its maximum resulting inhigh Rotifer density and biomass whereas, during winter, the density and biomass of Rotifers at the surface of lake was found to be minimum at all the three sampling sites in Bhimtal Lake, strengthening the fact that Rotifer growth is enhanced during warm periods. High temperature and phosphate content might also have a positive effect on multiplication, reproduction and metabolic rates of Rotifers. Earlier studies have reported that the maximum Rotifer density requires optimal nutrient and temperature conditions along with favorable dissolved oxygen content [17-19]. Among the Rotiferan species Brachionus sp. and Keratella sp. were the most commonly found in all the sampling sites and many of the recorded species were cosmopolitan in distribution. One of the studies by Hutchinson [20] observed that Brachionus sp. was very common in Bhimtal Lake because of its temperate and tropical water having alkaline pH.

Table 4: Effect of temporal distribution and seasonal changes at the density (103 ind/L) and biomass (mg/l) of zooplankton groups.

The density and biomass of Cladocera maximum during summer (0.657-1.104 ind/l) at site I than in any other season (Table 4). Some studies have indicated that the main abiotic factor that affects the distribution of Cladoceran species is temperature [21]. While a study by Bhowmic [22] reported that in summer zooplankton population increases due to higher concentration and increased photosynthetic activity of phytoplanktons. Also, dominance of Cladocera among zooplankton during summer might be due to optimal thermal and nutritional conditions and lower concentration of oxygen [23]. We found that, Cladocera species also showed higher Shannon diversity index value (1.71) in summer at site I and lower value (0.80) in winter at site III in Bhimtal Lake (Table 5 and Figure 4). The diversity and abundance of Caldocerans has been associated with the variation in pH [24]. Furthermore, increase in the nutrient content of the water body is a well-known factor that affects the Cladoceran density [25]. 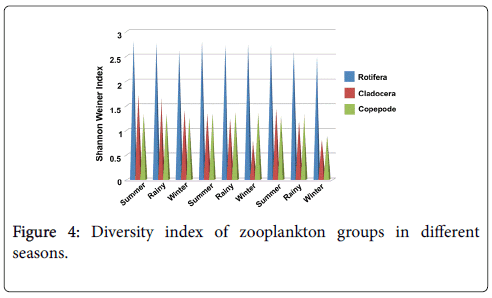 Our study clearly showed that Shannon diversity index for Copepod was maximum in summer (1.32) and minimum in winter (0.88) (Table 5). Few studies also suggest that increase in zooplankton diversity was found to be highest in summer and lowest in winter at Seetadwar lake, Uttar Pradesh, India [26], further strengthening our results. Additionally, the maximum density of Copepod was recorded in summer (0.863 ind/l) and biomass (0.401 mg/l) at site I and minimum density (1.71 ind/l) and biomass (1090 mg/l) were recorded in winter season at site III, respectively (Table 4).

The composition of zooplankton comprised of 29 species belonging to Rotifera, Cladocera and Copepoda. The present observations showed that the Rotifers were the most abundant of all groups contributing 46.2-69.6%, followed by Cladocera 17.8-24.3% and Copepoda 10.6-20%. The highest density of Rotifers was recorded in all sampling stations from March to July (51.35-68.14%) however; minimum value (44.2%) was recorded in January. Interestingly, seasonal variations were absent in Copepoda (36.7% in March).Growth of zooplanktons were maximum in summer and minimum in winter, the reason may be fluctuations in light intensity and temperature, in turn affecting the food supply of zooplanktons. The present study sheds light on the growth pattern of different zooplankton groups and may form a useful tool for further assessment and monitoring of this water body.

Copyright: © 2015 Panwar S, et al. This is an open-access article distributed under the terms of the Creative Commons Attribution License, which permits unrestricted use, distribution, and reproduction in any medium, provided the original author and source are credited.