Copyright: © 2013 Rathore S, et al. This is an open-access article distributed under the terms of the Creative Commons Attribution License, which permits unrestricted use, distribution, and reproduction in any medium, provided the original author and source are credited.

Poisoning is a major problem in the pediatric population. The offending substances used vary from place to place. Although the clinical outcome of these exposures is usually favorable, deaths do occur. The present study was undertaken to determine in children the major offending agents, their seasonal distribution, mortality associated with them and change, if any in the type of poison by comparing data with previous studies available. This prospective study was carried out at King George Medical College and it’s associated Gandhi smarak hospitals, Lucknow. A total of 100 pediatric patients of <15 years of age made the material of the following series. 62% were under 5 years of age and 70% male. Incidence was also more common in urban areas (55%) as compared to rural (45%) and rainy season was found to be the most vulnerable period for poisoning. Kerosene and snake bite were the most common offending agents, both accounting for 31% cases each. Mortality of 4% was reported. Mortality due to poisoning in children has remained high over the last five decades (2.9%-4.7%). Kerosene has remained the single largest contributor to childhood poisoning (51.5% in the 1960s vs. 52.8% in the 1990s).

Poisoning is a major problem in children all over the world. However the offending agent and the associated morbidity and mortality vary from place to place and change over a period of time. With the control of infectious diseases, the contribution of poisoning to childhood mortality and morbidity has been increasing in developed countries [1-6]. The developed world has accurate information on incidence and changing trends of causative agents as a result of rigorous population census and mortality data and the development of poisons control centres (PCC) [7-11]. In contrast, pediatric poisoning incidence in developing countries is poorly documented [8,12,13]. Likewise in India limited data are available on morbidity and mortality related to poisoning in children, in particular the changes in its pattern over the years. Many studies have been done relating to the age incidence; sex incidence; socio-economic status; seasonal distribution; type of poison consumed; mode of poisoning and outcome of cases.

The present study was undertaken to determine in children the major offending agents, their seasonal distribution, mortality associated with them and change, if any in the type of poison by comparing data with previous studies available.

This prospective study was carried out at King George Medical College and its associated Gandhi Smarak hospitals, Lucknow over a period of 1 year from Jan 2011 to Dec 2011. All cases of toxin exposure or poisoning whether bites, household poisons, agricultural or medicinal compounds were included. Detailed case history was obtained from the attendant regarding the nature of poison, time of consumption, circumstances of poisoning and immediate symptoms.

A total of 100 poisoning cases of <15 years of age were studied in the pediatric department of KGMU, Lucknow. 62% were under 5 years of age and 70% male (Table 1). Incidence was also more common in urban areas (55%) as compared to rural (45%) (Table 1) and rainy season was found to be the most vulnerable period for poisoning when 36% of the cases were reported (Table 2). Kerosene and snake bite were the most common offending agents, both accounting for 31% cases each (Table 2). Maximum number of kerosene poisoning cases was reported in summer while in rainy season cases of snake bite and organophosphorus poisoning were more common. Mortality of 4% was reported in this series and it was found to be maximum in snake bite cases followed by kerosene poisoning & organophosphorus poisoning (Table 3).

The childhood unintentional poisoning death rate has declined over the past decade, largely due to child resistant packaging, product reformulation, heightened parental awareness and appropriate interventions [14]. However children continue to be at significantly greater risk than adults for unintentional poisoning, because they are smaller, have faster metabolic rates and are less able to physically handle toxic chemicals. In addition natural curiosity and their desire to put everything in their mouth increase their poisoning risks.

Present study observed that the most vulnerable age group for poisoning is under 5 years which is consistent with studies from Jordan [15]. In various studies from Kuwait [16], Bangladesh [17], and Colombo [18], 1-3 years was reported to be the most vulnerable age group to be affected. Hussein A Bataineh et al. [19] from Saudi Arabia & Raymond Cripps et al from Australia observed that majority of children were under 5 years of age group.

There was a male preponderance in the present series which is concurrent from various other works [17,18-21].

In the present series, rainy season was the most vulnerable period when maximum no. of cases was reported followed by summer, winter and spring. This was in agreement with various other works [17,23,24]. This can be explained on the basis of more snakes coming out during rainy season due to filling of water in their burrows and thus increasing the human snake interaction resulting in more no. of snake bites during the season, while summer being a dry season, thirst causes an increased attraction towards liquids thus increasing cases of accidental poisoning especially Kerosene poisoning which was the commonest poisoning in present series. This was again consistent with various studies from Kuwait [16], Colombo [18] & New Delhi [21]. This can be attributed to the use of kerosene oil as a fuel especially in lower income group, its storage in easily accessible places & its colour which is often mistaken for soft drink.

4% mortality was found in our series. Similar mortality incidence was reported from Lalitpur (UP), Nepal & Oslo [25,26].

Poisoning is most common in 0-5 years age group as far as pediatric poisoning is concerned; also it is more frequent in males of urban areas especially in lower income group. Rainy season is the most vulnerable period, when maximum no. of snake bites are reported while kerosene poisoning is the most frequently reported household poisoning. Around 4% cases prove to be fatal and snake bites are responsible for most of the poison related fatalities in children (Figure 1). 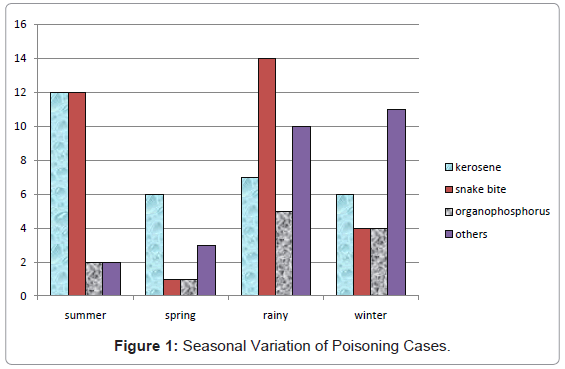 There is a need to establish regional toxicological centers which can help guide hospitals in the quick identification of poisons and provide guidelines for treatment. There is also a need to initiate public awareness campaigns to attempt to decrease morbidity and mortality from this eminently preventable problem.

We thanks to the Department of pediatrics and Forensic Medicine & Toxicology of King George’s Medical University, who facilitates our mission at the University.