Copyright: © 2010 Nieder C, et al. This is an open-access article distributed under the terms of the Creative Commons Attribution License, which permits unrestricted use, distribution, and reproduction in any medium, provided the original author and source are credited.

Background: Recursive partitioning analysis classes is the prognostic score that has been found by several groups to predict survival in patients with brain metastases from primary breast cancer. Recent data suggests that primary tumour characteristics might provide further important information. Methods: The impact of primary tumour size, histological grade, hormone receptor status, number of lymph node metastases and Nottingham prognostic index (NPI) was evaluated together with established factors such as performance status by uni- and multivariate analyses in 90 patients. All patients had been treated with whole-brain radiotherapy with or without radiosurgery or surgical resection. Results: In multivariate analysis, only performance status, age and interval from primary tumour diagnosis to brain metastases were significant. Patients with favourable NPI survived longer. However, this finding is based on a small group of patients and needs to be confirmed in larger studies. Higher histological grade and NPI were associated with significantly shorter interval to development of brain metastases. Conclusions: The standard brain metastases scores might not fully appreciate the unique biology and time course of breast cancer. Emerging prognostic factors such as NPI or triple-negative status might improve the models currently used by clinicians.

Several groups have recently provided data that improve our understanding of prognostic factors in patients with brain metastases from breast cancer (Bartsch et al., 2006; Bartsch et al., 2007; Claude et al., 2005; Melisko et al., 2008; Melisko et al., 2009; Nam et al., 2008). The unique biological features of breast cancer allow for therapeutic approaches that might improve the response of both extra- and intracranial disease manifestations, e.g., trastuzumab, lapatinib, aromatase inhibitors etc. (Bartsch et al., 2006 and 2007; Melisko et al., 2009; Sutherland et al., 2010). Emerging data suggests that the increasing use of these drugs might also impact on survival (Bartsch et al., 2007; Nieder et al., 2008; Nieder et al., 2009; Niwinska et al., 2009). In order to avoid overuse of costly treatments and the potential side effects of therapy, accurate prognostic models need to be developed. These considerations have led us to study the usefulness of established prognostic scores in this particular patient population (Nieder et al., 2009). While scores such as the recursive partitioning analysis (RPA) classes (Gaspar et al., 1997) performed quite well, evidence from several studies reviewed in Nieder et al. (2009) suggests that additional factors should be evaluated. The present short communication builds on these findings and examines the prognostic impact of primary tumour characteristics (T- stage, N-stage and histological grading). Due to the limited size of the study population, the purpose is to generate hints and hypotheses and to stimulate further research activity around these potential prognostic factors.

We used our previously described database of female patients with brain metastases from breast cancer treated with whole-brain radiotherapy (WBRT, most often 10 fractions of 3 Gy administered via lateral opposing 6MV photon beams that did not cover the upper cervical spine/optic nerves) with or without surgery or radiosurgery (Nieder et al., 2008; Nieder et al., 2009). The database, which was updated in October 2009, included 103 patients. Ninety of these had information on all 3 primary tumour characteristics available. In the remaining patients, primary surgery was performed so many years ago that missing data could not be collected or recovered. The patient characteristics are shown in Table 1. With regard to established prognostic factors such as Karnofsky performance status (KPS), age or extracranial metastases no statistically significant differences existed between the 90 patients analysed here and the 103 patients in the database. KPS prior to treatment was routinely documented in all patient charts. Hormone receptor status was known in 80 patients. HER2 receptor status was available in 75 patients and therefore only exploratory analysis of this parameter was performed. Systemic treatment (chemotherapy, hormonal therapy, trastuzumab) was provided as indicated for extracranial disease manifestations, taking performance status, previous systemic therapy and organ function into consideration. Thirty-six percent of HER2 positive patients received trastuzumab-containing regimens after their local treatment for brain metastases. The systemic treatment algorithms provided by the Norwegian Breast Cancer Group were followed (www.nbcg.no). These algorithms did not include screening for brain metastases in clinically asymptomatic patients. At the time of analysis, 8 patients were alive (median follow-up 7.2 months, range 2.2-34). The Kaplan-Meier method was used to generate actuarial survival curves. These were compared with the log rank test. Multivariate analysis of prognostic factors was performed with the Cox proportional hazards model (forward stepwise data selection method). For comparison of dichotomous variables the chi square test and Fisher’s exact test, where applicable, were employed and for continuous variables the Mann-Whitney U-test. A p-value ≤0.05 was considered statistically significant.

Median survival was 4.0 months in patients treated with WBRT alone (n=72) and 10.5 months in those treated with additional radiosurgery or surgery (n=18). Regarding the prognostic factors in our patient population (Table 2), primary tumour control was not evaluated as almost all patients had controlled primaries. Number of brain metastases, extracranial metastases, hormone receptor status, N-stage and Nottingham prognostic index (NPI, based on primary tumour size, number of lymph node metastases and histological grade) (Galea et al., 1992) were not significant prognostic factors in univariate analyses. As shown in Figure 1, patients with NPI <3.4 might have longer survival, but only 10 patients had NPI <3.4. 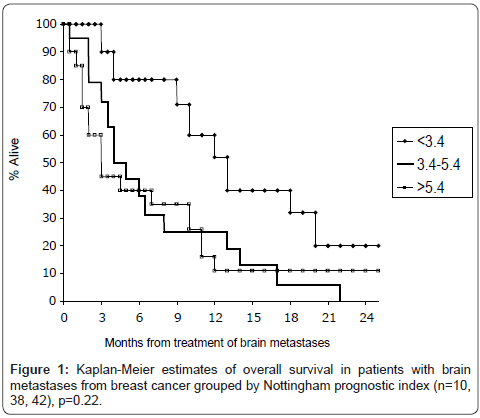 Patients with HER2 positive tumours survived longer than their HER2 negative counterparts (median 7 versus 4.6 months), but this difference was not significant either. Patients with triple-negative tumours had unfavourable outcome (median survival 3.9 months). Few patients belonged to RPA class I (KPS ≥70, age <65 years, controlled primary tumour, no extracranial metastases). Thus, analysis was limited to class III (KPS <70) and II (other patients). Patients in class II survived significantly longer than those in class III (median 7 versus 2 months, p<0.01). Few patients had G1 primary tumours. Thus, analysis was limited to G2 and G3 cases. Patients with G2 tumours survived significantly longer (median 5.5 versus 2.5 months, p=0.03). Regarding primary tumour size, patients with tumours <5 cm survived significantly longer than those with larger tumours (median 6.5 versus 2.5 months, p=0.03). There were 3 other statistically significant prognostic factors in univariate analyses. Longer survival was associated with higher KPS, younger age and longer interval from primary tumour diagnosis to brain metastases.

The present retrospective analysis attempts to expand our previous work by analysing additional parameters related to primary tumour stage and biology. In an ideal world, the number of patients would have been larger and detailed information on HER2 status and factors such as lymphopenia would have been available. However, we are not aware of previous studies that evaluated the potential impact of NPI on survival after treatment for brain metastases. Liu et al. (2009) have recently reported that NPI predicts survival in patients with metastatic breast cancer in a group of 135 patients with metastases at various sites. We found that patients with NPI <3.4 might have longer survival, but only 10 patients had NPI <3.4. Therefore, this issue needs to be addressed in larger databases.

Harputluoglu et al. (2008) reported that tumour stage, grade, hormone receptor status and HER2 status were not associated with survival (Table 3). In contrast, Altundag et al. (2007) found that one of these parameters, i.e. estrogen receptor status, significantly influenced survival in a quite large patient sample. The other studies summarized in Table 3 also provide quite contradictory results regarding the prognostic impact of HER2, estrogen and progesterone receptor status. Niwinska et al. (2009) evaluated tumor biology in a different manner. They reported significantly longer survival in patients with brain metastases from luminal breast cancer (15 months) compared to HER2 positive (9 months) and triple-negative (3.7 months). Our own results confirm the poor prognosis of triple-negative cases (median survival 3.9 months) and the survival figure of HER2 positive cases (median 7 months), but these results are derived from small subgroups.

Table 3: Prognostic impact (PI) of different tumour- and patient-related parameters in the literature.

Previous studies did not find time interval between initial diagnosis and brain metastases to be prognostically significant. However, it might be important to look at different cut-off values rather than dividing the population by median interval. Our own data suggest that survival improves particularly in patients with interval ≥36 months. It appears justified to evaluate this finding in larger databases. Two previous studies found that lymphopenia is an important and independent predictor of survival (Claude et al., 2005; Le Scodan et al., 2007). Lymphopenia has not been included in other analyses published so far and was not available in our patients either.

In conclusion, lymphopenia, breast cancer subtype and interval from primary tumour diagnosis to development of brain metastases are promising emerging prognostic factors, which have been reported in several retrospective studies. The challenge for the future is the validation of the current preliminary findings on tumour biology and other host factors in a head to head comparison with KPS, extracranial metastases (or number of sites or disease status as suggested by different studies listed in Table 3), number of brain metastases, interval and age. Such studies will eventually allow for increasingly individualised palliative approaches, which might contribute to prolonged survival and avoid unnecessary toxicity.