Copyright: © 2012 Asiri MA, et al. This is an open-access article distributed under the terms of the Creative Commons Attribution License, which permits unrestricted use, distribution, and reproduction in any medium, provided the original author and source are credited.

Background: Standard treatment for well differentiated thyroid cancer is surgery followed by adjuvant radioactive iodine-131 (RAI) therapy. To concentrate RAI in thyroid tissue, levothroxine therapy is withheld for 3-4 weeks prior to RAI therapy along with low iodine diet (LID), which results in short term hypothyroidism, which ultimately can result into mild to severe symptomatic hyponatremia with fatal complications. It is very rare complication; has been reported only in four case reports so far.

Case presentation: Here in we present a case report of 62 years Saudi, known hypertensive female on thiazide diuretic with diagnosis of papillary thyroid cancer (pT2N0M0), who was admitted for RAI therapy after total thyroidectomy. Patient was on low iodine diet for 3 weeks and she was given recombinant human thyrotropin (rhTSH) for two days prior to admission. On second day of admission (18 hours of RAI therapy), she was found confused, disoriented and was unable to recognise her family members. Blood chemistry showed low serum sodium concentration (105 mEq/L). Further investigations confirmed hypotonic hyponatremia and she was managed accordingly and she made full recovery within 48 hours of diagnosis.

Conclusion: Although low iodine diet related hyponatremia is rare complication, but consequences can be worse in patients undergoing RAI therapy, especially elderly patients who are on diuretics. Therefore, physicians should recognize this rare side effect for prompt intervention.

Standard treatment for well differentiated thyroid cancer is the surgery followed by adjuvant radioactive iodine I131 therapy (RAI) especially in high risk patients, approximately 6 weeks after the surgery [1]. In order to concentrate RAI into the residual thyroid tissue for successful ablation, withdrawal of levothyroxine for 3 to 4 weeks or use of recombinant human thyrotropin (rhTSH) is required in addition to low iodine diet (LID) as pretreatment for RAI therapy [2]. Withdrawal of levothyroxine and LID results in short term hypothyroidism, which can lead to the hyponatremia (serum sodium levels < 125 mEq/L) in such patients especially in elderly and those who are taking diuretics [3]. Although morbidity varies with severity of hyponatremia, life threatening complications such as brain edema and demyelination can arise from severe hyponatremia itself or from erroneous management [4]. Hypothyroidism related hyponatremia secondary to pretreatment of RAI therapy is very rare complication; only four case reports have been published so far [5-8].

A 62 year old Saudi female presented in our clinic with neck swelling. She had noticed this swelling for 8 months and it had been progressively increasing in size over months. Her previous medical history revealed hypertension and type II diabetes mellitus since last 9 years, for that she was taking 25 mg hydrochlorothiazide, 100 mg losartan daily and metformin 500 mg. She had no history of smoking and her weight was stable.

On physical examination, her vitals were stable. A fixed hard neck nodule of size 2 × 2 cm was palpable in the left thyroid lobe. There was no palpable cervical lymphadenopathy and examination of chest, heart, nervous system and abdomen was normal. Ultrasonography showed left lobe two relatively heterogeneous nodules, the largest one measures about 1.7 x 2.2 cm seen at the junction between the left lobe and the isthmus (Figure 1). 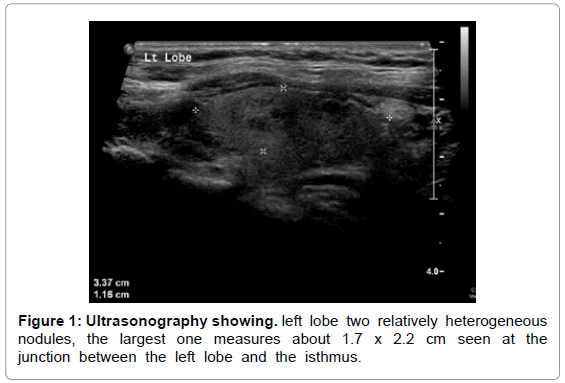 Figure 1: Ultrasonography showing. left lobe two relatively heterogeneous nodules, the largest one measures about 1.7 x 2.2 cm seen at the junction between the left lobe and the isthmus. 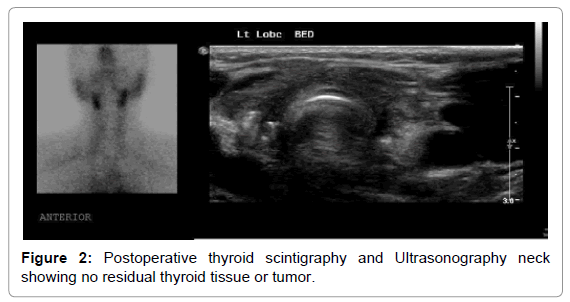 Two months after thyroidectomy, she was admitted for RAI ablation of dose 100 milliCurie (mCi) with 3 weeks pretreatment of LID, administration of two intramuscular injections of rhTSH 0.9 mg/ ml and withdrawal of diuretics prior to admission. At time of admission her electrolyte and renal profiles were within normal limits. Patient was given RAI dose 100 mCi in evening of admission.

Next day on D1 of RAI ablation at 18 hours, patient started feeling nauseating, disorientation and confusion. She was unable to recognize her daughter. Physical examination revealed a heart rate of 72/min, blood pressure 120/75 mmHg. She had no signs volume retention or fluid overload depletion. Magnetic resonance imaging of the brain and chest radiograph were normal. Serum chemistry showed severe hyponatremia (sodium105 mEq/L) along with hypomagnesaemia, hypocalcaemia and hypokalemia (Table 1). Urine osmolality was found higher than that of serum and hypothyroidism was also indicated. The functions of adrenal gland were normal. Fractional excretion (FE) of sodium, potassium and calcium were found reduced. It was established that severe hyponatremia secondary to low iodine diet was to be culprit for the confusion and disorientation.

Table 1: Laboratory findings of Patient at time of admission and subsequent days until time of full recovery.

Because the patient was at risk for brain edema and demyelination with overly rapid correction of the hyponatremia, a slow correction was done by administering 0.9% normal saline (1 L over 24 hours) on the first day, resuming a normal salt diet, and stopping excessive free water intake along with magnesium and potassium replacement. Initially, electrolytes were checked every 6 hours, then twice daily until she made a full recovery in 48 hours. Frequent mental status checks were done by nursing staff and physicians until she fully recovered. On following day of her full recovery, patient was sent to home and was seen in clinic after one week. She was well oriented and stable and her 7 day post-RAI ablation scan was found normal (Figure 3). Pretreatment before radioactive iodine therapy in patients with well differentiated thyroid cancer include, LID, thyroxin withdrawal or rhTSH injections, which may result in short term hypothyroidism and subsequent severe hyponatremia. It is very rare complication, reported only 8 patients so far (Table 2).The exact mechanism of LID related hyponatremia is not known, however following hypotheses have been suggested;

2. Hypothyroidism may be associated with a decrease in blood pressure secondary to diminished myocardial contractility and heart rate, which would be expected to activate baroreceptormediated, non-osmotic arginine vasopressin (AVP) release leading to dilutional hyponatremia [10].

3. Patients on low iodine diet restrict their sodium chloride intake despite the availability of iodine-free salt, which is also a contributory factor for hyponatremia [7].

Low iodine diet related hyponatremia has been more in elderly group of patients and with metastatic disease. It may occur with imbalance of other serum electrolytes as seen in our patient. Cause of associated hypokalemia is extra-renal, mostly associated with poor oral intake and vomiting. Associated hypocalcaemia in our patient can be explained by transient hypoparathyroidism after RAI therapy and hypophosphatemia can be explained by high phosphaturia in our patient [11,12,13].

Low iodine diet (LID) related severe hyponatremia is extremely rare complication, but can endanger the life of patient secondary to cerebral edema and demyelination. Physicians should carefully monitor patients who are on LID especially, the elderly, and diabetic and hypertensive patients. Frequent serum electrolytes measurements shall be considered for these patients while on LID.