Some Behavioral Traits of Red Neck Ostrich under Captive Conditions

Copyright: © 2012 Mohammed Ahmed FA, et al. This is an open-access article distributed under the terms of the Creative Commons Attribution License, which permits unrestricted use, distribution, and reproduction in any medium, provided the original author and source are credited.

Ostrich (Struthio camelus camelus) is the largest and heaviest living bird and is the only bird with just two toes and sole representatives of the order Struthioniformes [1]. Ostriches produce red meat that is very similar in taste and texture to veal and beef [2,3]. The meat has been reported to be of high protein, and low cholesterol than any other protein of animal origin [4]. With increasing incidences of human’s heart associated problems in developing countries such as Sudan, ostrich farming would be of importance not only in supplementing protein requirements of the growing population in the country, but also in providing abundant and cheaper supply of meat for people with specific nutritional requirements such as low cholesterol and low fat. Studies on behaviour are important for evaluation of the welfare of animals. Ostriches have not been selectively bred with the objective of minimising the effect of the stress experienced on farms.

The African ostrich is a social species; therefore it thrives better in groups [5]. Thus, providing conditions where the animals can express their normal behaviours is one of the basic requirements of good welfare. According to Newberry et al. [6], in the wild, pecking is a natural behaviour that leads to the establishment of a pecking order in the group. Mitchell [7] (quoted by Bertram [8]) published a list of 300 citations dealing with this species, but most of them were devoted to physiology, veterinary aspects, husbandry and marketing, while not involving behavior this was described in detail only in recent decades, firstly by Sauer and Sauer [9] and Bertram [8]. Even less attention has been paid to a detailed quantitative description of behaviours or behavioural patterns displayed by captive ostriches. In fact, most authors either considered gross daily temporal budgets for a few behaviours [10] or made more detailed behaviour descriptions in various contexts, but still in terms of just percentage of time [11,12]. As far as this study is concern of, there are no studies devoted to the analysis of behaviour in terms of the sequences of behaviour forming the whole behaviour repertoire. Recent increases in ostrich breeding, principally in South Africa and later in Israel and Europe, led to the necessity to learn more about its behaviour in restricted areas. The study of behaviour transitions helps understanding the sequences of behaviour. It is believed that analysis allows understanding the relationships among different behaviours and their relative importance more deeply than simply ascertaining the duration of each behaviour, considered separately from the others [13,14].

The objective of the research work was to study some behavioral traits of Red Neck Ostrich under captive conditions.

This study was carried out at the farm of College of Veterinary Medicine and Animal Production Sudan University of Science and Technology. Three individuals of Red neck 4-year old ostriches (S. c. camelus) two male and one female were included in the study. They had been living in unit for at least 3 years. The part of unit used for the study consisted of two rows of three identical outdoor paddocks, separated by an inspection corridor 4 meter wide. The paddocks were 60 m-41 m (1504 m2) in size and delimited by 4 m high wire mesh. Each paddock had a wooden shelter of about 8 m2 (three sides and roof), and contained a trough located at the middle of the paddock’s short side in front of the inspection corridor and a plastic water container (80 cm- 40 cm -45 cm) on the ground just outside the shelter. Two to five small trees (4-5 m high) were scattered in each paddock. The ground was natural, but the grass had been removed by ostrich locomotion and the ground became muddy after rains. Behavioural activities which were observed and recorded included: standing in the sun, standing in shade, laying in the shade, laying in the sun, staying in the cage, movement and sitting on the knees, feeding, drinking, quarrel, urination, defecation, ritual display, courtship, and preening. Simple statistical analysis was performed with the mean and standard deviation [15].

As shown in Figure 1, 2 and 3, the total observation duration for the three individuals as a whole was 240 hours. Males and females were recorded equally. Both sexes were mostly involved in similar activities, closed-wing walking and environment pecking. These behaviors took up 39.0% and 41.1% of time in males, respectively, and 40.4% and 43.1% in females, respectively. Walking, as a whole, plus running, as a whole, involved almost one half of observation time in both sexes (13.2%). Birds also spent 11.9% of time in standing in the sun, 1.6% in eating and 0.5% in raised-head resting. On the other hand, ostrich were involved for 25.9% of time in standing in the shade, 28.8% of time in laying in the shade and 5.3% of time in staying in the cage. 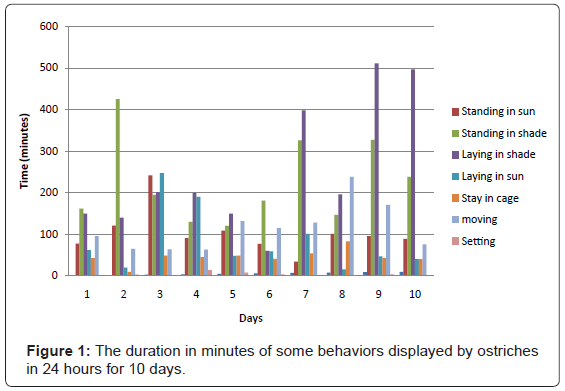 Figure 1: The duration in minutes of some behaviors displayed by ostriches in 24 hours for 10 days. 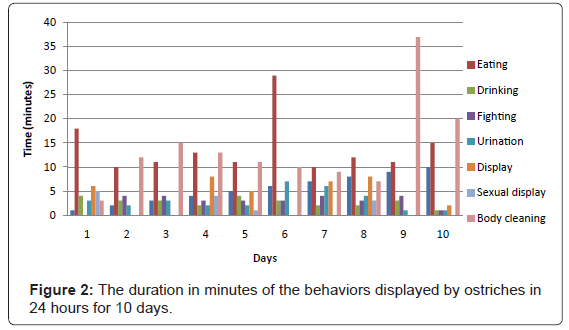 Figure 2: The duration in minutes of the behaviors displayed by ostriches in 24 hours for 10 days. 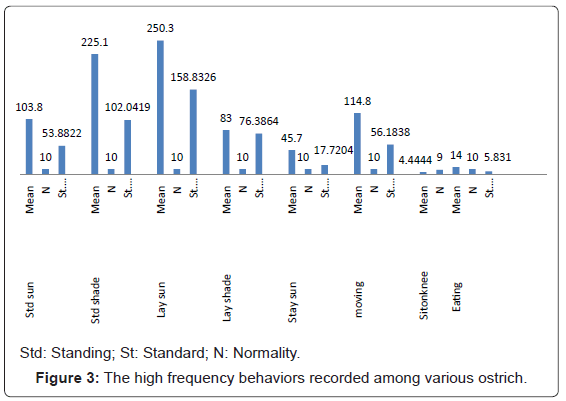 The proportion in the time-activity budgets displayed by the male and female ostriches are largely comparable with data recorded by others in both Europe [16-18] and South Africa [19]. This primarily concerns walking in general, comprising the several variations considered, but also other important behaviours such as standing and eating, the present study showed the same behaviour types dominating the activity budgets recorded by other authors. There are some discrepancies in the values, probably due to the different recording methodology used to record of the behaviour. Although sexual differences were beyond the aims of this work, marked sexual differences in percentage time-activity budgets do not seem to exist, as instead reported by McKeegan and Deeming [11] and Lambrechts et al. [19], but this might be due to the longitudinal nature of the present study, which could increase overall similarity of activity in both sexes. The great majority of the recorded behavioural transitions were oneway transitions in both sexes and age.

Both drinking and feeding were different to periods. According to Souza [20], ostriches in captivity and in hot weather conditions drink water at dawn and at dusk. During the trial period, there was a higher consumption of feed in the early hours of the day and during the afternoon, which coincides with the hours of lower environmental temperature, as well as the time when food is distributed. Nevertheless, higher temperatures from 11:00 a.m. to 3:00 p.m. may have led to a decrease in the food consumption to avoid caloric enhancement resulting from the digestion process. Sambraus [16] and Deeming [12] also found higher consumption of food during the morning when the food was supplied also McKeegan & Deeming [11], who observed pairs of adult ostriches in captivity, reported a peak in the consumption of feed in the morning for both sexes.

In the present study, temperature and food offered were confounded, therefore it was not possible to separate their effects. On the other hand, it is reported by Sauer & Sauer [9] that ostriches in natural environment spend most of the time walking and feeding during the day, including grazing and seeking other kinds of food. This probably relates exploratory behaviour with the aim of achieving the daily nutritional requirements. In this study, the ostriches at the hours close to noon, showed a calm behaviour. They spent more time standing in the early hours of the day. Deeming [12] found no diurnal variation in the frequency of this behaviour during the winter in captive ostriches. Similar results were found by Ross & Deeming [18], who studied the behaviour of ostriches during the summer. In this study, the birds were moving more in the early hours of the day and at the end of the afternoon, which is in accordance with the results found by McKeegan and Deeming [11], who reported greater expression of this behaviour in the morning and afternoon in captive male ostriches.

On conclusion this study displayed behaviours that changed during the day and even within one hour. More studies should be carried out to determine the real needs of this bird and to define the exact normal behavior under the ideal conditions.

Thanks and gratitude to the staff of Fisheries and Wildlife Science College of Animal Production for science and Technology, Sudan University.