I obtained a degree in Chemistry from Oxford, and a PhD in Biochemistry from London University. I acquired skills in protein science at UCLA in the 60’s, and an interest in brain peptides by working on endorphins at NIMR in the ‘70s. I started investigating the role of peptides and cellular protein mis-targeting in AD at St George’s in 1995, and found that raised cholesterol was a risk factor for -amyloid formation, and the small peptides were possible therapeutics.

-Amyloid peptides were isolated from plaques in post-mortem brains of Alzheimer’s patients some 40 years ago. Three types of evidence suggest they are causative in the cognitive loss of Alzheimer’s Disease (AD). (1) Mutations in the amyloid precursor gene (APP) and -secretase gene (PS1) responsible for its formation, are found in early-onset AD patients. These mutant gene expressed in transgenic mice give rise to memory defects. (2) The total amount of -amyloid in post-mortem brain correlates with the extent of cognition loss prior to death. (3) Aggregates of -amyloid proteins are toxic to neuronal cells in vitro and in vivo. In the last seven years, it has become clear that soluble oligomers of -amyloid block the synaptic plasticity required for memory formation and storage, whereas fibrils of insoluble -amyloid are relatively innocuous. Potential therapy against -amyloid has developed along two lines. First, vaccines against the peptide have been shown to clear amyloid plaques in patients, but have little effect on cognitive status. The suggestion is therefore, that therapy should be aimed at the formation of new oligomers of -amyloid, rather than clearance of mature fibril -amyloid in plaques. We have developed a number of retroinverted peptides that prevent formation of soluble amyloid oligomers, shown to prevent neurotoxicity to cells in culture. Some of these peptides have been converted into gadolinium-containing MRI contrast agents, and shown to be useful for -amyloid detection in the brains of 5xFAD transgenic mice. 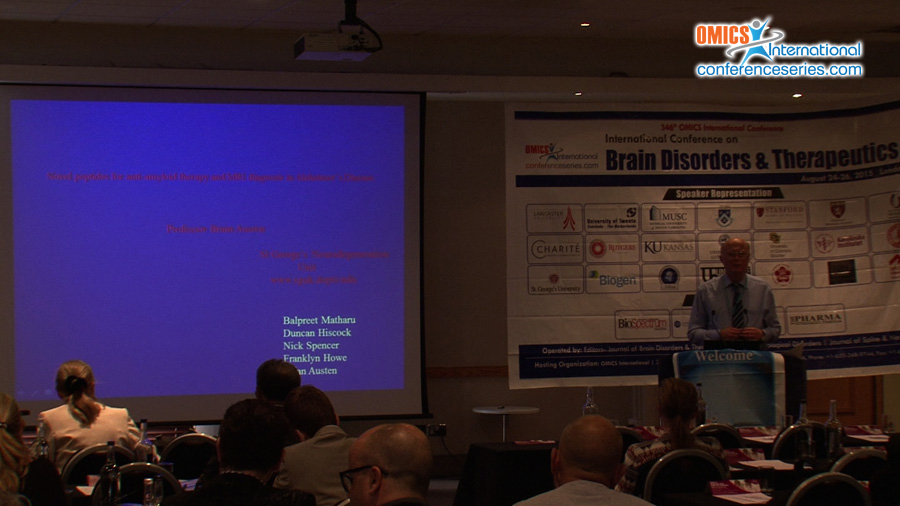