The University of Tokyo, Japan

Kazuki Morita took bachelor degree in 1983, master degree in 1985, and Doctor of Engineering in 1988 from the University of Tokyo at the Department of Metallurgy. He has his expertise in physical chemistry on high temperature materials processing mostly related to iron- and steelmaking, silicon refining, and materials recycling as a professor at the Department of Materials Engineering in the University of Tokyo. His reported thermodynamic data on impurities in molten silicon has clarified the validity of new metallurgical processes for solar grade silicon refining. In addition, he and his students pursued innovative processes for more effective silicon refining via new principle, one of which is widely known as a solvent refining process with a possibility of higher refining efficiency and lower processing temperature.

Solar power has been widely introduced as a renewable energy lately. Among others, silicon via a gasification-distillation method is yet the main feedstock for ordinary solar cells, but more economical production process with higher productivity has been strongly desired. As a new promising route for solar grade silicon (SOG-Si) production, metallurgical refining processes was developed in the early eighties of the last century, followed by the establishment of NEDO-JFE process in the beginning of the 2000s, where P was removed by electron beam (EB) in vacuum conditions and B by Ar-H2O plasma. In order to verify and optimize the process thermodynamic properties of noticeable impurities in molten silicon, such as P, B, Fe, Ti, Ca, Al and Mg, were clarified by our research group. Then, we have thermodynamically assessed the possibility of impurity removal by alternative processes, such as slag treatment and acid leaching. Furthermore, as an innovative process, we have introduced an alloying process for reducing the process temperature as well as the solubility limit of impurities in solidification refining. We developed the process from Si-Al melts and now being called “solvent refining process” and further developed also by several research groups. In recent years, we have investigated the possibility of B removal by Si-Sn solvent system and the combination with slag treatment seems to be the most effective process, whose B removal efficiency has never been attained before. Including other refining processes developed in our research group, the possibility of new metallurgical processes for solar cell silicon production will be reviewed from a physicochemical view point in the presentation. 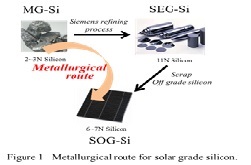