University of Twente, The Netherlands

Title: The role of amyloid beta peptide variability toward progress of Alzheimer disease

In 1993 Kerensa started her study nutrition and dietetics in Amsterdam. After finishing the bachelor in 1997, she continued with a master degree nutrition and food management at Huddersfield University in the UK. From 2000 until 2005 she worked as a PhD student at Wageningen University on the biophysics of unfolding, refolding and aggregation of food related proteins. Her first postdoctoral work was at the Medical Research Council – Laboratory of Molecular Biology in the Neurobiology department in Cambridge, UK. This work focused on fatty acid – a-synuclein interactions employing both biophysics and cell culture as research tools. Her second postdoc was at the Free University of Brussels (VUB) in Belgium where she started working on the role of amyloid beta peptide in Alzheimer’s disease. Here she also obtained an Odysseus grant from the Belgian government and, as a result of that, was offered a position as assistant professor. Kerensa moved to her current position as an assistant professor at the University of Twente in March 2011. She prefers to spend her spare time in the dojo doing karate, travelling, gardening or reading.

Soluble aggregated forms of the beta amyloid peptide (Aβ) have been shown to play an important role in the progress of Alzheimer disease. This extracellular residing peptide arises from cleavage of transmembrane amyloid precursor protein through cleavage by means of a combination of secretase enzymes. As a result of this enzymatic processing, genetic profile and further modifications, the amyloid beta peptide does not exist as a well-defined species but arises in a variety of truncated and modified forms. For example, it has been reported that, within any one individual, a range of amyloid beta peptides exist varying in length from 34 to 49 amino acids and that multiple otherwise modified forms of this peptide are present in a complex mixture. By simple mixing of various ratios of Aβ1-40 and Aβ1-42, the two most prominent forms of the peptide present in the brain, we have already shown that small shifts in the ratio between these two peptides can have significant impact on the aggregation reaction, cellular response and cognitive behavior in animal models (1,2). These shifts are of biological relevance as it has also been reported that the presence of longer and more aggregation-prone Aβ1-42 slightly rises in patients with Alzheimer disease, sometimes at the cost of Aβ1-40 production. We extended our observations by also including Aβ1-38 and Aβ1-43 into the equation and found that inclusion of these peptides can alter the toxic profile of these peptides (3). Further investigations into disease-related mutations related to deposition of the peptide into the vascular system showed that fibrillar structures of the peptide assume a structure that deviates from the wild type morphology of which the contribution to disease have yet to be determined (4). From these examples and other investigations into this topic we concluded that the complexity of the amyloid beta peptide mixture should be acknowledged upon investigating the contribution of this peptide toward disease and development of potential therapeutic developments. During my talk, I will provide an overview of our recent work on complex amyloid beta peptide mixtures and their potential contribution toward progress of Alzheimer disease. 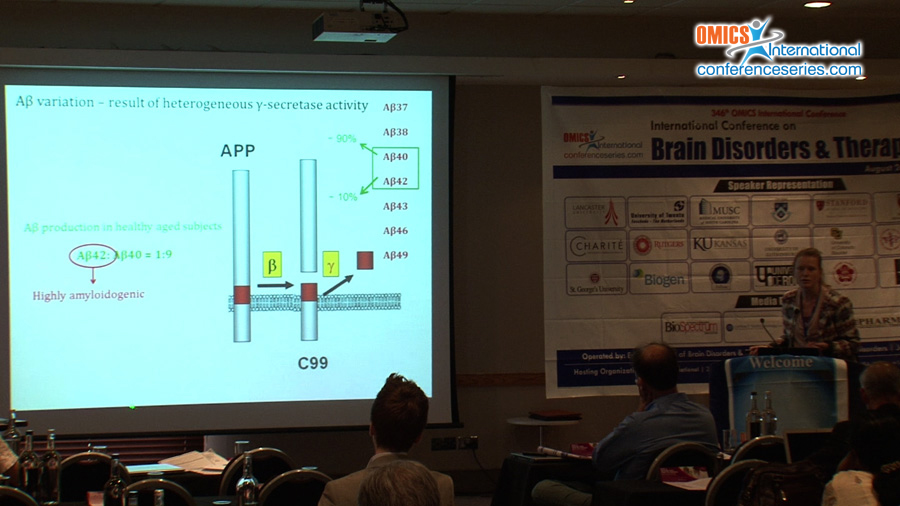