Michele Mishto is a postdoc since 2005. He is currently working in the group of Peter Kloetzel (Institut für Biochemie, Charité Berlin). His main interests are proteasome isoforms functions with outcomes on: (i) neuroinflammation and its involvement in neurological diseases such as AD, MS and epilepsy; (ii) tumors; (iii) antigen presentation and immune response. He has 31 publications in peer-reviewed international journals (15 as first or last author) and H-index = 16.

The proteasome is the core of the ubiquitin proteasome system and is involved in several cellular metabolisms. The incorporation of three inducible immuno-subunits into the proteasome results in the generation of the so-called immunoproteasome, which is endowed of pathophysiological functions related to immunity and inflammation. We have shown that immunoproteasome is almost absent in healthy human brain, while it is induced in the patients affected by Alzheimer disease (AD), multiple sclerosis (MS) and temporal lobe epilepsy (TLE). The expression of immunoproteasome in the brain can affect the microglia activity in AD model, the neuronal activity in TLE animal models and the presentation of myelin antigens involved in MS. Immunoproteasome can affect the neuroinflammation by acting not only as intracellular but also as extracellular protease. Indeed, we show that extracellular proteasome seems to be involved in the regulation of the pleiotropic cytokine osteopontin, thereby playing a role in the development of relapse in RRMS patients. Recent studies on animal models identified immunoproteasome subunits as potential targets for treatment of MS and pharmaco-resistant epilepsy forms. 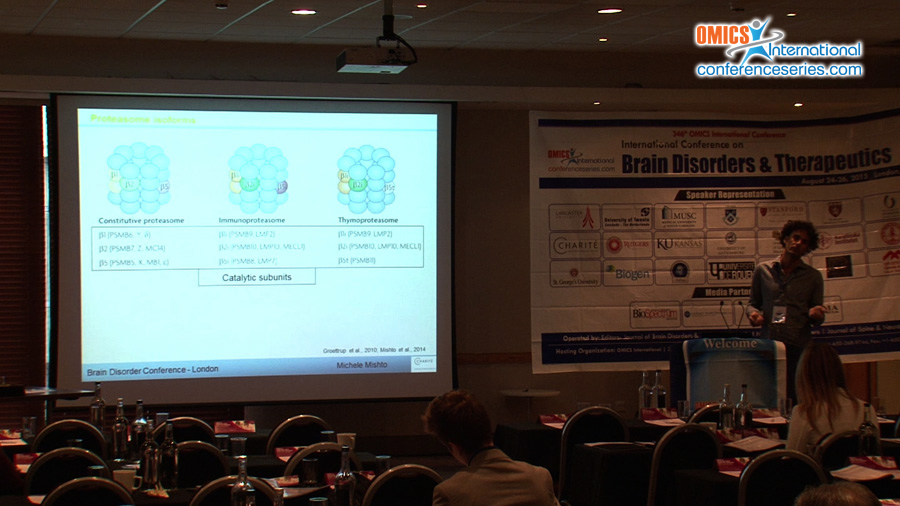