Lignin is one of the natural resources contained in coniferous trees up to 30% in weight, but it has not been utilized as a useful material up to now in contrast to the wide application of celluloses. Recently Dr. Yamada has invented “glycollignin”, which is soluble materials directly derived from coniferous tree chips by the solvolysis with oligo-ethylene glycol. We have developed hybrid film materials with the glycol-lignin and clays which have excellent properties such as insulation, gas barrier, surge resistance and so on as well as thermal stability, and which are now applied as gasket packings FRP matrices and so on. In order to improve the film properties and processability of the glycol lignin, we prepared several derivatives of the glycol-lignin. Phenolic hydroxyl groups and the hydroxyl groups of ethylene glycol chains on the glycol-lignin were determined as 1.89mmol/g and 2.35mmol/g, respectively based on the acetylation method. Then several functional groups such as diisocyanates, dianhydrids, chlorides, epoxides and so on were introduced on the active hydroxyl moieties to the materials. Introduction of (di)anhydrides afford the material water-solubility which improved the fabrication process so much. Addition of diisocianates gave water-containing-elastic gelly materials. Thus chemical modification of the glycol-lignin has opened a door to the wide application of the materials from the view point of sustainable engineering. 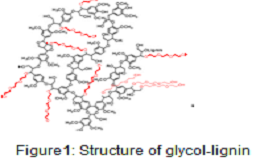