Satoshi Hotta is a Graduate School Student in Akita University. He is engaged in measurement for pressure drop characteristics in model channels of plate-type heat exchangers. The plate-type heat exchanger is used especially in a field of Ocean Thermal Energy Conversion (OTEC) system to generate power from natural resources. To achieve the development of high efficiency for the OTEC power plant, he collaborates stuffs in Institute Ocean Energy, Saga University, which is a core institute for OTEC in Japan.

Heat transfer technology works in various aspects such as industrial products. Especially for the plate type heat exchanger, it is highly valued in terms of high thermal efficiency and compact size, etc. It is thought that the application range of the plate type heat exchanger will further widen in the future. For this heat exchanger, a method of disturbing flow using a disturbance promoter is attracting attention as a method for increasing thermal efficiency. In this study, consider the trapezoidal groove in the disturbance promoter, and consider its performance. The visualization of the disturbance promoter in the trapezoidal groove is shown in Figure 1. The feature of this promoter is that a vortex is generated in the groove. This feature doesn’t have smooth disturbance promoter. Two things need to be considered in evaluating the disturbance promoter; first, about heat transfer, the second, about energy loss. In this study, we consider energy loss in the channel. The energy loss can be expressed by the difference in pressure drop between the two points by Bernoulli theorem. Therefore, in this study energy loss is considered by measuring pressure loss. The experiment apparatus is shown in Figure 2. The flow rate was adjusted with a valve, and the pressure drop when a constant flow rate was passed was measured. The plate pattern of the disturbance promoter was measured for 6 patterns as shown in Figure 3. As a result, it was found that there is a critical point at which the loss significantly increases in any pattern. This is a phenomenon that is expected to change the turbulent flow from laminar flow to turbulent flow. It was also found that the critical point was affected with respect to the edge part with respect to the flow direction. 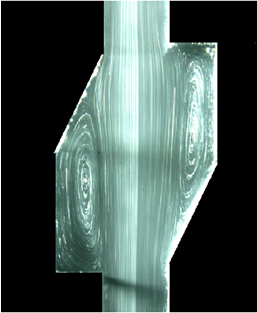 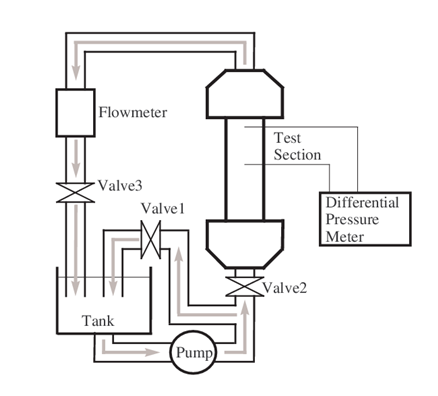 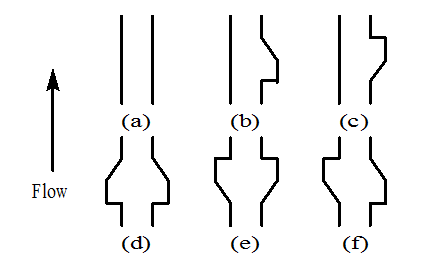 2.T Adachi and S Hasegawa (2006) Transition of the flow in a symmetric channel with periodically expanded grooves. Chemical Engineering Science, 61:2721-2729.