Title: Distribution and biliary excretion of tetrodotoxin in the marine pufferfish Takifugu rubripes juvenile after an intramuscular administration

Takuya Matsumoto has completed his Ph.D.from Tokyo University of Marine Science and Technology (TUMSAT) in 2008 and postdoctoral studies from TUMSAT in 2010 and Graduate School of Agricultural and Life Sciences, The University of Tokyo in 2012.He is now Assistant professor at Faculty of Life and Environmental Sciences, Prefectural University of Hiroshima.He has conducted a series of studies about pharmacokinetics of marine pufferfish toxin, and published more than 17 papers in journals related to the field of toxinology and marine biochemistry.

Pufferfish, the family Tetraodontidae, generally contain a potent neurotoxin, tetrodotoxin (TTX) that selectively binds to voltage-gated sodium channels in muscle and nerve tissues. Pufferfish mainly acquire the toxin through the food chain associated with biological concentration.In wild adult pufferfish, TTX mainly localized in high levels in the liver and ovary, although the distribution and accumulation of TTX is species-specific.We previously examined the pharmacokinetics of TTX in pufferfish Takifugu rubripes adults following single intravenous and gastrointestinal administration, and observed thatTTX was well absorbed into the systemic circulation from the gastrointestinal tractandtransferred into the liver. In this study,we investigated the tissue distribution and biliary excretion of TTX inpufferfish T. rubripes juveniles (6-month-old) for 24 h after intramuscular administration. The blood concentration of TTX was 0.53±0.15 mg/mL at 1 h, and gradually decreased to 0.05±0.01 mg/mL at 24 h after administration. The TTX concentration in the liver declined from 1.59 ± 0.10 mg/g at 1 h to 0.48±0.21 mg/g at 24 h. In contrast, the concentration of TTX in the gallbladder bile remarkably increased from 0.08±0.03 mg/mL at 1 h to 0.39±0.05 mg/mL at 8 hand remained at almost the same level at 24 h. These findings indicate that juveniles may have less ability to accumulate TTX inliver or greater ability to excrete the toxin fromliver, while adults have greater ability to accumulate more TTX in liver or less ability to excrete TTX. 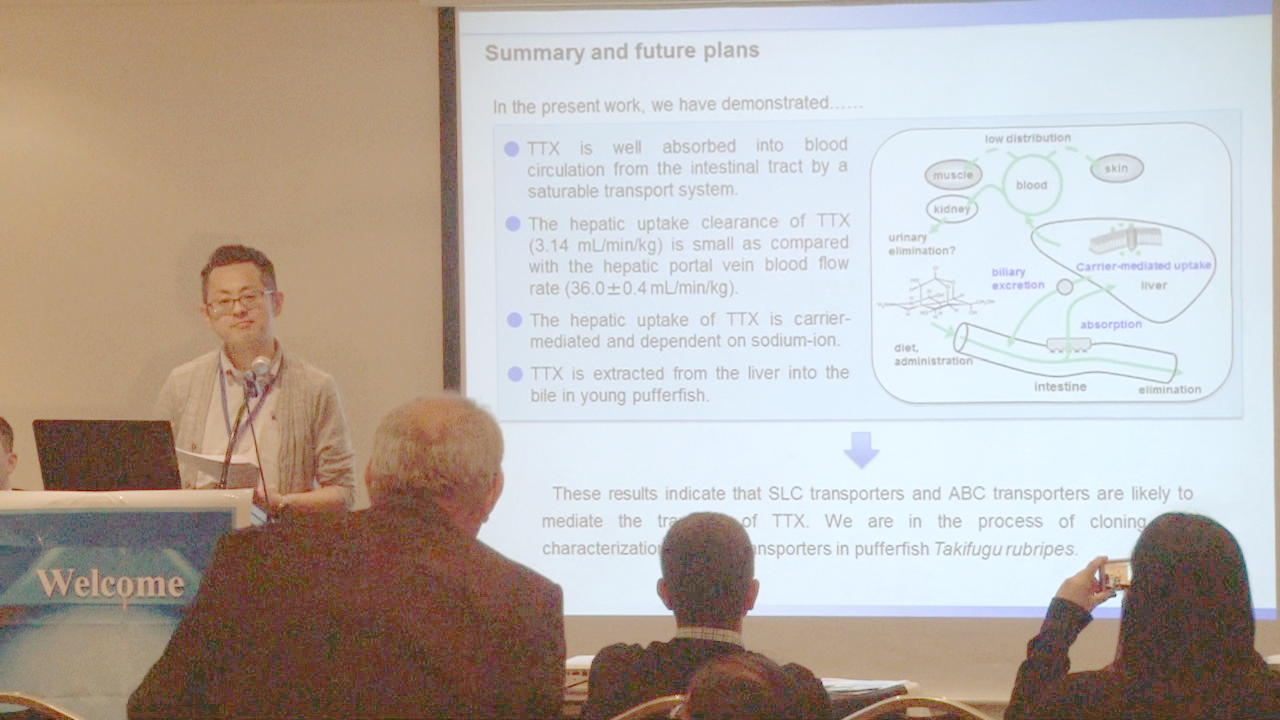