Yasuo Norikane has received his PhD in 2001 from University of Tsukuba, Japan, for investigating the photochemistry of intramolecularly hydrogen-bonded molecules, under the supervision of Professor Tatsuo Arai. From 2001-2003, he carried out his Postdoctoral research on novel crystal structure and photo-isomerization in macrocyclic azobenzenes with Dr. Nobuyuki Tamaoki at AIST. After serving as a second Post-doctorate with Professor M. Reza Ghadiri at the Scripps Research Institute, he began his carrier as a Researcher in AIST. He was awarded a Commendation for Science and Technology by The Minister of Education, Culture, Sports, Science and Technology, Japan. He is currently a Group Leader at Electronics and Photonics Research Institute and an Associate Professor at Department of Chemistry, University of Tsukuba. His research focuses on organic photochemistry especially in design and synthesis of photofunctional materials using photochromic compounds such as azobenzene.

Creating self-propelled motion in nano- to macroscopic sized objects has been of interest to scientists. Physical or chemical energy has been used to obtain motion of liquid droplets or solid objects in various media. Using light as an energy source, photochromic molecules have been utilized to induce various mechanical motions of objects. In many cases, the mechanical motions involve the photochemical reactions of azobenzene molecules, which exhibit photoisomerization between trans and cis isomers. So far, various type of motion has been reported; however, photo-induced translational motion of crystals on solid surfaces is unknown. Recently, we have been interested in photochemically-induced phase transitions between solid and liquid phases in photochromic organic compounds such as macrocyclic or rod-shaped azobenzene derivatives. Materials’ showing the phase transition has been of interest because of its interesting properties such as photocontrollable adhesives, photoresists and motion on water surface. Here, we report the novel crawling motion of crystals of simple azobenzenes such as azobenzene and 3,3'- dimethylazobenzene on a glass surface. The motion is directional and continuous when irradiated simultaneously with two different wavelengths (365 and 465 nm). Our method is simple as crystals move on a bare glass surface using a light-emitting diodes or Hg lamp as light sources in a fixed position. The direction of the motion can be controlled by the position of the light sources and the crystals can even climb vertical surfaces. The motion proceeds without changing the crystal orientation, despite the large deformation of the crystal shape. There is a no need for any special treatment such as chemical modification, spatial gradient or application of ratchet potential of the solid surface. It is presumed that the motion is driven by crystallization and melting at the front and rear edges of the crystal, respectively, via photochemical conversion between the crystal and liquid phases induced by the trans-cis isomerization of azobenzenes 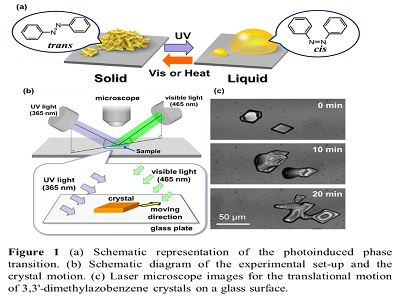