Ying Liu has obtianed her BS in Engineering Mechanics from Tsinghua University in 2001 and her PhD in Chemical Engineering from Princeton University in 2007. She is a tenured Associate Professor at the University of Illinois at Chicago. Her research group is interested in understanding the competitive kinetics during material self assembly. She has developed a scalable, reproducible process to generate drug-delivery nanoparticles, based on comprehensive understanding of the competitive kinetics and molecular dynamics during nanoprecipitation.

One of the biggest advantages of polymeric nanoparticles is the increase in solubility of hydrophobic compounds that they facilitate. Nearly 40% of all pharmaceutical compounds on the market (such as paclitaxel, rifampicin, digoxin and estrone) and 90% of newly developed compounds are hydrophobic and therefore diffi cult to deliver and maintain at suffi cient bioavailability. Drugs requires toxic solvents and surfactants such as Cremophor and Tween, which oft en impair drug distribution and are associated with severe side eff ects. Nanomedicines, which do not require the use of toxic solvents, off er clear advantages. However, in over more than two decades, very few nanomedicines have been successfully developed and approved for clinical use. Th ose already on the market are either liposome based (such as Doxil® and Myocet®) or a protein-drug complex (such as Abraxane®). Although biodegradable and biocompatible polymers have signifi cant advantages over liposome and protein delivery vehicles, such as better stability and robust molecular structure, polymeric nanoparticles have not been used beyond animal tests. 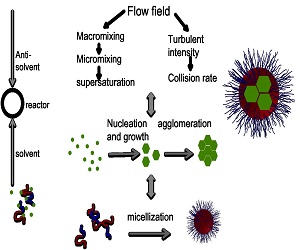 The major diffi culty is to completely control the physicochemical properties of the nanoparticles especially producing them in a large quantity. Th e Liu research group has developed a process of manipulating non-equilibrium structures of the polymeric nanoparticles via kinetic control by a sophisticated combination of mixing and spray drying. The Liu research group combined experimental and simulation tools to elucidate the selfassembly kinetics of polymeric micelles that control pharmaceutical nanoparticle physicochemical properties at multiple time scale
form 100 ns to 10 s.