Copyright: © 2011 Israr MQ, et al. This is an open-access article distributed under the terms of the Creative Commons Attribution License, which permits unrestricted use, distribution, and reproduction in any medium, provided the original author and source are credited.

The potentiometric cholesterol biosensor based on graphene nanosheets has been successfully miniaturized. Homogeneous exfoliation of the mono- and double-layered graphene nanosheets on copper wire is achieved by drop casting the graphene nanosheets suspended in N-methyl-pyrrolidone solution. The process of physical adsorption has been utilized to immobilize the cholesterol oxidase onto graphene nanosheets. Morphological, crosssectional and structural crystallinity of the nanosheets have been investigated using atomic force microscope and transmission electron microscope. Ultraviolet-visible absorption and Fourier transform infrared spectrometers have been used to confirm the presence of the graphene nanosheets and their conjugation with cholesterol oxidase. The presented potentiometric biosensor renders effective selectivity and sensitivity (~82 mV/decade) for the detection of cholesterol biomolecules in 1 × 10−6 M to 1 × 10−3 M logarithmic range and quick output response within ~ 4 sec. The stability and reusability of the biosensor have also been investigated for the above mentioned range of cholesterol concentrations. Additionally, the functioning of presented biosensor is studied for the ranges of the temperature of 15-70 °C and pH values (4-9).

PGraphene nanomaterials have engrossed tremendous attentions not only in the field of basic research but also in technological applications owing to its unique physicochemical dimensions such as, good sensing ability, excellent mechanical, thermal and electrical properties [1-5]. Development of the biosensors can potentially be an interesting application of graphene nanosheets in order to utilize their tremendously large surface area to volume ratio as a dominating and promising parameter [6,7]. The unique thin structure of graphene nanosheets with an excellent capability for the rapid signal communication further endorses their potential for such practical applications. Among the diverse analytical procedures for the detection of bio-molecules, an enzymatic electrochemical biosensing technique has been aroused as an important alternative to the non-enzymatic biosensing technique which generally requires expert manpower, costly chemicals and longer duration for the execution of the experiments. Preparation of enzymatic biosensors could be achieved through the immobilization of diverse types of enzymes onto the biocompatible matrices depending on the target molecules. The encapsulation of the surface of matrix by the bio-molecules ensures the stability, rapid charge-signaling communication and quick electrochemical response among target molecules and the matrix.

Cholesterol holds a significant character and crucial functioning in a number of biomolecules present in the animal cells [8,9]. However, the controlled level of the cholesterol in the blood is a highly important parameter for the prevalence of the major life threatening diseases [10- 12]. This is a strong motivation towards the fabrication of robust, facile, cheap and invasive cholesterol biosensors possessing good sensitivity, electrical conductivity and thermal stability which could be exploited for the clinical routine diagnosis of cholesterol concentrations. The incorporation of the biocompatible surface of graphene nanosheets with enzyme utilizing cholesterol as substrate could lead to the development of miniaturized biosensing devices that could generate extremely useful micro-environment for the detection of cholesterol molecules. However, the development of a comprehensive and optimized electrochemi- cal cholesterol biosensor possessing good sensitivity along with a stable output response is still a long term challenge. Here, we present a facile manner for the miniaturization of a cholesterol biosensor through the conjugation of graphene nanosheets and cholesterol oxidase. Highly stable output response has been extracted along with good linear sensitivity curve over a large dynamic range from 1 × 10−6 M to 1 × 10−3 M at neutral working pH value. Additionally, the biosensor not only reveals excellent reproducibility and repeatability at room temperature but also demonstrates good shelf life while storing in appropriate environmental conditions, providing a firm ground to its potential for practical applications.

Cholesterol powder (sigma), triton X-100 (Sigma Aldrich) and phosphate buffered saline tablet (Medicago) have been purchased and utilized for the preparation of solutions for measurements. Cholesterol oxidase (Sigma Aldrich) is used after further dilution with tris–HCl buffer solution (1 × 10−2 M) with the concentration of 500 U/ml. Homogeneous dispersion of graphene nanosheets (~0.4 mg/ml) has been obtained in N-methyl-pyrrolidone (NMP) throught mild sonication for 180 hours and centrifugation at 700 rpm for 2 h [13,14]. This suspension has been poured onto a copper wire (d= 0.25 mm) on glass fiber filter and evaporation of the organic solvent has been carried out using a fan heater. This copper wire has been utilized to establish the connec tion for the extraction of voltage signals for the calibration curve. Thus, a simplistic approach of drop wise dispersion of graphene suspended NMP solution has been utilized to scatter the graphene nanosheets on the copper wire. The extended sonication time results in a good fraction of monolayer sheets (Figure 1a) but with smaller lateral size. Preparation of the potentiometric cholesterol biosensor has been finalized by encapsulation of the cholesterol oxidase onto copper wire containing graphene nanosheets under the process of physical adsorption. Considering the insoluble nature of the cholesterol powder in water, preprepared stock solution in phosphate buffered solution containing 1% of triton X-100 has been used as solvent to dissolve the cholesterol powder in order to prepare the cholesterol electrolyte solutions with the concentrations ranging from 1 × 10−6 M to 1 × 10−3 M. The presence and thin lateral surface morphology of graphene nanosheets have been verified primarily by atomic force microscopy (AFM) after drop casting them on a relatively flat SiO2/Si substrate. Cross-sectional thickness of the nanosheets has been observed in the range from slightly less than 1nm up to few nm but long sonication time (180 h) results in a decent fraction of monolayer sheets but with smaller lateral sizes as shown in Figure 1a. Nanosheets having the crosssectional height of ~1 nm, ~1.5 nm and ~2 nm are generally assigned to the single, double and triple layered graphene nanosheets, respectively [14-16]. Monolayer graphene is assumed to be ~1 nm which could be probably due to different attraction forces between AFM tips and graphene as compared to the substrate and/or imperfect interface between the graphene and the substrate. The sample preparation for the transmission electron microscopy (TEM) is an imperative way in order to get enough material on the sample holder which has been achieved through the simple drop casting of the graphene nanosheets suspended solution onto the holey carbon grid. A fan heater is utilized to dry the holey carbon grid containing graphene nanosheets. The bright-field low resolution TEM results corroborate with AFM measurements, depicting thin lateral dimensions of graphene nanosheets from its transparent image, Figure 1b; selected area electron diffraction (SAED) pattern re-veals the good crystalline quality of graphene nanosheets with a regular arrangement of hexagonal atomic packing of carbon, insert of Figure 1b. High resolution TEM illustrates crystal growth orientation of the graphene nanosheets with distinct layers of the carbon, Figure 1c. Additionally, the calculated diffraction intensity ratio corroborates with the previously reported results related to mono-layer graphene nanosheets [16].

Fourier transform infrared (FTIR) spectroscopic measurements have been executed on as-synthesized graphene and conjugated graphene nanosheets with cholesterol oxidase, shown in Figure 2a. An infrared reflection-absorption spectroscopy (IRAS) setup was used, where the angle of incidence was ~82°. Aluminum films on Si substrates have been used as substrates for the above-mentioned samples and used as a reference. The double peak around 2350 cm-1 is due to residual CO2< in the measurement chamber and can appear as both positive and negative depending on the measurement procedure. The FTIR spectrum of as-grown graphene nanosheets has a prominent peak in the region 1600-1700 cm-1 with the centre at ~1678 cm-1 which could be assigned to the ring vibration of the whole carbon skeleton [17,18]. The two absorption bands at 1549 and 1411 cm-1 can be attributed to the asymmetric and symmetric stretching vibrations, respectively, of carboxylate groups COO¯, attached to the graphene nanosheets [19,20]. In addition, the existence of the small shoulder at 1721 cm-1 can be related to the C=O stretching of carboxylic species. The peak at ~2918 cm-1 corresponds to the CH stretching vibrations while the broad feature around 3244 cm-1 can be attributed to O-H stretching vibrations of COOH and adsorbed H2O. Taken together, these vibrations provide an evidence of the successful exfoliation of graphene sheets. In the spectrum of the conjugated graphene nanosheets with cholesterol oxidase, we observe that the peaks at 1549 and 1405 cm-1 have been increased in intensity provid ing evidence for a higher density of carboxylic groups [20]. Two significant peaks at 1666 and 1549 cm-1 correspond well to the amide I and II bands of proteins and peak at ~1452 cm-1 can be ascribed to C=C stretching. The peaks between 2850 and 3000 cm-1 correspond to CH stretching vibrations, whereas the broad peak at 3282 cm-1 is assigned to OH stretching vibrations [21,22]. Taken together, all these features support the successful conjunction of graphene nanosheets with cholesterol oxidase. 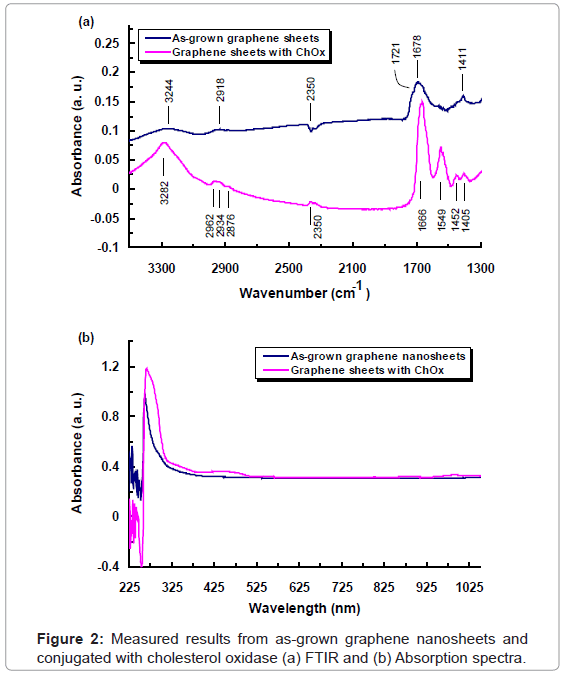 Figure 2: Measured results from as-grown graphene nanosheets and conjugated with cholesterol oxidase (a) FTIR and (b) Absorption spectra.

A schematic sketch in Figure 3a provides a clear understanding about all the constituents and their sequential arrangements for the miniaturization of the proposed potentiometric cholesterol biosensor. Additionally, the possible mechanism of the chemical reaction in the surrounding surface of the conjugated graphene sheets can also be seen. However, the conventional experimental setup for two electrode system, a working electrode containing graphene matrix and a reference electrode, shown in Figure 3b is used for electrochemical measurements. Figure 3: Schematic sketches of (a) the arrangement of the constituents of the potentiometric cholesterol biosensor and (b) experimental setup of two electrode system. (c) Calibration curve for different cholesterol concentrations.

According to the literature [26-28], cholesterol oxidase, exhibits excellent specificities for steroid during chemical modification with an essential requirement of the presence of a 3β-hydroxyl group, holds a bi-functional role in the reaction mechanism among cholesterol assay and matrix where it is assumed to be work as catalyst and responsible for initialization of reaction through oxidation of cholesterol molecules into Δ5-3-ketosteroid as product along with hydrogen peroxide as first step (Equation 1).

However, the unstable nature of Δ5-3-ketosteroid leads to an immediate process of the isomerisation to produce a stable Δ4-3-ketosteroid as a result of an intra-molecular shift of protons from the 4β to 6β arrangement [29] (Equation 2). 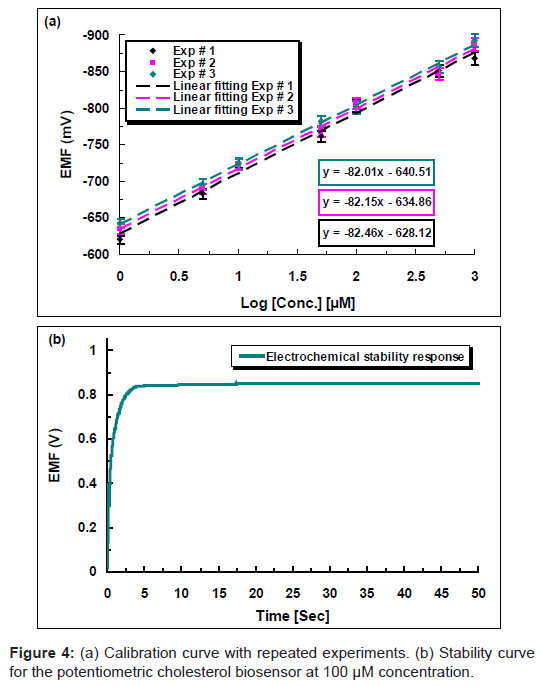 Figure 4: (a) Calibration curve with repeated experiments. (b) Stability curve for the potentiometric cholesterol biosensor at 100 μM concentration. Figure 5: (a) EMF calibration curves at (a) different pH values of phosphate buffer solution with 100 μM concentration and (b) different ambient temperatures ranging from 15 to 70˚C.

In conclusion, graphene nanosheets have been successfully exfoliated onto thin copper wire and exploited for the miniaturization of the potentiometric cholesterol biosensor through physical adsorption in order to conjugate with cholesterol oxidase. The morphological aspects and crystalline quality of graphene nanosheets have been studied through AFM and TEM measurements. The UV-Vis and FTIR spectroscopies have been utilized to study the pre- and post-conjugated surfaces of graphene nanosheets. The presented potentiometric cholesterol biosensor reveals good reproducibility, reusability and selectivity along with high sensitivity of ~82 mV/decade over a wide logarithmic range of cholesterol concentrations ranging from 1 × 10−6 M to 1 × 10−3 M. Additionally, the biosensor exhibits an excellent output stability with a response time of ~4 sec and relatively long shelf life has been attained.

The authors acknowledge Higher Education Commission, Pakistan for providing financial support for this project and we are also thankful to Mr. Salah Salman for his help in the laboratory of Acromed Invest AB, Lund, Sweden.