Copyright: © 2010 Singh D, et al. This is an open-access article distributed under the terms of the Creative Commons Attribution License, which permits unrestricted use, distribution and reproduction in any medium, provided the original author and source are credited.

The blow fly larvae leave the food source after reaching maturity, and begin to disperse in order to fi nd suitable places for pupariation, a process commonly called postfeeding larval dispersal. Some important aspects of this process were studied by allowing the postfeeding larvae of Chrysomya megacephala (Fabricius) and Chrysomya rufi facies (Macquart) to disperse from the center of a circular arena. The arena was divided into 4 circles starting from the center in order to determine the location of each pupa. The relationship between distance from the center and the weight of each pupa was evaluated statistically. It was observed that the lighter larvae tend to move longer distances. The greatest concentration of pupae was found in distances lesser than 100 cm in both the species though it was more evident in case of C. rufi facies. The study of this dispersal process can be important while estimating the minimum postmortem
interval (PMI) of human cadavers during forensic investigations.

Larval dispersal is an important process during the life cycle of blow flies when the larvae leave their food substrate and search for a suitable place to pupariate [1,2]. The postfeeding larval stage is normally an irreversible condition when the fully grown third instar larvae stop feeding and give no response towards food. There are several case reports about the use of postfeeding larvae as forensic evidence [3-6]. The larvae may be at risk of predation, parasitization and desiccation during this stage [7]. Godoy et al. [2] and Boldrini et al. [8] investigated experimentally and theoretically the dispersal of postfeeding larvae of C. megacephala, C. putoria and Cochliomyia macellaria in an earlier study and found that most larvae pupariated close to the food source.

The substrates in which immature stages of blow flies develop are discrete and ephemeral [9,10] and are normally saturated with insects of one or more species. There is often an intense competition for resources [11] which influences the larval behavior. The larvae attempt to feed as much as possible before the complete exhaustion of resources [1,12,13] and start searching for a pupariation site or for another source of food, if they are not mature enough for pupariation. Experimental studies on blow fly larval dispersal have already been done [14,15] and models have been developed on dispersal restricted to one direction based on diffusion equations [16], on statistical analysis of spatial distribution [2] and on non-local interactions [8]. Greenberg [14] compared the dispersal behavior of postfeeding larvae for five species of Calliphoridae and one muscid in 8.1-m-long channels. The results suggested that larvae of Calliphorinae moved farther from the food source, pupariated underground, and produced a thinner puparium as compared to the larvae of Chrysomyinae. The distance to which postfeeding larvae of particular species travel from a corpse is important information for an investigator at the site of corpse who needs to determine if postfeeding larvae are present and where to look for them. In addition, if one wave of blow fly infestation has occurred and the postfeeding larvae have dispersed and are overlooked, the postmortem interval will be incorrectly determined [14]. Similarly, the possibility that postfeeding larvae in the area of the corpse can be from a different carrion source, such as another corpse or an animal carcass, need to be evaluated and the larvae excluded if they are not relevant to the analysis of the corpse being studied.

Colonies of C. megacephala and C. rufifacies were maintained at room temperature of 27±2°C, relative humidity of 70-80% and photoperiods of 12 h light and 12 h dark. When the larvae of a particular egg batch were fully developed, the jar containing 150 to 200 such larvae along with meat was inverted at the center of a circular arena of 4 m radius established under natural conditions i.e. in the Botanic Garden of Punjabi University, Patiala. Distances between 0 to 100 cm, 101 to 200 cm, 201 to 300 cm and 301 to 400 cm from the center of the arena correspond to circles I, II, III and IV respectively. Majority of the pupae were located from the surface of soil while few were collected from a depth less than 1 cm. The distance of each pupariation site from the centre was measured in centimeters with rulers and measuring tapes. The pupae were kept individually in plastic flasks and weighed on an electric balance. They were grouped into three categories according to weight i.e. large pupae weighed more than 37 mg for C. megacephala and more than 38 mg for C. rufifacies, medium pupae weighed between 33 to 37 mg for C. megacephala and between 34 to 38 mg for C. rufifacies and small pupae weighed less than 33 mg for C. megacephala and less than 34 mg for C. rufifacies. The experiment was repeated five times and the averages taken.

Table 1: Distance travelled by larvae and weight of pupae (average with standard deviation) of Chrysomya megacephala and Chrysomya rufi facies in four circles of the arena.

It is obvious from the data that the lighter larvae tend to move longer distances. Larval movement takes place mainly to find a suitable pupariation site, even though the possibility that some larvae were searching for an additional source of food cannot be discarded [17]. Circle I was preferred by both the species. In other experiments where larvae of C. megacephala and C. albiceps distributed in a quadrant, 31.17% preferred quadrant I and only 15.25% went to quadrant II [18]. Greenberg [14] identified three patterns of larvae dispersal. The larvae of Lucilia sericata and Calliphora vicina were the most dispersive; <1% of the former and only 15.5% of the latter remained at the food source. The larvae of Phormia regina, C. rufifacies and Muscina stabulans dispersed the least; 98% of P. regina, 90% of M. stabulans, and 84% of C. rufifacies remained at the food site. Cochliomyia macellaria larvae showed an intermediate response; about 50% dispersed no farther than 2.4 m and none moved more than 5.1 m; 40% remained at the food source.

Godoy et al. [2] observed the oscillation in pupal frequency as a function of distance from the feeding substrate for C. megacephala and C. putoria. According to Boldrini et al. [8], these oscillations would be a consequence of larval aggregations in certain sites of the pupariation substrate. Smaller larvae travel greater distances to pupariate or in search of an additional food source. Postfeeding dispersal in blow fly larvae under laboratory conditions is typically very short but may extend for hours or even days in the field [19]. The postfeeding larval dispersal behavior and the consequent pattern of spatial distribution of pupae can be a function of greater or lesser larval susceptibility to predator or parasitoid attacks [7,11,20-22]. Another obvious fact is that the larvae, particularly those of C. rufifacies, do not distribute themselves uniformly into the arena (Figures 1 and 2) but concentrate closer to the food source at the center. Similar observations were made by Gomes and Von Zuben [18] for C. albiceps. Student’s t test along with correlation test was performed to analyze the correlation among variables [23]. The correlation between distance and weight is -0.960 (p=0.0024) and –0.898 (p=0.006) for C. megacephala and C. rufifacies respectively, which indicates an inverse relationship. When the Student’s t test was applied, a value of -4.880 and -2.894 was obtained respectively for the two species which again means that the farther the larvae are from the centre, the lesser they weigh. Considering the variable distances for both the species, a Student’s t test value of 69.68 was obtained, indicating that the mean distances for the two species are not comparable. Similarly, considering weight, Student’s t value of 6.217 indicates that the weight averages for the two species are not close. 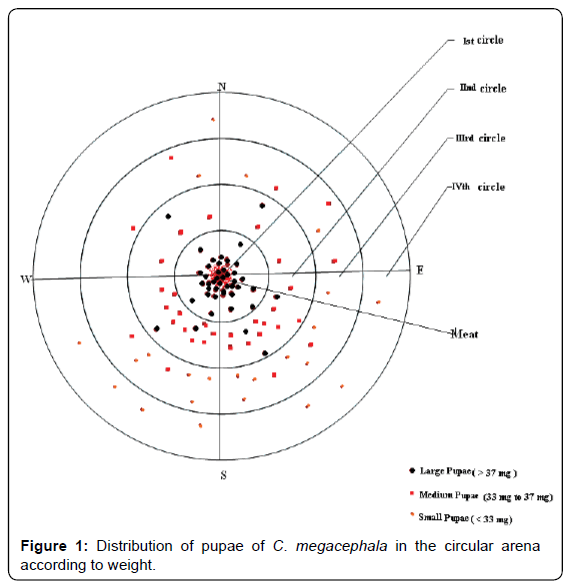 Figure 1: Distribution of pupae of C. megacephala in the circular arena according to weight. 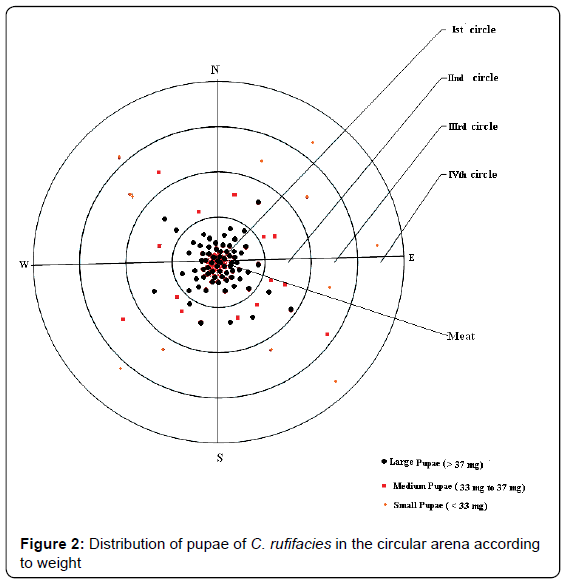 Figure 2: Distribution of pupae of C. rufi facies in the circular arena according to weight

Studies on the larval dispersal could have important implications for medico-criminal investigations as the presence of larvae and pupae in or around a human corpse could help estimate the time interval between the person’s death and the moment the body was found, commonly called the minimum postmortem interval (PMI). The comparison of larval dispersal between the two species under consideration shows that the larvae of C. megacephala are more dispersive than that of C. rufifacies. Secondly, most larvae of C. rufifacies remained near the food site as also observed by Greenberg [14]. A reason for this behavior could be the carnivorous habits of C. rufifacies larvae that predate upon other larvae. Correct estimation of the PMI is one of the most important aspects of legal medicine [24], and it could be underestimated if the dispersing larvae are not taken into account [25]. It can be concluded that the investigator should be careful while drawing conclusions about minimum PMI on the basis of size of those larvae that have dispersed for considerably long distances. They may actually be representing the lot of starved larvae that left the corpse in search of a new food source because of exhaustion of supply at the primary corpse. The time taken for such dispersal should also be taken into consideration if pupae found away from the corpse are used to determine the minimum time since death. Similarly, the possibility of migration of maggots from other carrion decaying nearby should be thoroughly probed before arriving at estimation of minimum PMI.

Madhu Bala is thankful to Council of Scientific and Industrial Research, for providing financial assistance for this research in the form of Junior Research Fellowship (S. N0 09/140(141)2006 EMR-I).