Copyright: © 2013 AKPINAR EE, et al. This is an open-access article distributed under the terms of the Creative Commons Attribution License, which permits unrestricted use, distribution, and reproduction in any medium, provided the original author and source are credited.

Community-Acquired Pneumonia (CAP) is an important cause of morbidity and mortality worldwide [1] The mortality rate of CAP ranges from less than 5% among outpatients to 12% among hospitalized patients [2]. The need for an intensive care unit (ICU) is also an important problem for clinicians to overcome during the course of CAP [3,4]. CURB-65 (confusion, urea nitrogen, respiratory rate, blood pressure, ≥ 65 years) and Pneumonia Severity Index (PSI) are the most frequently used scoring scales to assess the disease severity [5,6]. These scoring tools are useful to decide between hospitalization and outpatient treatment with an oral antibiotic. However, their accuracy is lower regarding the evaluation of mortality and need for ICU treatment [4,7]. In recent years, the role of several biomarkers, such as C-Reactive Protein (CRP) and procalcitonin, have been studied to predict the severity and prognosis of CAP and its correct diagnosis and microbiological etiology [8].

Serum albumin concentration has been used as an indicator of nutritional status for years [9]. Hypoalbuminemia was related with poor outcome in several clinical conditions, including CAP [9-11]. In a recent study by Lee et al., it was reported that albumin was associated with 28-day mortality in patients hospitalized with a CAP diagnosis [12]. The inflammatory reaction was reported as a primary reason for hypoalbuminemia in elderly patients with CAP [13]. The Blood Urea Nitrogen (BUN) level is an important biochemical parameter showing renal hypoperfusion. It is one of the contributing parameters for both the CURB-65 and PSI severity scoring scales. Previous studies have shown that patients with CAP who had higher BUN levels [14,15] and lower albumin levels [6,15] had higher mortality rates. It has recently been reported that the BUN/Albumin (BUN/Alb) ratio was an independent predictor for both mortality and the severity of CAP [16].

The study included 216 consecutive patients hospitalized for CAP between the dates of January 2011 and June 2012. This was a prospective observational study. Patients who were ≥ 18 years, admitted from the community, had at least two clinical signs and symptoms related to pneumonia (fever > 38ºC, cough, chest pain, dyspnea, or crackles on auscultation), and presented new infiltration on chest radiography were included in the study. Patients were excluded if they were immunocomprimised (i.e., using immunosuppressive therapy, having a human immunodeficiency virus infection, malignancy, or undergoing chemotherapy), had been hospitalized and/or used any antibiotic in last two weeks, or had chronic renal or liver failure. The design of the study is shown in Figure 1. The study was approved by the local ethics committee, and informed consent was obtained from all patients included in the study. 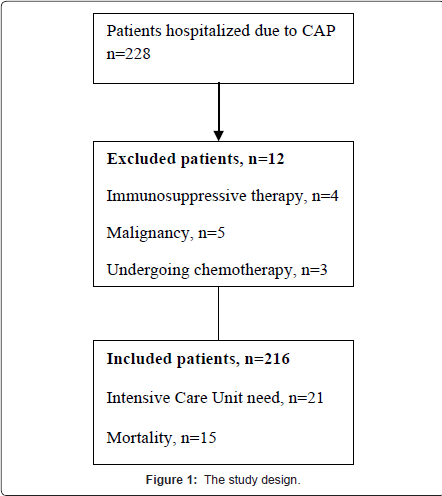 Venous blood samples were obtained from patients upon admission before starting antibiotic treatment. Hemogram measurements and biochemical analyses to measure the levels of albumin, CRP, BUN, creatinine were made, and the ratio of BUN/Alb was calculated for all participants.

A detailed medical history of patients was recorded. Comorbidities [i.e., Chronic Obstructive Pulmonary Disease (COPD), Diabetes Mellitus (DM), Congestive Heart Failure (CHF), bronchiectasis, malignancy] were noted. The severity of CAP was assessed using the CURB-65 and PSI for all patients [5,6]. A blood culture was performed for patients who had a fever >38°C. An arterial blood gas analysis was performed. Emprical antibiotic treatments were started according to the recommendations of the Turkish Thoracic Society [17]. The need for ICU was decided according to ICU criteria of Turkish Thoracic Society (Table 1) [17]. Thorasynthesis was performed to the patients who had pleurisy upon admission or who developed pleural effusion during treatment to evaluate the nature of the accompanying fluid. Patients who developed respiratory failure (paO2<60 mmHg and/or paCO2> 45 mmHg) during the course of the disease were also noted.

*The patients who had at least 1 minor or 3 minor criterion were accepted to intensive care unit (ICU).

The endpoints of the study were the requirement of ICU, development of complications [e.g., parapneumonic effusion (exudative pleurisy on admission or during antibiotic treatment) or respiratory failure], or mortality within one month.

Continuous data were described as the mean±standard deviation, and median (minimum-maximum) categorical data were described as frequences and percentages. Differences between groups were evaluated by Student’s t test and Mann Whitney U test depending of the normality of continuous data. A Chi-Square test or Fisher’s Exact test were used for categorical data when applicable. A Spearman correlation coefficient was used to evaluate the relationship between continuous variables. Logistic regression with backward elimination was used to evaluate independent risk factors or the development of complications and need for ICU treatment. The results were expressed as odds ratios (OR) with 95% Confidence Intervals (CI). Variables significantly associated with the development of complications or need for ICU treatment at the 0.20 levels in the univariate analysis were considered in a backward elemination of variables in a logistic regression. IBM SPSS Statistics for Windows Version 20 was used for all analyses. A p value <0.05 was considered statistically significant.

In total, 216 patients (117 male, 99 female) were enrolled in the study. Demographic properties and severity of pneumonia (CURB-65, PSI) laboratory findings are shown on Table 2. Complications developed in 19 patients (16 parapneumonic effusion, 3 respiratory failures). Twentyone (10%) of the patients who were hospitalized needed ICU treatment. The one-month mortality rate of CAP in our population was 6.7%. The levels of albumin of patients who were inpatient, non-ICU treated were significantly higher than the albumin levels of patients who required treatment in the ICU (p<0.0001). Microbiological investigations were conducted in 53 (24.5%) of patients. Isolation of pathogen bacteria was achieved in 25 (11.57%) of these patients. Table 3 shows the pathogen bacteria isolated from cultures. 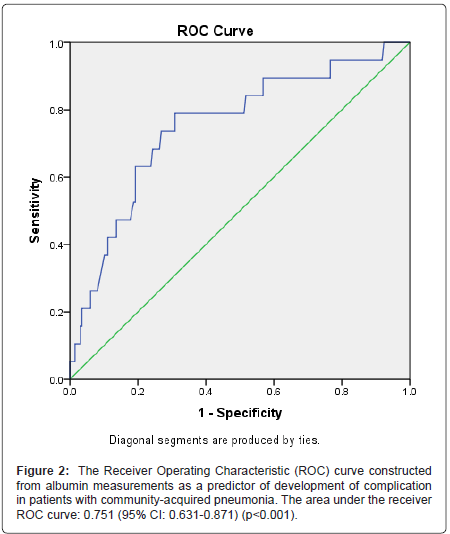 Figure 2: The Receiver Operating Characteristic (ROC) curve constructed from albumin measurements as a predictor of development of complication in patients with community-acquired pneumonia. The area under the receiver ROC curve: 0.751 (95% CI: 0.631-0.871) (p<0.001).

The factors related to mortality were also investigated. Age (<65 years vs. ≥65 years), gender, BUN, BUN/ Alb ratio, albumin, paO2, and the presence of co-morbidities, including COPD, bronchiectasis, DM, malignancy did not affect mortality of the population studied. Patients who had more severe pneumonia (CURB-65 = 2 vs. CURB-65 > 2, PSI=3 vs. PSI>3) needed ICU treatment (p=0.006, p=0.003, p=0.001). Because the rate of mortality was low, logistic regression analysis could not be done for mortality. The factors influencing mortality and the development of complications are shown in Table 4 and 5.

Table 4: The factors influencing the development of complications and mortality.

Table 5: The laboratory parameters influencing the development of complications and mortality.

Table 6: The factors influencing the need for intensive care unit. 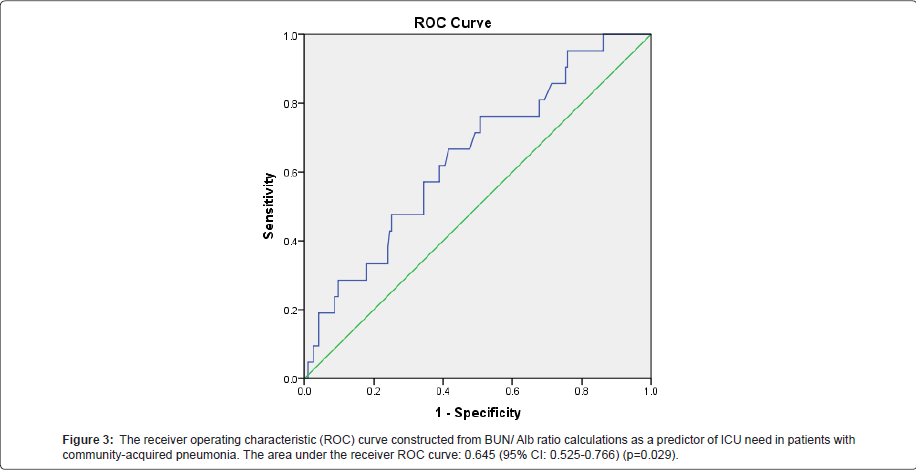 Figure 3: The receiver operating characteristic (ROC) curve constructed from BUN/ Alb ratio calculations as a predictor of ICU need in patients with community-acquired pneumonia. The area under the receiver ROC curve: 0.645 (95% CI: 0.525-0.766) (p=0.029). 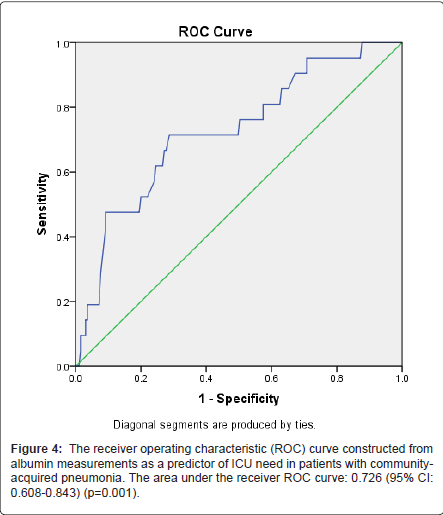 Figure 4: The receiver operating characteristic (ROC) curve constructed from albumin measurements as a predictor of ICU need in patients with communityacquired pneumonia. The area under the receiver ROC curve: 0.726 (95% CI: 0.608-0.843) (p=0.001).

Biomarkers, including procalcitonin and B-type natriuretic peptide were found to be predictive for the prognosis of CAP [18,19]. But measurement of these biomarkers is not easily reachable and cheap. However, albumin and BUN levels are routinely measured in all hospitalized CAP patients.

The rate of the albumin synthesis is decreased in the acute phase of inflammation. The endotoxin from Gram-negative bacteria, cytokines like IL-6, chemokines cause capillary leakage of albumin. Hypoalbuminemia is a predictor of worse prognosis in hospitalized and critically ill patients [20]. Lee et al. [12] reported that albumin was associated with mortality in patients hospitalized due to CAP. Similarly, the serum albumin level upon admission was found to be predictive for mortality in CAP patients [6,21]. In our study, albumin was not an effective factor for one-month mortality in patients with CAP. But, the low albumin level was strongly associated with increase in development of complication and ICU need. The addition of albumin level of CAP patients to the parameters of severity scales (CURB-65 and/or PSI) may reinforce their predictive role in prognosis of the disease.

Previous studies have shown that patients with CAP who had higher BUN levels had higher mortality rates [6,14]. A high BUN level is one of the components of both the CURB-65 score and PSI [5,6]. BUN levels show a decrease in renal perfusion and indirectly predict the severity of pneumonia. The patients who have pneumonia are usually dehydrated that results from increase of BUN excretion from the kidneys. We investigated whether the ratio of these two easily measurable parameters (BUN and albumin) predicts the prognosis of CAP or not. In our study, the BUN/albumin ratio only predicted the ICU need in CAP patients.

Recently, Ugajin et al. [16] proposed that the BUN/Alb ratio is an independent predictor for both the severity of CAP and resulting mortality. Our study population had relatively milder disease. The ratio of patients who had greater than 2 points according to CURB-65 scale was 25%. This ratio was 40.6% in the study of Ugajin et. al. [16]. The mortality rate also was lower in our study (6.7% vs 10.8%). These differences may be effective in contadictory results of the two studies about the role of the BUN/Alb ratio in the prediction of prognosis of CAP.

Lee et al. [12] found a 28-day mortality rate of 13.7% in patients hospitalized due to CAP. One-month mortality was lower (6.7%) in our study. Two factors of this study may have been more effective against mortality. First, emprical antibiotic treatment was applied following the national guidelines for CAP. Second, most of the patients included in our study had relatively milder pneumonia according to their severity scores.

This study had some limitations; it contained the patients with CAP from only one center. The patient population may not be representative for all CAP patients. Most of the patients who were included to the study had relatively milder disease. This may be effective on the predictive role of BUN/Alb ratio in the course of CAP.