Copyright: © 2013 Hansen P, et al. This is an open-access article distributed under the terms of the Creative Commons Attribution License, which permits unrestricted use, distribution, and reproduction in any medium, provided the original author and source are credited.

Therapy initiation at confirmation of HIV-infection is now medically preferred, which implies that, with adequate financial support, the diagnostic use of T-helper lymphocyte parameters will shift from ART enrollment to tracking therapeutic response. Of the two main therapy tracking parameters, CD4% and the CD4 count, the CD4% parameter is less prone to non-HIV influences. For example, normal CD4% values do not change at all during 17 years of healthy childhood maturation while the CD4 count falls by approximately a factor of three. In mature, HIV-stable persons the CD4 count randomly fluctuates by approximately 12% from day to day in health and by 30% in severe HIV-infection; while CD4% fluctuates by one-third of these amounts respectively. Despite indications such as these that CD4% is the best cell proxy for HIV-related immune status, CD4% is not delineated in adult therapy guidelines and not universally measured by smaller commercial cytometers in resource challenged areas. With only the CD4 count available how might one determine whether a result was subject to factors that would call for a repeat count at a later time? We showed in two populations (African and American) that the normality of the total lymphocyte count was an indicator of the utility of a given CD4 count. High or low lymphocyte counts were strongly related to a high or low CD4 count, which means that factors such as stress and microbial infection that are known to temporarily affect the total lymphocyte count will affect the CD4 count. During HIV therapy the total lymphocyte count should be inclined to normal values and a lymphocyte count that is high or low relative to a patient’s history would call for a repeat CD4 measurement at a later time and, more importantly, qualify the repeat measurement.

Studies have shown that CD4% is an independent predictor of HIV progression and owing to its stability a useful marker for disease stage [1-3]. The maturation of a healthy child is an example of a long-term physiological change that demonstrates the superior temporal stability of CD4%. The CD4 count for children has a reference range that is markedly age dependent; dropping progressively by a factor of 3 from newborn to 17 years. In contrast, CD4% has a constant reference range over this same period of maturity [4,5]. The observation that CD4% harmonizes the reference ranges for newborns, children, and adults is consistent with the hypothesis that CD4% is a more fundamental parameter than the CD4 count in the face of progressive physiological change.

Physiological factors also cause both the CD4 count and the CD4% to change quasi-cyclically during a 24 hour day for healthy and HIV-infected populations. In healthy controls, the CD4 count changes by approximately 60% from early morning nadir to late at night maximum, while the change in CD4% is 6-fold less [6]. This example of superior CD4% stability provides evidence that it is a more fundamental parameter than the CD4 count in the face of very short term physiological changes within a given day.

Because these diurnal cycles are only quasi-cyclical and are imperfectly repeated, the CD4 count and CD4% exhibit day to day variations even when measured at the same time of day. Such day to day fluctuations in CD4 count range from approximately 12% in healthy persons to approximately 30% for severe HIV infection. In contrast, day-to-day fluctuations in CD4% range from approximately 5% to 10% for these same persons [6,7]. These findings have been recently confirmed with modern laboratory reference systems [8]. The attenuated day-to-day fluctuation of CD4% compared to the CD4 count provides additional evidence that CD4% is a more stable and plausibly more fundamental immune status parameter than the CD4 count.

Recently in this journal, Achhra et al. [9] assumed CD4% to be the best cell-based proxy for HIV disease stage and showed that, with this assumption there could be a very wide range of CD4 count for any given CD4% and that CD4 count thresholds for disease management should not be used interchangeably among different ethnic populations. They found an Asian population to have lower CD4 counts than a Caucasian population for each narrow stratum of CD4%. This study calls into question the sole reliance on CD4 counts for HIV staging and therapy management and raises interest in the utility of CD4%.

Our new study shows that if CD4% is taken to be the best available cell-based proxy for HIV disease stage, as suggested by Achhra et al. [9], then the wide CD4 count range they observed for any given CD4% is caused by the wide range of total lymphocyte counts that are associated with that value of CD4%. This has implications for HIV staging in large populations. Adult testing and treatment guidelines for the developing world cite the CD4 count alone. Until recently, persons with no access to central laboratory facilities have had limited access to devices that measure CD4%; and when CD4% is available it is frequently used only as ancillary information (the exception being for children). An uncritical reliance on the CD4 count without considering the total lymphocyte count is called into question by our study. 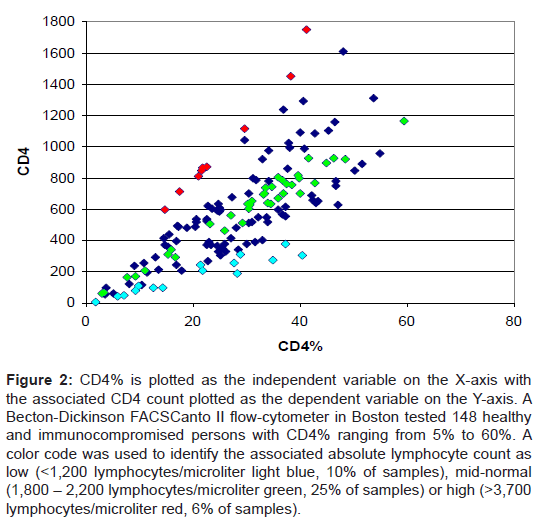 Figures 3 and 4 are similar to Figures 1 and 2 except we indicate those samples that were above or below the reference range for the total lymphocyte count in red [10,11]. 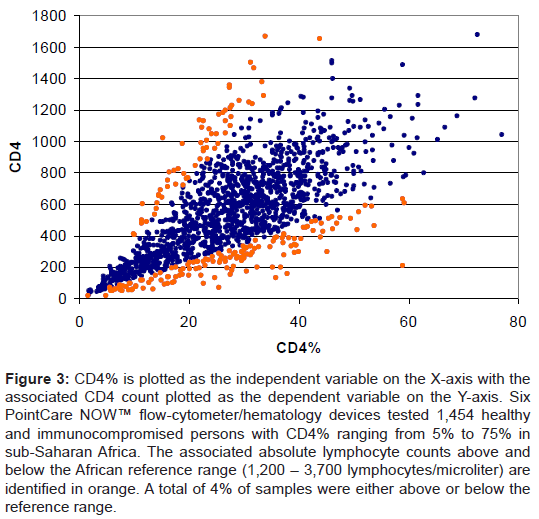 Figure 3: CD4% is plotted as the independent variable on the X-axis with the associated CD4 count plotted as the dependent variable on the Y-axis. Six PointCare NOW™ flow-cytometer/hematology devices tested 1,454 healthy and immunocompromised persons with CD4% ranging from 5% to 75% in sub-Saharan Africa. The associated absolute lymphocyte counts above and below the African reference range (1,200 – 3,700 lymphocytes/microliter) are identified in orange. A total of 4% of samples were either above or below the reference range. 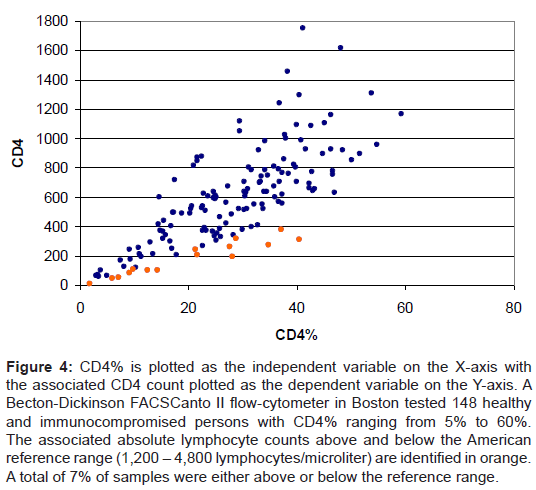 Figure 4: CD4% is plotted as the independent variable on the X-axis with the associated CD4 count plotted as the dependent variable on the Y-axis. A Becton-Dickinson FACSCanto II flow-cytometer in Boston tested 148 healthy and immunocompromised persons with CD4% ranging from 5% to 60%. The associated absolute lymphocyte counts above and below the American reference range (1,200 – 4,800 lymphocytes/microliter) are identified in orange. A total of 7% of samples were either above or below the reference range. 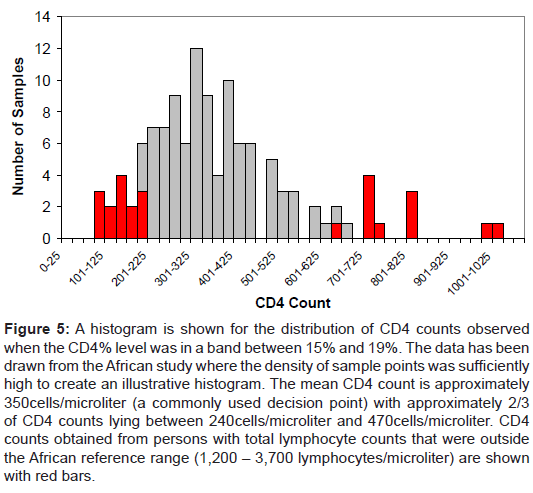 Figure 5: A histogram is shown for the distribution of CD4 counts observed when the CD4% level was in a band between 15% and 19%. The data has been drawn from the African study where the density of sample points was sufficiently high to create an illustrative histogram. The mean CD4 count is approximately 350cells/microliter (a commonly used decision point) with approximately 2/3 of CD4 counts lying between 240cells/microliter and 470cells/microliter. CD4 counts obtained from persons with total lymphocyte counts that were outside the African reference range (1,200 – 3,700 lymphocytes/microliter) are shown with red bars.

Our report raises important considerations concerning the therapeutic management of HIV in worldwide, remote locations where CD4% and the total lymphocyte count are not routinely available. Recognizing that the CD4 count is affected by many transient factors, guidelines for adult antiretroviral therapy (ART) management frequently suggest that no therapy decision be made without a repeat CD4 count measurement [13]. But how is one to know that the repeat measurement is any more reflective of a change in HIV-related immune status than was the initial measurement? Our report strongly supports the hypothesis that CD4 counts are highly influenced by total lymphocyte counts and, by extension, the variability and degree of abnormality of a repeat total lymphocyte count in a given patient can be used to determine whether the repeat CD4 count is confirmatory or not.

Quantitative studies are required to determine to what extent the number of circulating CD4 lymphocytes for an individual patient in real life has been influenced by the immune response of all lymphocytes to non-HIV related factors. With properly managed ART, HIV is a long-term disease, during the course of which competent lymphocytes continue to perform immunologic tasks; fluctuating substantially in numbers as they do so. If CD4 counts are utilized as parameters for long-term disease progression or ART monitoring these fluctuations must be better understood, or as a practical matter, coupled with CD4% as a possible future international standard for HIV disease management. Patients residing in rural settings should have the same access to total lymphocyte counts or CD4% as have their counterparts living near central laboratories.

The analysis and discussion in this communication strongly supports the proposal that even without computing or directly measuring CD4%, clinicians may more confidently answer the question as to whether they have performed sufficient confirmatory CD4 testing by consulting the repeat outcome of confirmatory total lymphocyte counts on another day. A markedly unstable or abnormal total lymphocyte count would indicate the need for more repeats until lymphocyte stability or normality is reached.