Copyright: © 2012 Dip N, et al. This is an open-access article distributed under the terms of the Creative Commons Attribution License, which permits unrestricted use, distribution, and reproduction in any medium, provided the original author and source are credited.

Bladder cancer (BC) is the second most common malignancy of the urinary tract. Approximately 383,300 new cases are estimated for 2011 [1]. Ninety percent of BC are urothelial carcinomas (UC), previously named transitional cell carcinomas, and the majority are papillary lowgrade, non-muscle invasive that recur in up to 80% of cases but rarely progress to muscle invasion [2-3]. In contrast, 10 to 20% of tumors are muscle invasive at diagnosis, and 50% of patients die from metastatic disease [4].

The molecular pathways underlying the main two distinct types of UC, low-grade, non-muscle invasive, and high-grade, muscle invasive [2,5] have been investigated to identify new potential markers for diagnosis, disease monitoring, prognosis and development of new targeted therapies [2,6,7]. The most common genetic alteration of BC associated with low-grade and stage neoplasias is an activating mutation of the fibroblast growth factor receptor 3 (FGFR3) gene [8- 9], whereas mutations in the p53 and retinoblastoma (RB1) genes have as being identified as characteristic of the carcinogenesis pathway for high grade invasive disease [5,7,10,11].

The FGFR3 gene belongs to the growth factor receptor family related to the tyrosine kinase signaling pathway, which plays an important role in embryogenesis, development, angiogenesis, wound healing, tissue homeostasis and tumorigenesis, regulating cellular proliferation, migration and apoptosis [9]. Mutations are the primary phenomenon related to FGFR3 dysfunction allowing its ligand-independent operation [9,12] and the identification of FGFR3 dysfunction has been purposed as a new tumor marker [5,10,13]. Other events that may lead to the over-expression of the FGFR3 including alterations in the epigenetic control including DNA methylation, histone acetylation and abnormalities in the expression of microRNAs can also play crucial roles in the development and progression of BC [14].

MicroRNAs are members of small single-stranded regulatory RNAs (21-25 nucleotides) that can suppress the translation or promote the degradation of mRNA regulating the expression of target genes, including transcription factors, oncogenes and tumor suppressor genes. MicroRNAs have been reported to be differentially expressed in several types of cancers. Currently, there are more than 700 miRNAs described in humans, and up to 30% of genes are thought to miRNA regulated [15]. MicroRNAs are involved in cell development, differentiation, apoptosis, tissue homeostasis and several metabolic pathways [16-19], and they have been related to carcinogenesis acting as negative regulators of genes related to cancer as typified by the effect of miR-15a and miR-16-1 on BCL2 mRNA, miR-143 and miR-let7c on RAS mRNA and miR-21 on p53 mRNA [20-23].

Recently authors have demonstrated that the FGFR3 gene is a target of microRNA 100 (miR-100), and the down-regulation of FGFR3 could be involved in the development of low-grade, non-muscle invasive UC [23,24]. Our aim was to study the expression of miR-100 and the FGFR3 gene in low-grade, non-invasive UC to validate a new carcinogenesis pathway that may be involved in the development of the disease and that could potentially be used as a new biomarker.

Thirty low-grade non-invasive pTa urothelial carcinomas obtained from patients who underwent transurethral resection were the subject of the study. Eighty-seven percent (26/30) of patients were male; the mean age was 67.6 years old, ranging from 47 to 82. As control, we used normal bladder tissue from five patients who had undergone retropubic prostatectomy to treat benign prostatic hyperplasia. All patients provided informed consent and the study design was approved by the Institutional Board of Ethics protocol 10/176.

A subsection of the all the specimens were fixed in 10% formalin routinely processed and stained with hematoxylin and eosin for histological examination. Only urothelial low-grade (2004 WHO/ ISUP) pTa (2010 AJCC/TNM) tumors were included in the study.

RNA and miRNA extraction and amplification

Part of the resected tissue was immediately frozen and stored at -80oC. At the time of the RNA and microRNA extraction, a fragment of the frozen tissue was fixed in 10% formalin, routinely processed and embedded in paraffin and a slide was stained with hematoxylin and eosin to guarantee the presence of tumor in at least 75% of the specimen.

Expression profiles of miR-100 and mRNA FGFR3 were obtained by relative quantification determined using the 2-ΔΔct method. Reactions were conducted in duplicate using β-2 microglobulin (B2M) as an endogenous control for mRNA analysis and RNU-43 and RNU-48 as endogenous controls for miRNA analysis.

The distribution of the expression levels of the miRNAs was skewed; therefore, the data were log transformed for analyses. Results are presented as geometric means with a 95% confidence interval (95% CI). 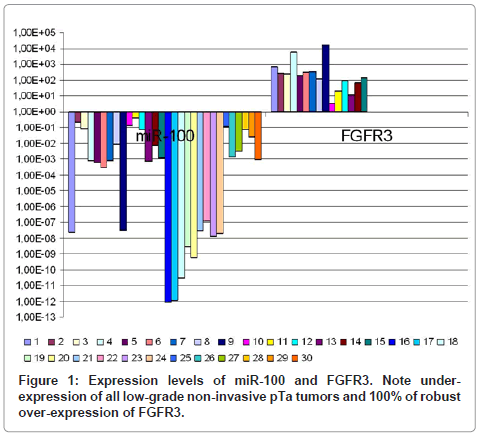 Figure 1: Expression levels of miR-100 and FGFR3. Note underexpression of all low-grade non-invasive pTa tumors and 100% of robust over-expression of FGFR3.

Molecular pathways are directly involved in the biological behavior of BC and are able to predict disease evolution prior to its complete presentation. Our study revealed that 100% of low-grade pTa UC showed under-expression of miR-100 (30/30) and over-expression of FGFR3 (15/15), showing a strict association between two events. We sought to prove that FGFR3 is a target of miR-100, and that FGFR3 over-expression is due to the under-expression of miR-100, which is a different mechanism related to BC carcinogenesis that could be used in clinical practice. Catto et al. (2009), who studied 22 cases of low-grade pTa UC, found the same result and proved FGFR3 as a target for miR- 100 in vitro models.

The FGFR3 mutation in BC was initially described in 1999 by Cappellen et al., who identified mutations in 35% of the tumors they examined. FGFR3 can be abnormally activated through two mechanisms. The first mechanism is the translocation t (4;14) (p16.3; q32) that results in an increase in mRNA, as has been described in multiple myeloma [26]. The second mechanism is an anomalous overactivation of the receptor by a point mutation [27]. Currently, the FGFR3 point mutation is well established in BC carcinogenesis; it is present in more than 70% of low-grade non-invasive UC [5,9,13,23], and can be caused by tobacco smoke and contact with aromatic amines [28,29]. These mutations activate the tyrosine kinase domain, lowering the specificity for the ligand, promoting dimerization independent of the ligand or inducing autophosphorylation of the intracellular domain.

In contrast, approximately 30% of low-grade pTa UC do not have the FGFR3 mutation suggesting that other regulatory pathways may be involved in the pathogenesis of the tumor. Few studies have evaluated alternative mechanisms of FGFR3 dysfunction in BC [13,23].

It is important to clarify the mechanisms that may be involved in the dysfunction of miR-100 expression. Blick et al. (2011) recently demonstrated that hypoxia could up-regulate FGFR3 and concomitantly down-regulate miR-100 in an HIF-1a dependent manner in BC. In addition, epigenetic events such as methylation could be involved in the silencing of miR-100 [31].

We hypothesize that mechanisms affecting miR-100 expression could be the first molecular event in low-grade pTa UC development, and there is a need for further studies to confirm the precise role of miR-100 as a controller of FGFR3 in BC. If these events precede FGFR3 mutation, we propose the search for miR-100 under-expression as a new tumor diagnostic and prognostic marker.